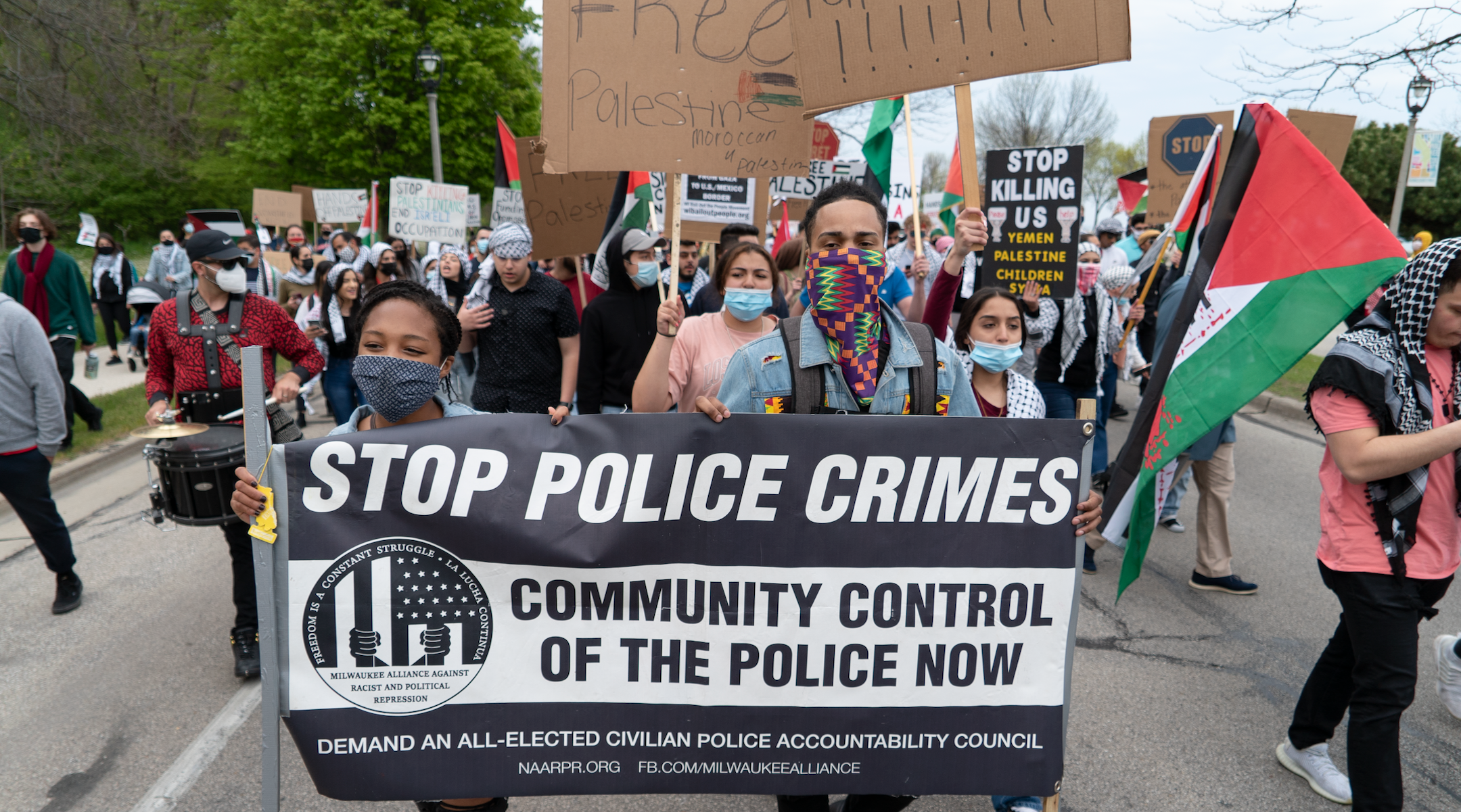 At a pro-Palestinian march on Milwaukee's Bradford Beach, protesters conflate the movement to end police brutality with calls to "free Palestine," May 18, 2021. (Joe Brusky/Flickr Commons)
Advertisement

This article originally appeared on The New York Jewish Week.

Just a few weeks ago, the streets of New York City were filled with thousands of people shouting “intifada” while also claiming “Black Lives Matter.”

In that same period, a violent pro-Palestinian mob attacked Jews on the streets of New York. Others violently assaulted Jews at a restaurant in Los Angeles, vandalized European synagogues, and targeted Jews in Chicago and Montreal.

Normally, unprovoked attacks against another group of people would be widely condemned and its perpetrators called out for what they are. But these attacks were “tied” to the Israeli-Palestinian conflict, so many on the left defended them in the name of freedom of assembly and freedom of speech — or worse, by suggesting that the victims somehow deserved it.

In light of the recent violence in Israel and Gaza, woke warriors today are rehashing their charges of “apartheid,” claiming Israel is a “white supremacist” society seeking to subvert and cleanse its Palestinian population. But something far more insidious is happening as well in Jewish communities all over the world: Jew haters are using the conflict in the Middle East as an excuse to unleash their unabashed hatred of Jews wherever they dwell.

How can honest advocates for justice condone such violent attacks against a people?

The answer is a simple one, though many refuse to accept it: Antisemitism is socially acceptable among the woke. Or to put in “boomers” terms, apparently Jewish blood is still cheap. Nearly 80 years ago, Jewish children were burned in ovens under German state-sponsored terrorism while the world shrugged. The world is still shrugging as Israeli children go to sleep in bomb shelters, fearful for their lives and well-being.

Israelis come in all colors and creeds. Look at Lod, Haifa and Acre, the multiethnic, multicultural cities of Arabs and Jews torn apart by rioting during last month’s conflict. It is because Israel strives to be a country “of all its inhabitants” — including 2 million Arab citizens — that the unrest is being treated as an internal crisis, and politicians have condemned Jewish vigilantes and Arab rioters.

Israeli Jews are roughly divided between Ashkenazi Jews with roots in Europe and Sephardi or Mizrahi Jews with roots around the Mediterranean and the Middle East, who in turn were descendants of Jews from the Holy Land going back hundreds and thousands of years. Claiming that Jews are white, European “colonizers of Israel” — as woke activists frequently do — is about as historically honest as saying Native Americans don’t have a right to live in the United States.

Unfortunately, segments of the Jewish population are some of the most vocal supporters of this fraudulent ideology, trading our people for acceptance, forgetting our own history for the expediency of being politically correct. Jewish Currents magazine would have us believe that Israel still needs to perform “teshuva” (repentance) for providing safe haven to Jews in 1948 (forget that countless Arab countries expelled their Jews then). IfNotNow questions whether Zionism — the movement for Jewish self-determination, the movement that gave birth to a country where more than 7 million fellow Jews now live — should be “a core part of our [Jewish] identity.” Jewish Voice for Peace considers Zionism “a false and failed answer” to centuries of murderous antisemitism.

It seems that portions of our people have forgotten why Israel was established in the first place: to serve as a safe haven for Jews in our own ancestral homeland. Cleary that need is as vital today as it was in the 1930s and before. Instead, the Jewish woke equate tikkun olam with intifada and in so doing pervert Jewish values to a sickening extreme, aligning themselves not just with Palestinians with legitimate grievances and a vision for a shared future, but with people who seek the destruction of the Jewish people wherever they may live. (Note: Hamas doesn’t just want Israel Judenrein, but the whole world.)

Of course, Jewish fanaticism is abhorrent. Like any democracy, Israel has its religious and political extremes. As a rabbi I have spoken against the prime minister’s inclusion of militant parties in his coalition and denounce bigotry and violence from wherever it may stem. The current anti-Zionist moment is not about that. It is about rejecting one people’s claims to a land in favor of another’s, a mirror image of the “apartheid” label they attach to Israel.

Of course, Palestinian lives matter. Even Alan Dershowitz said that much before Bernie Sanders realized he could co-opt a woke slogan. How profoundly unfortunate it is that the Palestinian leadership continues to undermine its own people’s well-being, repeatedly rejecting peace accords with Israel, and most recently, refusing its own people democratic elections. Let’s remember that the Palestinian prime minister is still serving a four-year term that started in 2006.

The Israeli-Arab conflict is a decades-long, complex one, but woke culture sees no nuance, only supremacist and victim. Many of the leading lights of the Democratic Party amplify this mess. If only Bernie could listen to Bernie from 2014 telling protesters that Hamas uses Gazan children as shields. Common sense isn’t what it used to be.

And of course, Judaism advocates for a certain kind of “wokeness.” Judaism instructs us to pursue justice constantly. But the prophets of the Hebrew Bible were not only the most adamant in calling for a righteous society but in creating a generous one, too. “Do justice, love kindness, walk humbly with your God,” the prophet Micah charged. It seems that today’s generation has forgotten Micah’s last sentiment. Woke culture is in desperate need of humility, admitting that truth does not dwell in Twitter nor the Messiah in a meme.

If the “woke community” really sought to awaken, it would realize that Jew hatred is the oldest of hatreds. Of all the countries in the world with egregious human rights records, how is it that the State of Israel, which has Arab members of Knesset and a LGBTQ parade in Jerusalem, is so often singled out by the United Nations for reprimand? Which other country on the planet would tolerate a daily barrage of missiles aimed at its civilian populations? How can one justify the assault on non-Israelis in cities worldwide in the name of ending the “occupation”?

It is time for the world to “wake up” and recognize when defense of Palestinian rights becomes a one-sided, distorted, often violent assault against Jews, plain and simple. People of conscience and especially Jews ought to know better.