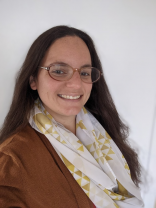 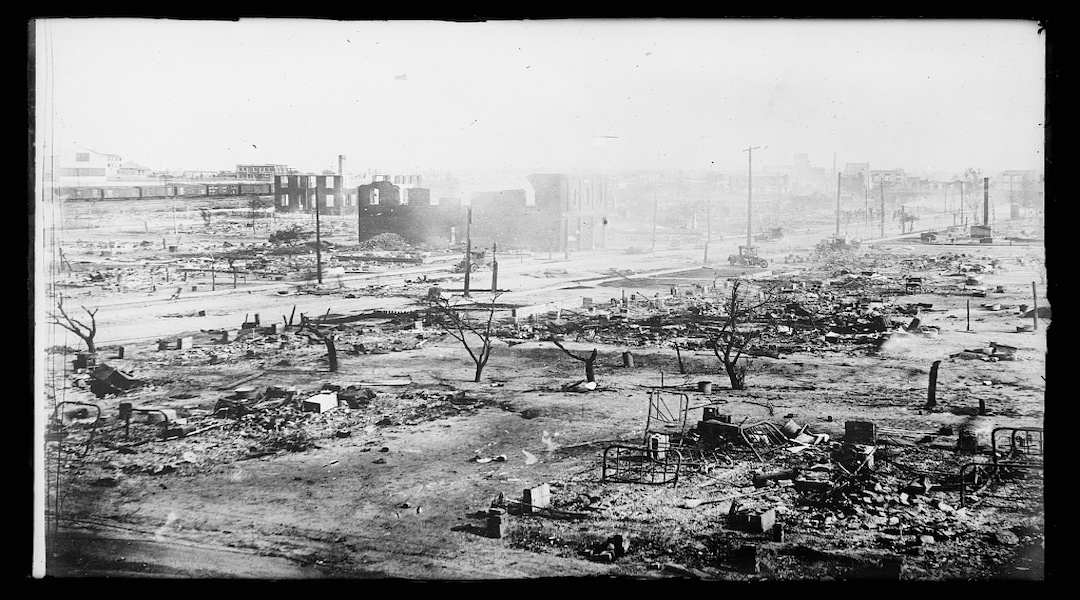 A contemporary photograph shows the ruins of the Greenwood District in Tulsa, Okla., after a white mob and local law enforcement attacked and killed hundreds of the neighborhood's Black residents, June 1921.(Library of Congress)
Advertisement

(JTA) — My grandpa once told me a story about when my great-grandparents were on a steamship emigrating from Ukraine to Cuba in the 1920s, shortly before my grandpa was born. As the story went, my great-grandmother saw a Black man for the first time and she screamed and hid.

My grandpa told the story to me only once, when I was probably about 10 years old, but the image of my great-grandmother seeing a Black man and screaming stuck with me.

For years now, as a scholar of Yiddish literature who focuses on American Yiddish representations of race, I have been turning the story of that encounter around in my head. I have been thinking about the European racist imagery that my great-grandmother might have been exposed to long before she ever encountered a Black person. Merle Bachman writes about this in her analysis of Avrom Reyzin’s poem “A Little Negro” in her book “Recovering Yiddishland”: the way that the Yiddish poet is taken aback by the very appearance of a Black person, whose body in its shocking unfamiliarity produces an instantaneous moment of judgment and fear.

My grandpa’s story is of course resonant with baseless accusations of Black male rapaciousness and white women’s vulnerable sexual purity that have been at the heart of so much white supremacist violence, which is why it is such an uncomfortable story for me to confront.

I have also been thinking about how this “Yiddish gaze” on Blackness — as I wrote in a recent chapter for a book on Judaism, race and ethics — is nevertheless distinct from a broader American white perspective. Yiddish speakers bring to it not only linguistic and cultural outsiderness, separate cultural references and understandings of the world, but also their own traumas. My great-grandmother left Ukraine in the 1920s, likely fleeing the Ukrainian pogroms of 1919-21 in which anywhere between 6,000 and 25,000 Jews were massacred, and perhaps that feeling of vulnerability had a role to play in her understandings of power, powerlessness and race.

In his book “Pogrom: Kishinev and the Tilt of History,” Steven Zipperstein describes the earlier violent anti-Jewish rampage that broke out in late-czarist Russia in April 1903. Over three days of violence, 49 Jews were killed and 600 raped or wounded, and more than 1,000 Jewish-owned houses were ransacked and destroyed. The event, he explains, played a huge role in modern Jewish self-understanding — covered heavily in American and world newspapers, the event provided impetus for Jewish nationalism, Jewish relief efforts and Jewish emigration.

It also was the basis, as Zipperstein discusses, for significant solidarity efforts combating white supremacist violence in America. Jews and African-Americans saw a stark similarity between the events in Kishinev and massacres like that in Tulsa in 1921, in which a mob of several thousand white people, including the authorities, violently attacked the Black community of the Greenwood District and killed an estimated 300 people.

That leads me to ask: Would it have been possible for my great-grandmother to have seen that Black man on her steamship and felt relief and fellow feeling rather than fear? Where were the lines of kinship between fellow victims of horrendous violence, and where are their limits?

Of course, I am not the first person to think about all this. A significant body of work has been and is being done on the complexities of Yiddish writers’ representations of American racism. I recently helped collect, curate and shepherd new work on the topic for a special issue of In geveb: A Journal of Yiddish Studies on 20th-century Yiddish representations of racist violence in America. Co-sponsored with YIVO: The Institute for Jewish Research, the issue, which is scheduled to be released in the coming weeks, will focus on how Yiddish writers thought about and represented American racism in their journalistic and literary work.

In conjunction with this project, In geveb and YIVO also held a panel at the John Hope Franklin Center for Reconciliation’s 12th Annual Reconciliation in America National Symposium, “The Future of Tulsa’s Past: The Centennial of the Tulsa Race Massacre and Beyond.”  The panel featured Zipperstein, Uri Schreter, Alyssa Quint and Hannah Pollin-Galay, and offered local and transnational perspectives on American racism from Yiddish vantage points.

Yiddish writers in the early 20th century were deeply concerned about American racist violence and represented it frequently in both journalistic and artistic ways. And their racial experience — somewhere between white and black — as well as their geographic, linguistic and political positionings, inflected their understandings of American racist violence. They wrote about racist violence as white people, as workers, as victims of racist trauma, as men or women, as people with international audiences whose frame of reference was largely European, as people writing across a language barrier.

Some Yiddish writers described racist violence in America from a position of solidarity. In his 1935 history of Black Americans published by the International Workers Order, the socialist organizer David Segal described the events in Tulsa. He praises the remarkable pride and bravery that Black veterans and workers displayed in fighting the white pogromshtshikes who destroyed their property and their lives. He describes the heroes of Tulsa who “demonstrated that when the cup of anger overflows, the blazing fire of the woes of the Black masses erupts.” Referring to the white mobs as “khuliganes,” Segal draws direct parallels between anti-Black violence in America and anti-Jewish violence in Eastern Europe, and his praise of Black resistance is a natural outcome of his solidarity with Black victims of racist violence.

Some Yiddish writers were more ambivalent. In a piece on Yiddish media coverage of the Tulsa massacre, Schreter demonstrates how, even when Yiddish writers were sympathetic to Black victims of racist violence, they often repeated spurious accusations that the victims themselves were to blame for the race “riots” and reiterated stereotypes about Black criminality.

I was thinking about my great-grandmother when I read an article from a June 20, 1919, issue of Gerekhtikayt, the Yiddish edition of  Justice, the newsletter of the International Ladies Garment Workers Union. The author, Roza Bedrik, published a regular column, “Di Froyen Velt,” or The Women’s World. In this particular column she wrote about racist violence and described several lynchings in detail. And while she describes the American South as a backward region that has persisted in its traditional racism in defiance of world progress, she argues that her largely North-based, Yiddish-speaking readers in particular should see themselves as implicated in this violence because it is done in the name of protecting the honor of white women like themselves.

I wondered whether my great-grandmother, understanding herself as white in opposition to the Black man that so frightened her on the steamship, ever felt the responsibility of that whiteness as she lived in Cuba, and later in New Jersey, in areas characterized by de facto segregation. I wonder if she ever felt an impulse for solidarity with Black people rather than fear.

My grandpa’s story is an incomplete one — he told it to me when I was a child, about a moment his mother experienced before he was even born. Possibly I’m even misremembering the version of the story he told me. I wish I could go back and understand why my great-grandmother screamed, if indeed she did at all, and what the Black man felt or understood by her scream. Embarrassment? Anger? Fear that my great-grandmother’s fear could provoke violence against him? Or did he see my great-grandmother’s response as comically ignorant? It’s a moment with many perspectives, each lost in an unrecoverable past.

But reading the Yiddish literary and journalistic sources that do exist from this moment helps me to understand what my great-grandmother might have felt.  Perhaps more importantly, it helps me to understand the radical possibilities of that moment of encounter and to imagine a future in which solidarity, rather than fear, might someday be achieved.

Jessica Kirzane
is the assistant instructional professor of Yiddish at the University of Chicago and editor-in-chief of In geveb: A Journal of Yiddish Studies.
The views and opinions expressed in this article are those of the author and do not necessarily reflect the views of JTA or its parent company, 70 Faces Media.