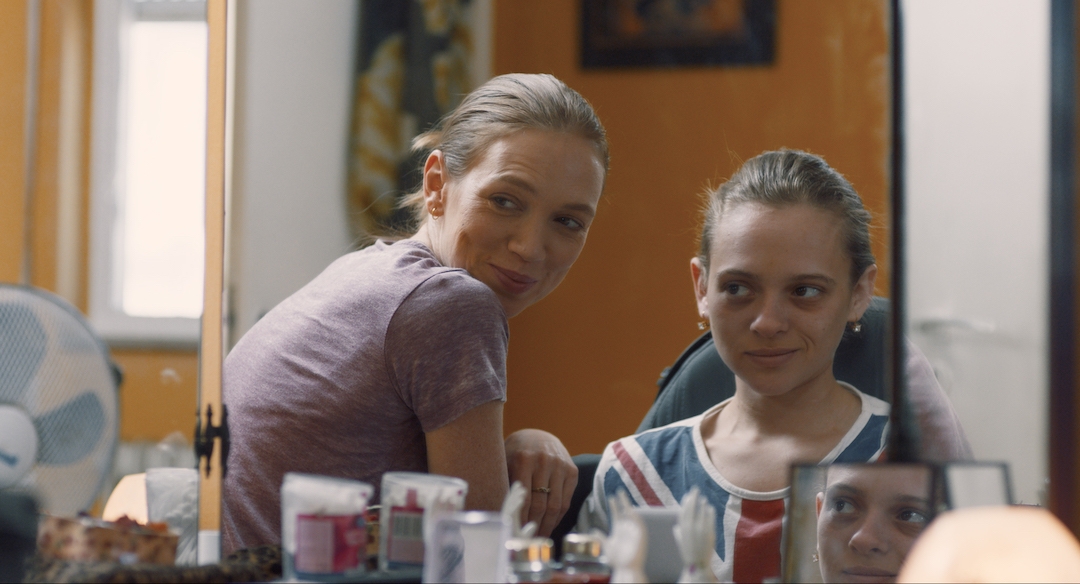 (JTA) — Shira Haas, the Israeli actress who vaulted into superstardom with her roles in the TV series “Shtisel” and “Unorthodox,” has a track record of playing multifaceted characters. Nonetheless, she faced unprecedented challenges when making the new film “Asia,” which dominated last year’s Ophir Awards (the Israeli equivalent to the Oscars) and is seeing a U.S. release this week.

In the starkly photographed, minimalist film, Haas plays Vika, a tough yet sensitive kid struggling from a degenerative neurological disease. She lives with her single mother, Asia (Alena Yiv), a free spirit, and the two women are forced to come to terms with Vika’s accelerating condition.

For Haas, who was diagnosed with kidney cancer at age 2 and saw her growth stunted as a result of her chemotherapy treatments, the role presented a unique challenge.

“First, I had to deal with Vika’s physical condition, which changes from scene to scene, and it had to be very specific — from the way Vika holds a cup to the way she walks,” Haas told the Jewish Telegraphic Agency over the phone from her home in Tel Aviv. “Though it is never spelled out in the movie, she has ALS [Lou Gehrig’s disease]. We consulted with a doctor throughout.”

Writer-director Ruthy Pribar based the story on the prolonged death of her own sister 14 years ago, having recalled her mother’s relentless, selfless devotion over that period. Pribar, who wrote the script during her own pregnancy, said she often wondered if she could measure up to her own mother when she became one.

She’s not convinced women are born to be mothers.

“Being a mother is a daily process,” Pribar, who put the production on hold until after she gave birth, said during a phone interview from Tel Aviv. “I have good days, but also bad days when I think who gave me the right to be a mother?”

It’s a question few other filmmaking teams are quite as equipped to deal with. “Asia” is unusual for featuring a strong female presence both behind and in front of the camera: In addition to the writer-director, the cinematographer and editor are women, too. Among the nine Ophirs awarded to the film, eight went to women, including for best picture, best actress (Yiv) and best supporting actress (Haas).

Throughout much of the film, set in a bleak, working-class Jerusalem neighborhood, the Russia-born Asia speaks to Vika in Russian, while Haas responds in Hebrew. Haas translated Asia’s Russian lines into Hebrew and memorized them in order to respond spontaneously in Hebrew when Asia talks to her.

Breaking down Vika’s complex emotional journey as a youngster learning to face her own inevitable demise, Haas said, required some deep soul-searching.

“I read Elizabeth Kübler-Ross on the five stages of grief — from negotiation to depression to anger to denial to finally acceptance,” she said. “It was hard. Even though the film is about death and grief, it’s also about love and connection between a mother and daughter.”

Early in the film Asia, who works as a nurse, is by turns an almost indifferent mom and/or a buddy. She and her daughter are close in age and even look alike; they could be sisters. At one point they share a cigarette. Vika envies her mother’s easy sexual encounters and is saddened at her own prospect of dying a virgin.

For Yiv, playing Asia as a nontraditional mother required an imaginative leap.

“Asia’s distance from Vika, especially in the beginning, was difficult for me to understand,” she said from her home in Haifa. “Still, it’s a very familiar modern story where teenagers become the parents to the parents who feel little responsibility for their children.”

Like any contradictory character, Asia raises many questions. Pribar and Yiv view her through a feminist lens, insisting that she has enjoyed her life and is no victim. Despite telling her daughter that “the only good thing I ever got from a man was you,” she’s not feeling sorry for herself: The statement instead is an expression of mother-daughter bonding.

And the film’s ending, without giving away any spoilers, works to reset that bond. In Haas’s words, “Vika has allowed herself to become the child.”

Even in its bleakest moments, the three artists insist “Asia” is a love story and an affirmation of life.

“Asia” premieres June 11 in New York, with Haas and Pribar in person at select screenings, and expands to more cities June 25.