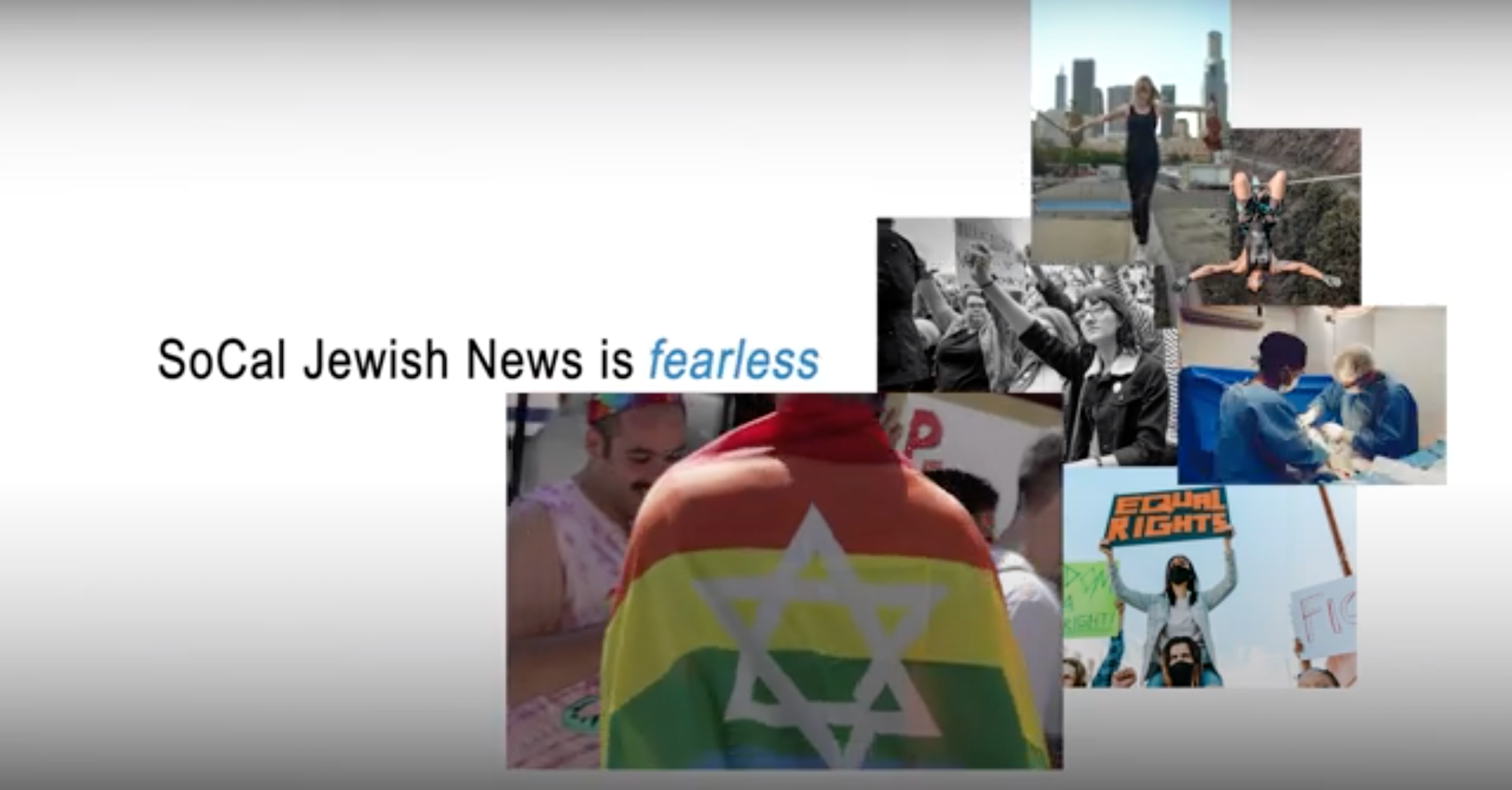 A still from the promotional video for SoCal Jewish News, a Los Angeles-based Jewish publication run by former staff of the Jewish Journal that is aiming to launch.
Advertisement

(JTA) — A team of journalists once employed by the flagship Jewish newspaper in Los Angeles is trying to create an alternative news source for America’s second-largest Jewish community.

SoCal Jewish News announced itself last month with a GoFundMe campaign and a July 19 target launch date. Without mentioning the 35-year-old Jewish Journal of Greater Los Angeles, the new website emphasizes that it will be different from the Jewish news currently on offer in the city.

SoCal Jewish News is “committed to covering the entire community,” the site says.

Its founding editor, Kelly Hartog, the Jewish Journal’s managing editor until she was laid off in October, described SoCal Jewish News on Twitter as “a megaphone for Jewish news, all filtered through a lens of ethics, objectivity and professionalism.” And a promo video announces, “You deserve a reputable news outlet” (emphasis theirs).

It’s unclear whether SoCal Jewish News will get off the ground. Hartog declined to speak about the venture, and others involved referred inquiries to her. Meanwhile, after setting a crowdfunding goal of $200,000, the upstart venture scaled back its target by 95% after raising just $3,000 in donations over several weeks.

“I think it would be very challenging for another group to start another Jewish publication at this moment in time,” Jay Sanderson, the president of the Jewish Federation of Greater Los Angeles, told the Jewish Telegraphic Agency. “Competition is great, but Jewish journalism is a challenge to begin with.”

Across the country, the number of journalism jobs at U.S. newspapers fell by nearly half over the last decade, according to the Pew Research Center. The Jewish Journal’s staff has shrunk by two-thirds in the past several years since David Suissa took over as editor in chief, publisher and president in 2017 after running its business operations. In October, the paper also suspended its print edition, citing the COVID-19 pandemic.

The Jewish Journal is the institutional paper of the large and diverse Jewish community in Los Angeles, and a syndication client of JTA. Journal supporters say the staff decline and print suspension is the natural effect of a crumbling business model for local news, and Sanderson said he believes Suissa has led the paper admirably through stormy seas that included the abrupt disappearance of advertising revenue during the pandemic. Tabby Refael, a Journal freelance columnist, called Suissa “an intuitive and cherished mentor.”

But a half-dozen former staffers said the staff reduction was driven by more than finances. They said that Suissa’s management style alienated the staff, and that he made erratic hiring and firing decisions based on personal whims. Some staffers said they resigned over their differences with him.

Some of those critics are involved in the new venture, including Hartog, who told JTA in April that the Journal had been “the most extremely unpleasant and difficult newsroom I have ever worked in.”

Other Jewish Journal critics said their concern is less about the paper’s internal operations than about the product itself. They said the changes under Suissa’s leadership have left Los Angeles Jews, particularly the politically liberal, needing something different.

Under Suissa, the paper has shifted its focus from original local reporting in favor of commentary, a shift that his critics say is disproportionately right wing. Suissa himself authors and hosts many of the Journal columns, podcasts and videos, and uses the space to decry progressive ideology, including in a video posted to Facebook Live last fall when he called Black Lives Matter “an anti-American movement.”

A new section of the website titled “The Speech Project” aggregates an assortment of stories criticizing critical race theory and “wokeness,” including pieces from right-wing outlets such as the Epoch Times and the New York Post, and has a subsection devoted to “Cancel Culture.”

“I think the Jewish community is tremendously unserved by this kind of monotone or monochromatic perspective of the Journal in its current form,” said David Myers, a professor of Jewish history at UCLA and president of the New Israel Fund who was a Jewish Journal columnist before Suissa took over.

Myers said he and other local community activists had been in conversation with the team behind SoCal Jewish News about starting an alternative publication, but that he was not involved in the new venture.

Los Angeles Jews tend to vote overwhelmingly Democratic and progressive, and the city is home to many large progressive synagogues. But the city also has substantive populations, including Orthodox and Mizrahi Jews, with more conservative political beliefs. (Suissa himself was born in Morocco.)

Bouskila recently joined the Journal board, along with Rabbi Lori Shapiro, who heads the transdenominational Open Temple in Venice Beach and describes herself as a political progressive.

Shapiro said she believes the paper is committed to showcasing the diversity of opinions held by Los Angeles Jews and she was not troubled by the paper’s editorial page. Suissa is “a critically thinking moderate with a love of Israel, which pushes him to the right camp,” said Shapiro, who also donated $18 to the SoCal Jewish News’ GoFundMe.

“If anything, he leans right out of a necessity to defend Israel’s right to exist,” she said.

Bouskila and Shapiro joined the board after several members resigned this winter, a move that former longtime board member Irwin Field attributed to a need for more digital expertise there. In a recent column, Suissa said the changes made him optimistic about the paper’s future and promised a relaunched print edition this fall.

The paper also has found reliable support from one of its most generous donors, billionaire investor and Westfield real estate heir Peter Lowy, who remains the board chair. And Suissa credits Mitch Julis, a hedge fund manager who has donated to both Republican and Democratic politicians, with helping the Journal broaden its donor base during the pandemic.

Suissa declined an interview with JTA. But he wrote in an email statement that he welcomes the arrival of SoCal Jewish News.

“I always encourage people to follow their dreams, which is what I’ve always done,” Suissa said. “I wish this new venture the best. As far as I’m concerned, the more Jewish journalism, the better.”

If Los Angeles does gain a second Jewish news organization, it would not be the only American city in that position. In Minnesota, TC Jewfolk has seen success among younger Jews even as the Twin Cities’ 109-year-old print newspaper, the American Jewish World, continues to publish. In Detroit, a new site for commentary, Nu?Detroit, launched earlier this year, though the Detroit Jewish News still stands.

But whether the city can sustain two publications is a question. The nonprofit group Jumpstart Labs is incubating and processing donations for SoCal Jewish News while the new venture seeks nonprofit status.

Suissa’s predecessor at the Journal, Rob Eshman, who worked at the paper for 24 years and now is the national editor at the Forward, said Suissa was “the natural choice” to take over for him four years ago. He said the political bent of the paper is the prerogative of its editor — and that if community members want something else, they’ll make that known.

“Whatever your conception of your Jewish community is, you are entitled to,” said Eshman, whose regular column as editor expressed a more liberal bent. “It’s your paper, you can do it. Whether it’s good business sense, whether it resonates with the community you’re trying to serve, that’s an issue.”