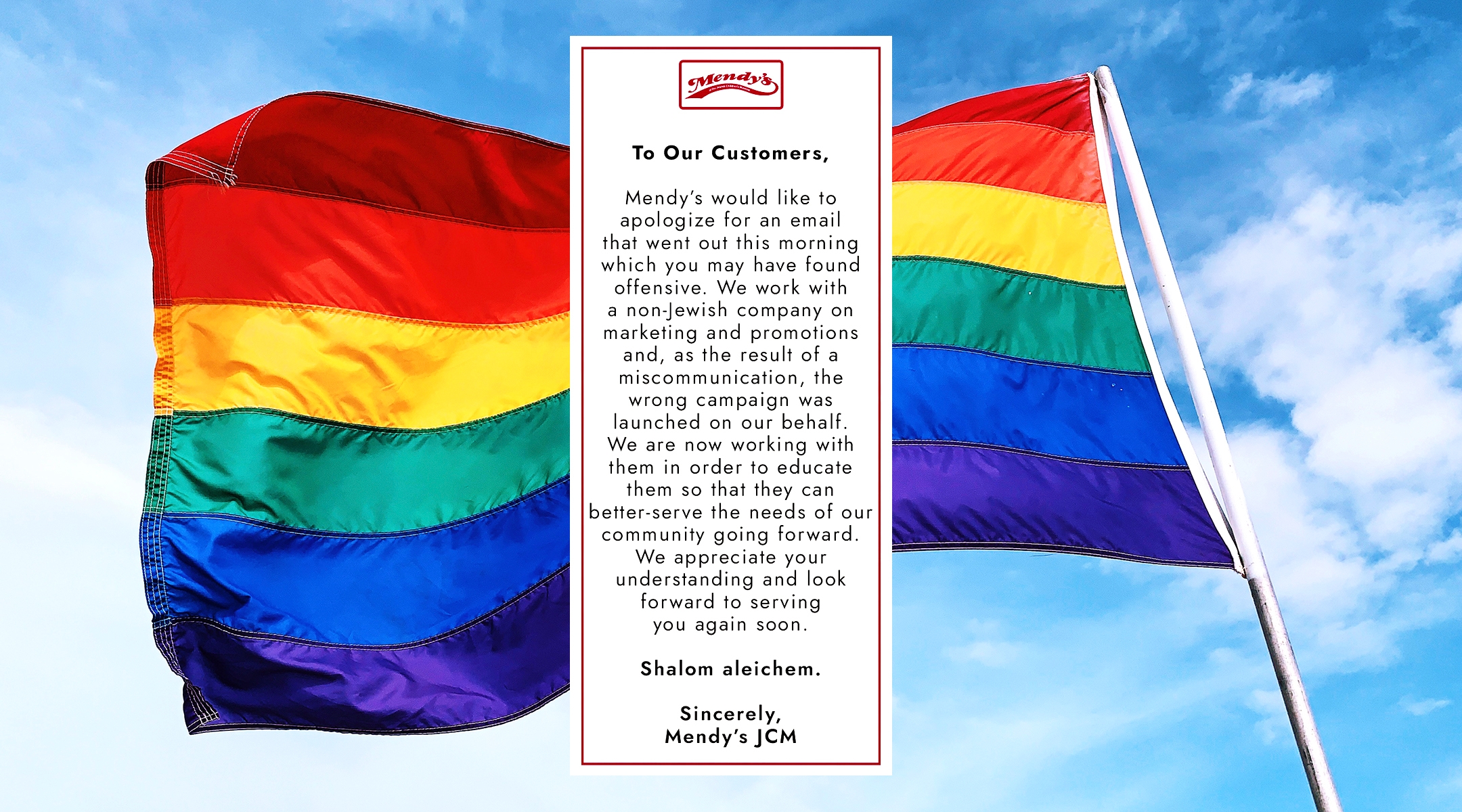 (JTA) — When Rabbi Mike Moskowitz got the Pride email from Kasbah BBQ & Deli, a kosher restaurant on the Upper West Side of Manhattan, he immediately went to Facebook to offer his feedback.

“Very impressed!” wrote Moskowitz, a longtime advocate for LGBTQ inclusion in Orthodox communities. He tagged the restaurant and shared the rainbow-colored image that touted “diversity in all many flavors,” along with a 10% discount code.

The email was news to Kasbah Deli, too.

“This is our old logo, something here is wrong and we are looking into it,” Kasbah commented.

It wasn’t the only New York City kosher restaurant to be surprised by its own Pride email. Mendy’s, a kosher deli in Brooklyn’s Crown Heights, sent a formal retraction and apology to customers just hours after its email went out, blaming the incident on a marketing company.

“Mendy’s would like to apologize for an email that went out this morning that you may have found offensive,” its retraction email said. “We work with a non-Jewish company on marketing and promotions and, as the result of a miscommunication, the wrong campaign was launched on our behalf. We are now working with them in order to educate them so that they can better-serve the needs of our community going forward.”

Both Mendy’s and Deli Kasbah send promotions through a service offered by 9Fold, a company that operates digital services for restaurants.

Reached by phone, a Mendy’s employee said the discount code (15% off with code TOGETHER) had been sent out “without talking to the owner.” The employee declined to give his name or comment further.

Deli Kasbah’s email offered a 10% discount code. A representative of the restaurant said the manager was out of town and could not comment about the email.

But the restaurant’s Facebook account responded quickly to the post from Moskowitz, who is currently a scholar in residence at Congregation Beit Simchat Torah, an LGBTQ synagogue in Manhattan.

“We don’t know where was this sent from we are looking in to it our self’s as well,” it wrote.

“Thank you and to be clear, we are very supportive of it and hope that you do not apologize for celebrating people,” Moskowitz answered. “If I can be supportive in any way, please PM me.”