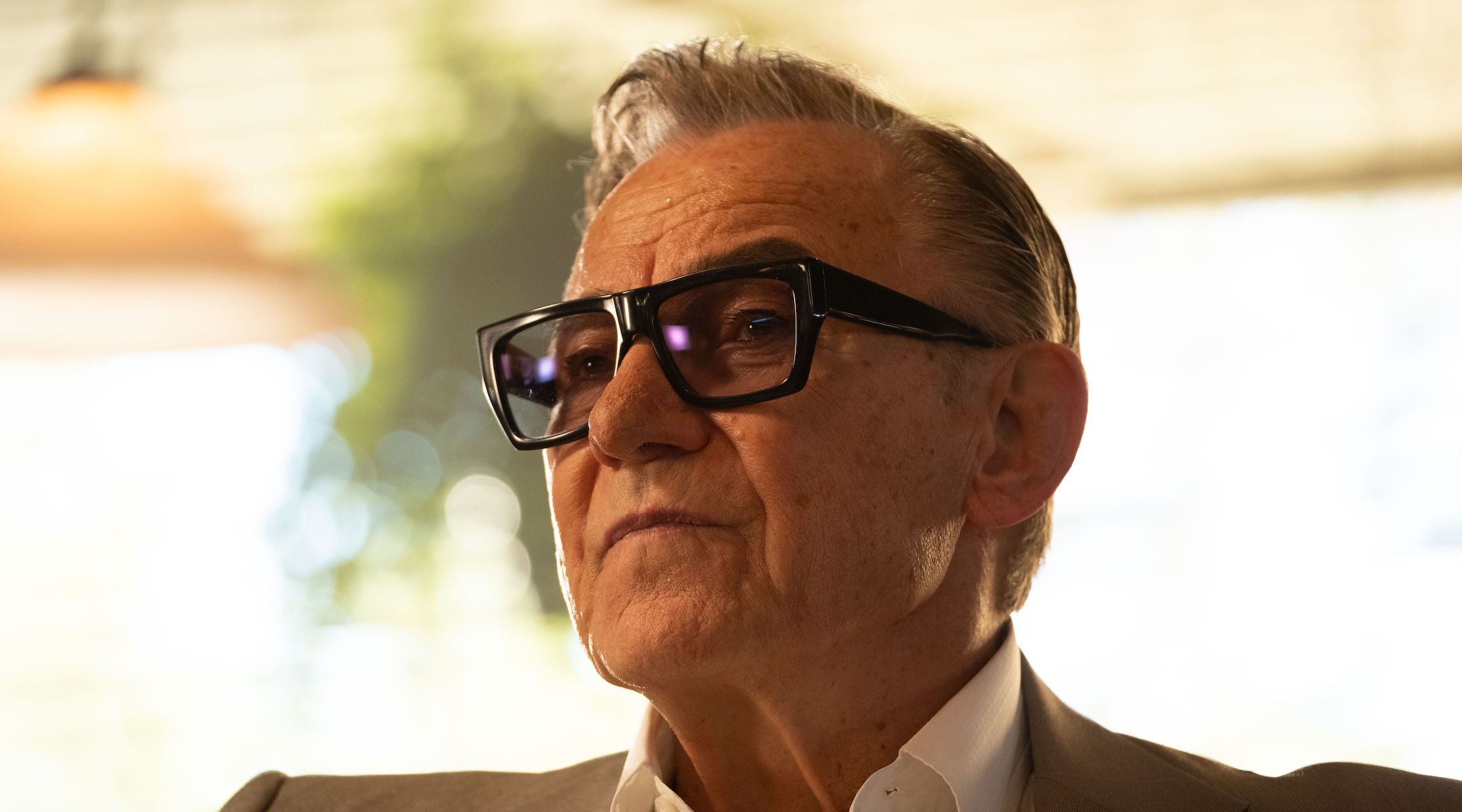 (JTA) — Perhaps no American Jewish actor has been so closely associated with crime films as Harvey Keitel.

During a career now in its sixth decade, the 82-year-old Keitel has appeared in “Mean Streets,” “Taxi Driver,” “Wise Guys,” “Bugsy,” “The Two Jakes,” “Reservoir Dogs” and “The Irishman,” among numerous other films.

Now he’s adding to the list with “Lansky,” portraying perhaps the most famous Jewish gangster of all time, Meyer Lansky.

Lansky, born in Russia in 1902, arrived in New York in 1911. Known as the “Mob’s Accountant,” he was notorious in his own right, operating criminal rackets from Miami to Las Vegas to Cuba and playing a role in the establishment of what’s been called the National Crime Syndicate.

The film, which opens Friday in theaters and is directed by Eytan Rockaway, has Keitel portraying Lansky in the later part of his life, telling his life story to a book author (“Avatar” star Sam Worthington). John Magaro plays Lansky in his younger years, and the cast also includes Minka Kelly, AnnaSophia Robb and David James Elliott.

While some films about Jews and organized crime, such as Martin Scorsese’s “Casino,” have avoided much exploration of their characters’ Jewish identity — aside from the odd antisemitic slur — “Lansky” is upfront about the importance of Jewishness to Lansky’s story.

We see Lansky, in the run-up to World War II, brawling with Nazi sympathizers from the German-American Bund. We also see him saying Kaddish in a synagogue and telling a rabbi joke. A montage of brutality by the Jewish criminal outfit Murder, Inc., is scored with “Hava Nagila.”

Later he’s seen promising aid and help to the nascent State of Israel — only to feel betrayed in the early 1970s when Golda Meir’s government denied him asylum.

“It was an important element in his life,” Rockaway said of the inclusion of such details. “And I thought to emphasize that — not tremendously, but I felt it was important.”

The “Lansky” film is somewhat personal for the director. He’s the son of Robert Rockaway, a history professor and scholar on the subject of Jews and organized crime. The author of a 1993 book titled “But He Was Good to His Mother: The Lives and Crimes of Jewish Gangsters,” the elder Rockaway conducted a series of interviews with Lansky when the gangster was in his late 70s. The scenes in the movie with a fictitious journalist named David Stone are based loosely on Robert Rockaway’s own experiences speaking with Lansky.

The script, Rockaway said in an interview, drew on his father’s research, although the younger Rockaway also did some of his own, noting that he was especially influenced by Robert Lacey’s 1991 biography “Little Man: Meyer Lansky and the Gangster Life.” The two Rockaways share a “story by” credit for the film.

Rockaway, the son of an American father and an Israeli mother, was born in Israel and came to the U.S. for college after finishing his army service, living in New York. A graduate of New York University’s Tisch School of the Arts, Rockaway has made commercials and music videos, and “Lansky” is his second film as director following the 2016 horror movie “The Abandoned.”

“I tried to be as objective as I could, to a certain extent,” Rockaway said of the thorny issue often raised in movies about crime bosses. “I definitely didn’t want to glorify him, but he did bad and he did good.” 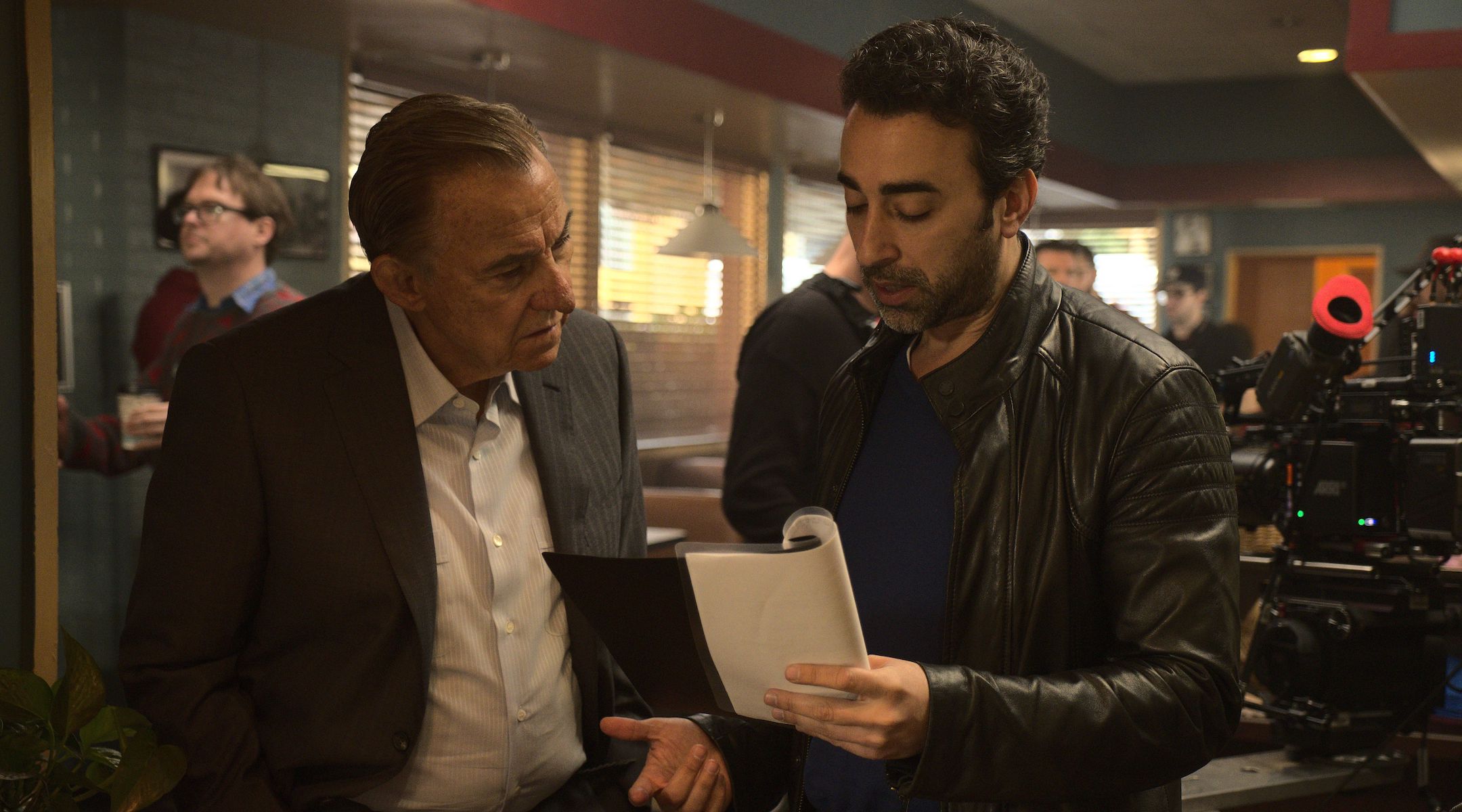 An active criminal for more than a half century, Lansky was a rarity among gangsters in some key ways: Aside from serving a couple of months on a gambling charge, he avoided major prison time, and also managed to live to old age, passing away at 80 in 1983. That gambling conviction was costly, however, as it later led Israel to deny him asylum.

Lansky’s “good” side, at least according to the film, consisted of fighting Nazis, and also providing crucial support to Israel at the outset of its existence.

Rockaway says in the press kit: “Meyer was a husband, father, friend, killer, genius, criminal, patriot and the founder of the largest crime organization in American history. To fully understand and depict this complicated man, this film portrays various aspects of his life while moving back and forth from his past to his present as an old man, revisiting key moments of his life.”

“This film is not about loving or hating this man,” he adds, “it is about understanding him.”

Keitel is among several screen portrayals of Lansky by Jewish actors, including Richard Dreyfuss in a David Mamet-written HBO movie, also called “Lansky,” in 1999, and Dustin Hoffman in 2005’s “The Lost City.” Patrick Fischler played the gangster in the TV series “Mob City.”

But probably the most famous movie portrayal of Lansky was a fictionalized version: Hyman Roth (played by Lee Strasberg), the partner-turned-antagonist of the Corleone family in 1974’s “The Godfather Part II,” was heavily based on Lansky.

Roth, like Lansky, was an older Jewish gangster who worked with the mafia to build casinos in Cuba, and like Lansky he later sought asylum in Israel.

In the new film, Lansky likens his business operations with the mob to that of U.S. Steel, which “Godfather” fans may recognize as a line said by Roth. But according to Rockaway, it was a comparison that the real-life Lansky was known to make himself, the National Crime Syndicate to that corporation.

Ironically, the Jewish Strasberg, who was better known as an acting teacher than as an actor, was a teacher and mentor to Keitel — and Keitel to this day is closely associated with New York’s Lee Strasberg Theatre and Film Institute. Rockaway said he went out of his way not to watch other movies about Lansky, but he listed the films of Martin Scorsese, as well the Coen Brothers’ “Miller’s Crossing,” as great influences.

As for Robert Rockaway, who lives in Israel and teaches at Tel Aviv University, he has yet to see the movie. The director says his father is waiting for the theatrical release of the film that sprung from his long-ago research and was brought to the screen by his son.

“Lansky” opens June 25 in U.S. theaters as well as on VOD, and it will be available to stream three months later on Amazon Prime Video.