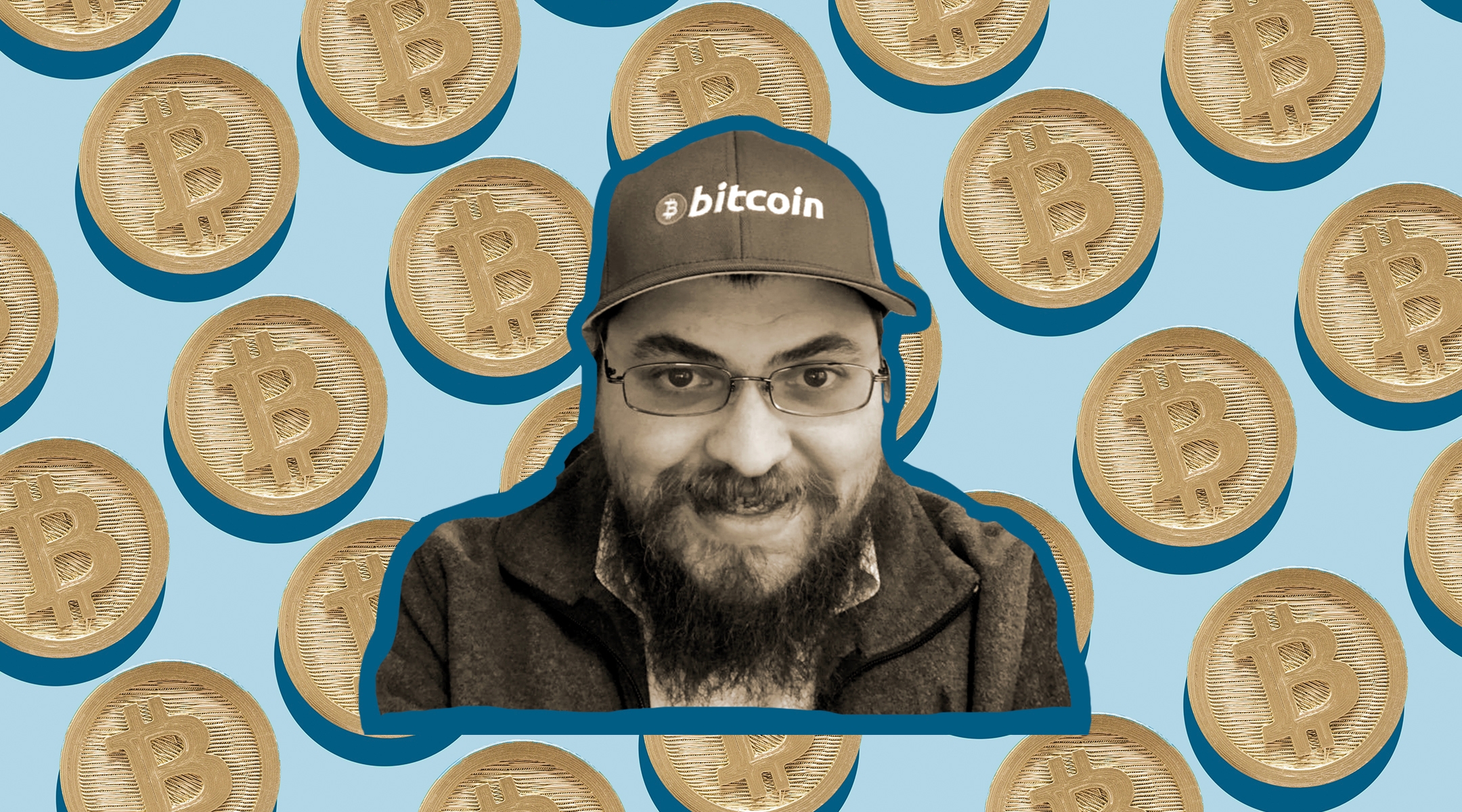 Strangers ask Michael Caras for advice and spiritual guidance on both Judaism and cryptocurrency. (Courtesy of Caras)
Advertisement

(JTA) — Many of Twitter’s cryptocurrency zealots are often notorious trolls, but one particular thought leader stands out from the rest. He happens to be a rabbi.

“Twitter people either use it to scream at each other and not be nice, which I don’t like,” says micro-influencer Rabbi Michael Caras, also known as @thebitcoinrabbi. ”I enjoy connecting with my two communities through Twitter, both Jewish Twitter and Bitcoin Twitter.”

Caras, a rabbi associated with the Hasidic Chabad-Lubavitch movement, is fascinated by the way that Bitcoin, both the network and the asset, relates to halacha (Jewish law). And since he’s quite vocal about it online, Caras says that strangers slide into his Twitter messages each week to ask for advice and spiritual guidance on the topic.

Before serving as a public bridge between the two worlds, he studied at Yeshiva Ohr Tmimim in Israel and now teaches both Judaism and technology classes at Maimonides Hebrew Day School in New York. Caras has been interested in Bitcoin since 2017, and in 2019 he published a children’s book about it that has sold more than 10,000 copies.

The book, a secular introduction to basic economics for kids, tells a tale of children learning about how to use Bitcoin as money by running a lemonade stand in a town called Bitville.

Caras has also spoken at synagogues and Jewish youth groups about Bitcoin and Judaism, including how the history of money is discussed in the Torah.

“There are people who are Jewish but not observant who have never talked to a rabbi any other time,” he says. “Because they feel some type of kinship with me through Bitcoin Twitter, they’ll feel comfortable that I will give them relevant information without lecturing them.

“I also have a WhatsApp chat where people often ask me privately for guidance as well. Sometimes they have a Bitcoin question, in some way, and I’m happy to help. I’m happy to be that resource for the community, especially for things like private key management.”

Although there are thousands of things now called cryptocurrency, Bitcoin is the world’s oldest and most decentralized blockchain network, with the most diverse population of users as of 2021. People can store, send and receive currencies like Bitcoin without a third party, like a bank.

Most avid cryptocurrency users keep track of transactions with a public network and a ledger called a blockchain. For example, the Bitcoin ledger is a record of all transitions with bitcoin (the asset). However, many cryptocurrency traders prefer to use mainstream financial marketplaces (such as Fidelity or the Israeli company eToro), which don’t necessarily need to use the public blockchain for all transactions.

Caras is among the avid users who prefer to participate in the grassroots Bitcoin network, transacting with open source tools rather than merely trading cryptocurrency like stocks.

Caras, like many rabbis, is a huge fan of old records, ledgers and sacred secrets. With regards to the “private key management” he mentioned, bitcoin users keep track of their bitcoin using a unique password called a private key — protect that key, and the bitcoin will remain in your custody. That’s why knowledge related to private key management is so important to Caras.

The public blockchain ledger is not unlike the way Jewish communities maintained written records about their societies for thousands of years. This combination of history and technology fascinates Caras.

“We have a ‘the chain of tradition’ quite literally in Hebrew, this point of following the tradition back in written history,” he says. “We are continuing a chain, and it is a continuous chain. There are soft forks and hard forks within Judaism, different customs, like protocols, that are compatible with each other.”

Caras, 31, was raised in a “fairly secular” household, he says, and considered a degree in computer science before switching to rabbinical school. His brother, also a well-known Bitcoin advocate, became more religious after visiting a Chabad house as a teenager and Caras followed suit.

Now a father of six and observant member of the Chabad movement, Caras finds many similarities between the cypherpunk ethos and Judaism. He’s not alone, as there are numerous WhatsApp groups for Jewish crypto fans, including the “Jewish Crypto Chat” where Caras is among nearly 190 participants.

“Judaism has a lot of legal frameworks for how money is used. A Jewish wedding is a transaction. The groom puts a ring on her finger because he needs to give her something of value under the huppah. [In private DMs] I address questions like, could that wedding transaction be done with bitcoin?” he says. 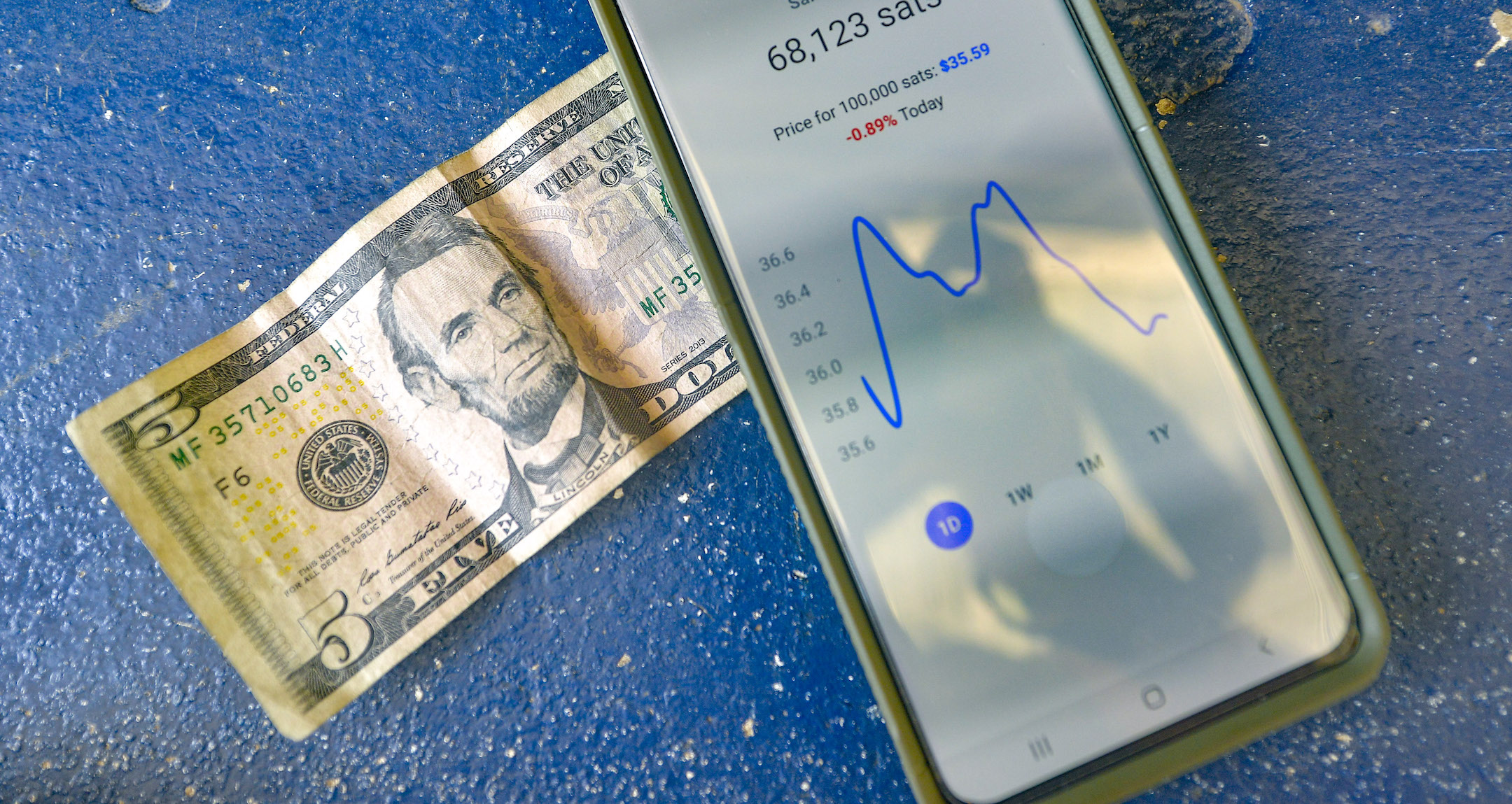 Caras is sometimes asked: Can I mine Bitcoin during a day of rest? (Camilo Freedman/SOPA Images/LightRocket via Getty Images)

As a family, Caras and his wife see Bitcoin stewardship as part of their household virtues.

“Hopefully, the majority of the time, we use this technology for good,” he says. “That’s what I like to encourage people to think about.”

There’s always a way to apply guidance from the Torah to new conundrums in the modern world. Some people have asked Caras about running trading bots or bitcoin mining on Shabbat, or if checking the always fluctuating bitcoin price (it’s value compared to the dollar) disrupts from a day of rest.

Bitcoin is often used for donating to charity and securing savings. On the other hand, there are, of course, controversial and harmful ways to use bitcoin. For example, Hamas — the militant group that rules the Gaza Strip and is deemed a terrorist organization by the U.S. and Israel — has reportedly fundraised using the cryptocurrency.

Caras, who lived in Israel for four years of rabbinical school and has a brother who lives there, says he’s been thinking a lot about the Holy Land since the most recent conflict. It’s impossible to say exactly how many bitcoin users there are in Israel, although some local exchanges have garnered more than 55,000 users (each) and thousands of people work in the local crypto industry, including some companies that expanded globally to serve millions. (On a much smaller scale, some Palestinian bitcoin dealers also get their wares from Tel Aviv’s same crypto hubs.)

Caras strongly believes in Israel’s right to defend itself, and hopes that Bitcoin could present economic opportunities that could lessen the stranglehold he says that Hamas has on the population of Gaza. Before the pandemic, in 2019, several Gazan Bitcoin dealers were reportedly transacting with more than $5 million worth of cryptocurrency each every month for civilian use cases like international shopping, paying tuition abroad or accepting freelance payments without PayPal or credit cards.

“I’m not concerned about Hamas using relatively small amounts of bitcoin to fund their terrorism, as it seems rather insignificant compared to their other funding methods,” Caras says. “Terrorists use cellphones and electricity and every other type of technology that most people use for good peaceful purposes.

“I am glad that individual Palestinians can use a money which can’t be easily controlled or taken from them by the Palestinian Authority or Hamas.”

This sentiment is common among Caras’ Twitter compatriots. Israeli investor Eylon Aviv of the crypto-savvy fund Collider Ventures, who knows Caras and enjoys his Twitter feed, says “the promise here is for Palestinians to not be dependent on the financial services provided by these terrorist organizations.”

“Basically every holiday is ‘insert an overpowering someone who tried to kill us,’ they fail, and we celebrate. The celebration is about the freedom and liberation that happens around the unsuccessful elimination attempt,” Aviv says, adding that censorship, resistance, loss and liberation are all recurring themes throughout Jewish history.

As a tool for self-sovereign transactions, people fleeing a dictatorship or freely transact despite persecution often use bitcoin.

And some Jewish users like Aviv wonder if Bitcoin would be useful if a Holocaust-like situation were to arise again, with governments and armies seizing assets from Jewish communities. Bitcoin would be easier to escape with.

Israeli crypto industry veteran Danny Brown Wolf thinks so, saying that “being Jewish, we pretty much all have in our family history some form of immigration story that involves being forced to leave assets behind.”

“Given this history, Jews of all peoples ought to appreciate financial sovereignty,” she says.

To be clear, Caras isn’t an advocate for any “blockchain revolution.” He only answers questions when asked and firmly considers himself a “maximalist,” meaning he only uses Bitcoin, no other cryptocurrency. He thinks users’ energy is best spent on Bitcoin rather than exploring new token experiments.

“I’m a hardcore maximalist. I don’t believe the blockchain has any use case outside of Bitcoin and securing the Bitcoin blockchain,” Caras says. “My brother in Israel tells me about every blockchain thing under the sun, but I’ve yet to see anything positive that it’s useful for beyond that.”

Instead, Caras prefers to contemplate what Jewish law says about loans and earning interest, for example, so he can learn for himself and help others learn how to apply Jewish ethics to the way he manages his Bitcoin.

“Every piece of technology in this world, it’s up to us to choose for ourselves,” Caras says, “whether we use technology for good or bad.”