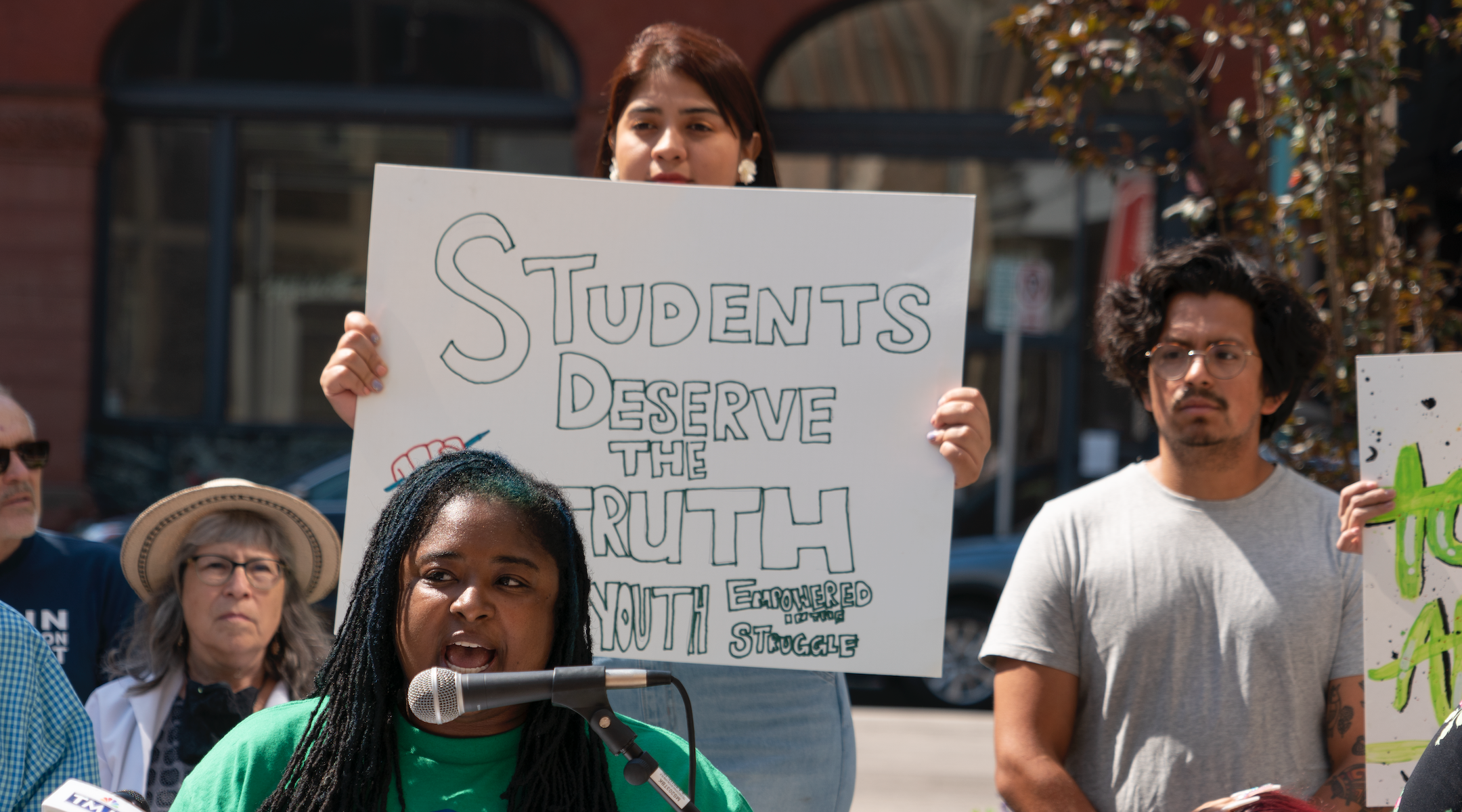 (JTA) — Anyone teaching the past by skipping over the unpleasant parts isn’t teaching history. They are engaged in propaganda.

Jewish tradition understands this: Refusing to sugarcoat their own people’s culpability, the Sages themselves teach that the destruction of the Temple by the Romans is a consequence of baseless hatred — among Jews.

Yet in nearly two dozen states, the movement to impose restrictions on the teaching of history is gaining momentum. Incited by a national hysteria over “critical race theory,” advocates of these educational fatwas are borrowing a page from authoritarian governments like Vladimir Putin’s Russia in a clumsy effort to avoid discussing the messy, controversial and painful moments in America’s history.

And as a professional historian, I can tell you that these bans will be terrible for anyone teaching or studying Jewish history.

What exactly is critical race theory, and how is it apparently  — in the words of Florida Gov. Ron DeSantis, a Republican who is seen as a potential presidential candidate — teaching our kids “to hate each other” and “hate our country”?

Critical race theory is a body of ideas associated not with the discipline of history but with the practice of law. Adherents believe that the legacy of slavery is baked into American society and culture to such a degree that African-Americans continue to suffer long-term, systemic economic harm. It suggests that discussing reparations should be on the national agenda (hence the origin of these ideas among legal scholars).

The impact of systemic racism may be measured, for example, in things as diverse as the wealth gap between white and Black Americans with similar educations and the declining tree cover in neighborhoods with majority African-American populations. Critical race theorists look to the history of government policies from the 1930s like redlining, under which the Federal Housing Authority refused to underwrite mortgages in African-American neighborhoods with the explicit goal of separating “incompatible racial groups.” Blacks were, like Jews, forbidden to buy homes in newly developed suburbs, while white Americans received help from the government to purchase homes in these leafy neighborhoods and to build generational wealth.

The CRT framework, decades old, gained popularity (or notoriety, depending on whom you ask) after the summer 2020 wave of protests that followed the murder of George Floyd.

The bans on teaching with a critical race theory framework aren’t really against history per se, which is in the past and therefore stubbornly resists regulation. Rather, these decrees fall more precisely within the category of what are called “memory laws.” Historian Timothy Snyder described these laws as “government actions designed to guide public interpretation of the past… by asserting a mandatory view of historical events, by forbidding the discussion of historical facts or interpretations or by providing vague guidelines that lead to self-censorship.”

Compared to Americans, Europeans have less of an allergy to limitations on free speech, and they generally accepted these laws when they were designed to protect victims of historical trauma, for example, by banning noxious phenomena such as Holocaust denial.

Putin, however, pioneered a new approach to memory laws: Rather than protecting the weak, they also can be weaponized to strengthen the powerful. In the context of Russian history, the counterpart to American slavery is the Holodomor, a terrible famine that killed millions of Ukrainians from 1932-1933. Beginning in 2008, Russia’s Duma assembly passed legislation that forbade the discussion of Russian government policies that contributed to the genocidal nature of the famine, and established entities like the “Presidential Commission of the Russian Federation to Counter Attempts to Falsify History to the Detriment of Russia’s Interests” (an ideological antecedent to the  now-defunct 1776 Commission, then President Trump’s last-minute attempt to promote a “pro-American curriculum”).

This is the intellectual home of the CRT bans. They share educational space with Poland’s ridiculous, offensive and dangerous 2018 law that criminalizes the suggestion that Poland bears any responsibility for the crimes committed by the Germans during World War II. The object of Poland’s memory law is not to prevent the resurgence of extremist antisemitism; it is to prevent Poles from confronting the complex legacy of collaboration with the Nazi occupation.

This brings us to the American versions of the memory laws. Tennessee, for example, recently passed SB 623, which lists 14 directives all tied to state funding. The requirements oscillate between the painfully obvious and the absurdly comic. On the one hand, Tennessee “does not prohibit… the impartial discussion of controversial aspects of history,” or even “the impartial instruction on the oppression of a particular group of people.” On the other hand, it bans teaching that “an individual, by virtue of the individual’s race or sex, is inherently privileged” (forestalling, presumably, lessons in how the redlining in the 1930s led to white wealth accumulation today, or how men enjoyed privileges over women — well, at just about any point in history). The prohibition sits within the same category as “promoting or advocating the violent overthrow of the United States government”!

Some scholars have objected in particular to the squishy concept outlined in 51.a.6: Educators are forbidden to teach in a manner that causes a student to “feel discomfort, guilt, anguish, or another form of psychological distress solely because of the individual’s race or sex.” Now it’s certainly good pedagogic practice to refrain from humiliating one’s students (I’m embarrassed to even have to say that). But it is a tall order to teach the history of race and sex in this country without making someone feel discomfort or anguish, just as it impossible to teach the Holocaust properly without causing German students to reflect on their national history, or the Holodomor without giving Russians pause to contemplate brutal Soviet agrarian policies.

Despite the 1776 Commissions promise to “unite, inspire, and ennoble all Americans,” these laws will chill honest engagement with hard truths, forcing teachers to lie to their students, even if only by omission.

Furthermore, anyone teaching Jewish history will be challenged to find a way to present the legacy of antisemitism without running afoul of these regulations. The historical linkage between Catholic theology and the persecution of Jews, for example, is rife with difficult topics. They range from the medieval charges of host desecration and the horrendous blood libel to the pope’s kidnapping of 6-year-old Edgardo Mortara in 1858 (we could, unfortunately, continue at length). Protestants would also be discomfited by Martin Luther’s anti-Jewish screed, “On the Jews and their Lies” (1543). The list of countries where Jews have lived in their diaspora is pretty much identical to the list of countries that have discriminated against Jews.

Obviously, the presentation of challenging material must be titrated to the specifics of the classroom, considering factors like the age and background preparation of the students. No responsible teacher wants to teach students to “hate each other” or “hate America.” But we all participate in a sacred covenant with our students: They expect us to tell them the truth. These memory laws, if enforced, would ask us to betray that covenant.