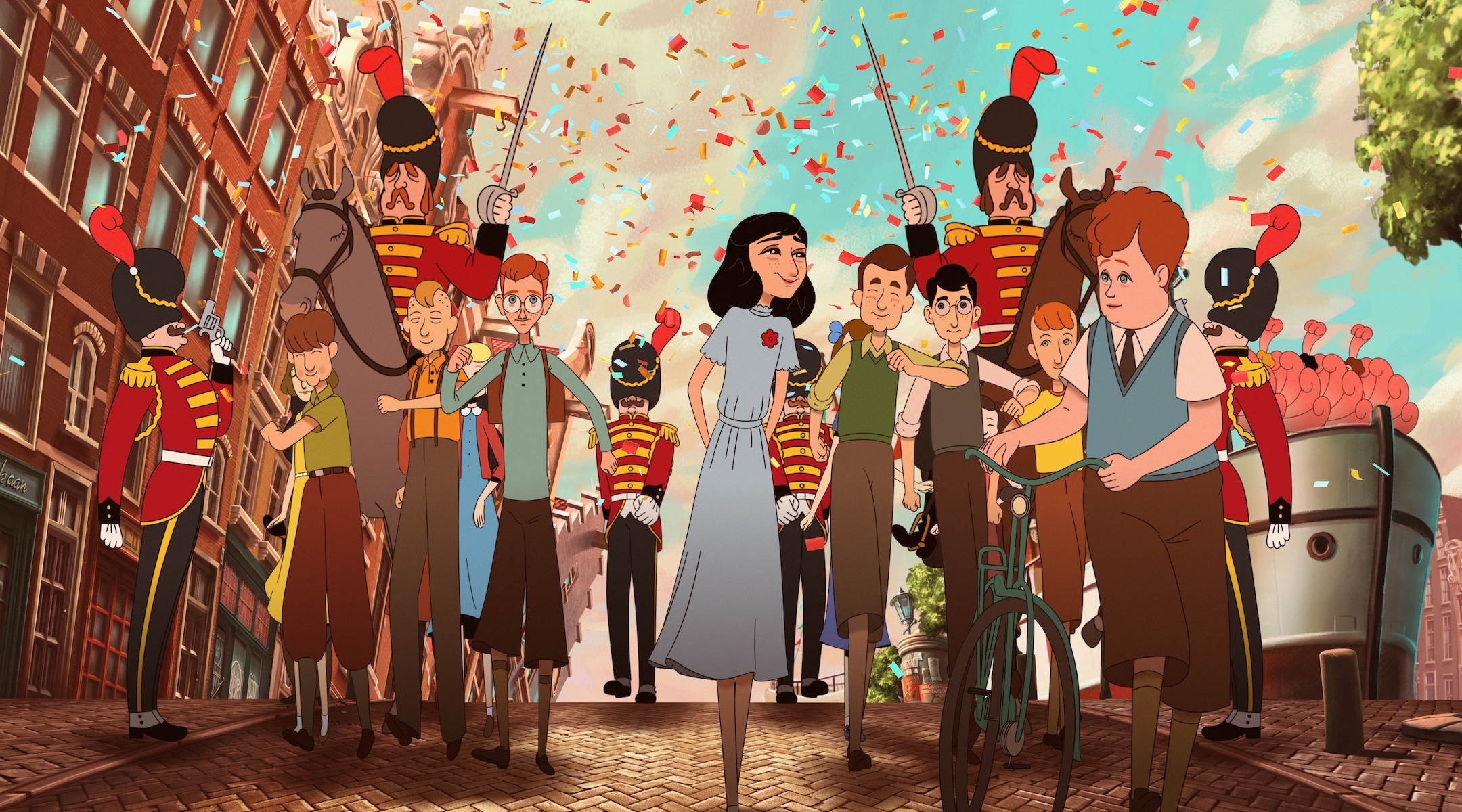 "Where Is Anne Frank" reimagines the famous diarist's life in animated form, with Israeli director Ari Folman partnering with the foundation that holds the copyright to her diary. (Courtesy of Purple Whale Films)
Advertisement

AMSTERDAM (JTA) — A disoriented teenage girl lies on Anne Frank’s bed as people swarm the family house. But these people are not Nazis; they’re modern-day tourists. And the girl on the bed isn’t Anne, but Kitty — the imaginary friend to whom she addressed her now world-famous diary.

Magically resurrected from the page and transported into modern-day Europe, Kitty is appalled by how society has fetishized her best friend Anne, hawking cheap merchandise and endless inaccurate reinterpretations of her words. Eventually she takes it upon herself to reclaim Anne’s legacy, by any means necessary.

This is the bold reimagining of Anne Frank’s story found in the new animated film “Where is Anne Frank,” which premiered last week at the Cannes Film Festival. The film was made by acclaimed Israeli director Ari Folman, best known for his 2008 Oscar-nominated animated documentary hybrid “Waltz With Bashir,” about the lasting memories of Israel’s first Lebanon War. Now Folman has tackled what many consider the sacred text of the Holocaust — rewriting Anne Frank in order to interpret her true lasting legacy.

Made in partnership with the Anne Frank Fonds, the Swiss nonprofit founded by Anne’s father, Otto, that holds the copyright to her diary, the film is aimed at younger audiences. But it also enters surprising political territory, as Kitty comes to understand Europe’s modern-day immigration crisis and begins to consciously relate the continent’s millions of asylum seekers to Anne’s story. 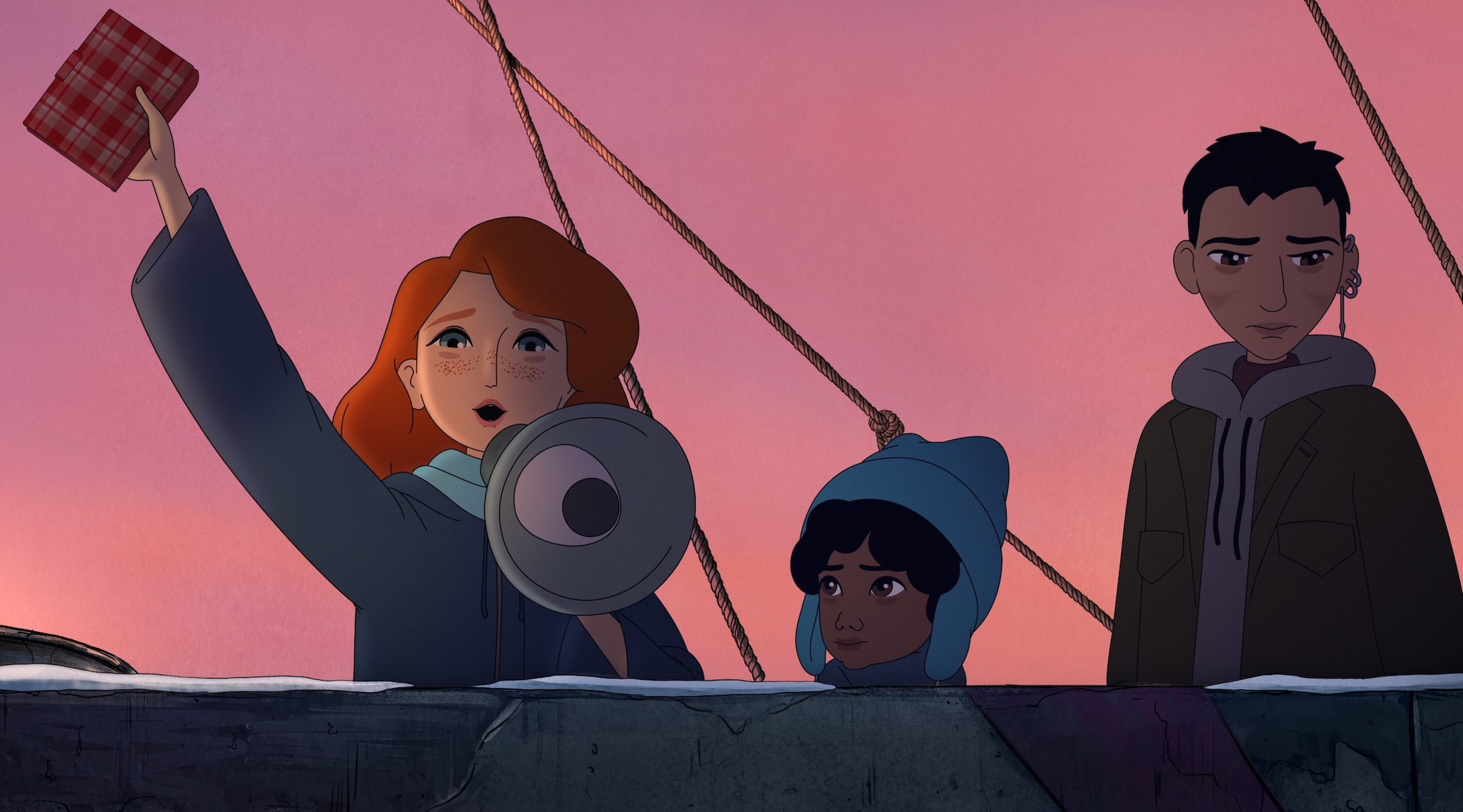 In the new animated film “Where Is Anne Frank,” which premiered at the 2021 Cannes Film Festival, Anne’s imaginary friend Kitty comes to life and has a chilling adventure in modern-day Amsterdam. (Courtesy of Purple Whale Films)

“The main goal of the film is to help young audiences today connect with Anne Frank’s story the way that previous generations connected with the diary,” Yves Kugelmann, a member of the Fonds board and a key producer of the film, told the Jewish Telegraphic Agency. “Frankly, that’s mostly how I look at the film. If this objective is achieved, then it’s a success.”

A fiery redhead with rosy cheekbones, Kitty is not just a silent observer — she speaks her mind, loudly, about the creeping commercialization of her best friend as a brand.

“Anne did not write this diary so that you can worship her,” she tells Dutch police in a climactic scen, following an incident in which she heckles a stage production of the diary. “Or name bridges and schools and theaters and train stations after her.”

Kitty also begins dating a boy who pickpockets tourists at the Anne Frank House and later becomes a pro-immigration activist.

As he did with “Bashir,” Folman blends spectacular fantasy sequences with a factually grounded narrative. Kitty’s journey through 2021 Amsterdam and a meticulously detailed Anne Frank House is paired with allusions to Greek mythology and the Roman Empire, both of which fascinated Anne. In flashbacks, the Nazis are portrayed as robot-like ghouls wearing death masks, patrolling the streets of Amsterdam with neither hate nor pity for the people they hunt and victimize — a reference to how Anne herself never met a Nazi prior to her capture and wrote about how she had trouble visualizing them.

Folman, who declined a pre-arranged interview with JTA, told the Hollywood Reporter that his own mother, a Holocaust survivor from Lodz, Poland, was eager for him to take the project.

“I actually didn’t want to do it at all,” Folman said. “I thought there were too many adaptations and she was too iconic. But I read the diary again, the first time since I was a teenager, and I also went to visit my mother — both my parents were Holocaust survivors. She said, ‘Look, we never interfered in your choices, but if you don’t take this project, I will die over the weekend, you can come and collect my body on Sunday. But if you do it, I will stay around until the premiere.’”

Another twist Folman learned while doing research for the project: His parents arrived in Auschwitz the same week as Anne’s parents, Otto and Edith.

Though Kitty continually decries the endless modern-day reinterpretations of Anne’s story that exist to burnish her status as a symbol rather than a person, it could be argued that the film in which she appears is another such effort, keen on drawing simplistic parallels between the Holocaust and the modern refugee crisis.

The film differs from the text in other ways, too: Although Anne’s diary contains a good deal of humor, the film has at least one character in distress in every scene, be it in modern-day Amsterdam or during the Holocaust. “Where Is Anne Frank” also alleges, without proof, that Auguste van Pels, who also hid with the Franks, concealed an expensive vase in the house, conceivably to avoid having to sell it for food.

But then Folman’s vision for the film was never about merely relaying the facts of the story.

“I was looking for a new dimension, a new way to tell the story,” he told the Hollywood Reporter. “And I tried to figure out how to bring it to the youngest audience I could. And when you start a movie with a miracle, like with this creation of Kitty, you build the fairy tale.”

In addition to the film, Folman also collaborated with the Anne Frank Fonds on a graphic novel adaptation of Anne’s diary, illustrated by David Polonsky and published in 2017. The film and the book will be part of a new educational package that the Fonds will share with hundreds of schools worldwide to which it provides Holocaust-education programs and materials.

In keeping with the charter of the nonprofit and Otto Frank’s wishes that none of the Fonds projects be commercial, any proceeds from the film will go to supporting the Fonds’ work, which includes many educational programs and projects with UNICEF, the United Nations agency for children’s welfare, Kugelmann said.

In Kitty, the project hopes it has found its newest ambassador to a younger generation — straight from the 80-year-old pages of Anne’s diary.