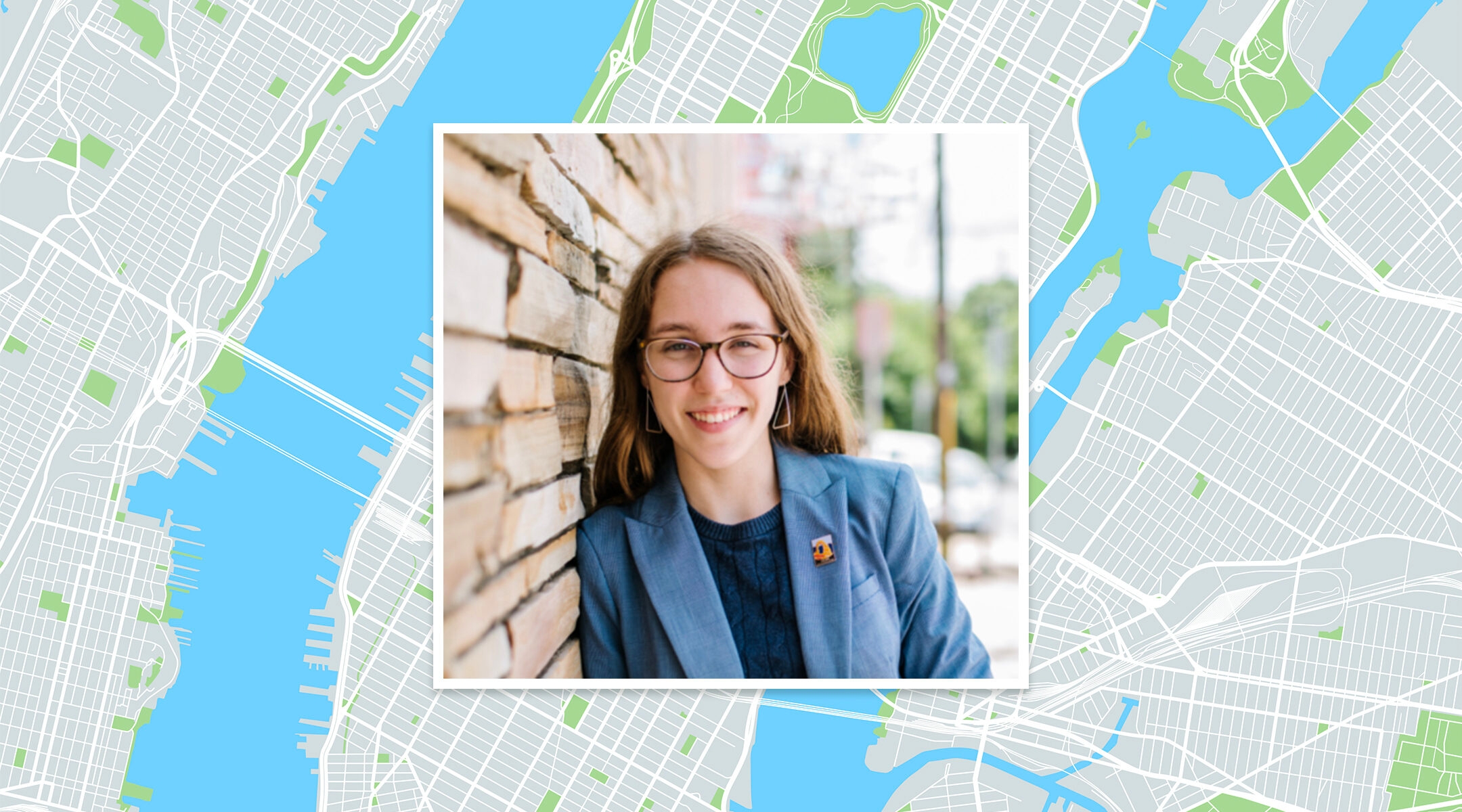 Amy Shreeve developed the Twitter account "This Used to Be a Synagogue" as a rhetoric and history major at the University of Texas-Austin. (Courtesy)
Advertisement

(New York Jewish Week via JTA) — Writer Luc Sante calls them the “ghosts of Manhattan.” Those are the souls of the poor and marginal people, now dead, whose presence can be felt like a shade in the history of now affluent neighborhoods, “where they push invisibly behind it to erect their memorials in the collective unconscious.”

Sante’s poltergeists came to mind after I stumbled on a strange little Twitter account called “This Used to Be a Synagogue” (@OldShulSpots). Once a day or so the account delivers a photograph of some nondescript street view in Manhattan, with a tweet stating the address and name of the congregation that used to sit on the site.

That nail salon at 90 Clinton St.? That used to be Linath Hazedeck Anshei Sadlikoff. The deli at E. 104th St.? Something called Mac’zikei Torath Kodesh.

I felt that if I stared at the photos long enough the color would fade and I’d see spectral images of Jewish ancestors entering these long-gone places after dodging horse-drawn carts, or steering boxy automobiles with high fenders and wide running boards.

Even the teeth-cracking names in the old Ashkenazi spellings hinted at something both ancient and familiar, like a cave drawing or the empty mezuzah cases you see in medieval ghettoes.

For a time the account didn’t explain much about who was behind it. I assumed it was a white-haired amateur historian of the Lower East Side or a Jewish conceptual artist who was making a point about gentrification.

So I sent a direct message and soon heard back from the creator, who identified herself as Amy Shreeve and agreed to chat on the phone. Shreeve explained that she started the account as an academic project in something called commemorative geography, which is the study of memory and location. She said that she was a history major and had accessed a public database from the Ackman & Ziff Family Genealogy Institute at the Center for Jewish History in Manhattan.

The database listed over 1,000 names and addresses of past and present Manhattan synagogues and Jewish organizations. Shreeve created a big spread sheet and then “geocoded” a Twitter bot using Google APIs and Python (I admit she lost me at this point), scheduling the bot to automatically post Google Streetview photographs of the places where synagogues and Jewish organizations used to be.

She said she was “originally curious about naming patterns and mapping out where people came from” and “really interested in thinking about the geography of Eastern Europe and see how people organized in New York based on where they originally came from.”

“At the University of Texas, in Austin.”

“No, I’m an undergraduate. My major is rhetoric and history.” 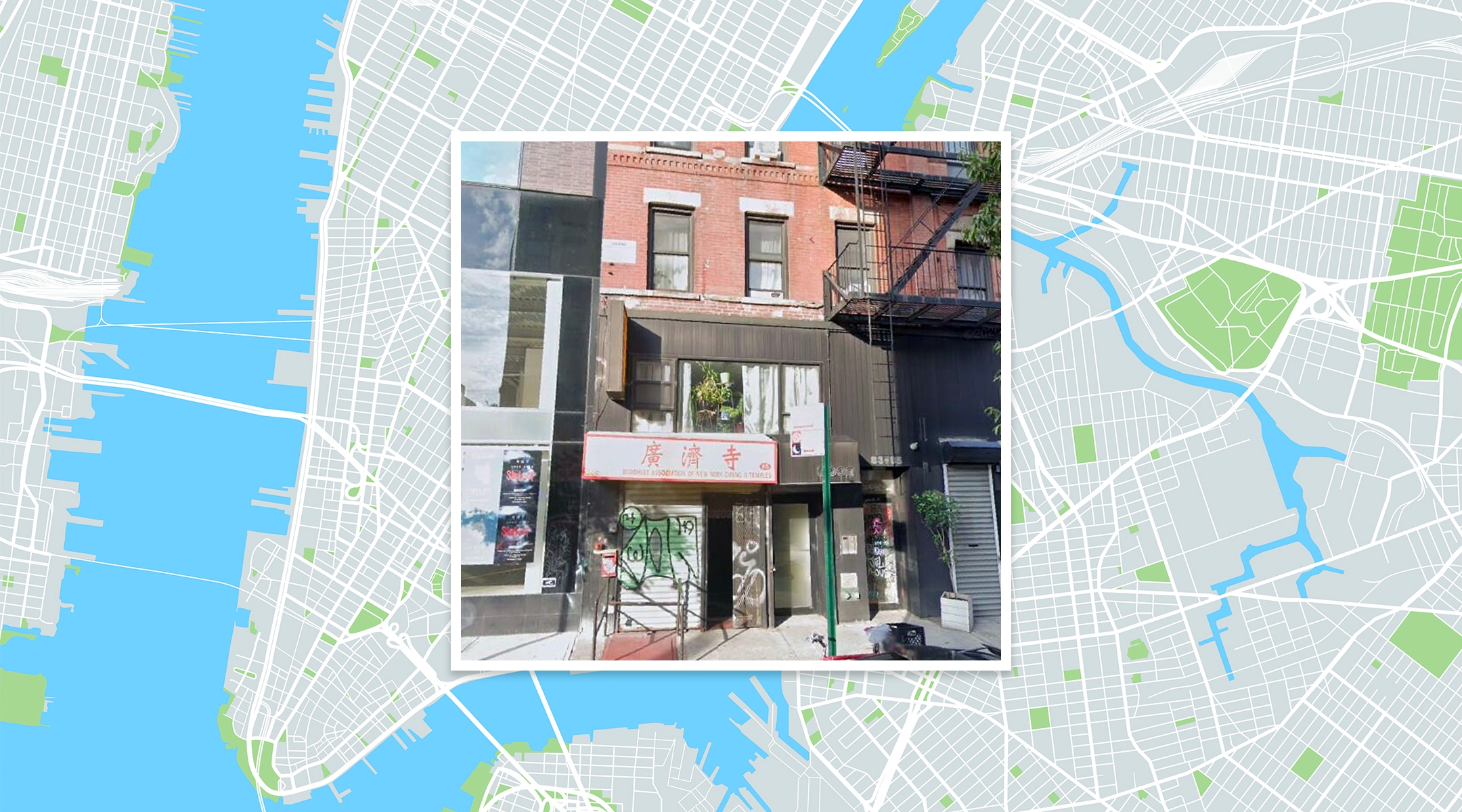 The Buddhist Association of New York, at 85 Hester St. on the Lower East Side, is in a building that once housed the Linas Hazedek Anshe Sakolker congregation. (@OldShulSpots via Google)

So forget the white hair. And to cut to the chase here, you can also forget the Jewish part. Shreeve describes herself as a descendant of Mormon pioneer immigrants on her father’s side and “Irish famine immigrants” on her mother’s.

“This is honestly weirdly random even for me personally,” she said. “I have no family connections. I’m just a big fan of Jewish history.”

And why is that?

“Because I am a huge fan of Yiddish,” she said. “I needed to take a language class. When I heard that my school in Austin was teaching a language with less than 2 million speakers, I thought it was a rare and unique opportunity to learn a niche language.”

Her professor was Itzik Gottesman, whom it turns out I knew when he was an editor at the Yiddish Forward and is a notable figure in New York Yiddish circles. Shreeve had read an article that Gottesman had written about how synagogues in Brooklyn had become churches, gymnasia and YMCAs. For a separate geography course, she decided to combine mapping with what she learned in Yiddish class.

(Gottesman referred to Shreeve in an email as a “star student.”)

On her own website, Shreeve explains the impetus behind the project.

“People following this bot get regular reminders that New York City used to be … different. Different people lived and gathered there and had a different way of life,” she writes. “This bot encourages people to explore their own cities and wonder ‘What used to be here? Who gathered here?’” 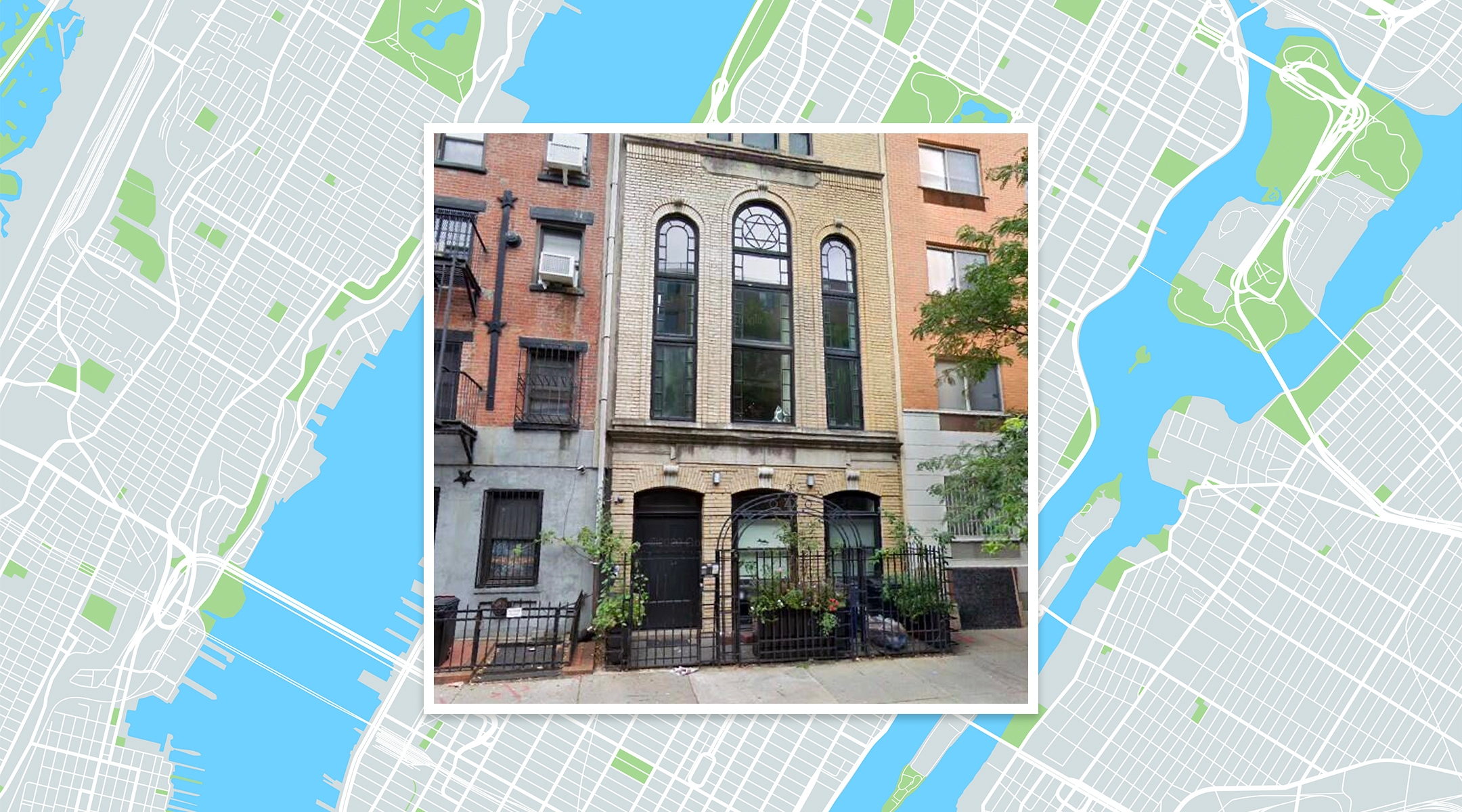 At 317 E. 8th St. in the East Village, you can still see the tall sanctuary windows and Star of David from what had been the Anshei Kalusz Lechetz Yosha congregation. (@OldShulSpots via Google)

I find the site addictive. Every address can lead you down a rabbit hole, discovering along the way layers upon layers of New York Jewish history. And it is not just ghosts in empty sockets: Occasionally there are signs of the original synagogues. At 317 E. 8th St. in the East Village downtown, you can still see the tall sanctuary windows and Star of David motif that now provide a funky historical motif for a condo owner’s living room. The Anshei Kalusz (people of Kalusz, Ukraine) Lechetz Yosha building was sold to a developer by its Orthodox congregation in 2000 following a battle with a rabbi and medical marijuana activist who had hoped it would become a nondenominational worship space for artists and other creatives. It was the last synagogue in the once gritty Alphabet City neighborhood.

At 58-60 Rivington St., plaques representing the Ten Commandments and two roaring lions of Judah mark what had once been the Warschuer (Warsaw) Congregation, which itself had supplanted a congregation from Jassy, Romania. The original congregation had hired a young architect to design the current building in 1903. That architect, Emery Roth, would go on to build various New York landmarks, including the Ritz Hotel Tower and The Beresford. Some 10,000 people attended the synagogue’s dedication.

After the Warschuers inherited the building in what appears to have been a hostile takeover, it became a favorite for local celebrities, including the Gershwins, Sen. Jacob Javits and the comedian George Burns. Or at least that was the shul they didn’t go to.

The neighborhood changed, and by 1973 the building was derelict. It was bought by the artist and metalworker Hale Garland in 1979 and apparently still functions as an artist’s studio.

Happily, some of the addresses aren’t ghosts at all. There is still a synagogue at 137 E. 29th St. Congregation Talmud Torah Adereth El says it has held services at the same location (albeit not the same building) since 1863 — the longest continuous service at the same site in the city. New York’s oldest congregation, Shearith Israel, the Spanish and Portuguese Synagogue, was established in 1654, but it has only been in the same location since … 1897. 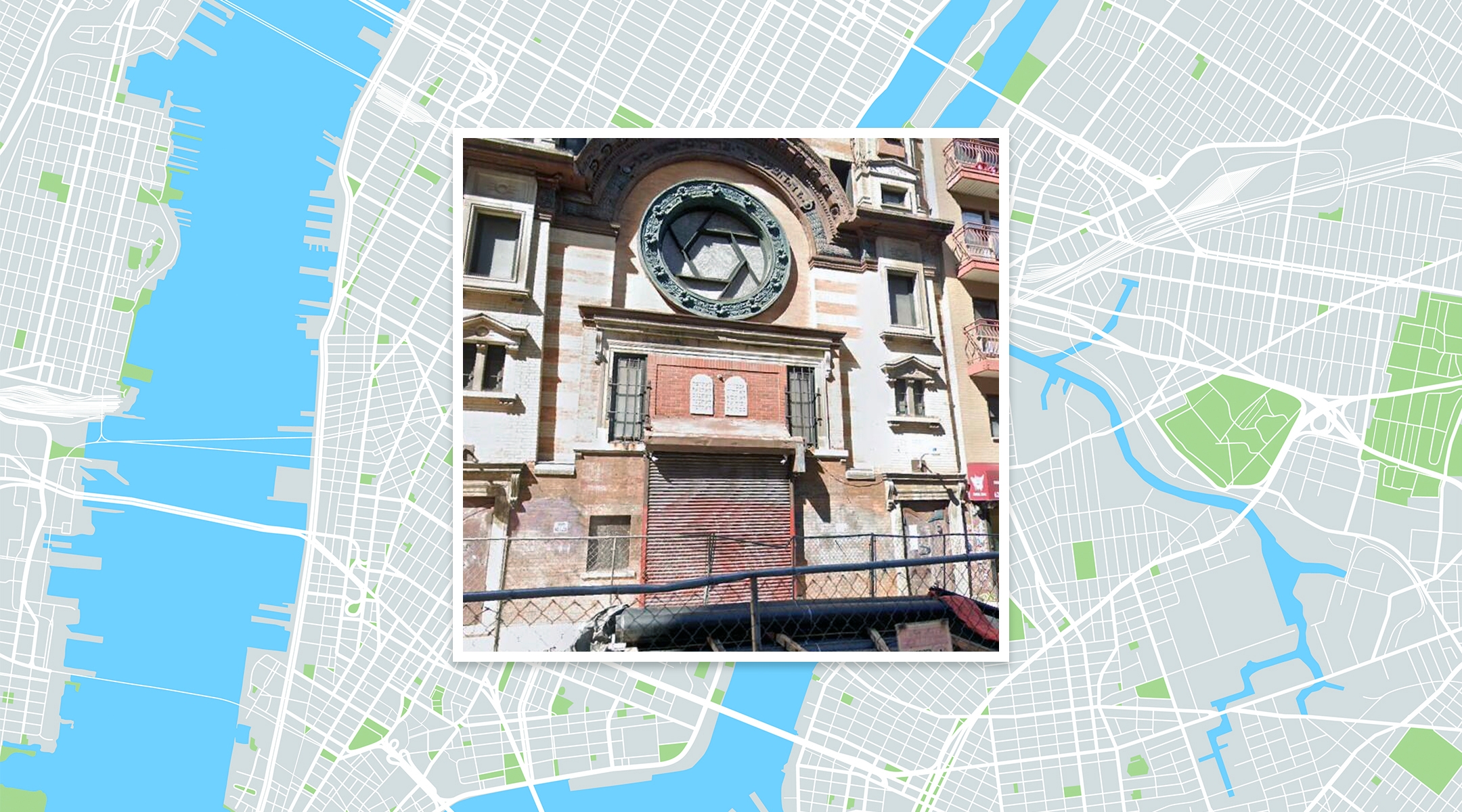 At 58-60 Rivington St., plaques representing the Ten Commandments and two roaring lions of Judah mark what had once been the Warschuer (Warsaw) Congregation. (@OldShulSpots via Google)

And yet most of the tweets feature gas stations, apartment buildings, housing developments and churches where Jewish communities flourished, struggled and eventually moved on, replaced by other groups and institutions that represent the city’s never-ending process of regeneration.

If there is a connection for Shreeve between old Jewish New York and present-day Austin, it is in the experience of immigrants.

“The demographics of New York are different [than Austin], but you still see how immigrants totally change the landscape,” she said. “Comparing the history of the Jewish people and Hispanics and immigrant at large, you see how history does have a tendency to repeat itself.”

Shreeve has 1,016 entries in her database and said she expects the project to wind up soon. She hopes to find records for the other boroughs, especially Brooklyn, although a notoriously inept remapping of Brooklyn’s streets in the mid-1800s might make that project impossible.

She also hopes to get to New York one day, perhaps when the pandemic is really over.

“Looking at a map is not the same as walking the streets and seeing that what is currently a movie theater or a parking lot once housed minyans or charity organizations,” she said. “I want people to reflect on the space, and to think of the immigrant stories and religion stories that came from there.”