20 years ago, a deadly suicide bombing shook Israel. Here’s how we covered it. 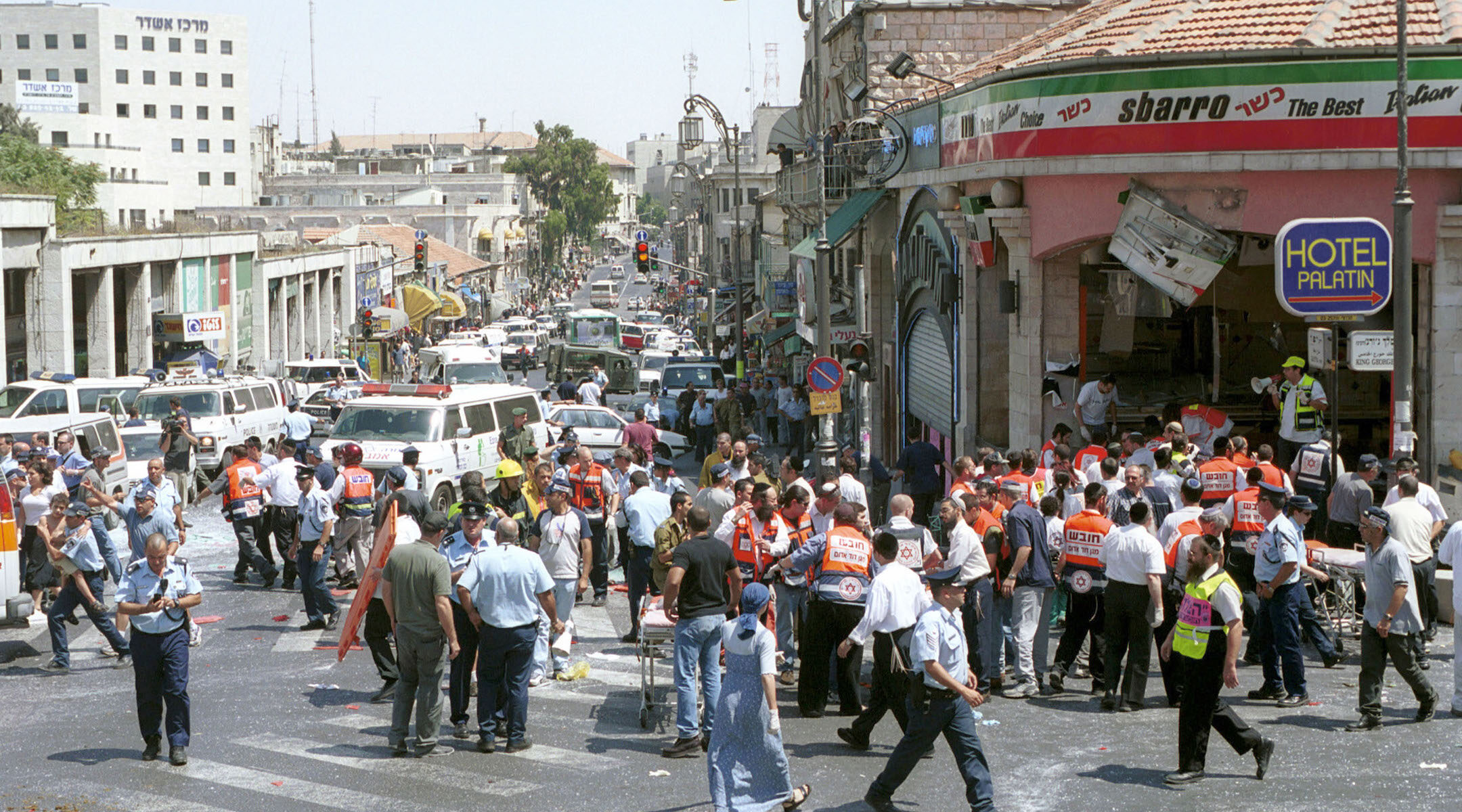 Israeli medics and volunteers treat the injured at the site of a Palestinian suicide bombing at Sbarro pizzeria on August 9, 2001 in Jerusalem, Israel. (Getty Images)
Advertisement

(JTA) — Twenty years ago today, a deadly suicide bombing in Jerusalem plunged Israel into grief and, for its citizens, crystallized a feeling articulated by the city’s mayor: “We are in a war.”

The attack at Sbarro pizzeria on Aug. 9, 2001, which killed 15 civilians and injured more than 100, occurred in a world and an Israel that looked very different from today’s.

Less than a year earlier, President Bill Clinton was still making a final push for a comprehensive Israeli-Palestinian peace. Israeli Prime Minister Ariel Sharon, who had taken office just months before, was still known as a fierce pro-settlement hawk — not the leader who would one day evacuate Israeli settlements in the Gaza Strip.

In the months and years afterward, the Sbarro bombing would come to be seen as a turning point in a renewed period of terrorism, in which Palestinian attackers carried out major suicide bombings regularly and hopes for peace crumbled.

Coverage of the bombing and its aftermath in the Jewish Telegraphic Agency showed how the bombing was experienced at the time — and how it shaped Israel and Jews in the years that followed.

‘There was not enough time.’

When a suicide bomber tripped the device that tore through the pizzeria, Israelis were already grappling with the second intifada, or Palestinian uprising — and reeling from a series of bombings across Israel. But aside from a June suicide attack at the Dolphinarium, a Tel Aviv disco, which killed 21 people, most of the bombings had few casualties.

The Sbarro attack’s death toll was the second-highest of any attack thus far that year and showed that the Dolphinarium bombing was no longer an isolated event. JTA’s coverage that day demonstrated the shock Israelis felt at the bombing and their understanding that more attacks could be on the way.

“I saw so many babies in an awful state,” one emergency volunteer told JTA at the time. “I wanted so much to help save them all, but there was not enough time. I saw dead and wounded, an experience I’ll never forget.”

In the days and months after the attack, Israeli officials appeared to hold out hope that Israeli-Palestinian peace talks would resume, and one Israeli government minister said Israel’s response to the attack should be “reasoned.” But Jerusalem Mayor Ehud Olmert suggested in a statement near the scene of the tragedy that Israelis would have to steel themselves for more attacks.

“We tried to do everything to prevent it. Unfortunately, this time we were not successful,” said Olmert, who would later become prime minister before resigning in the face of corruption charges. “I fully understand the pain and concern and fear of many people,” he said, adding that “we are strong” and “nothing will break us.”

A sense of familiarity

The bombing struck at the heart of Jerusalem’s touristy commercial district, and resonated with American Jews more than previous ones. It occurred at a busy intersection, near Ben Yehuda Street, familiar to American Jewish tourists. Sbarro was a familiar brand back home.

A JTA article about the victims, published about a week later, focused on Shoshana Greenbaum, 31, a pregnant victim of the attack from New Jersey who was spending the summer in Jerusalem as part of a master’s degree program. Another American immigrant to Israel, the New York City-born Chana Tova Chaya Nachenberg, is still in a coma 20 years after the attack as a result of her injuries. A third victim, Malki Roth, 15, was also American.

“She spent her whole life helping people,” said one of Greenbaum’s childhood friends. “She was beautiful inside and out.”

Thirty-three days after the Sbarro bombing, the world was shaken by a far deadlier attack — on Sept. 11, 2001.

For Israelis, the Sbarro bombing was a touchstone in processing the tragedy in the United States. And for American pro-Israel advocates at the time, it was a symbol of how the two countries were in a shared fight against terrorism. Three days after hijackers brought down Manhattan’s World Trade Center towers, the Sbarro branch would reopen following repairs.

“This is like hundreds of times worse than the Sbarro bombing,” Ashira Keyran, a Jerusalem resident, told JTA in the aftermath of 9-11. “It’s about intense hatred of America, and they don’t deserve that kind of hatred. No one does.”

The Sbarro attack entered American political discourse as well. About a month after 9-11, JTA reported that pro-Israel advocates “hoped the Sept. 11 terror attacks in New York and Washington would increase empathy for the Jewish state’s plight and loosen the reins in Israel’s fight against terror.”

When the U.S. continued to criticize Israel’s targeted assassinations of terror group leaders, pro-Israel officials accused the Bush administration of “hypocrisy,” and one cited Sbarro.

“Why is it wrong or, in State Department terms, counterproductive, for Israel to target the terrorists who bombed the Sbarro pizzeria in Jerusalem and the Dolphinarium discotheque in Tel Aviv, but right for us to target the terrorists who attacked the World Trade Center in New York and the Pentagon in Virginia?” said Rep. Gary Ackerman (D-N.Y.). “Is it hypocrisy, or is it just inconsistency?”

And more than six years after the bombing, it still held resonance for Jewish voters. In the heat of the 2008 Democratic presidential primary race, JTA reported that former U.S. Ambassador Stuart Eizenstat, a Hillary Clinton supporter, cited her visit to Sbarro after the attack as evidence of her pro-Israel bona fides.

The Sbarro bombing was the second attack in Israel that year with more than 10 dead. Others would follow in the months ahead — sending Israel into the worst wave of terrorism it had ever experienced and prompting a military offensive against Palestinian terror groups in the West Bank.

In the years that followed, the impact of the attack faded for the general public. In 2004, the Sbarro franchise relocated to another spot in Jerusalem. By the attack’s twelfth anniversary, Sbarro had encountered financial issues and closed its branches in Israel, which had been taken over by another licensee and renamed “Il Fresco.”

In a first-person reflection published five years after the bombing, Frimet Roth, the mother of the teenage victim Malki Roth, acknowledged that Israel was then in the midst of fighting a different enemy — Hezbollah, in Lebanon.

Roth also worried in the article that one of the perpetrators of the Sbarro attack, Ahlam Tamimi, would be released in exchange for the captured Israeli soldier Gilad Shalit. That ended up happening five years later, when Israel swapped more than 1,000 prisoners for Shalit, who was held by Hamas. Tamimi now lives in Jordan.

Roth wrote in 2006 that the families of the victims “have been grappling with grief.” Even as the years pass, she wrote, “Encountering other Sbarro victims strengthens my resolve to keep the memory of this crime alive.”