‘My Unorthodox Life’ joins a long history of depicting, and distorting, Orthodox Jews on stage and screen 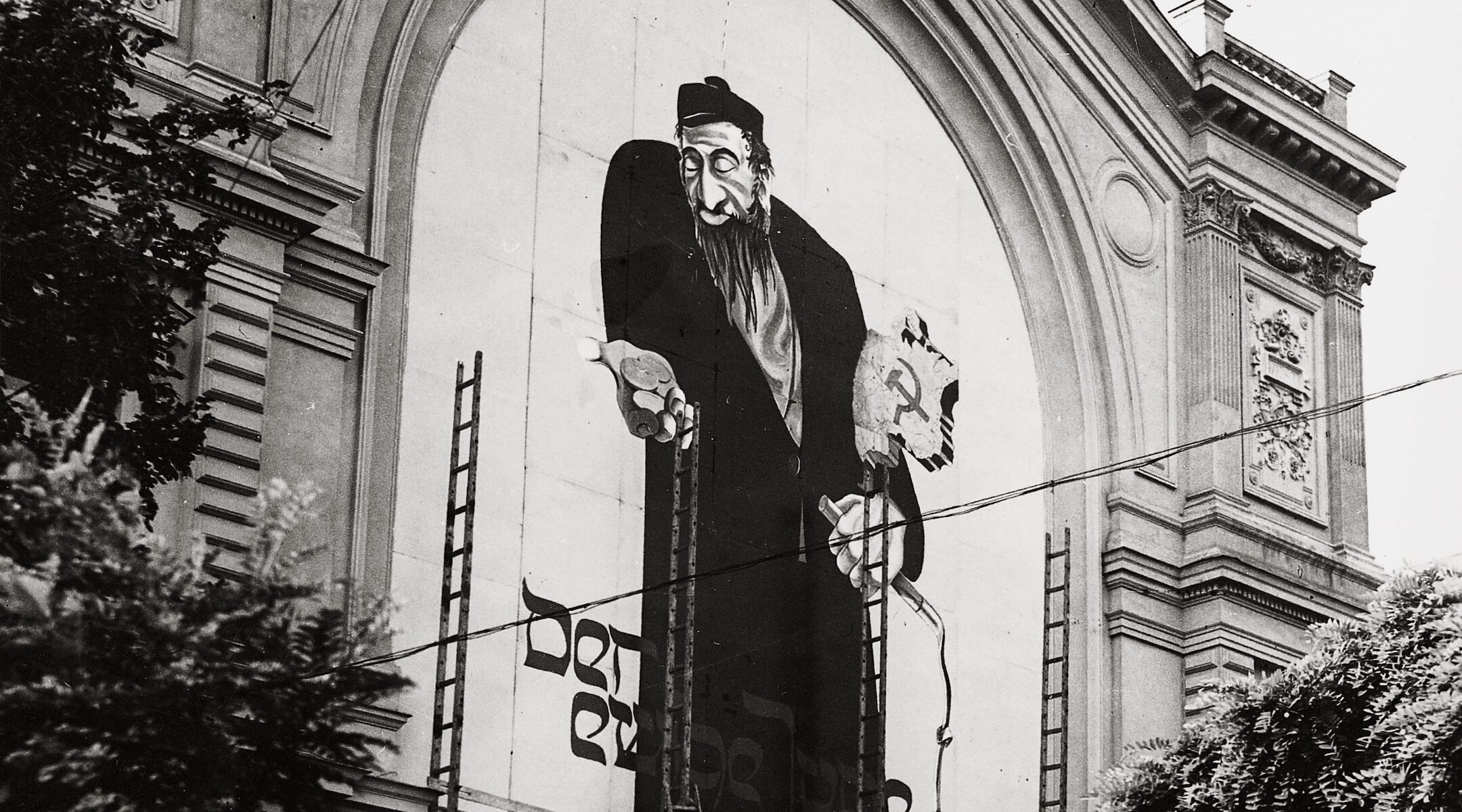 In 1940, a movie theater in Austria promotes "The Eternal Jew," an antisemitic propaganda film created by the Nazis. (Imagno/Getty Images)
Advertisement

(JTA) — Ex-Orthodox Jews seem to be everywhere these days. Many critiques of this summer’s hit Netflix reality series “My Unorthodox Life” have pointed out that its release came on the heels of “Unorthodox” (2020), the successful Netflix drama series about a woman who runs away from her oppressive religious life, and “One of Us,” the 2017 Netflix documentary about formerly Orthodox Jews who similarly “escaped” their religious communities.

Why the sudden obsession with Orthodox Jewish life, Netflix? The truth: This phenomenon is by no means sudden.

In fact, performances of religious Jewish life by nonreligious Jews can be traced to 19th-century Eastern Europe. One famous story from the 1860s tells of the “enlightened” Jewish performer Israel Grodner, who took to the stage during a performance in Romania to recite a Yiddish poem. The poem was a serious critique of Hasidism intended to be delivered in the “European” style of top hat and tails. Instead, Grodner decided at the last minute — “lightning fast,” according to one observer — to dress in a long caftan, shtreimel and faux payot, using comically exaggerated gestures as he recited a scathing critique of Hasidic Jews. The audience’s delight signaled a desire to laugh at the Hasid and not just deride him.

Often referred to as the birth of modern Yiddish theater, this performance demonstrates the secular Jewish viewers’ contradictory urge to embrace religious Jewish imagery lovingly and nostalgically while simultaneously critiquing it, reaffirming their choices not to practice that brand of Judaism. In the decades between the 19th-century Romanian stage and 21st-century streaming platforms, there are scores of depictions of religious Jews in film, television and theater that serve this dual function. And their approaches remain remarkably similar over time, relying on fashion and ridicule to signal the divide between the unmistakably religious and the ambivalently secular.

Of course, historical turns shifted the meaning behind the religious garb, language and gestures that mark such performances. Recalling Grodner’s “lightning fast” costume change, the Nazi “documentary” “The Eternal Jew” (1940) employed the same strategy to showcase presumed Jewish trickery. In one scene, a line of religious Jewish men magically transforms as their beards, sidelocks, caps and caftans fade from view. As the narrator ominously claims, without the Jewish garb, “only sharp-eyed people can spot [their] racial origins.” The Nazis saw the potential for Jews to “pass” in secular clothing as one example of the threat they posed to a pure Aryan society. Memories of such abuse of religious Jewish imagery may be part of what stokes fears of antisemitism from certain viewers watching the fabulous, sexy Julia Haart discuss her transformation from religious to “liberated” on “My Unorthodox Life.”

On Haart’s show, we see examples of the contradictions that colored performances of and about Orthodoxy for 150 years. Haart and her family simultaneously reject and embrace Orthodoxy in ways that recall Grodner’s performance. Without ever saying so, the show responds to the pernicious Nazi propaganda by asserting that Jews have nothing to hide (and, if we were to ask Haart, Jewish women may have an obligation to expose everything).

Haart is open about how her rejection of a certain type of religious Jewish life does not mean she rejects Judaism or others’ practices. Unlike earlier performances of ex-Orthodoxy, “My Unorthodox Life” depicts a spectrum of Jewish religiosity from yeshivish Orthodox to Modern Orthodox to entirely secular. Her religiously ambivalent children run the gamut of Jewish practice: Is her daughter Batsheva’s husband “ready” for her to wear pants? Is her son Shlomo open to dating? Can the observant teenager Aron befriend a girl and still be the pious Jew he aims to be?

By contrast, both Grodner’s performance and the Nazi propaganda offered black-and-white options for Jews: They could be undeniably religious in look and sound, or be fully secular, detectable as Jewish only by “sharp-eyed” viewers. “My Unorthodox Life” challenges such black-and-white depictions.

From Grodner to “The Eternal Jew” to Woody Allen’s famous transformation into a Hasid in “Annie Hall,” the “lightning fast” costume changes that indicate indisputable Jewishness take place on the bodies of men. Photographs from Haart’s Orthodox past, like her wedding photo, reveal just how subtle women’s religious garb can be. While Orthodox Jewish men’s garb is instantly legible to most viewers, the modest dress, wigs and head coverings of Orthodox women are not. “My Unorthodox Life” leans on colorful, revealing women’s fashion — such as the tiny, bright green romper Haart wears to shop at a kosher market in Monsey, Norkw Y. — to differentiate its secular protagonist from her former “modestly” dressed Orthodox self.

A feminist critique might see these fashion choices as evidence that poor Julia is beholden to patriarchal, hypersexualized ideas of how women should dress, whether entirely covered or entirely on display. A more generous take: Because depicting religious Jewish women is more challenging than the “lightning fast” costume change that turns a religious man into a secular one, “My Unorthodox Life” shows viewers a range of approaches to Jewishness. Many viewers were no doubt unaware of the diverse women’s dress codes in Orthodoxy until Haart was seen flouting them.

Given the importance of dress in Orthodox life, it’s no surprise that a show about a woman who has left Orthodoxy would also be a show about fashion.

Of course, “My Unorthodox Life” is not about Orthodox life at all. As Haart herself has explained, it is about her life after leaving. Like many reality shows, “My Unorthodox Life” serves up a fantasy world of extreme wealth and sexual exploits, with carefully contrived family drama that keeps the viewer coming back for more. Yet the Orthodox specter haunts the show. Who do we imagine Julia once was? What did her life look like before? The show skimps on those details, although American audiences have become so fluent in the visual vocabulary of religious Jews (read: men) that the black hats and long beards no longer need to appear on screen for us to imagine their outsized presence.

Depictions of religious Jews, as old as Jewish theater itself, reveal the limits and possibilities of gender and sexuality in performances of religious life. Reality TV fans might recall 2013’s “Princesses: Long Island,” a Bravo series about wealthy Orthodox women and their various dramas with men, careers and friendship. Rumors have just started spreading that an Orthodox woman will be joining the cast of “The Real Housewives of Dallas” next season. Such shows provide a version of “reality” audiences crave and feed the assumptions that viewers are meant to hold about Orthodoxy, even when no Orthodox Jew appears on screen.