9/11 musical ‘Come From Away’ returns to stage and screen, with Jewish values at the center of its story The cast during the "Come From Away" Broadway opening night curtain call at the Gerald Schoenfeld Theatre in New York City, March 12, 2017. (Walter McBride/WireImage/Getty Images)
Advertisement

(JTA) — When U.S. airspace closed as a result of the attacks on the World Trade Center on Sept. 11, 2001, 38 planes were grounded in Gander, Newfoundland, stranding nearly 7,000 international travelers “on the northeast tip of North America.”

So begins the story of “Come From Away,” the Tony Award-winning Canadian musical chronicling the real experiences of those “plane people,” and of the good-hearted locals who took them in.

With a filmed version premiering Friday on Apple TV+ to commemorate the 20th anniversary of 9/11, and the musical returning to Broadway Sept. 21 after suspending its run last year due to COVID-19, more audiences than ever before are about to be exposed to the show’s unique brand of warmhearted hospitality — and to its fundamentally Jewish roots.

David Hein, half of the Canadian Jewish couple who wrote the show, explained that “Come From Away” draws from both Jewish and Newfoundland traditions.

“There’s a line in our show of, ‘If a stranger ends up at your door, you welcome them in,’” Hein said. “That’s important in communities that have defined themselves as willing to help one another.”

Hein and his wife and writing partner Irene Sankoff got their start in theater with a much more explicitly Jewish show: the autobiographical “My Mother’s Lesbian Jewish Wiccan Wedding.” That musical, which had a successful tour in Canada in 2009, tells the story of how Hein’s mother rediscovered her Judaism when she came out to her family and met her now ex-wife.

“I think for a long time it was a surprise for me that suddenly my mom was learning Hebrew and that she was singing at temple,” said Hein, who grew up non-practicing. “It’s been really wonderful to explore those traditions with her, and every year we celebrate Hanukkah and Passover with her, and whenever we come down we have seders.”

Sankoff grew up in an interfaith family — her father is Jewish — and also celebrated Passover and Hanukkah growing up. She pointed to both her and Hein’s families’ experiences escaping “countries that no longer exist” as a formative aspect of their Jewish identities.

“You just say, in a different situation this was me, and this was my people. And you look out for people as best as you can,” she said.

That theme is clear from the opening number of “Come From Away.”

The story is ultimately one about human kindness and pulling together in the face of tragedy. It is a show not directly about the events of 9/11, but rather its ripple effects around the world, and about the people who responded to help those in need.

In other words, “Come From Away” is about welcoming the stranger — those who physically “come from away.” And the inherent Jewishness of that message is no coincidence.

The show begins by introducing us to the small, tight-knit community of Gander: the mayor, the police constable, a teacher, a rookie television reporter and others. It’s the morning of Sept. 11, and the townsfolk barely have time to grasp what has happened before they are forced to prepare for unexpected guests.

“With thousands of passengers arriving at any minute, the town is asking for help with — well, anything you can do,” the reporter says during one of the opening numbers.

The Gander locals don’t hesitate. They begin gathering everything from food and blankets to toilet paper, diapers and tampons. As the ensemble sings later in the same song, “If a stranger ends up at your door, you get on the horn.” The telephone, that is.

The idea of welcoming the stranger is deeply Jewish. The Torah mentions the concept no fewer than 36 times, and there are reminders throughout Jewish text and tradition that “you know the feelings of a stranger, for you were strangers in the land of Egypt” (Exodus 23:9).

It’s also a Newfoundland tradition, Hein explains. As a large island, Newfoundland often faces harsh winters that can make food production difficult. When you know what it’s like to not have enough, you are more inclined to share, he said. 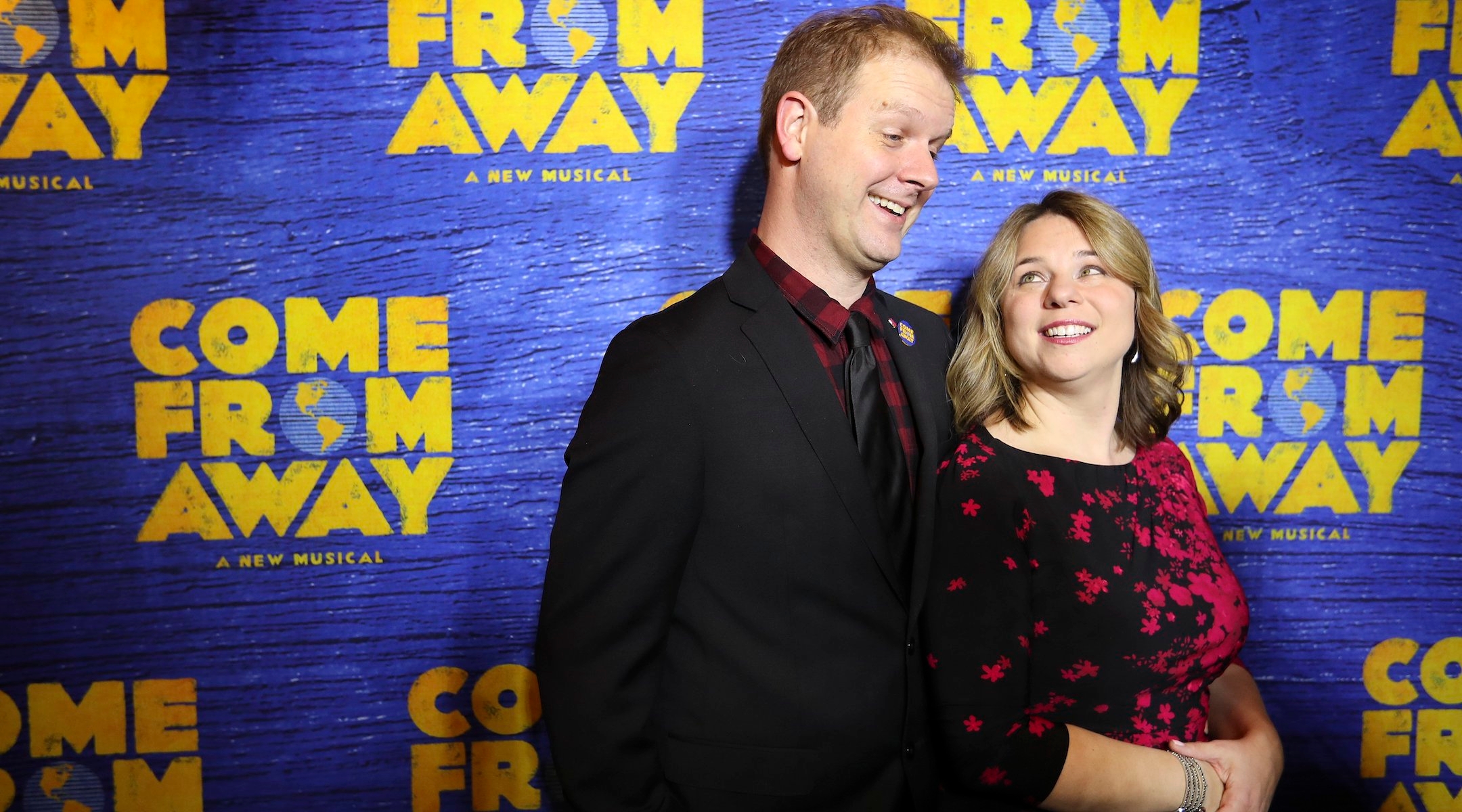 To research the show, Hein and Sankoff traveled to Gander for the tenth anniversary of 9/11 in 2011, interviewing as many people as they could, and distilling many of their stories into the musical that has now performed worldwide. Including the 9,000 local Newfoundlanders and 7,000 unplanned visitors, the pair joked that they were telling 16,000 stories.

“But it really felt that way,” Hein said. “Every story was better than the next.”

One such story was that of Rabbi Leivi Sudak, a British Chabad rabbi who was traveling from London to New York to visit the grave of the Lubavitcher Rebbe, Rabbi Menachem Mendel Schneerson.

In the show, the viewer meets Rabbi Sudak when Beulah, a teacher and a main organizer of the emergency efforts, is listing some of the options the guests had to eat. Someone points out a kippah-wearing man who hasn’t eaten anything.

“Turns out he’s an Orthodox Jewish rabbi, and he only eats kosher food,” Beulah explains to the audience (the show doesn’t so much break the fourth wall as reject its existence outright). Newfoundland is home to many faiths, Beulah says, but not many Jews.

So the rabbi is given space to create a kosher kitchen, where he helps provide food for Jewish passengers as well as a handful of Hindus, Muslims and vegetarians.

Though Hein and Sankoff never met Sudak while writing the show, the rabbi himself told the New York Jewish Week that the depiction is an accurate one.

And it sets up the show’s emotional climax: a moving medley that overlays three different religious prayers for peace, including “Oseh Shalom.” In the midst of the prayer, Ed, an old man from Gander, seeks out Rabbi Sudak to share something he hasn’t even told his wife: he’s Jewish. He was born in Poland, and his parents sent him away before the war.

As the men sing together, the rabbi hands Ed a kippah.

The “Prayer” scene encapsulates not only the diversity of the strangers sent to Gander, but also the radical openness of the community that was created amongst the islanders and the visitors (alternately referred to in the show as “plane people” and “come from aways”).

“Telling that story instantly resonated with us,” said Hein. “It was one of the many, many stories that we were like, ‘This needs to be in here, this is a very special point.'”

In real life, not only did Sudak give Ed a kippah — he also kept in touch with the man, and later gifted him a Jewish prayer book and tallit. Years later, Ed’s son told Sudak that his father was buried wearing the kippah and tallit.

There was one minor tidbit about Sudak that the play does not mention. His return flight to London was scheduled for a Saturday, which posed a challenge for the Shabbat-observant rabbi. If he missed that flight, he would still be in Gander on Rosh Hashanah.

But his new friends stepped up yet again: they drove Sudak and two other observant passengers 500 miles to an airport.

“And thanks to them I walked into my in-laws’ home in Brooklyn seven minutes before candle lighting on Erev Rosh Hashanah,” Sudak told the Jewish Week.

This year, the Broadway return of “Come From Away” and its debut on Apple TV+ — filmed for an audience of 9/11 survivors and first responders — also intersect with the High Holidays. But its creators will be back in Gander, where a ceremony commemorating the events of the show is taking place.

Hein and Sankoff added that the message and production of their show only gains meaning during the Jewish new year.

“We are renewing,” said Sankoff. “We’re going back to Broadway, but we’re hopefully going back stronger, going back more inclusive, with more diversity, with more compassion for one another.”

The idea of starting anew feels relevant on multiple levels: Rosh Hashanah, the gradual reopening of a society plagued by COVID-19 and the widely popular show returning to the stage and debuting on the screen.

“Hopefully, the concept of a new year [provides] the opportunities to change and remember what we can be,” said Hein. “That we can be better, that we can come together in more ways than we can possibly imagine.”

“Come From Away” is now available for streaming on Apple TV+ and returns to Broadway Sept. 21.