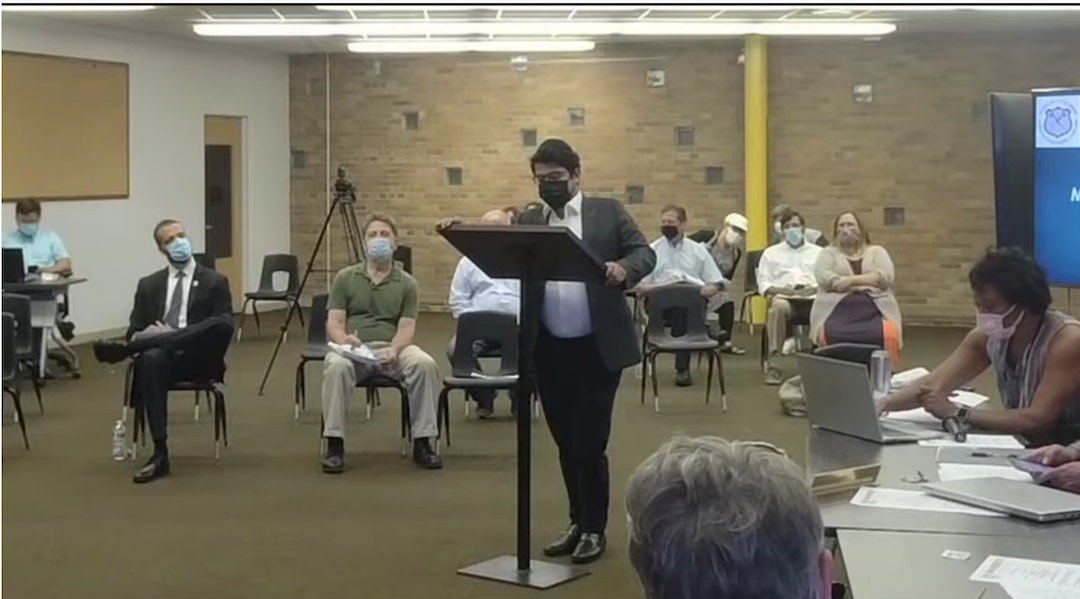 Rabbi Eric “Yitz” Frank addresses the City Council of University Heights, Ohio, on Sept. 9, 2021, saying women and children were traumatized by the presence of an unmarked SUV outside a local Orthodox synagogue on the first day of Rosh Hashanah. (Screenshot via Cleveland Jewish News)
Advertisement

(Cleveland Jewish News via JTA) — An Ohio city hired a private investigator to observe Jews entering and exiting a local synagogue on the first day of Rosh Hashanah as evidence for an ongoing lawsuit, outraging Orthodox Jews there and further inflaming tensions in a local dispute over worship protocols.

University Heights officials said the investigator, who had been hired by the mayor at an undisclosed cost, was there to monitor the number of people entering the Aleksander Shul to determine if the congregation was adhering to court-ordered rules on maximum occupancy. The city also said the community outrage was the result of miscommunication stemming from the local federation’s failure to alert the synagogue to the investigator’s presence.

The Aleksander Shul has had a long, drawn-out dispute with University Heights, an area with a large Jewish population and many synagogues. Operating out of a private residence, the synagogue was cited in 2019 for not complying with local code and zoning ordinances that prohibit a private residence from serving as a “house of assembly.” Earlier this year, the city tried to block its operation and fined the shul’s owner $65,000 over building code violations — he has appealed the fine — as a prelude to suing the Aleksander Shul in June.

In addition to operating unlawfully as a house of assembly, the suit alleges, the synagogue also performed work and construction without building permits or city inspection. Lawyers for the Aleksander Shul countered that the mayor was discriminating against Orthodox Jews.

After attempting to shut down the shul in July, the city’s order was temporarily stayed on July 27 by a Cuyahoga County judge, who issued an amended order that allowed the Aleksander Shul to continue operations on Shabbat and the High Holidays through Sukkot, provided maximum occupancy in the building was limited to 36. But the city said the worshippers violated the occupancy limit on Rosh Hashanah.

Yet it was the investigator’s presence that drew the ire of the local community.

“Mothers walking with their children to synagogue … were deeply traumatized by this event,” he said at the meeting.

Michele Weiss, the vice mayor of University Heights who is Jewish, criticized Brennan and the law firm that authorized the move at the council meeting.

“A city should not be spying on its own residents ever, especially during one of the holiest days of the year for our Jewish residents,” Weiss said at the meeting. “It’s unconscionable that if this was Easter or Christmas that this would even be contemplated. City Council is shocked by the behavior of the mayor and the outside law firm and will look at our options in dealing with the situation.”

Weiss told the Cleveland Jewish News that the situation could have been handled in other ways that would not have inspired fear. She added that she first heard about the investigator when neighbors came to her house on Sept. 7, the first day of Rosh Hashanah, to inform her.

“Wednesday evening I was just fielding phone calls and texts all night,” she said.

Weiss said she spoke with the police chief and law director on the morning of Sept. 9 “to understand what this meant.”

In a Sept. 13 email to CJN, Brennan laid the blame on the Jewish Federation of Cleveland’s security contractor, JFC Security. Brennan and other city officials said they had alerted the federation’s security director that an investigator would be present outside services at the Aleksander Shul. But the contractor, Brennan wrote, “did not disseminate word of this to those working in the field, resulting in the confusion the city expressly sought to avoid.”

Federation President Erika B. Rudin-Luria strongly disputed Brennan’s account in a Sept. 17 statement. “At no time did the Jewish Federation of Cleveland or its security provider, JFC Security, LLC, have any advanced, specific details of the mayor’s plan with the private investigator he hired to monitor certain members of the University Heights community,” Rudin-Luria wrote.

Brennan, who was not present at the Sept. 9 City Council meeting owing to the sudden illness and death of his father, told CJN that “the city nevertheless remains willing to go to mediation to bring about a mutually agreeable resolution.”

At the council meeting, Frank said it was incumbent on the city to foster a community feeling.

“We have a responsibility to take overt steps to promote our sense of community, sense of safety and unity, and this is just one sad example of that breakdown,” he said. “I’d like to make sure that this type of activity never happens again. And if residents continue to feel targeted or threatened, that in itself is a breakdown.”

A version of this story originally appeared in the Cleveland Jewish News. It has been reprinted with permission.