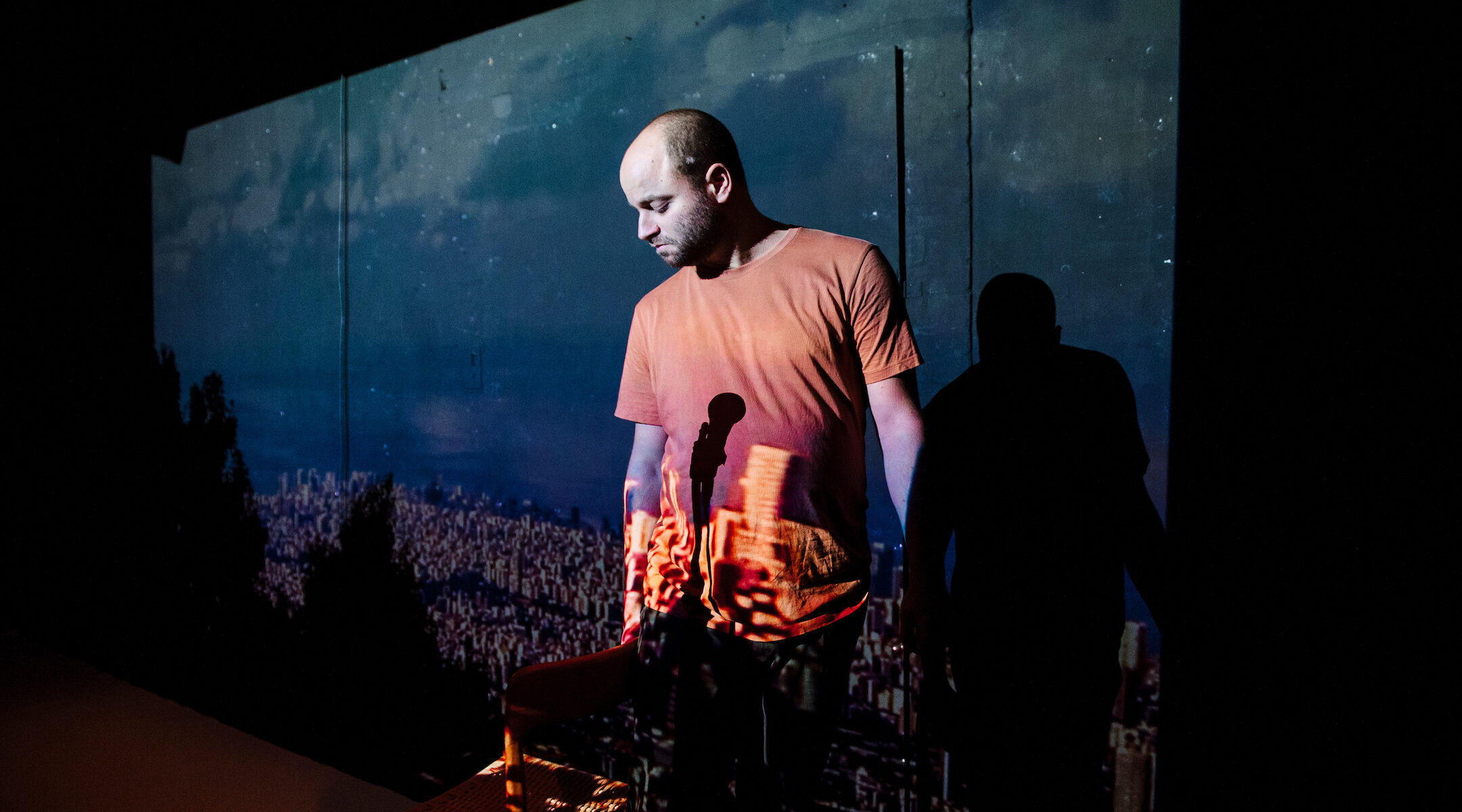 Victor Esses onstage for his one-man show, "Where to Belong," against a projected image of Beirut. (Alex Brenner)
Advertisement

LONDON (JTA) — Growing up in Sao Paulo, Brazil, Victor Esses’ Jewish parents told him stories about life in their native Lebanon, which they fled before he was born.

Esses’ father left Beirut in 1967, as the climate soured against Lebanon’s Jewish community, following Arab defeat in the Six Day War with Israel. By the time his mother’s family left in 1975, Lebanon had careened into civil war. Neither parent has ever returned.

Sao Paulo was home to a sizable Lebanese Jewish population. But Esses, then 34, felt compelled to visit Beirut on his own in 2017.

The fact that he is gay was putting distance between him and his parents, who had brought him up in a firmly traditional Orthodox Sephardic community.

That trip and Esses’ grappling with the many facets of his identity — Brazilian, Lebanese, Jewish, gay — is the basis of his latest play, “Where to Belong,” a one-man show that is playing at different venues in England, his new home country, through Oct. 14.

Set to the melodies of Lebanese divas and Brazilian classics and with a simple stage setup of a cassette player, projector, and laptop, Esses offers a vulnerable portrait of a man trying to find a space to be himself.

He tells a classically Sephardic story of migration, scattered families, and difficult relationships, all overshadowed by a nostalgia for a Lebanon his parents left behind.

As Esses performs, images of his trip to Lebanon flash on the projector. He tells viewers of how he made a Jewish circuit: visiting empty synagogues, the cemeteries, the streets of old family homes. There is a recording of a video call between him, his sister and his mother from her old home.

Yet, something feels empty.

He tells the audience how his partner was stopped in the street by a member of the Amal political party (not for looking Jewish). How he saw antisemitic literature in Beirut bookstores. How the community he had been told of when he was young was no longer there. His parents’ world no longer exists.

And for Esses, visiting Beirut was not just about tracing his parents’ past. It was also about finding out who he was.

“My body responded in such an emotional way to being in Beirut,” he recalled. Even now, when he rehearses, “I would fall into tears just thinking about it and feeling it inside of me.”

It feels fitting that Esses – who left home at 18 to pursue a theater career — ended up in London, a city that has become an unlikely hub for a new generation of Sephardic artists, such as fellow playwright Josh Azouz and Ladino-language band Yja.

Together, this new generation has been trying to tell the stories of communities that have vanished and scattered.

“There are these communities that disappeared from those places. They were very much part of the fabric of those societies. They were very connected. They lived in the centers of the cities, they were very engaged in daily life, until very recently,” Esses said.

The scattering of the Sephardic diaspora becomes apparent as Esses jumps in his play between places where he and his family haved live: Sao Paulo, Israel, London, Paris, Houston, Rome.

“I don’t think we usually have a lot of Sephardic stories in theater, in books, in films,” Esses says. “They are beautiful, powerful, lived experiences that we don’t hear. They are so rich. It’s this mix of cultures, even the idea of a Jewish person speaking Arabic which is so common for so many people — but that can seem so alien to so many others.”

While many Sephardic artists tell others’ stories, Esses is telling his own: his writing has been a way of negotiating a difficult relationship with his family. Throughout the performance, the distance between him and his parents grows wider. “I” begins to outweigh “we” in Esses’ monologue.

“Part of it was to embrace all parts of me. That’s a personal labor of this work,” he said. “I was questioning those boundaries with my family and within myself. It’s a constant work isn’t it? What do I need for my life today so I can have … a healthier wholesome life – all those questions were there.”

The performance’s confident tone is indicative of where he has ended up.

“It’s been a real healing process, and one of the points was absolutely to affirm all of my identities — and to do it unapologetically,” he says. “It is about figuring out and learning that I have choices. I don’t have to follow anyone else’s path.”

Esses wrote the play before COVID-19 took hold; before Lebanon’s massive financial crisis, or the explosion in Beirut that killed hundreds and injured thousands of others; and only just after Brazil’s far-right President Jair Bolsonaro, whom Esses opposes, had been elected.

“At times there is a need for some little adaptations and updates,” Esses admitted.

But he hopes that the pandemic might help him further connect with his audience.

“I think people will relate more to the changing situations in our lives. In the past when I was performing and I was talking about migration, some people could never see themselves forced to migrate,” he explains. “I think now with COVID and everything that’s been going on people can see how the world does change, and things can force us to move.”