In ‘Golden Voices,’ Russian movie dubbers reinvent themselves in Israel, to hilarious effect 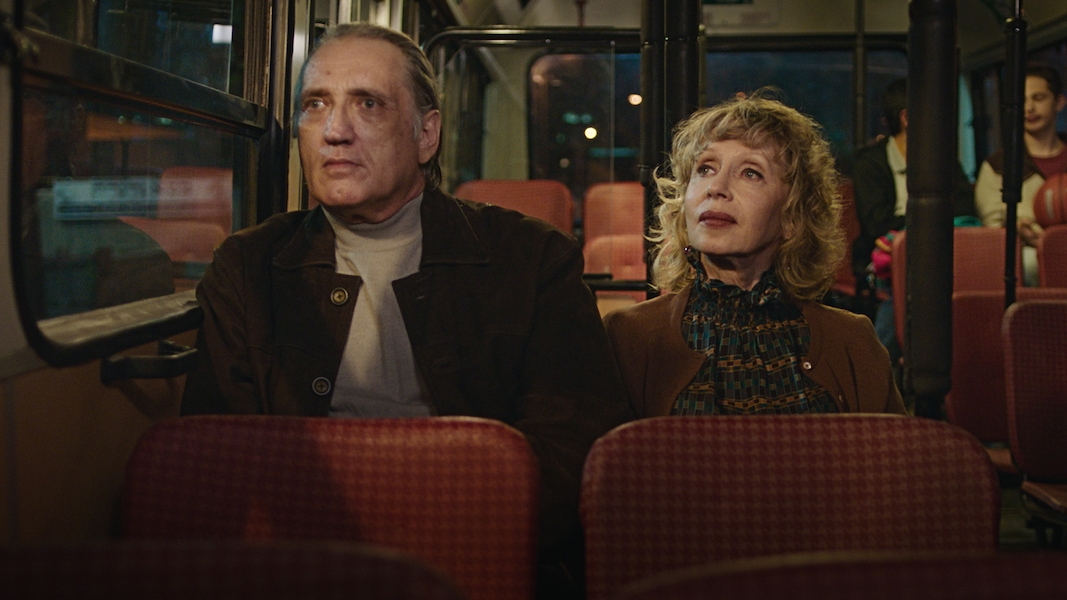 (JTA) — The familiar Jewish narrative of outsiders struggling to assimilate to their new homeland gets turned on its head in the charming Israeli comedy “Golden Voices.” Here, the strange, unwelcoming new land the Jews face is Israel itself.

The year is 1990, and married middle-aged couple Raya and Victor are new immigrants from the Soviet Union, which has just collapsed. With Israel suddenly playing host to an influx of new Russian-speaking migrants, Raya and Victor are our eyes and ears to this culture clash — and in a literal sense, our voices, too.

In the Soviet Union, the couple used their voices to make their living, dubbing classic movies into Russian to bring world cinema to their comrades. (“You turned Kirk Douglas into a great actor!” one of their fans gushes about their dubbing of “Spartacus.”) But in Israel, deprived of a use for their skills and forced to learn a new language, their finely cultivated chops are suddenly proven useless and the two become economically stranded, just like every other Russian migrant around them.

What do you do when your voice once brought pleasure to an entire nation, but now you can only speak to a small, marginalized sliver of your neighbors? Each protagonist finds a different approach to the question. Raya (Maria Belkin) finds work as a phone-sex operator catering to all of these new lonely Russian men; the scenes of her in the call center, using her theatrical background to assume the personas of whatever her clients desire, are a naughty delight.

Meanwhile, Victor (Vladimir Friedman) has a harder time letting go of his past — particularly once he stumbles upon a VHS rental store for Russian migrants that deals in pirated, crudely dubbed copies of the latest releases. Is he doomed to live in a celluloid past, like a Norma Desmond of the Negev?

“Golden Voices,” which is seeing a U.S. release two years after an award-winning Israeli run, is a unique immigrant story that taps into a rich vein of dramatic potential. Its director and co-writer, Evgeny Ruman, was himself born in the former Soviet Union and immigrated to Israel with his family in 1990; Ruman dedicates the film to his parents, clear inspirations for Raya and Victor. Both Belkin and Friedman are post-Soviet emigres in real life.

Both actors turn in performances that offer fully lived-in encapsulations of the late-in-life immigrant experience — which is good, because a film about actors lives and dies on the strengths of the actual actors playing them. Belkin’s gradual euphoria upon finding she enjoys her new erotic ventures is as touching as it is hilarious, particularly when Raya begins to develop feelings for one frequent customer. Most of her scenes are effectively solo performances, where she plays both the character her clients are calling for, as well as Raya herself, brimming with confusion and elation at her ability to conjure a sexy new life for herself through sheer pretense. (The actress was nominated for an Ophir Award, an Israeli Oscar, for her work.)

Friedman, meanwhile, captures not only the pain of Victor’s inability to blend into this new society, but also his gradual unease over his loss of identity as an actor. In one of the film’s many highlights, he tries to audition for a play with Marlon Brando’s “I coulda been a contender” monologue from “On The Waterfront.” He contorts his body and distorts his voice to deliver an uncanny Brando — if Brando were a burly, 60-year-old Russian — only to look flabbergasted when the director suggests, instead, that he play it as himself.

Evident throughout is Ruman’s careful plotting, love for his characters and wry, observational humor (Ziv Berkovich is his co-writer and cinematographer). Small, intimate moments with the couple create breathing room for big thoughts about the inequities of Israeli life; the hollow economic prospects of middle-aged workers and immigrants; the utter strangeness of leaving a lifetime spent under Communism; the never-ending scope of the Jewish diaspora; and the movies (and art in general) as both an object of utter rapture and a prison.

Nowhere do all of these moments collide better than when a beaming Victor, in the video store, shows off a photo of him and Raya with legendary Italian director Federico Fellini, proud of the role the two of them played in getting his “8 ½” past the Soviet censors. Because of them, Victor says, millions of people got to experience a masterpiece. His coworkers, themselves down-on-their-luck Jews trying to make their living in an unfamiliar land, only ask, “Who’s that?”