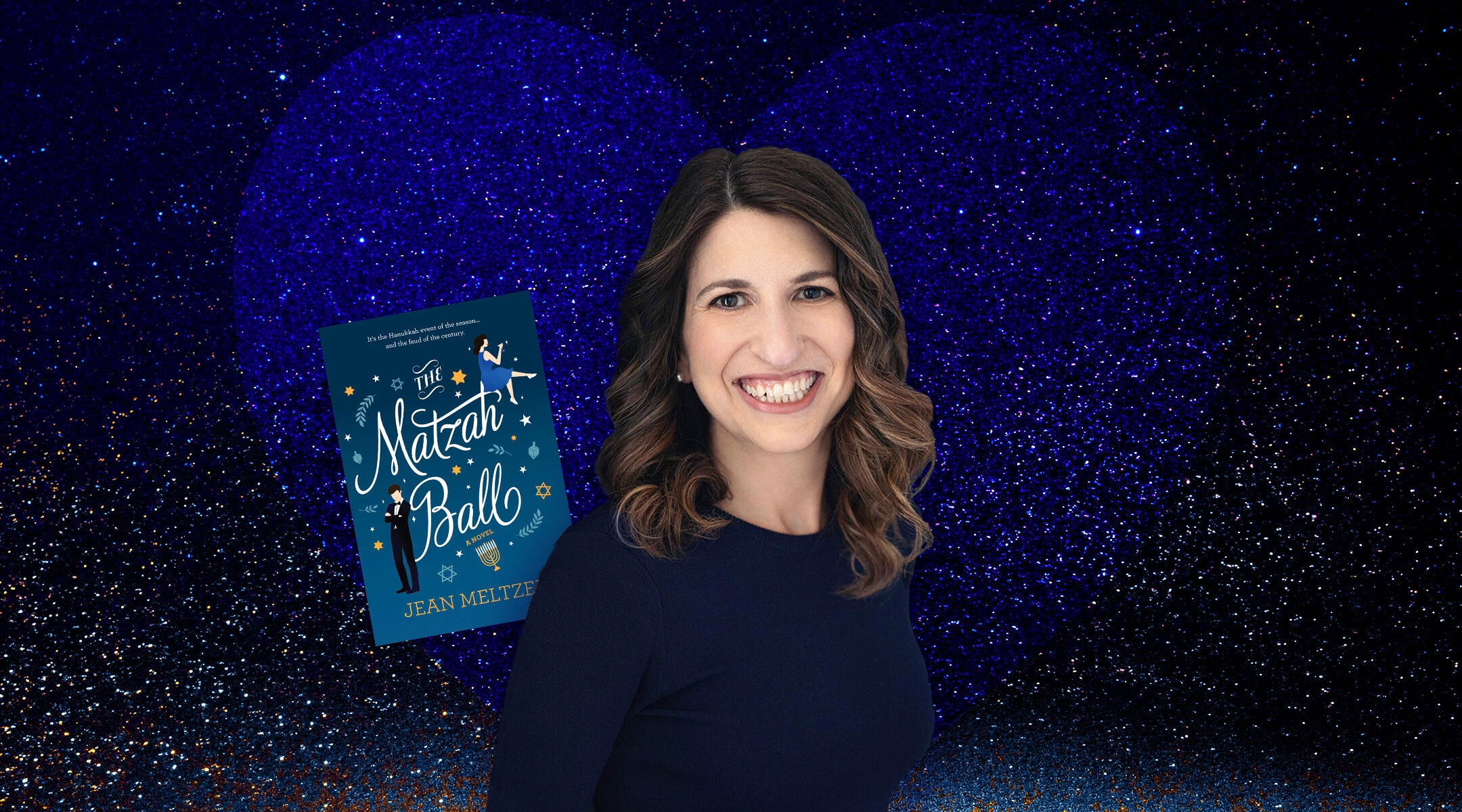 “The rule of romance is that there has to be a happy ending; the characters have to get together,” Meltzer told the Jewish Telegraphic Agency. “If they don’t get together, that’s not a romance; that’s literary fiction.”

So (not-really-a-spoiler alert) it was a foregone conclusion that protagonist Rachel Rubenstein-Goldblatt, a best-selling Christmas-themed romance writer who has kept her career from her observant Jewish parents, would wind up with Jacob Greenberg, her Camp Ahava crush who is now throwing the glitziest Hanukkah party New York City has ever seen.

But while Rachel and Jacob’s love story conforms to the conventions of the romance novel, Meltzer sees it as subverting traditional Jewish stories that more often dwell on the difficulty or danger of being Jewish.

“I wanted to write a book for Jews where the heroes were sexy, where the men were strong, where the women were beautiful, where they got their happy ending,” said Meltzer, a self-proclaimed rabbinical school dropout and Christmas junkie.

Meltzer also wanted to spotlight a character who, like her, struggles with chronic illness. Rachel’s myalgic encephalomyelitis, also known as chronic fatigue syndrome, is invisible to those who don’t know her but shapes her life in every way, much as it has for Meltzer, who was diagnosed as a young adult and describes herself as “basically homebound.”

Meltzer spoke to the Jewish Telegraphic Agency from her silver-tinsel-draped home office in Northern Virginia about the impetus behind “The Matzah Ball,” why she believes the Hanukkah bush has a place in Jewish homes and the power of romance novels to shape Jewish identity.

JTA: Why did you decide to write this book and what are you hoping to achieve with it?

Meltzer: I’ve always been a nice Jewish girl who loves Christmas. And every year I go into, say, Target, and there’s a holiday display with all of the Christmas books. Year after year, I went looking for a Hanukkah book, and there never was one. I just wanted to see myself represented on that table. I could envision it: a blue and white book in the sea of red and green.

I also had an experience where my 7-year-old niece was sitting on my lap and she looked at me and she goes Auntie Jean, you have a big nose, and big noses are ugly. She goes to Jewish day school, she’s surrounded by strong Jewish women, and I thought, where did she get this message?

So when I sat down to write this book, I wanted to do something different from the stories I had grown up with, which were Holocaust stories, stories where Jews were being taken hostage by terrorists — you never really saw us as the heroes of their own stories. I wanted to write a book for Jews where the heroes were sexy, where the men were strong, where the women were beautiful, where they got their happy ending. I wrote this book primarily for myself, but it was really out of a desire to sort of just create a different type of Jewish story.

Having worked with non-Jewish editors and seeing how people have reacted to the book, I can see now that I think in a very Jewish worldview that is very different from how the rest of the world thinks. Things that I sort of take for granted and nuances that I thought everybody would sort of understand, I had to realize and learn that that was not the case.

The book is very thoroughly Jewish — not just the characters and setting but the text, which is peppered with references to the Talmud and other Jewish texts. Who do you see as the audience?

At the end of the day I don’t know who the audience will be but I will tell you that absolutely non-Jews have picked up the book. Debbie Macomber is the queen of Christmas romance: She fell in love with the book, and not only gave me a blurb but she did my launch event recently.

The first international territory my book sold to was Sweden, which again is a place that you don’t think has a huge Jewish population, and it’s going to be [the publisher’s] Christmas lead in 2022. So, obviously, the book is resonating with non-Jewish readers and I think it’s been resonating with Jewish readers as well, which is the ultimate hope — that it reaches who it needs to reach.

I did not grow up in a family that had any type of Christmas or Hanukkah decor, but I love it now. Every year I start sort of scouring for, like, a new Hanukkah inflatable for the lawn, and every year it’s impossible to find something that’s good, that doesn’t look just like a tchotchke on my lawn. Even so, I’m very proud of my outdoor display — we have gone insane. We have giant blow-ups and we put up lights and it’s gotten to a point where people literally drive to see it.

In Jewish law, there are prohibitions against mimicking your foreign neighbors and things like that. So growing up I think that was very strong: There was a fear of assimilation and that having a Christmas tree, we were all going to go off and marry non-Jews and not be Jewish anymore. For me, I feel like I’ve done the work Jewishly, and I am very comfortable in my Judaism. So I don’t feel like the Hanukkah bush is going to be my slippery slope that’s going to push me over the edge and change my belief system.

But there is also a commandment of beautifying your holy objects, and then the commandment for Hanukkah lights is that you’re supposed to publicize the miracle, right? I’m not a rabbi, but you can maybe make an argument [in favor of Hanukkah lawn displays].

I’ve always been a person who likes pretty things, and especially with chronic illness and in the middle of a pandemic, holding on to my joy is such a big part of my life. And when I walk and it’s nighttime and the lights are twinkling, I feel it in my kishkes. It just makes me feel good.

If you were to pick a favorite moment in the book or the writing process, one that felt like a peak moment for you, what would it be and why?

The hardest thing for me to write, or what I think was the most important thing, was the bedazzled wheelchair. [Jacob sends a sparkly wheelchair to Rachel’s apartment after a flareup of her chronic fatigue leaves her unable to leave home.]

The problem of chronic illness is that it’s invisible. Because we’re invisible, our struggles are not fully seen and because they’re not seen, they’re not understood. So this idea that like, again, it’s almost like intersectionality of identity — we think of ourselves as Jewish, but we’re more than just Jewish. A lot of us have multiple identities. By making it visible, by showing that it’s so much more normal than we realize, that’s how we get people to understand that it’s part of our experience.

And when you’re chronically ill, that moment where you want to use a wheelchair is really the moment when you’re like “holy crap, I’m really sick,” and when your disability goes from invisible to visible. So I felt it was incredibly important and powerful that women who were chronically ill and sick could see that they could be loved, even in a wheelchair. And that it’s okay to accept your disability, and then also that a man or a woman or a partner will love you in spite of whatever your disability is, will love you through all the good and bad of your life.

It was the hardest thing to write because I had never seen anything like that in a romance, but I felt like at the end of the day it was the most important scene I wrote in the book.

What else would you want Jewish readers to know about your book?

It was written to create a joyous Jewish story. I know it’s different but I really think everyone should at least pick it up, give it a chance, give it a try. You might find that you actually like romance and romcom more than you realize. I know it’s new for the Jewish world.

I really think it’s important that young people and all of us see ourselves in stories beyond the lens of victimhood, and I really think that one of the ways we do that is by making ourselves heroes in our own stories. And this is a way to do that. Romance gives us the ability to become heroes and love interests, and champions of our own narrative.

I hope I’m not the only Jewish romance writer going forward. [Meltzer’s second book, “Mr. Perfect on Paper,” will come out next year, and she’s at work on a third.] I hope we have lots of Jewish rom coms because there’s a huge gaping hole in the market there. And, you know, I think it’s really important that we start telling stories where we get a happy ending. I know it’s not what we do, but everyone deserves a happy ending, including Jews.