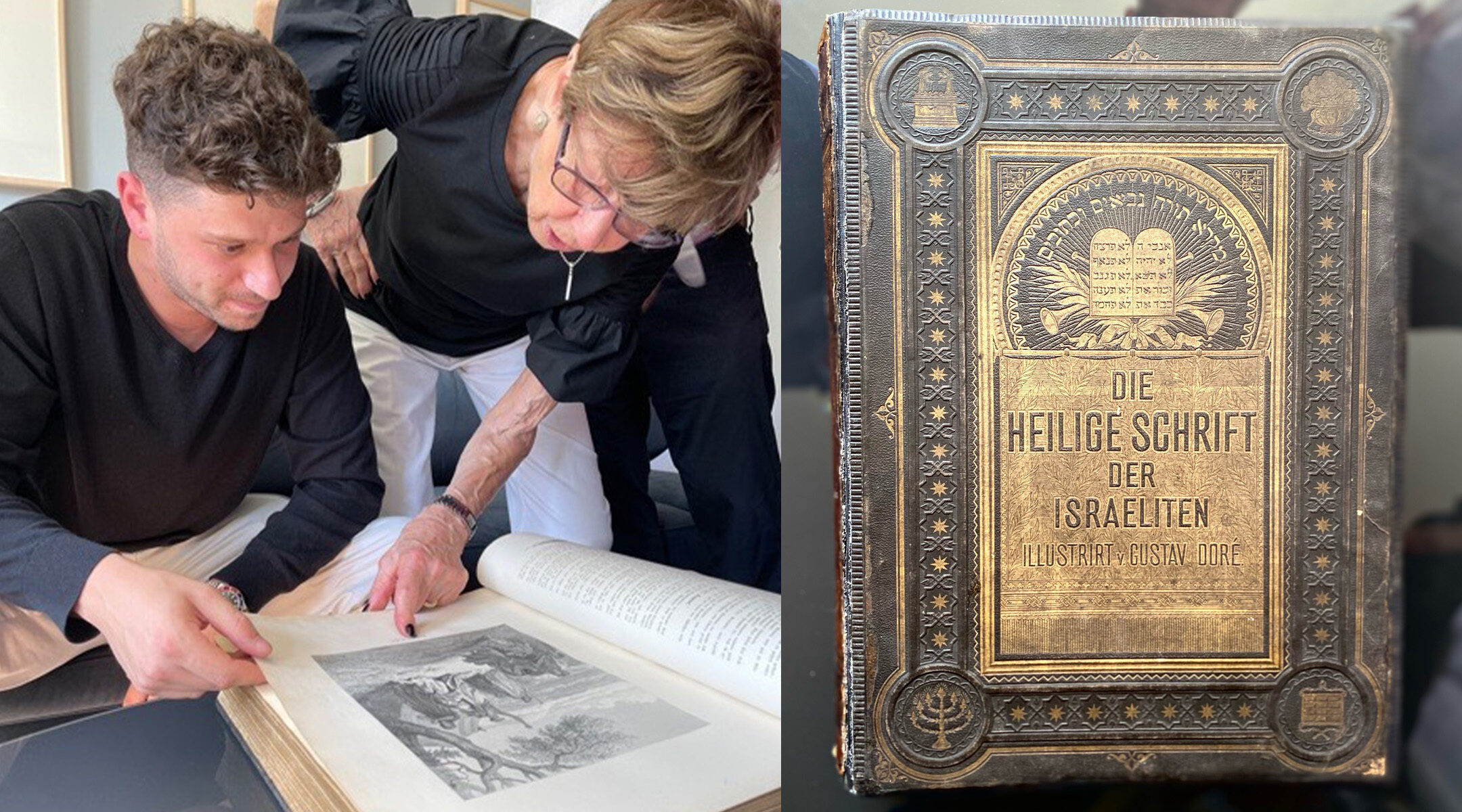 Jacob Leiter and his grandmother, Susi Kasper Leiter, examine an heirloom Bible that had been hidden by family members during the Holocaust, June 9, 2021. (USHMM)
Advertisement

(New York Jewish Week via JTA) — Some families spend years, if not lifetimes, tracking down family heirlooms and treasures hidden from or seized by the Nazis during the Holocaust.

And some, like Susi Kasper Leiter and her grandson Jacob Leiter, get an unexpected message from the United States Holocaust Memorial Museum saying a piece of their family past had been rediscovered.

In June, a courier dispatched by a German museum arrived at Susi’s Upper West Side apartment with a package. Surrounded by their immediate family and rabbi, she and Jacob withdrew an 1874 family Bible featuring illustrations by the famed French artist Gustave Doré. The delivery marked the latest turn in the remarkable journey of the Bible and a bittersweet coda to a tragic chapter in the Leiter family’s story.

Hidden by Eduard and Ernestine Leiter, Jacob’s great-great-grandparents, before they were deported to Treblinka, the “Heilige Schrift der Israeliten,” as it is known in German,  had passed through multiple hands before arriving, improbably, in New York.

“Twenty-eight members of my own family tragically did not survive the Holocaust,” said Susi, 94. “So when we were notified about the finding and survival of this Bible, I realized that miracles can happen. It is a new connection for my children and grandchildren, to the Leiter family whose name they bear.”

It was a connection that might never have been made if not for a series of accidents. According to the USHMM, Eduard and Ernestine Leiter left the Bible and other valuables behind a double wall in a house in the German town of Bopfingen-Oberdorf, where they were forced to live by the Nazis along with seven other Jewish families. They were deported to Theresienstadt and eventually murdered at Treblinka in what the museum presumes was October 1942.

“They must have thought to hide their precious few possessions hoping they would return for them, but they never came back,” said Jo-Ellyn Decker, research and reference librarian for the museum’s Holocaust Survivor and Victims Resource Center.

The house in Oberdorf changed hands after the war, and it wasn’t until 1990 that one of the owners’ sons found the hidden cache. In 2017, the man sold the Bible on eBay to Gerhard Roese, an artist from Darmstadt who collected works by Doré.

According to Jacob Leiter, “Roese immediately realized that this Bible was a piece of history and that it was hidden in ‘consequence of force.’” Roese decided to turn its reemergence into an art project, photographing local residents flipping through the Bible as a comment on a post-Nazi Germany. That’s when a student being photographed discovered inside the book a postcard made out to Eduard Leiter from the book’s publisher.

After a few years of unsuccessful attempts to find any living relatives, said Jacob, Roese donated the Bible to the Ehemalige Synagogue and Museum in Oberdorf. They eventually reached out to the USHMM to see if there was any way to track down anyone in the U.S. who might be related.

In February, Jacob was contacted via LinkedIn by a researcher at the museum. She asked if he were related to Charles and Max Leiter, who turned out to be his great-grandfather and grandfather.

The 22-pound Bible was delivered to the family on June 9.

“It was an amazing moment in my family’s history,” Jacob, who lives in Roslyn, New York, told The Jewish Week. “My initial impression upon seeing the Bible was one of awe at the grandiose size of the Bible. After that, I had feelings of gratitude and fulfillment. There was a lot of back and forth that took place over the course of about five to six months, and I was ecstatic to see it all come to fruition.”

Leiter also cherished sharing the experience with his grandmother, who survived the Holocaust as a child refugee to the United States. Susi told her story for the USHMM’s collection of survivor testimonies, and has identified herself in archival video footage as one of the refugee children aboard  the SS Mouzinho, a ship that left Portugal for the United States in 1941. Susi’s late husband Max Leiter, who died in 2008, was the grandson of Eduard and Ernestine Leiter, whose son Charles (Sali) survived the war. Susi and Max had two children and three grandchildren, including Jacob.

“I am overwhelmed with emotions and memories, and at the same time so grateful to witness this,” said Susi. “There are no words to describe the goodness, patience and caring of the wonderful people involved in Germany to make sure that the Bible was returned to its rightful owners.”

Copies of the Bible are sold by antiquarian booksellers for around $500, but the Leiters consider theirs priceless. Jacob said the family intends to hold onto the Doré Bible as a family heirloom, and “somewhere down the line” donate it to the USHMM.

“To have the Bible back in our family’s possession is an amazing feeling. The more that I learned about the journey of this Bible, the more passionate I felt about bringing this home,” said Jacob.