At least 9 former Nazis died in the US while awaiting deportation. 3 House Democrats want to know why. 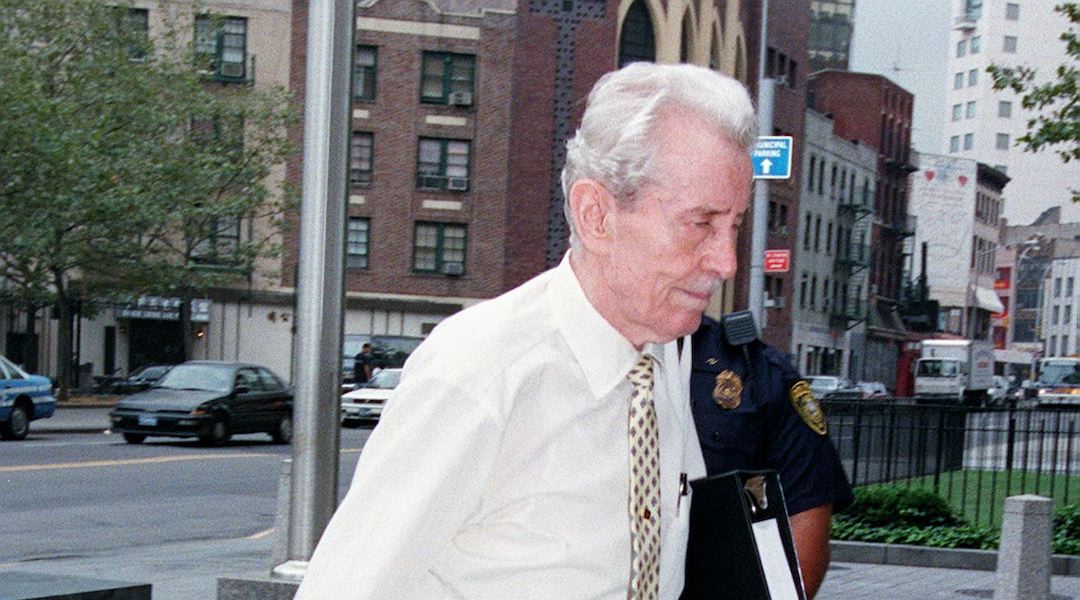 Jack Reimer, a Ukrainian immigrant accused of being a Nazi war criminal, enters Federal District Court in Manhattan on Aug. 17, 1998. He was later stripped of his U.S. citizenship and ordered deported, but died at his home in Fort Lee, New Jersey. (Stan Honda/AFP via Getty Images)
Advertisement

(New York Jewish Week via JTA) — In 1992, the Justice Department’s Office of Special Investigations learned that before moving to the United States, a Brooklyn potato chip salesman had participated in the liquidation of Jewish ghettos in Poland, including those in Warsaw, Lublin and Czestochowa. And there was evidence that he helped other SS men execute 50 to 60 Jews in a ravine near Trawniki.

Jack Reimer was tried in 1998 and denaturalized, or stripped of his U.S. citizenship, in 2002. An appeals court upheld the decision in 2004, and the following year the U.S. sought to deport him. He agreed to leave for Germany but died in August 2005 before that could happen. He was living in Fort Lee, New Jersey, at the time and died surrounded by his family.

Sixteen years later, three New York House Democrats are asking the State Department to conduct a review of their records to learn why Reimer and eight other Nazi war criminals who were found living in the U.S. after the war were prosecuted, convicted and ordered deported but then allowed to die “comfortably in the United States.”

“Some of these men were stationed at Nazi concentration camps,” they wrote. “Others participated in the horrific liquidation of the Warsaw ghetto. The Department of Justice established beyond a reasonable doubt that each of them contributed to the atrocities of the Holocaust.…

“We recognize that other countries may simply have been unwilling to take custody of these criminals upon deportation from the U.S., but we welcome a clear picture of the diplomatic engagement around these cases that nevertheless failed to secure their deportation. It is important that the State Department provide the public with a complete accounting of that profound injustice.”

The letter, addressed to Secretary of State Antony Blinken, was signed by Judiciary Committee Chairman Jerrold Nadler, House Democratic Caucus Chair Hakeem Jeffries and Foreign Affairs Committee Chair Gregory Meeks. A spokesman for Nadler said the letter was prompted by an inquiry from a constituent.

The Nazi war criminals were all prosecuted by the Office of Special Investigations, which was established in 1979 at the urging of then-Rep. Elizabeth Holtzman, a Democrat from Brooklyn. Holtzman told the Jewish Week that she welcomed the new probe.

“I would like to see if there are records about Nazi war criminals that have not been released,” she said. “The U.S. government has a long history of protecting war criminals. … These files need to be made public, if they are not already, so that scholars can find out what the U.S. did and didn’t do.”

Asked about the refusal of other countries to take these war criminals, Holtzman said: “The real question is whether the U.S. government tried hard to get foreign governments to take them. … Bringing justice for Jews and others killed by the Nazis has not been a top priority. The problem has been publicized and known for a long time by those of us who have been fighting hard to bring them to justice.”

She cited the case of Karl Linnas, an Estonian who worked as a land surveyor while living quietly in Greenlawn, Long Island, for more than 30 years. He came to the U.S. in 1951 and became a naturalized citizen in 1959 by lying about his past — he claimed to be a person displaced by war —  and did not reveal that he had been sentenced to death in absentia by the Soviet Union for Nazi war crimes.

Linnas had been identified by witnesses as supervising the murder of 12,000 inmates – mostly Jewish women and children – at the Tartu concentration camp in Nazi-occupied Estonia, which was part of the Soviet Union. It was said that he personally ordered guards to fire on prisoners as they kneeled along the edge of a ditch, causing them to fall directly into their graves. Holtzman said Linnas “personally murdered Jews in a ditch.”

After his arrest in the U.S., a court stripped him of his citizenship in 1982 and ordered him deported. Russia was willing to take him but the Reagan administration did not want to send him there, at a time when the USSR was viewed as “the evil empire.” The U.S. wanted to send him to Panama “where he could sit on a beach under a palm tree and enjoy life after murdering Jews,” Holtzman said.

“So on either the first or second day of Passover, when they knew all the Jewish organizations were closed and there would be nobody around to stop them,” they planned to fly him to Panama, Holtzman recalled.

“But they forgot about me. I had gone to my office to pick up some papers when I got a call from Washington and was told that Linnas was going to be put aboard a plane to Panama. I had non-Jews working in my office and we called the Panamanian Embassy … and got an appointment with the Panamanian ambassador to the U.S. We flew to Washington at 2 o’clock in the afternoon and then got word that the U.S. government had decided not to take him [to Panama]. But this is what our government had been prepared to do, and we had foiled the Passover plot.”

In the end, Linnas was deported to Russia, but he became ill and died of heart failure at the age of 67 before he could face a firing squad.

In all, the OSI (which in 2011 merged into the new Human Rights and Special Prosecution Section) succeeded in prosecuting 109 former Nazis living in the U.S. and extradited, expelled or removed 69 of them (the rest died before they could be removed). The last case was that of Friedrich Karl Berger, 95, who had served as a concentration camp guard in Germany. He was deported to Germany in February.

Reimer’s case was heavily publicized at the time of his arrest and trial; the columnist George Will opined that “the unspeakable was done by the unremarkable, and it speaks well of American justice that it will not close the books on bestiality.”

Born in Ukraine, Reimer applied for a U.S. visa in 1952 and became a naturalized citizen in 1959 by concealing the fact that he had been part of a feared SS unit comprised of former Soviet prisoners of war. He was trained at a special camp at Trawniki, Poland, and was involved in the extermination of Jews throughout Poland.

Charges against Reimer were filed in 1992 and it took six years for his citizenship case to come to trial. Among the most damning evidence against him were a series of admissions he made in 1992 during five hours of interrogation by the OSI. In it, he acknowledged firing his rifle at a man in a group of Jewish civilians who had been assembled for execution in a mass grave near Trawniki in the winter of 1941-42.

“You finished him off?” he was asked.

He later claimed he had been coerced into making that statement and insisted he had “overslept” and thus was not present when 50 to 60 Jews were executed in the ravine at Trawniki.

Reimer, who had once owned a Wise potato chip franchise in Brooklyn, later worked for a Schrafft’s restaurant and then became its owner. He was tried in 1998 and denaturalized in 2002 by the Federal District Court in Manhattan. An appeals court upheld the decision in 2004, and the following year the U.S. sought to deport him.

In 2013, eight years after Reimer’s death in New Jersey, a Justice Department official recalled his case in a speech at the U.S. Holocaust Memorial Museum.

“We will never know the names of those who were massacred by Reimer and his men, but we know that they too did not live to see justice done,” said Eli Rosenbaum, director of Human Rights Enforcement Strategy and Policy for the Criminal Division’s Human Rights and Special Prosecutions Section.

But Holtzman insisted that these Nazis who died here did not live their final days in peace.

“They had court proceedings to attend, the record of their evil is indelible, and their family and neighbors know it forever,” she said. “They had the mark of Cain and the sword of Damocles over their heads. And they never knew whether these countries [that refused to accept them] might change their minds. They were disgraced and shamed. They didn’t rest easy because they never knew what might happen.”