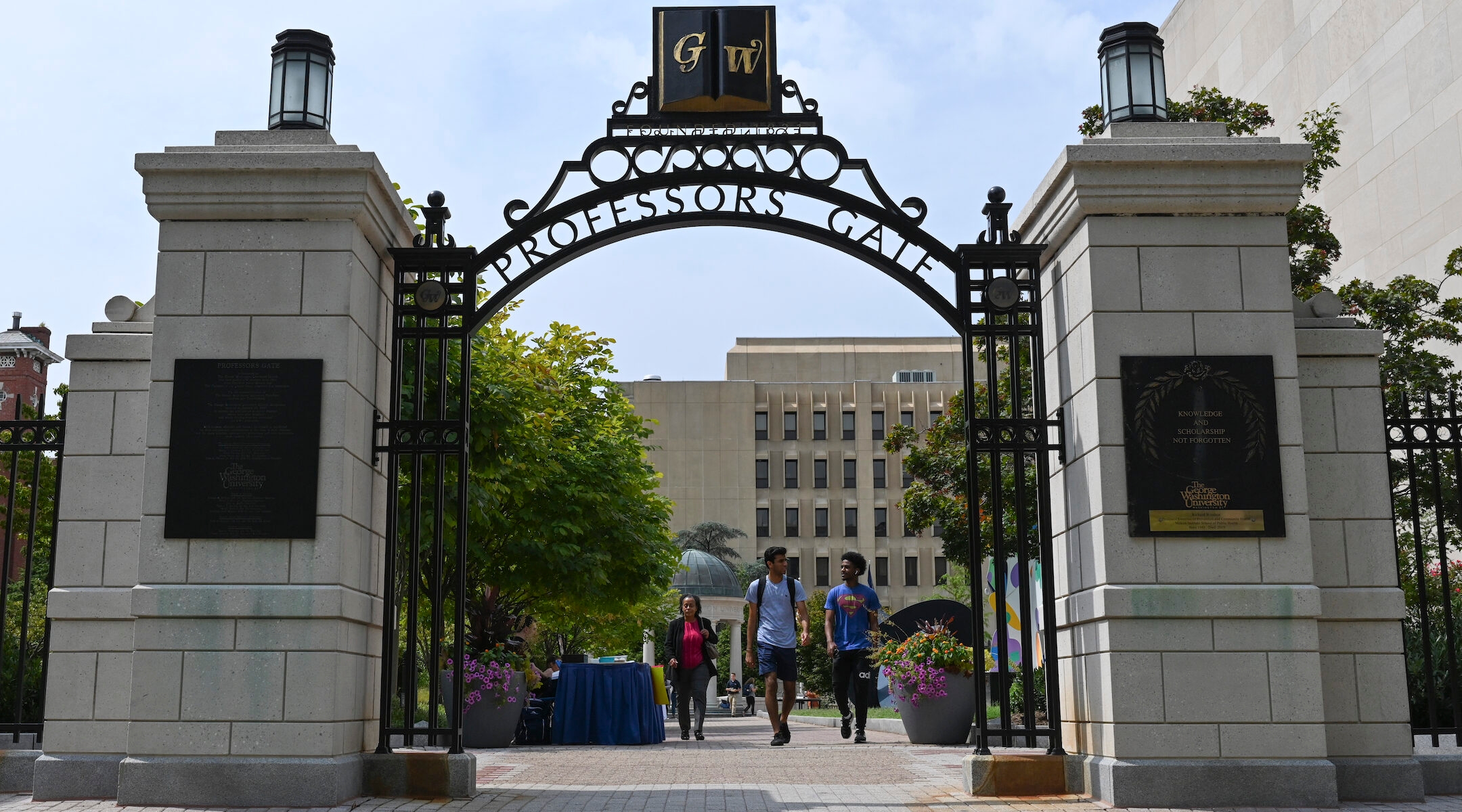 (JTA) — A rally is set to take place at George Washington University Monday after a fraternity on campus said a small replica Torah used in its initiation process was damaged during a vandalism spree.

The president of Tau Kappa Epsilon, a fraternity on George Washington’s campus, said the vandalism took place early Sunday morning, according to a report in the university’s student newspaper. He said hot sauce was poured throughout the house and many objects were thrown around, the newspaper reported.

“Our entire chapter is outraged and saddened by this blatant act of antisemitism and violence against our brothers,” the fraternity said in a statement Sunday afternoon.

A picture showing the damaged Torah circulated widely on social media Sunday, drawing condemnation from a wide array of Jewish advocates and influencers, some of whom connected the incident to what they said was a pattern of antisemitism on college campuses.

OUTRAGEOUS – a Jewish fraternity house (TKE) at George Wash. U. (@GWtweets) was broken into & vandalized last night as Shabbat was ending

The Torah was ripped apart & had detergent poured all over it

“The Jewish frat house at George Washington University was broken into and its Torah was destroyed. They ripped the scrolls apart and threw detergent on it,” wrote Hen Mazzig, an influencer who was one of the first to post the picture online, in a tweet that was shared more than 5,000 times by early Monday morning. “This isn’t Nazi Germany in 1938. It’s American college campuses in 2021.”

George Washington University President Thomas LeBlanc condemned the incident in a statement to the student newspaper, calling it an act of antisemitism. University police and the police department of Washington, D.C., where the school is located, are jointly investigating, he said.

The report comes just days after Hillel International and the Anti-Defamation League released the results of their first-ever joint survey about antisemitism on college campuses. The survey found that a third of American college students said they had experienced antisemitism in some form over the last year. The ADL’s D.C. chapter tweeted that it had spoken with students and police and “expected a full & rapid investigation.”

As news of the incident spread rapidly online, several inaccuracies spread as well. Among the many accounts stating that the vandalism took place at a Jewish fraternity were Yeshiva World News, an Orthodox news service, and the American Jewish Committee, which last week released an antisemitism report of its own. Tau Kappa Epsilon is not in fact a Jewish fraternity, although a significant minority of its members are.

StopAntisemitism, another social media watchdog that was one of the first prominent accounts to share the picture, said the vandalism took place “as Shabbat was ending.” According to the fraternity, the damage took place at least six hours after the end of Shabbat.

One of the Jewish organizations serving the campus is organizing a “Torah procession and solidarity rally” with Tau Kappa Epsilon set to take place Monday afternoon. The announcement on Instagram shows a number of participating groups including the campus Hillel, which said that it would host a discussion space at its building during the hour before the rally for students to talk about the incident.

“When hatred rears its ugly head, we must come together as a powerful force of love and unity,” the post announcing the rally said. “We call upon students and faculty of every persuasion and ethnicity to stand in solidarity with TKE students and the wider Jewish community.”

Rabbi Levi Shemtov, who directs Chabad GW and is the senior representative of Chabad  in Washington, D.C., visited the fraternity on Sunday, according to the student newspaper.

“I feel that something like this deserves a lot more than routine attention,” Shemtov, who hosted an event focused on campus antisemitism last week, told the newspaper. “Especially as it comes in the face of last week’s event where the president of the university himself stood on a stage and said he wouldn’t tolerate any antisemitism on this campus.”