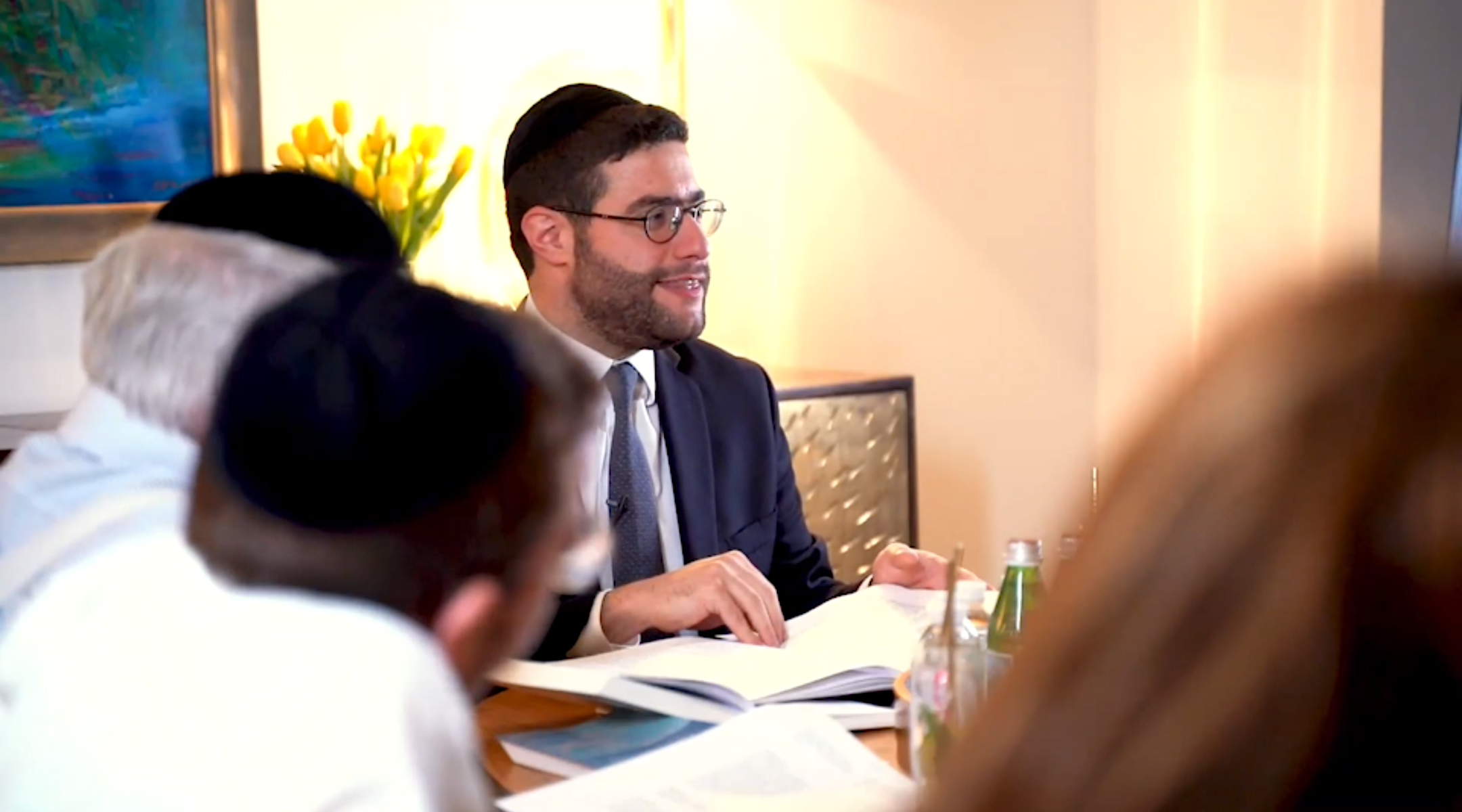 Rabbi Benjamin Goldschmidt (center) teaches a class earlier this year leading up to the High Holidays. (Screenshot from LinkedIn)
Advertisement

(New York Jewish Week via JTA) —The rift at Park East Synagogue may widen, as Rabbi Benjamin Goldschmidt, who was fired as assistant rabbi last month, has started his own Shabbat service three blocks away from his former synagogue.

This will be at least the second service hosted by Goldschmidt since he was fired from the wealthy Orthodox congregation on Manhattan’s Upper East Side on Oct. 15. Last week, according to multiple sources, he hosted Shabbat services in his apartment with dozens of attendees.

Since his firing, he and Rabbi Arthur Schneier, who fired him, have both sought to tell the congregation their side of the story through emails to the membership list. Schneier and his supporters have accused Goldschmidt of inappropriately sharing members’ email addresses and trying to lead a “coup” at the synagogue.

In an Oct. 29. email to members, Goldschmidt denied those allegations. He called them “completely unfounded, and personally hurtful,” and wrote that he and his supporters were trying to address concerns about the synagogue’s growth. He asked members to “remain engaged with the shul to ensure it is a place that is warm and welcoming.”

Now, it appears he has moved on, and is inviting former congregants to join him. He and his wife, the journalist Avital Chizhik-Goldschmidt, recently sent an invitation to a list that included some Park East members, inviting them to a Saturday morning service with lunch to follow at an elite event space just blocks from Park East. A spokesman for the Goldschmidts asked JTA not to name the venue, citing security concerns.

The Jewish Telegraphic Agency has learned that so far, approximately 80 people have RSVPed that they will be going and that the event space was booked sometime in the past week.

“We are embarking on a new journey,” the invitation states, before naming the weekly Torah portion. “Join us for Shabbat Parshat Toldot. We look forward to seeing you!”

A member of the Park East leadership told JTA that the synagogue draws about 150 people on a regular Shabbat morning. Goldschmidt’s service is also being organized on a particularly eventful Shabbat at his former synagogue. On Friday night, Park East is hosting the French Jewish philosopher Bernard-Henri Levy. On Saturday morning, the synagogue is hosting a commemoration of the Nazi Kristallnacht pogrom, with the consul general of Austria. Schneier is a Holocaust survivor.

Goldschmidt’s attorney, Daniel Kurtz, told JTA that Goldschmidt was organizing the service because he intended to continue his work in the community he’s called home for 10 years.

He said that Goldschmidt’s plans are going to be “week to week.” Regarding the proximity to Park East, he said, “This is not a horse race. Nobody is under compulsion to come.”

“This is where he lives and where he’s a rabbi,” Kurtz said. “This is his natural constituency. He’s not going to move to Greenwich, Connecticut, and start inviting people.”

Hank Sheinkopf, a political consultant who is acting as a spokesperson for Schneier, told JTA that he feels Goldschmidt is trying to “undermine Rabbi Schneier and undermine the community [for] his own self interest.”

Over the past few weeks, both Schneier and Goldschmidt have hired lawyers and threatened litigation over their dispute. It is unclear whether any legal action is forthcoming. But multiple members told JTA that the service Goldschmidt is organizing means that the feud is not yet over.

“I think what it means for Park East is that this is still lingering in the community,” said Jonathan Medows, a member of Park East who attends services there regularly and is himself a rabbi. “It’s an open wound, and this is the time for Park East to enter the post-Rabbi Goldschmidt phase.”