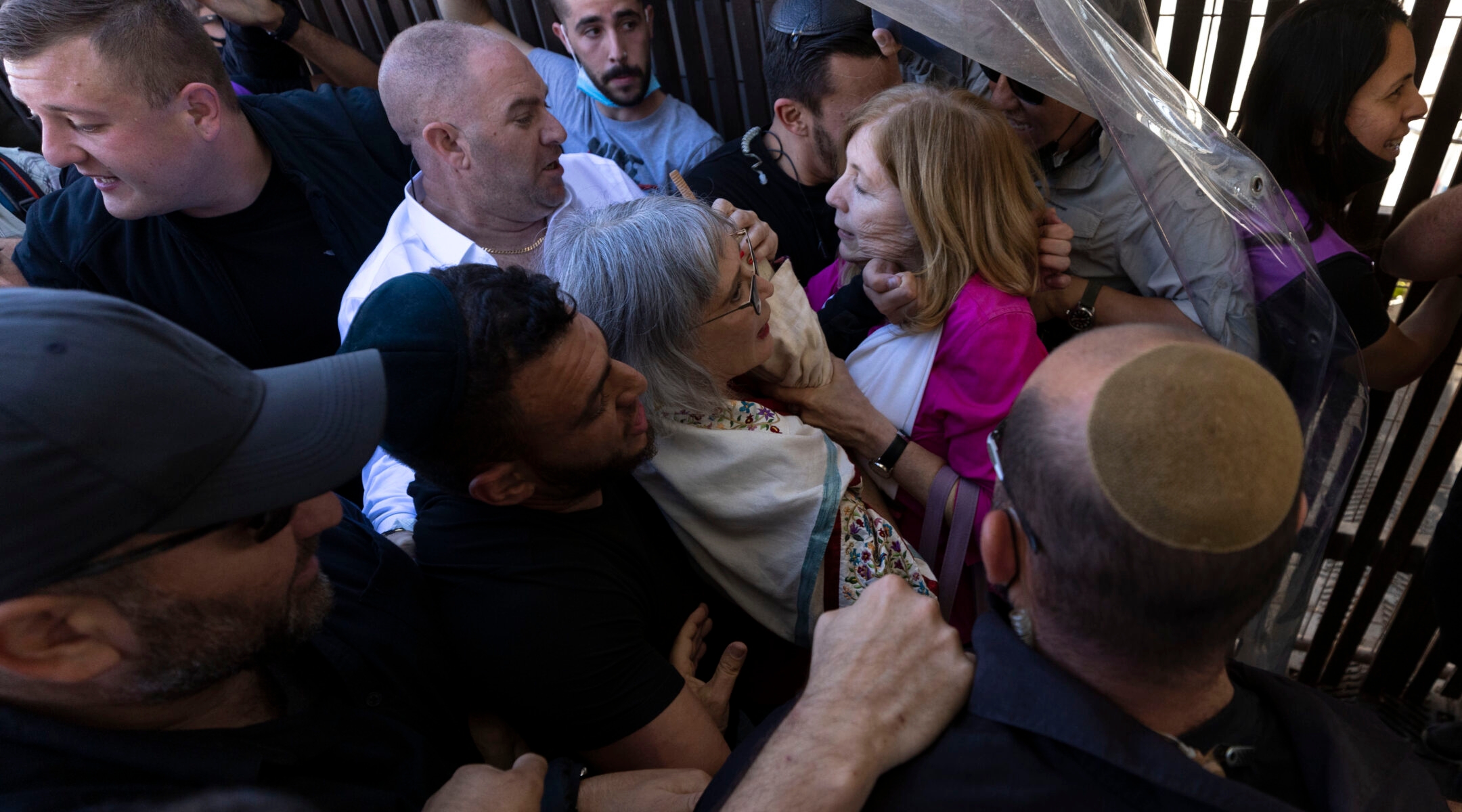 Security guards confront members of the Women of the Wall movement during Rosh Hodesh prayers at the Western Wall in Jerusalem, Nov. 5, 2021. (Olivier Fitoussi/Flash90)
Advertisement

(JTA) — Women of the Wall’s monthly prayer service at the Western Wall in Jerusalem was disrupted yet again by more than 100 Orthodox protesters, a day after former Prime Minister Benjamin Netanyahu amplified the protesters’ cause.

The disruptions took place even though lawmakers who support and oppose the group agreed to stay away from the Western Wall, in a bid to calm tensions.

Women of the Wall, a group that organizes a women’s prayer service at the holy site on the first day of each Hebrew month, has long faced opposition from Orthodox Jews who seek to prevent the service. For years, the Orthodox protesters have regularly heckled and at times physically attacked the group and tried to stop them from bringing in religious items, including Torahs.

An agreement signed in 2016 aimed to end the clashes by creating a prayer space for non-Orthodox groups at the site. But Netanyahu, then the prime minister, suspended the agreement the following year. Israel’s new government is seen as likely to implement the deal, which one activist described as “low-hanging fruit” for the government. So far, however, no action has been taken.

In 2017, even as he suspended the deal under pressure from his haredi, or ultra-Orthodox, allies, Netanyahu claimed to support a compromise solution at the holy site.

But he was ousted as prime minister earlier this year, and needs the support of Israel’s haredi parties to return to power. This week, he retweeted a message from Aryeh Deri, the leader of the haredi Shas party, calling on “everyone for whom the sanctity of the Western Wall is important to come and pray with us, so that, God forbid, the holy place will not be desecrated.”

Ahead of Friday’s service, after the organization in charge of the Western Wall said that it could not guarantee the site’s safety, Israeli President Isaac Herzog asked members of the Knesset who planned to join the demonstrations on both sides to stay home. All but one of the Orthodox members who had said they would join the protest stayed away. So did Gilad Kariv, the first Reform rabbi to hold a seat in Knesset, who wrote on Twitter, “Once again it was made clear which is the side that believes in compromise and negotiability and which is the forceful and violent side.”

On Friday morning, Women of the Wall waited for an extended period at the security checkpoint to enter the Kotel Plaza while guards inspected the religious paraphernalia they sought to bring inside. Once inside, the group held a service at the site.

“We smuggled in a Torah scroll but were of course not allowed to bring it into the women’s section,” the group wrote on Facebook. “Security surrounded them in attempts to take the scroll. A mob surrounded the group and eventually physically pushed them out from the plaza. We were unable to read from the Torah this morning.”