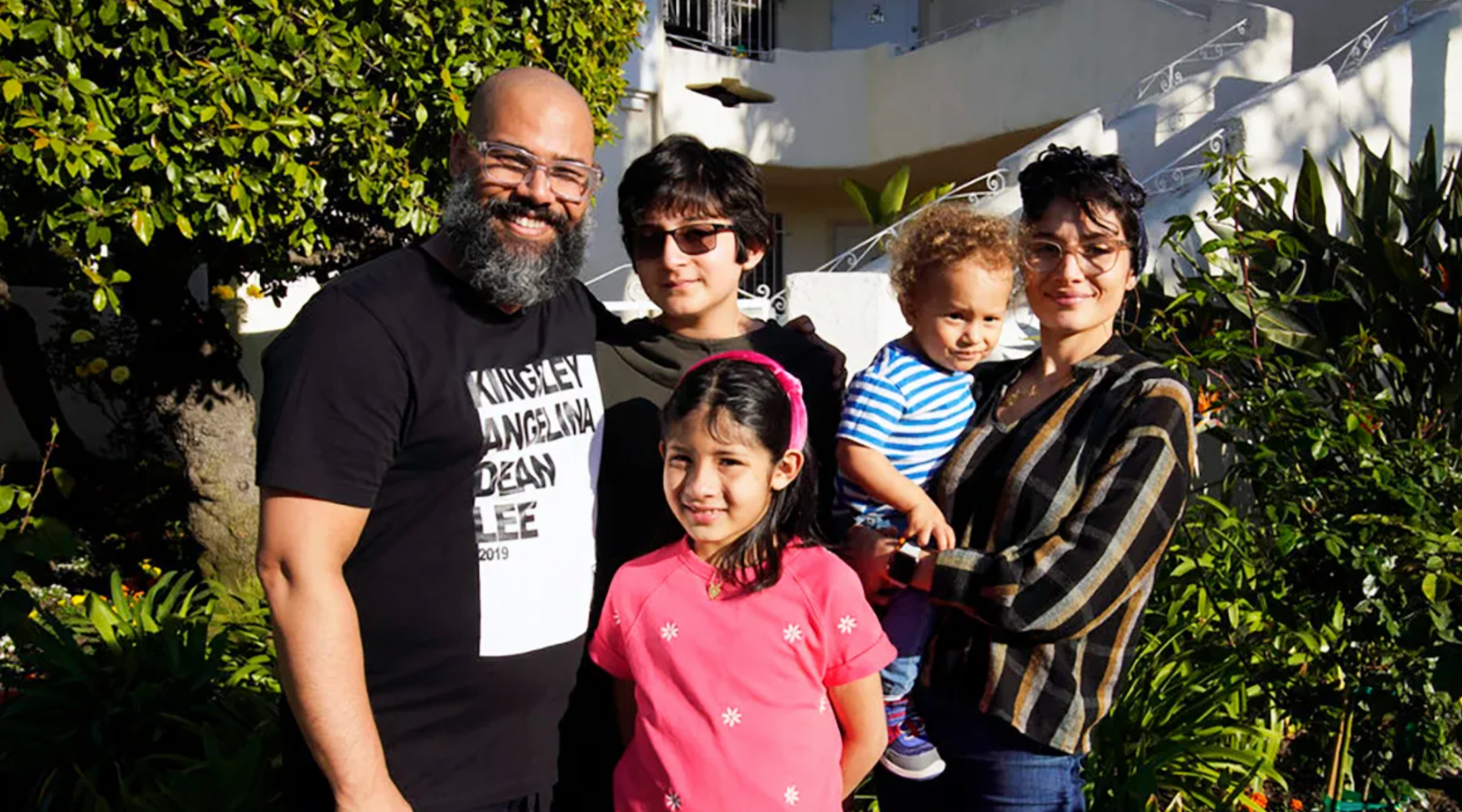 The Silversteins, from left: Joshua, Ami, Laila, Shel and Cinthya, outside of their Los Angeles home. (Casey Durkin/NBC)
Advertisement

(J. the Jewish News of Northern California via JTA) — For their first episode including a Jewish family, the casting directors of “Home Sweet Home,” a new life-swapping show, tapped a multiracial family whose youngest child shares a name with the iconic children’s poet Shel Silverstein.

The Silversteins — Joshua (40), who is Black; Cinthya (37), who is Mexican American; and their three children, Ami (13), Laila (9) and Shel (2) — may well have been the first multiracial Jewish family to make a primetime appearance on American network television.

During each episode of “Home Sweet Home,” which was created and executive produced by “Selma” director Ava DuVernay, two families from very different backgrounds swap lives for a week. They move into the other family’s house, prepare their typical meals, meet their friends and participate in their activities. The goal is to expose the families (and viewers on NBC and Hulu) to other lifestyles and foster greater empathy for one’s neighbors.

In the third episode, which was shot in May and aired Oct. 29, the Silversteins leave their art-filled Los Angeles duplex and check into the large and very white Orange County abode of the Baltzers, who are members of the Church of Jesus Christ of Latter-day Saints, or Mormons. A framed image of Jesus greets them when they arrive.

Paterfamilias Joshua Silverstein — an actor, comedian and beatboxer who in 2019 performed in the Bay Area run of “True Colors,” an ensemble show about the experiences of Jews of color — spoke with J. The Jewish News of Northern California about “Home Sweet Home” and the importance of representation for a family like his.

The phone interview was interrupted several times by an attention-hungry Shel. (“My wife and I are fans of the books, and growing up I would lie to my peers and tell them Shel Silverstein was my dad or my uncle,” Joshua said, explaining the name choice.)

This conversation has been edited lightly for clarity.

J.: How did you and your family come to be on “Home Sweet Home”?

Joshua Silverstein: I think the casting people found us through word of mouth and by going to our Instagram page. My wife and I had been doing a pretty provocative Instagram show when the pandemic first started. We had turned our garage space into a theater, and when everything got locked down, we were like, well, we should just do stuff in the theater.

So we started doing a daily news update show that kind of morphed into this commentary about societal issues. We were talking about race and culture and classism and gender deconstruction and religion. All these different conversations that you’re not supposed to have in public, we were having them on our show, every single day. We did 100 episodes, and the show became a podcast called “Silversteins’ Show.” So the producers saw the videos, saw a lot of what we represent and stand for in our family, and thought we’d be perfect guinea pigs for this experiment.

In the episode, you swap houses with a family of Latter-day Saints (more commonly known as Mormons) in Huntington Beach, and you meet some of their friends, who are also members of the LDS church. How much did you and Cinthya know about the church before you did the home swap, and what did you learn during the shoot?

We both were familiar with the faith to some degree. We knew the history of it being discriminatory against people of color and the queer community. [Editor’s note: Black people could not hold leadership positions in the church until 1978, interracial marriage was officially considered sinful until 2013 and same-sex marriage is forbidden.] There are things with any faith that we need to acknowledge and look at and deconstruct and move forward from.

We were actually excited to have conversations with people in that community. Those are the kinds of conversations we embrace, ones with people who are of an experience that we are not of. And what we found was that there was the awareness that things need to change, and that they are changing. In various circles of the LDS community, there are people who are looking to shift in a direction that is more inclusive.

The episode presents the Baltzers as very devout believers in God, in contrast to your family, where the existence of God is open for debate. In one scene you struggle a bit to bless the food before a meal, per the Baltzer family’s house rules. How did that tension play out during the course of your experience?

Although we’re Jewish — my kids are Jewish, my wife and I are Jewish — even in our own family, that doesn’t have the same meaning. I am agnostic, my wife is agnostic, but my kids believe in God. My son loves reciting the prayers. We are not a family who is against God. We are a family where God plays different roles within the structure of our home. I think for the production, that was an interesting thing.

One of the big questions we faced while living in the Baltzers’ home was, how do we engage in a home where God is such a big part of their lives? How do we embrace that respectfully? Even though I may not agree with someone, or I may feel like someone’s practice isn’t the best practice, how do I walk in that person’s shoes without criticizing it in a way that devalues it? That’s the larger challenge that we as humans have.

This is likely the first time that a family of Black and Mexican American Jews has appeared on a network television show. Have you thought about the significance of that?

We’re very aware of that. It’s really exciting. My hope is that people see the show and go, “Wow, they are an example of what the world should look like. We should be able to coexist like this, you know, being multiple faiths, multiple ethnicities, multiple cultures.”

I’m also hoping that, as part of our journey, maybe we can find a path to a synagogue that is more embracing of our family. It’s been hard. We walk into a space and we have to explain our Judaism. We’re forced to have those conversations about Cinthya being a convert, and my dad being Jewish and my mom not converting. Ami really wants to have a bar mitzvah. Laila wants to have a bat mitzvah, too.

At one point, you’re talking to Cinthya about your sense of humor, and you say, “Listen, when you’re Black and Jewish, and everything hurts, laughter is the best medicine.” Can you expand on that?

I grew up suffering. Not because life in Los Angeles was particularly hard, but because I didn’t feel equal to my peers, and I didn’t feel heard at home. And on top of that, being Black and getting harassed by police officers as I’m trying to get to school on time, and feeling like my Judaism is not seen in Jewish spaces because my blackness is the only thing that’s being seen. So you know, growing up with all this stuff around me, there’s pain. And I found the way to move through it was to mock it.

When we met the Baltzers [at the end of the episode], I was making lots of jokes, disarming that awkward tension of like, “Hey, I don’t know you, but I lived in your house for a week!” When you’re laughing, you’re letting your guard down. And when everyone’s laughing together, there’s a certain humanity that’s agreed upon. I think laughter allows us to see each other as equals.

What do you think the Baltzers got out of the experience of walking in your shoes by, for example, participating in an improv acting class and recording a mock podcast on race with your mother, Beverly?

We were not ever really out of our element, whereas they completely were every step of the way. Based on the ways they spoke to us off-screen, it was clear they really had an experience where they did some thinking.

What you could also see at the end of the episode is just them being grateful they’re done. It was stressful for them, whereas for us, it was like, hey, this is exciting to have conversations with people that we don’t get a chance to talk to on a regular basis.

Tell me about the racial justice T-shirts you’re wearing in the episode.

They’re part of my Not Fair Wear line, which is a line of shirts that comment on issues that specifically affect people of color. They’re really about creating dialogue around things in pop culture that we may not be talking about. Remember, I’m a nerd.

The first shirt you see me in is one that says, “Malcolm X lost to blind Al Pacino.” That is a reference to Denzel Washington losing the best actor Oscar to Al Pacino [in 1993]. There’s another shirt that has the names of all the Black characters that appear in “Harry Potter.” There’s just four.

We were the first episode shot, and we got to see a lot of Ava in the beginning. She doesn’t come off like an apathetic TV exec. You can tell she was very enthusiastic about what this show is. It’s kind of like a baby to her. After our episode was in the can, she wanted to know what we thought about it. There was a lot of respect in that regard.

What did you hope to achieve by appearing on “Home Sweet Home”?

As parents, we’re always about giving our kids experiences that will enhance who they are as human beings. We thought we would be terrible parents to pass this up.

Also, Cinthya and I being who we are, being activists, being interested in dialogues that are about examining social constructs and deconstructing oppressive, toxic mentalities that we as a society have adopted — I think walking into a space where we were going to have to deal with people that we may not ever get to speak to, that was very interesting and enticing.

I think as long as Cinthya and I stay committed to embracing every opportunity we can to have tough conversations, then there’ll be more opportunities for this kind of thing to continue. And who knows, maybe this leads us to another platform where there’s space to have even more conversations.

What kind of feedback have you received since the episode aired?

A lot of the stuff that I’ve seen on Twitter with regards to our episode was, “wait, Jews don’t have to believe in God?”

A second episode of “Home Sweet Home” featuring a Jewish family will air on Nov. 19. In that episode, the Segal family will trade lives with a Sikh Punjabi family.

A version of this story was originally published in J. The Jewish News of Northern California. It has been republished with permission.