(New York Jewish Week via JTA) — The ceiling is pink. The store is long. An abstract, tiled face of a woman watches from above a narrow wishing well. There are bright pink, turquoise and yellow tiles embedded in the walls.

On display are handbags and clutches shaped like oversized red bows, slices of fruit, blue skies and Hello Kitty. A cluster of bags in the shape of wine glasses hangs by the entrance. All are constructed out of large, colorful, carefully stacked beads, and each is handmade. There are beaded wallets, headbands, earrings, vases. Even the chandelier is beaded.

The first physical store for the Susan Alexandra brand opened to the public on Oct. 29 at 33 Orchard Street, where it gleams, in all its beaded glory, on New York City’s Lower East Side.

It’s a big moment for Susan Korn, the designer and visionary behind the brand, who moved to New York City in 2008 and worked for various boutiques before focusing more exclusively on creating her own pieces in 2011. In 2017, a serendipitous encounter with manufacturer Lisa Deng — who still works for the brand — led to the creation of her watermelon handbag, which proved an instant hit on social media.

The brand then began to grow quickly; in the past few years Susan Alexandra has become widely beloved among designers, celebrities and fans all over the world. The opening has been effusively celebrated by fashion magazines like Vogue, Nylon, and The Cut, as well as scores of designers and influencers.

Korn scouted the area for months before signing a lease in April 2021. “It had to be Orchard Street,” she said, describing the various spaces in various states of disrepair she had considered before finally settling on this location, which she began renovating this past August. “For me, that’s just the street.”

What that usually means is that Orchard Street — and the Lower East Side, in general — has been home for decades to independent designers, chic boutiques and impossibly cool people roaming the area in oversized blazers and fashionable corduroys, baseball caps and dad sneakers. The rents tend to be just enough this side of reasonable to allow independent spaces to hold on, and there is a sense of community among the many shops, galleries, designers, bars and restaurants operating in one small area.

But Korn is also proud to be back where Jewish textile businesses defined the area at the turn of the 20th century, when as many as 500,000 mostly Ashkenazi Jews lived in the neighborhood. 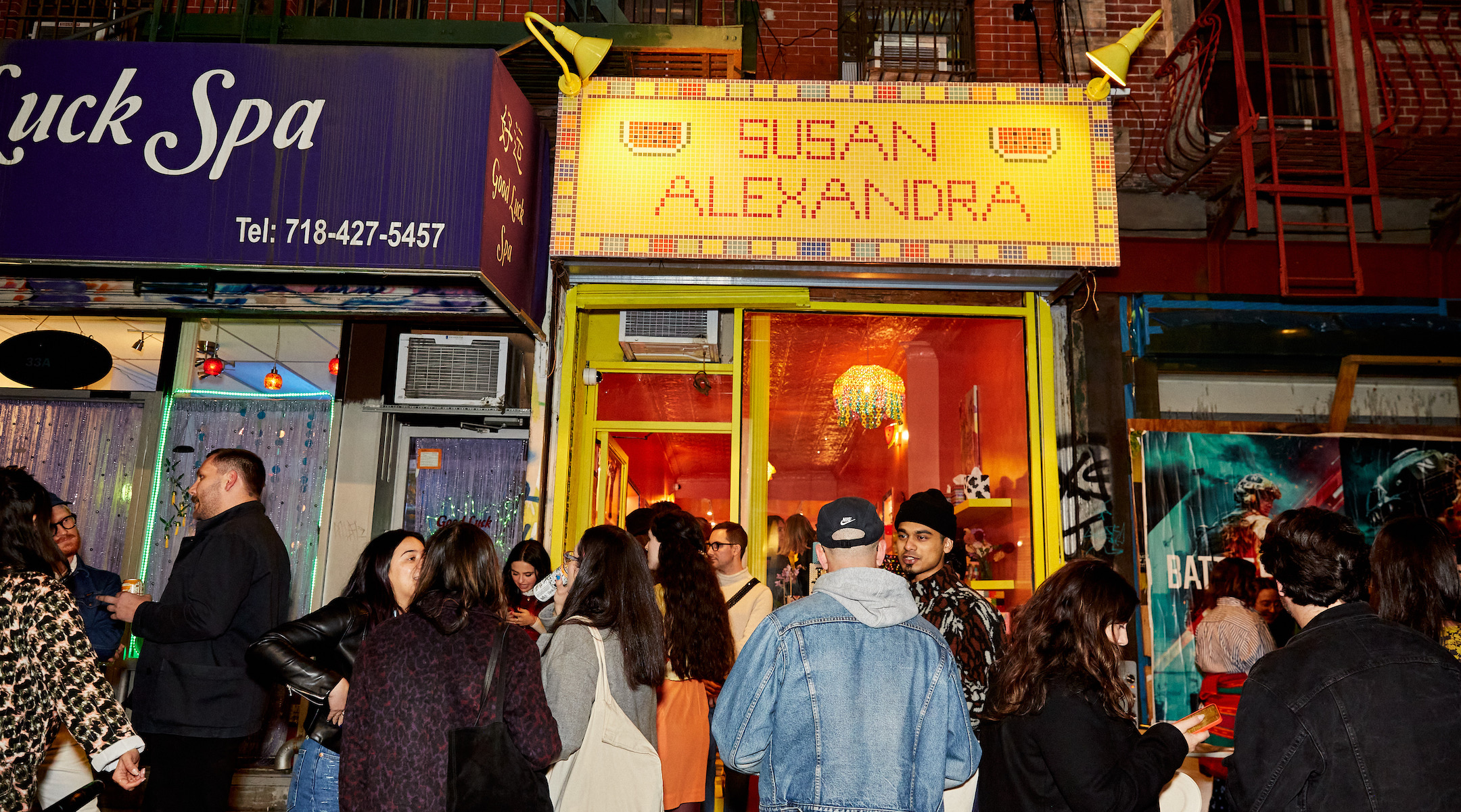 The new Susan Alexandra store on New York’s Orchard Street pays homage to the garment trade that was centered in the neighborhood at the turn of the 20th century. (Courtesy Susan Alexandra)

For years, the Susan Alexandra brand has also been known for its celebration of Jewish culture. In 2019, Korn hosted a daytime celebration at Baz Bagels in Soho, where her designs were presented as comedians served bagels and lox and riffed on Jewish culture. A few months later, she hosted a bat mitzvah fashion show for New York Fashion Week. Her Jewish identity is threaded through both her public persona and personal sense of self, and she wears it with an easy sense of pride.

Like many American Jews, Korn grew up with a deep sense of the Jewish history of the Lower East Side, from watching Barbara Streisand in “Funny Girl” to learning about the shmatte business, or garment industry, that centered around homes and sweatshops in the the area before moving to the Garment District, north of 34th Street.

“My mom would take me down to Orchard Street, and I remember her telling us how there used to be barrels of pickles on the street, and this was where the Jews lived,” she said, recalling childhood trips to New York from her hometown in Columbus, Ohio. “I just immediately fell in love with the neighborhood. It is so meaningful to me that Orchard Street is where I am putting down roots, in this place where so many people before me put down roots.”

Those roots go deep. According to the 1905 census, over 65% of Jews living in America worked in the garment industry. In 1900, inspection reports show that there were 23 home garment factories on one block of Orchard Street alone, most of them likely run by Jewish immigrants who worked from home in order to be able to keep Shabbat. This history is still present in the area: Around the corner from the new store, at 72 Hester Street, is Mendel Goldberg Fabrics, established in 1890. Down the block is the Tenement Museum, which preserves the apartments where Jewish families and others produced “piece work” for manufacturers and department stores.

While it’s hard to know what 33 Orchard Street would have been in the 1920s, historical photographs from 1940 reveal that, for a stretch of time, it was Mr. Katz’s Suspender Shop. Lingerie shops dotted the street in the 1930s, alongside leather goods and tailor shops. In the mid-1800s it was a music hall. Before Korn, the most recent business was a tattoo parlor.

And while the colorful bags going for over $300 a pop might not seem continuous with the crowded apartments and desperate circumstances many associate with the historic Lower East Side, it is not hard to imagine the styles being a hit with the teenage immigrant women who defined its streets over a hundred years ago.

After all, the 1890s was the height of the mauve craze, when the newly discovered dye made pink clothing accessible in a way it hadn’t been. Teenage immigrant women who spent their days sewing and stitching the latest fashions were often the ones most intimately aware of the changing trends. For example, one of the sticking points in ongoing labor protests of the time was young women wanted a place in the factories to hang their hats, so that these hard-bought fashion accessories would not get rumpled during their work shifts. Fashion mattered to these women, and the fashion of the time was influenced by Art Deco and newly flashy colors and styles. How very Susan Alexandra.

Of course, the history of the garment trade on the Lower East Side was also one of exploitation and labor unrest. In a Forbes article in 2019, Korn said she has steered manufacturing in ways beneficial both for the workers and the company. The bags are made locally in New York by immigrant women from China and Bangladesh, who are able to work from home and make their own hours.

For Korn, the Jewish history of the area is a meaningful reminder resilience in the face of hard circumstances. It is a message she had to keep in mind as she worked to open her first shop in the middle of a pandemic, rife with production shortages and uncertain health regulations.

“I’ve never done anything like this before,” she said, adding that opening a physical store during the heart of the pandemic felt like a leap of faith. “But I had this feeling that if it wasn’t now it would be never.”

The leap of faith seems to have paid off. Overall, business increased in 2020, and Korn didn’t have to lay off any workers during the pandemic. The bright aesthetic actually seems to be more in demand than ever.

On a recent afternoon, the shop was full of trendy shoppers browsing and admiring the pieces. Many already had their own Susan Alexandra bags or jewelry. Several wore the Susan Alexandra Jewish star necklace. One woman wondered out loud if the beaded earrings would get caught in her thick, curly hair.

I visited with my sister, who has worn a uniform of black and white for years, and even she was instantly drawn to the hard, plastic-beaded bags, which actually look far more elegant than their kitschy description might suggest. By the time we left, she had bought one.

The outpouring of affection from her friends and colleagues has only added to the whirlwind journey for Korn.

“Its just such an overwhelming feeling, to feel this love and support,” she said of the reactions to her store opening. “I worked in retail for many, many years when I got to New York, and I still can’t believe that somehow I made it happen. Or it just happened. It just happened. I feel really, really in awe of the whole thing coming together.”