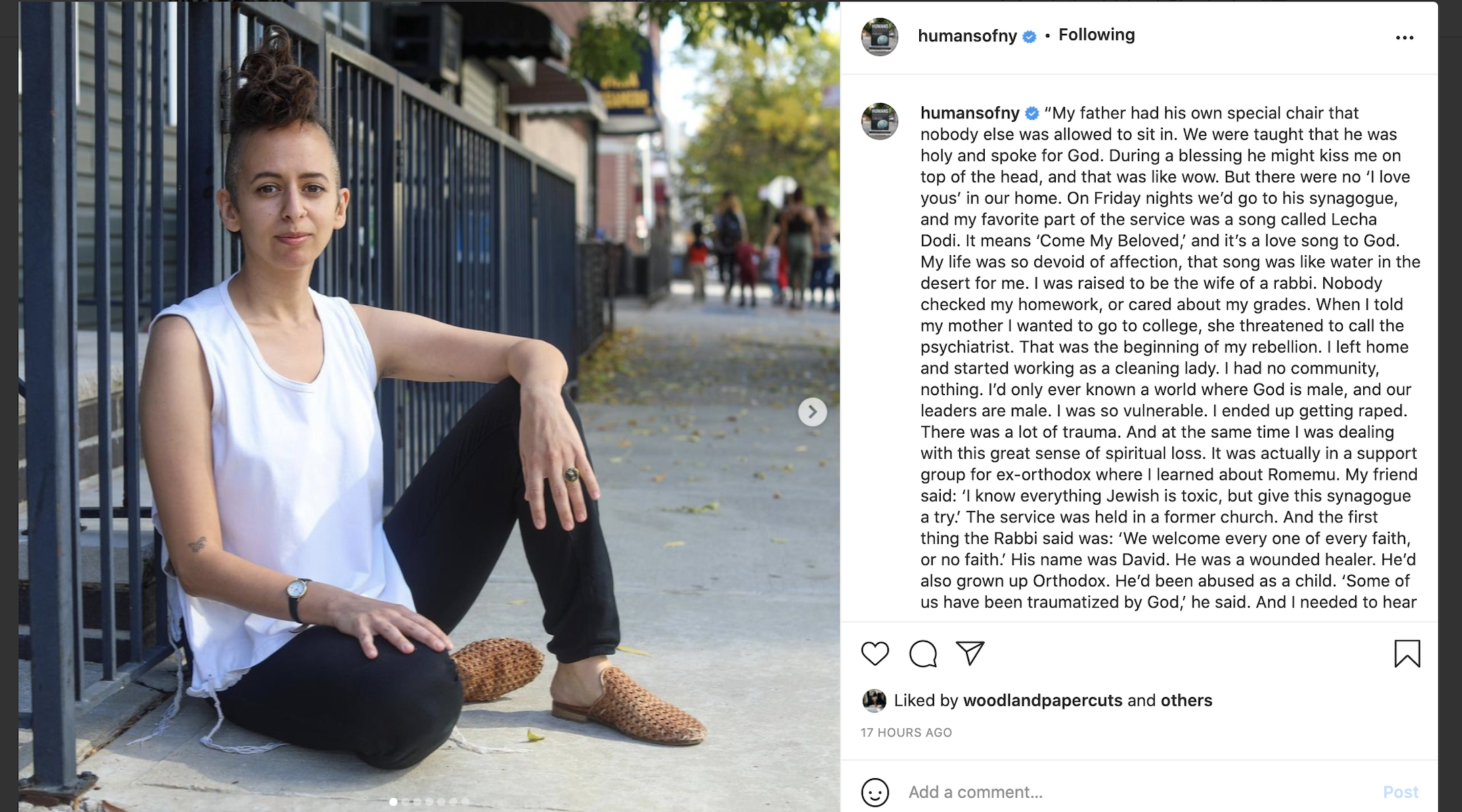 (New York Jewish Week via JTA) — When New Yorkers land in the sights of Brandon Stanton, the photographer who runs the Humans of New York photo project, their lives can change forever.

That wouldn’t be much of a change of pace for Jericho Vincent, a rabbinical student who popped up on Humans of New York late Thursday. After a portrait shot by Stanton, there is a series of photos from Vincent’s own collection that documents their journey from living in a haredi Orthodox community, to leaving it, to reconnecting with Judaism at Romemu, a Renewal congregation on the Upper West Side. One photo shows Vincent next to Rabbi David Ingber, Romemu’s founder and spiritual leader who, like Vincent, grew up in and moved away from Orthodoxy.

A post shared by Humans of New York (@humansofny)

In a caption in Humans of New York’s signature as-told-to style, Vincent describes how attending services at Romemu allowed them to reconnect with aspects of Jewish experience that they missed.

“David provided an access point to God that wasn’t toxic. He taught the same texts, and same parables,” Vincent says. “But his interpretations were different. More tolerant. More progressive. During that first service we sang ‘Lecha Dodi.’ I closed my eyes. And I had this vision of myself as a child, singing in my father’s synagogue. It’s almost like the two of us were singing together. We finally had permission to exist at the same time.”

The Humans of New York feature isn’t the first time that Vincent has told their story. Vincent’s memoir, “Cut Me Loose: Sin and Salvation After My Ultra-Orthodox Girlhood,” published under their old name, came out in 2014; an excerpt ran on the Jewish Telegraphic Agency. That year, The New York Jewish Week selected Vincent as one of its annual “36 Under 36,” recognizing their work with Footsteps, an organization that supports Jews who have left Orthodox communities.

Since then, Vincent has spoken widely on issues of abuse and trauma in Orthodox communities, come out as nonbinary and articulated what they are calling genderqueer theology.

“It has been revelatory to find all these traces of gender-bending figures in our tradition that make me feel affirmed and connected to my ancestors,” Vincent told JewishBoston earlier this year.

Last year, Vincent began rabbinical school through Aleph: Alliance for Jewish Renewal, receiving a prestigious Wexner Fellowship to support their training. According to an update posted by Humans of New York, Ingber wrote a letter of recommendation.

“If you’ve found me from @humansofny, welcome!” Vincent wrote on Instagram Thursday before offering a quick summary of what their new followers can expect — and a preview of what they have coming up.

“I’m at work now on a book about intergenerational trauma and spirituality and I’m also working on my rabbinical ordination,” Vincent wrote. “I post lots of stuff on trauma/feminism/transformation/gender/spirituality/Judaism here!”

A flood of appreciative comments followed in response, from people all over the world who identified themselves as having a range of relationships to religion. At least one person identified herself as “OTD,” shorthand for “off-the-derech,” a phrase that refers to people who have left Orthodoxy.

“Hey, another Otd human here… thank you for sharing your story,” wrote Charlie Lewin, an artist living in the United Kingdom. “It hit close to home and I cried reading it. Lots of love from across the pond.”

The 11-year-old Humans of New York near-daily photo project has showcased Jewish stories before. They’ve included a Jewish journalist’s instructions to his sons about giving charity, the diverse experiences of people living in Jerusalem and the stories of Holocaust survivors.