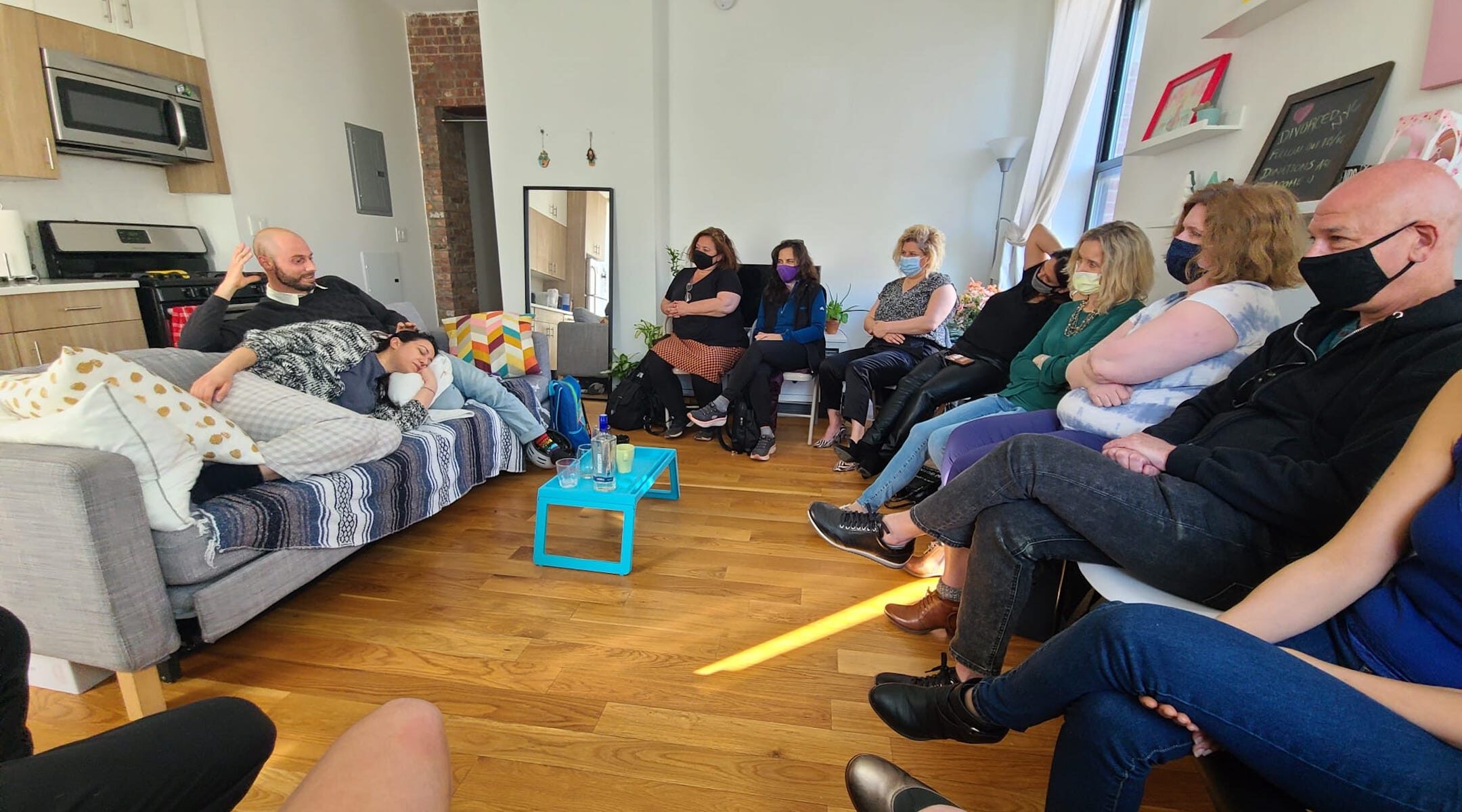 Before a recent production of "Divorced," a play exported to the United States by Tel Aviv's Cameri Theatre and staged in the homes of willing hosts, actors arrive a few hours before showtime to place props around the apartment and decide how they can use the space best for that night's performance. (Divorced NYC)
Advertisement

(New York Jewish Week via JTA) — “Welcome back to live theater!” Yoni Vendriger says, standing before the audience before the show begins. It is, I realize, the first time I’ve seen a play in a theater since the start of the pandemic in March 2020.

Except the theater, in this case, is an apartment in the Bedford–Stuyvesant neighborhood of Brooklyn, and the “stage” is, for most of the show, the living room couch.

About 15 of us make up the audience, most of them friends of the apartment’s residents. Everyone in the room is in their 20s, and it feels more like a house party than a play as we get drinks and snacks and introduce ourselves. When the play is about to begin, we sit against the back wall in folding chairs and on extra couches. Vendriger, the show’s producer, gives the standard directives: silence our cell phones, try not to use the bathroom, enjoy.

We’re here to see “Divorced,” the American version of the Israeli play “Grushim,” which was developed last year by Tel Aviv’s Cameri Theatre during the height of COVID lockdowns. Cameri, which receives funding from the Israeli government, is one of two main theaters in Israel, and is the official theater of Tel Aviv. The theater produces Hebrew adaptations of mainstream international plays as well as intimate, original Israeli plays that tour around the country. 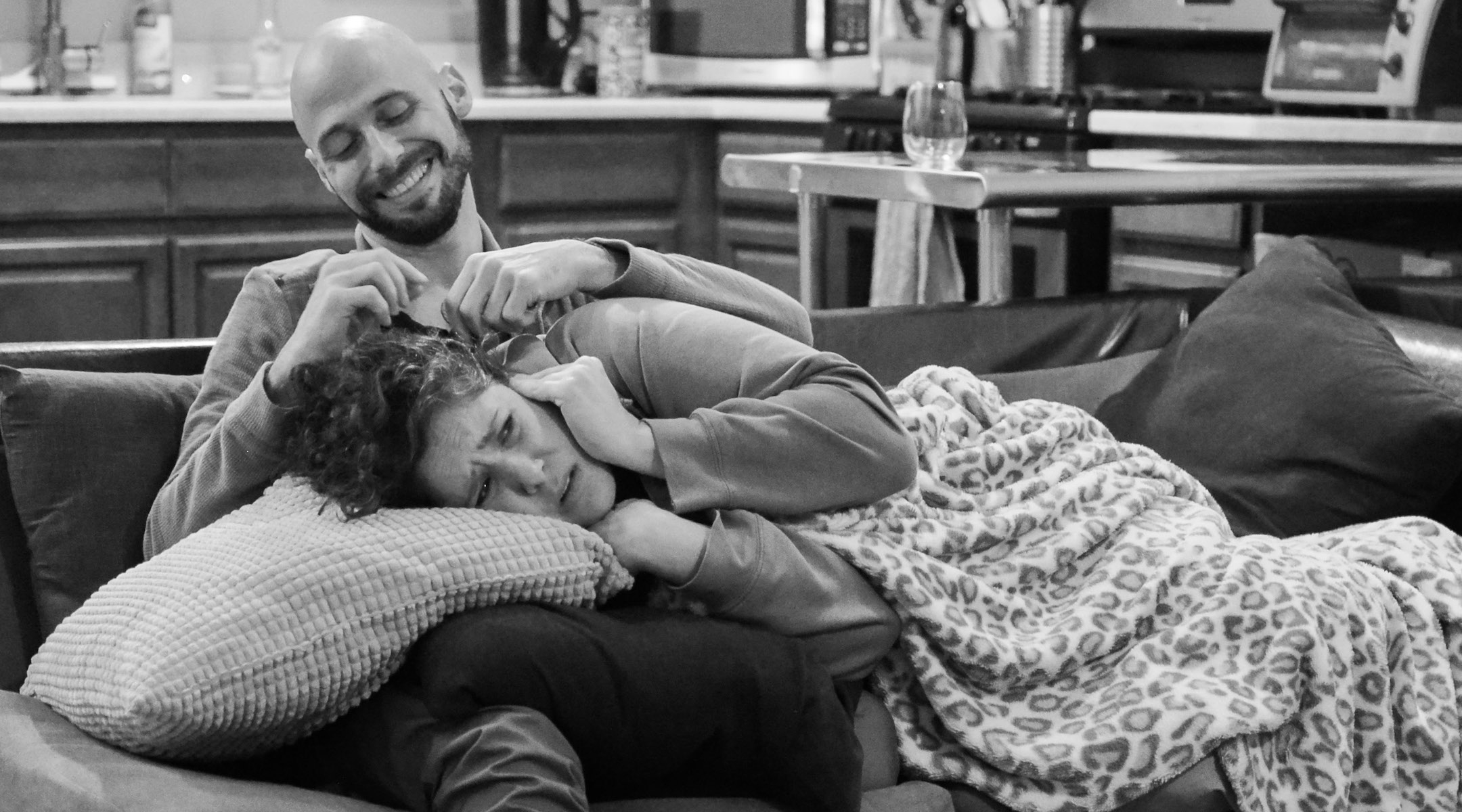 “Grushim” is part of “Out of the Box,” an initiative by the theater to make art and theater accessible to more people during the pandemic. Some of the plays were performed over Zoom and/or live streamed; others, like “Grushim,” were produced to be performed in people’s homes or backyards, where audiences can maintain their bubbles.

“The idea was, if people can no longer go to the theater, then Cameri will bring the theater to them,” Vendriger told the New York Jewish Week.

“It sounded fun. I’m friends with Yoni and he told me about it, so I offered to host and invited my friends to buy tickets,” said that evening’s host, Zach Schaffer, before the show. Other hosts find out through social media or word of mouth; their addresses are not revealed until the tickets are purchased.

Written by Gur Koren, the leading dramaturge at the Cameri, “Divorced” is the story of two characters, Maya and Ben, who share a child together and had split up five years previously. Maya’s most recent boyfriend has just broken up with her, and Ben is the only person who knows her well enough to help her move through it. It’s an intense and comedic story about a friendship and a connection that nothing — even new loves — can break.

“This play was born from this need, this desire, to bring art and connection into people’s homes,” said Vendriger, who produced the American version through his non-profit organization, the Israeli Artists Project.

The Israeli Artists Project, launched in 2018, aims to produce and promote Israeli art, theater and music throughout the New York area. The project connects Israeli artists living throughout the area and showcases their work across the city, as well as producing its own shows, some with original music.

For Vendriger, producing this particular play meant finding a director, casting two sets of actors to alternate performances and translating the Hebrew version into English and making it feel more local to New York.

The play’s four actors, all in their 30s — Maia Karo, Ron Orlovsky, Emilly Bènami and Matan Zrachia — are members of the Israeli Artists Project, so Vendriger had worked with them before. They perform the show in both its English and Hebrew versions depending on the night. 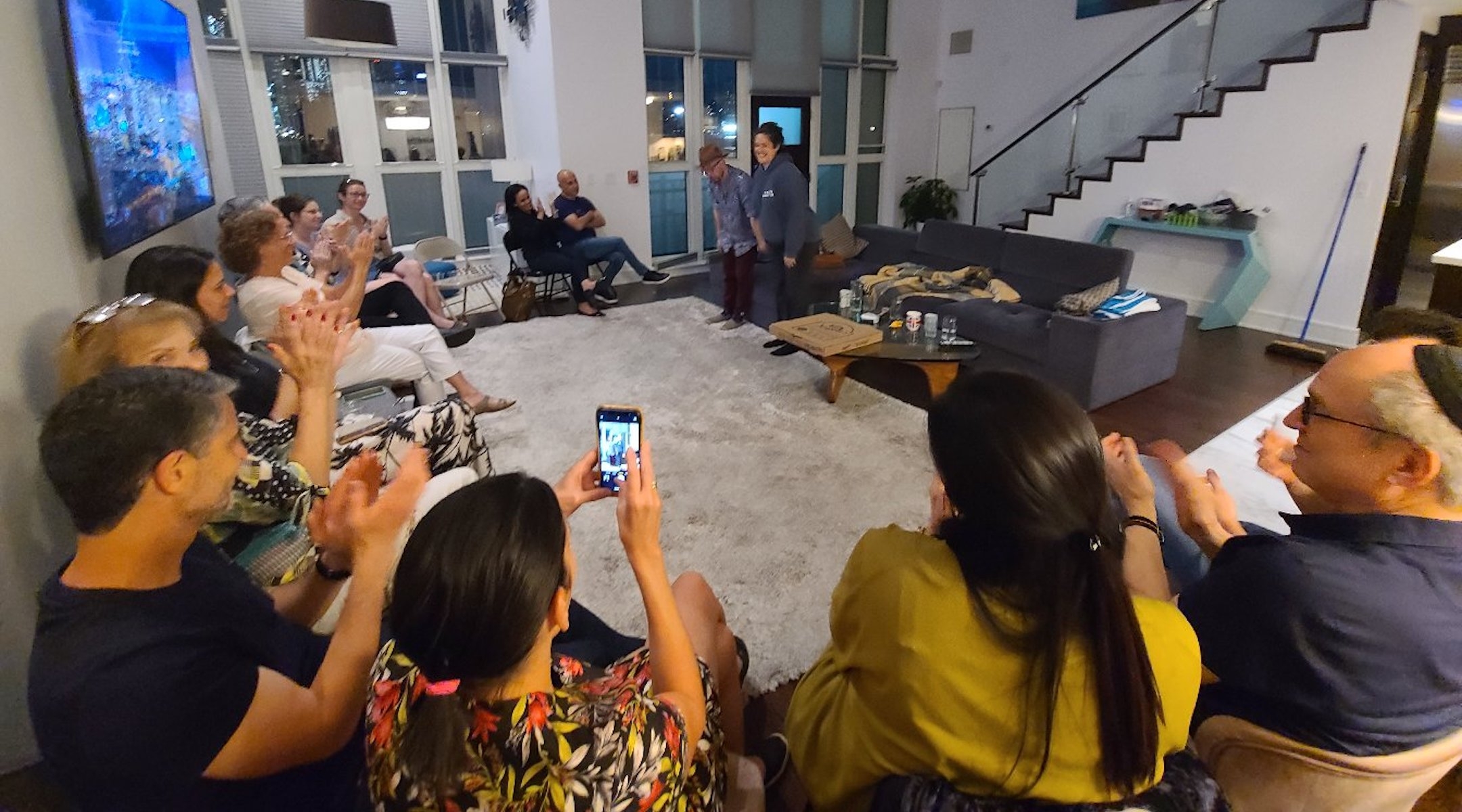 In Israel, audiences can now see the play in theaters. But since its arrival in New York City in June, “Divorced” has relied on people to host the show in their apartments, as it was originally intended. Some months, the show runs six times, in six different apartments. Some months there are only two willing hosts. “It’s really up to however many we can organize,” Orlovsky, who alternates the male lead with Zrachia, told me.

“We created a play that can take place in any setting, without any lighting, without any space,” said Zrachia, who also directed the New York adaptation. “It’s just two people, having a conversation.”

Though apartment-based theater became something of a phenomenon during the pandemic, I had yet to experience such a production. I was excited — and, if not quite skeptical, at least slightly unconvinced about the whole premise.

Until it started, that is. I fully forgot I was in a stranger’s apartment while I was watching the show. The room was small enough that I could hear every word, every inflection, every sigh. I was the closest I’d ever been to a “stage” — only a few feet away — and I could see every wince, smile or eye roll.

“You were so into it,” Karo, the lead actress that evening, tells me after the show when I go up to give her a hug. “The energy of the audience makes a huge difference. I was like, ‘I must be doing a great job.’”

Honestly, the experience brought a whole new meaning to live theater. By the end, I was not only willing to watch the whole play again, I also wanted to host a production in my apartment.

Vendriger said the show will run as long as it can.

“I don’t necessarily see an end in sight,” he said. “Even as Broadway opens up, there will always be people who prefer not going into a theater with strangers, or people who still want to see small, intimate experiences. When you watch a play like this with your friends and family, or even people you don’t know, it becomes a meeting place and a gathering place for people with similar interests to arrive at a specific location and share the experience together.”