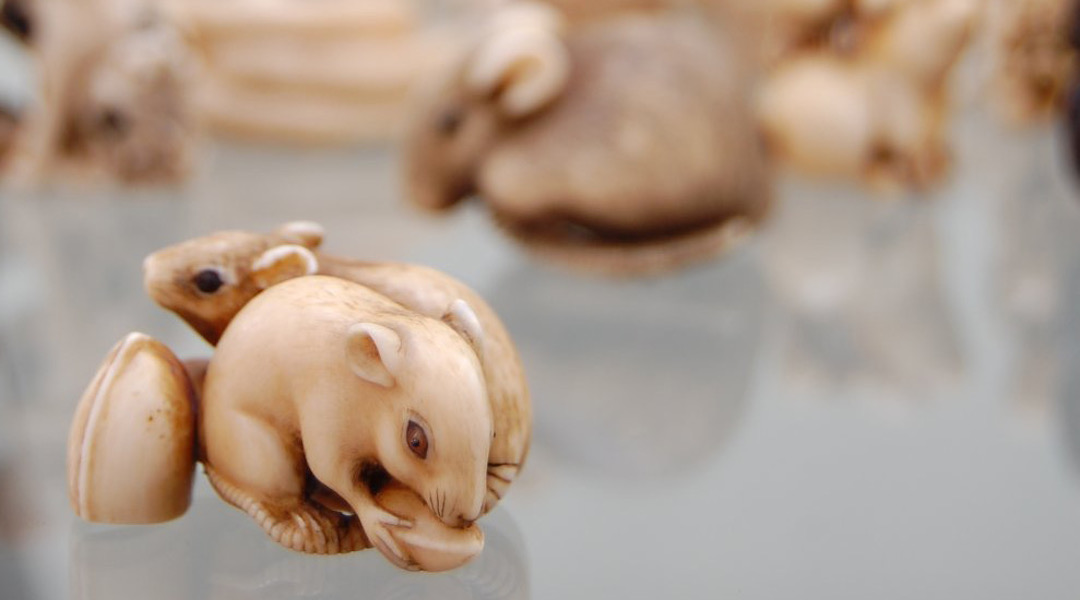 Various netsuke figurines from the de Waal Family Collection are on display at the Jewish Museum in Manhattan as part of the exhibit, “The Hare with Amber Eyes,” which traces the rise and fall of the Jewish Ephrussi family. (Jewish Museum)
Advertisement

(New York Jewish Week via JTA) — Edmund de Waal believes that objects, like families, are diasporic. They start in one place and end up in another, accumulating stories.

A master ceramist who exhibits his work internationally, de Waal is the author of the 2010 award-winning bestseller “The Hare with Amber Eyes: A Hidden Inheritance,” a memoir of the flourishing and fall of his European Jewish family’s banking and fine art dynasty.

Now the subject of an exhibition set to open Friday at The Jewish Museum in Manhattan, the book captured worldwide attention for its graceful and original storytelling, conjuring lost worlds of pre-Holocaust Europe through material objects and the stories they continue to tell.

On view at the museum are those objects: family photos, letters, mementos and art from the family’s collection, including paintings by Jean-Honoré Fragonard, Berthe Morisot, Claude Monet, Gustave Moreau and Pierre-Auguste Renoir.

At the heart of the exhibit is the eponymous hare, one of a large collection of netsuke, tiny intricately carved Japanese figurines made of ivory and wood. Inherited by the author, whose Dutch-born father served as the Anglican Dean of Canterbury, the netsuke inspired his search and represent the family’s rise, rupture and resilience.

“There is this thing about tactility, about objects, about what they hold,” de Waal said in an interview from his London studio last week. “I honestly feel this idea that when you make something and pass it on, that there is a transference of energy and emotion and imagination. I firmly believe that objects tell stories. If you are obsessive enough, you can work out the stories they might be telling.”

He continued, “No stories are straightforward. When you are trying to tell a story which is complex, like a family story, which is about memory and emotions and things which are explained and things which are withheld — it’s about secrets and silences as much as things that are passed down.”

In the style of the memoir, the exhibition traces the history of de Waal’s paternal family, the Ephrussis, an influential Jewish family whose roots were in Berdichev, a village in the Pale of Settlement in what is now central and western Ukraine. In 1840, Charles Joachim Ephrussi made his way to Odessa, where he was hugely successful in the grain trade, and then to Vienna, where the family further increased their wealth, prestige and philanthropy.

In the 1870s, a grandson of the family patriarch also named Charles Ephrussi, an art critic and collector (a cousin of the author’s great-grandfather), acquired a collection of 264 netsuke in Paris and kept them alongside paintings by his friends, including Renoir. The figurines were probably admired and handled by Charles’ friend Marcel Proust, who would visit his Parisian salon, before they were sent as a wedding gift to an Ephrussi cousin in Vienna. 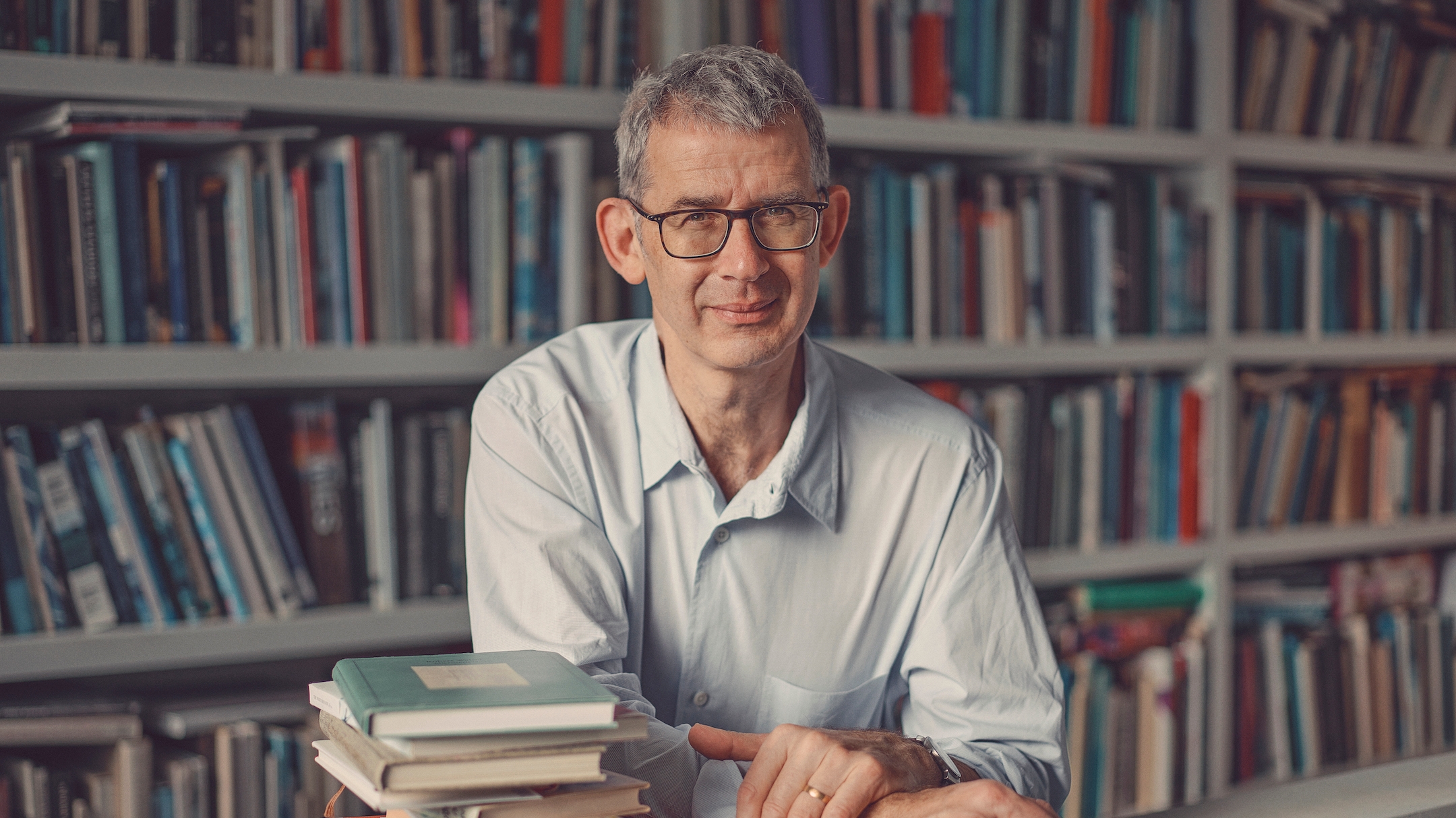 In 1938, the Nazis looted and then occupied the Ephrussis’ grand Viennese palace and family members faced persecution, exile and death. The netsuke were secretly hidden in a mattress by an aide loyal to the family. After the war, when the netsuke were rediscovered, the author’s grandmother brought them to England, and later his great-uncle brought them to Japan, where Edmund first saw and touched this “very big collection of very small objects” in 1981.

At The Jewish Museum, the amber-eyed hare and the other miniatures, which de Waal describes as “seductively touchable” in the memoir, are behind glass. Most are signed by the artists who created them.

“I’m hoping the intimacy of the exhibition allows you to feel and sense that you are very close to them. You can’t touch them, but you can feel them,” he says. He describes it as an immersive exhibition.

“The delicate process of excavation is part of the whole idea of the exhibition,” he said. “It’s about discovery … a genuine attempt at storytelling.”

Visitors to the exhibit will be able to hear de Waal reading from the memoir on an audio guide as they discover the netsuke as well as other objects.

They include a silk damask Torah parochet (Torah ark curtain) made from the wedding dress of a family member and pince-nez, or eyeglasses, made of glass and metal. The glasses belonged to Viktor von Ephrussi, who was born in Odessa in 1860 and died stateless in 1945.

Among the netsuke are a persimmon with a ladybird, a snake on a lotus leaf, three mice playing and a monkey eating a peach. There’s also a 1978 portrait of de Waal’s father, Victor de Waal, which the author says looks rabbinic.

Elizabeth Diller and her studio of Diller, Scofidio + Renfro interpreted and designed the exhibition. The daughter of Holocaust survivors, she and de Waal worked on the project for 10 years to bring the memoir off the page.

Asked to imagine what it will be like to present in The Jewish Museum, with so many objects he has seen before now assembled in one place, de Waal says, “It’s an extraordinary, beautiful, lyrical thing to see something again with fresh eyes. For me it’s incredibly painful and poignant. There are things that I first saw 40 years ago in my uncle’s apartment in Japan, or 50 years ago in my grandmother’s house.”

He says that he keeps talking to those who have passed. “Just because they have died doesn’t mean that you’re not still in conversation,” he said.

Behind him in the studio are neatly arranged shelves of many books, and during a Zoom call he points out a few volumes of Rilke’s poetry that belonged to his grandmother and that will not be in the show. He shifts his computer screen and points to a large installation on a wall nearby, with porcelain vessels arranged in a vitrine, based around a poem by Paul Celan.

“I always wanted to be a poet. Poetry is in everything I do. In my installations. I read poetry all the time.” He recently created a poetry library for a cancer support center in England and will roll out the idea across the country.

Several years ago, de Waal gave most of the netsuke collection to the Jewish Museum Vienna on a long-term loan.

“That’s exactly the right place for them,” he says. Referring to the power of storytelling, he continues, “They can work really hard, talking about the diaspora, about what happened in Vienna.” His family auctioned off 79 others, raising funds for refugee charities. 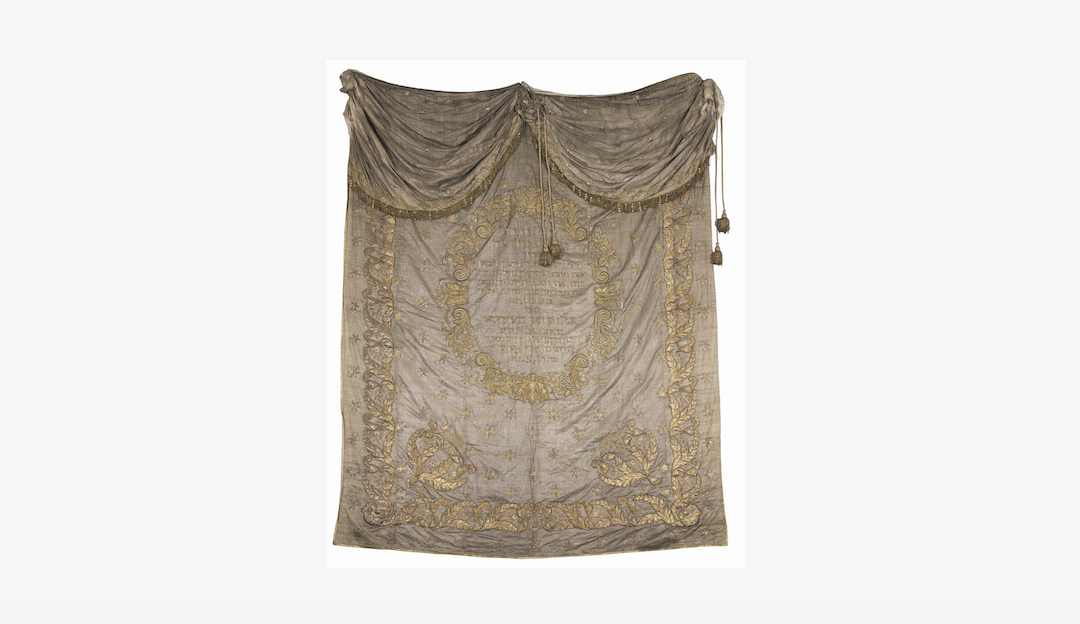 A silk damask Torah parochet (curtain) was made from the wedding dress of a member of the Ephrussi family, ca. 1833. (Donated to the Stadttempel, Vienna, by Hermann Todesco Collection of the Jüdisches Museum Wien)

“We wanted to do this while my dad, who is 92, is alive. We decided to honor the fact that we are a refugee family. We raised a huge amount of money. That’s also storytelling, ” he said. “You are not a passive bystander in this story, but an active participant. These stories aren’t yet finished.

“People say, ‘So you’ve moved on.’ The answer is you can’t move on. [The story] is still ongoing, unsettling, unresolved.” He kept a few of the netsuke.

When I ask what a netsuke feels like in his hands, he says, “It’s a proper playful experience. There’s an expectation of what something feels like. You might know all about the dimensionality. You move it around and always discover something else. There’s a gorgeous moment of delight, as you discover a rat’s tail coiled up, or acrobats doing extraordinary things with their limbs. We are always surprised by objects, that’s the joy.”

For de Waal, writing and artmaking are entwined passions. Best known perhaps for his white porcelain vessels, he often fashions assemblages, shifting the light and space between his delicate, translucent creations. He has also created site-specific installations in museums and libraries around the world, including the Frick in New York City and – on exhibit now — at the Musee Nissim de Camondo in Paris.

He is also the author of “The White Road” about the history – and his fascination with — porcelain. His latest book is “Letters to Camondo,” about another Jewish dynasty whose members lost their freedom, assets and lives to the Nazis.

For the 58th Venice Biennale in 2019, de Waal created an exhibition in two parts: one in the Jewish Museum in the Venetian Ghetto and the second, a “library of exile” constructed inside a 16th-century building on the Grand Canal. It included almost 2,000 books by writers in exile, in 70 languages, from 52 countries. On walls covered with liquid porcelain, de Waal inscribed the names of lost libraries around the world, including those in Sarajevo, Mosul and Aleppo, the rabbinical libraries of Lublin and Warsaw and his great-grandfather’s library in Vienna.

After traveling to other museums, the “library of exile” is now in its permanent home in Mosul, Iraq, serving as the foundation of a new university library replacing what was destroyed.