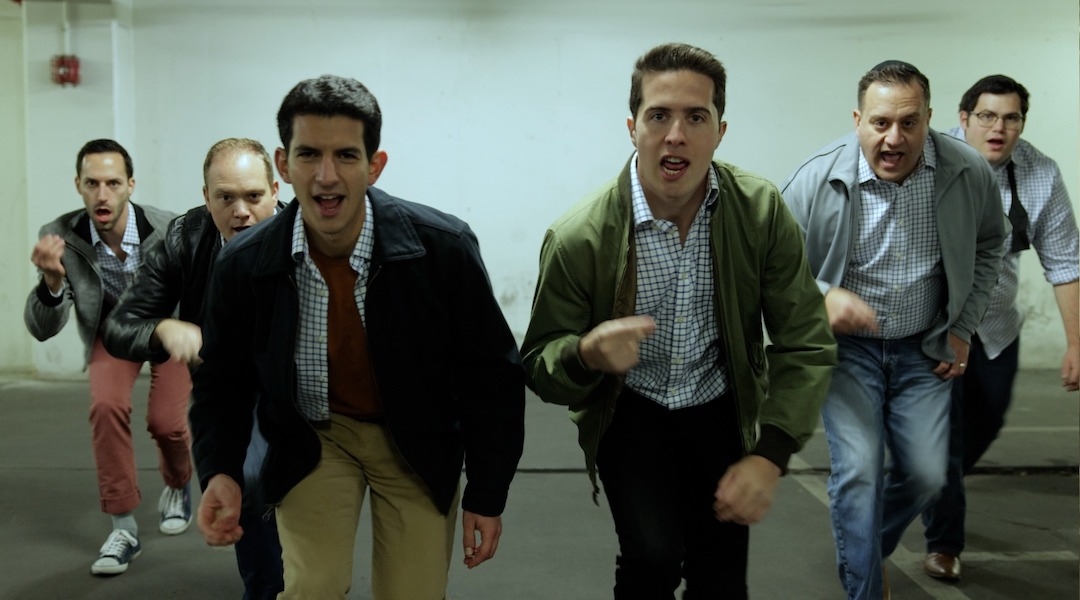 (New York Jewish Week via JTA) — The opening shot is a panorama of the George Washington Bridge, its tower and the surrounding buildings transformed into a flickering menorah with all nine of its candles lit. “A West Side Chanukah Story,” the opening text announces — and immediately, the very New York sounds of traffic and car horns give way to a familiar sequence of snaps and the wordless singing of a well-known tune.

So begins the latest Hanukkah parody video from the New York-based Jewish a cappella group Six13. The video is a voices-only compilation of and riff off some of the greatest hits from Leonard Bernstein and Stephen Sondheim’s iconic 1957 Broadway musical, “West Side Story,” including “Maria” (reimagined here as “Menorah”) and “Tonight” (which becomes “Eight Nights”).

While Hanukkah a cappella parody videos have become something of an annual tradition in recent years, a major inspiration for this particular video is the forthcoming reboot of the 1961 film version of “West Side Story.” Directed and co-produced by Steven Spielberg, with an updated screenplay by Tony Kushner, the new film is set to hit theaters on Dec. 10. “When I heard that was coming out, I was like, when?” original Six13 member and chief arranger Mike Boxer tells the New York Jewish Week. “We are doing this, for sure.”

“West Side Story,” Boxer added, “is one of the greatest pieces of art ever crafted.”

Six13’s Hanukkah-inspired musical medley, filmed on location in Manhattan, is chockablock with clever Festival of Lights puns and imagery. For example, in “On Chanukah” — a version of the “West Side Story” showstopper “America” — the lyrics include: “Chocolate money on Hanukkah/Latkes are crunchy on Hanukkah/Presents from Bubbe on Hanukkah/I want a puppy for Hanukkah!” (This last lyric is notably a reference to David Digg’s 2020 instant classic, “Puppy for Hanukkah.)

It’s truly a delightful watch from this well-seasoned group, which first formed 18 years ago as an outgrowth of a co-ed Jewish a cappella group at Binghamton University. After college, Boxer and a few buddies missed the camaraderie of the group, he said. And so they formed Six13; essentially “just guys who like to sing,” as he described it.

“Over the years, the guys would get a promotion at work, or would do things like get into med school, or have a third or fourth kid, and their time [with the group] would expire,” Boxer said. “The silver lining was, every time we lost someone, we gained someone who was even better.”

These days, Six13 consists of eight members, most of whom range in age from 26 to 32, according to Boxer, who, at 41, is the elder of the group. “I’m the guy who just won’t leave,” he quipped. It members live across the city, as well as in Long Island and New Jersey, which made Manhattan the ideal location for a video — not only is it essential to the spirit of “West Side Story” but it was convenient for everyone, too.

The video’s intro, for example, features six members of the group snapping their fingers and leaning against a chain-link fence. Boxer stumbled across the location — which is a fence that surrounds the playground at P.S. 452 on West 61st Street — as he was dropping off his kids at Abraham Joshua Heschel School. “Perfect!” Boxer recalled thinking. “We’re just going to stand right there.”

Other locations include Morningside Park, the social hall at the Stephen Wise Free Synagogue, the SAR Academy in Riverdale, and the offices of the Manhattan Jewish Experience, an organization that encourages young Jewish professionals to explore Jewish life and meet one another, which sponsored the video.

Six13 has consistently put out a stream of high-quality Jewish holiday parody videos — including a super-catchy sea shanty from Passover 2021, as well as “Bohemian Chanukah,” a version of the Queen epic “Bohemian Rhapsody.”