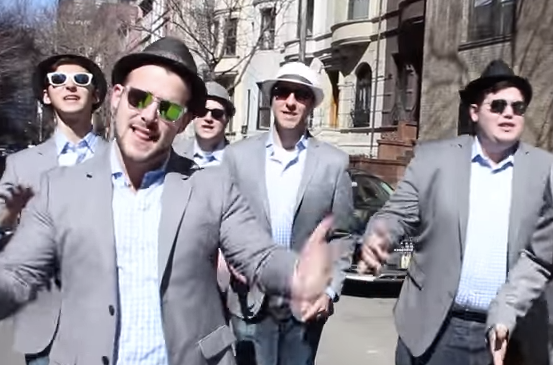 If there had been just one “Uptown Funk” parody for Passover, Dayenu. It would have been enough.

But there are two professionally produced knockoffs of the hit Bruno Mars and Mark Ronson song, which seems to be this year’s “Let it Go” when it comes to Passover-themed parody videos. (Ever since Hanukkah 2010, when the Maccabeats turned Mike Tompkins’ “Dynamite” into “Candlelight,” parody videos seem to have become a regular Jewish holiday ritual.)

In Michael Har Paz’s version, commissioned by the Orthodox outreach group Aish HaTorah, tzitzit-and-sunglasses-wearing guys in a mix of frum and hip-hop attire sing and dance inside an upscale house and on the streets of what appears to be a West Bank settlement.

Some refrains in the Six13 version: “Kids singin’ “Mah Nishtana,” “Don’t be slavin’, just nosh” and “Uptown Passover’s coming to ya.”

As for the Har Paz version? “Pesach funk gon’ give it to you!” “Fill it up the four cups!” “Jews wrote the hallelujah! Don’t be slaves, just rise up!”

If “Uptown Funk” isn’t your style, Congregation B’nai Shalom in Westborough, Mass., has created a parody of Meghan Trainor’s “All About That Bass” called “All About Those Plagues.” The production values are lower than the two “Uptown Funk” parodies, but the cast — members of a Reform temple — is considerably more diverse in terms of gender and ages represented.

Watch them all and tell us which is your favorite:

All About Those Plagues