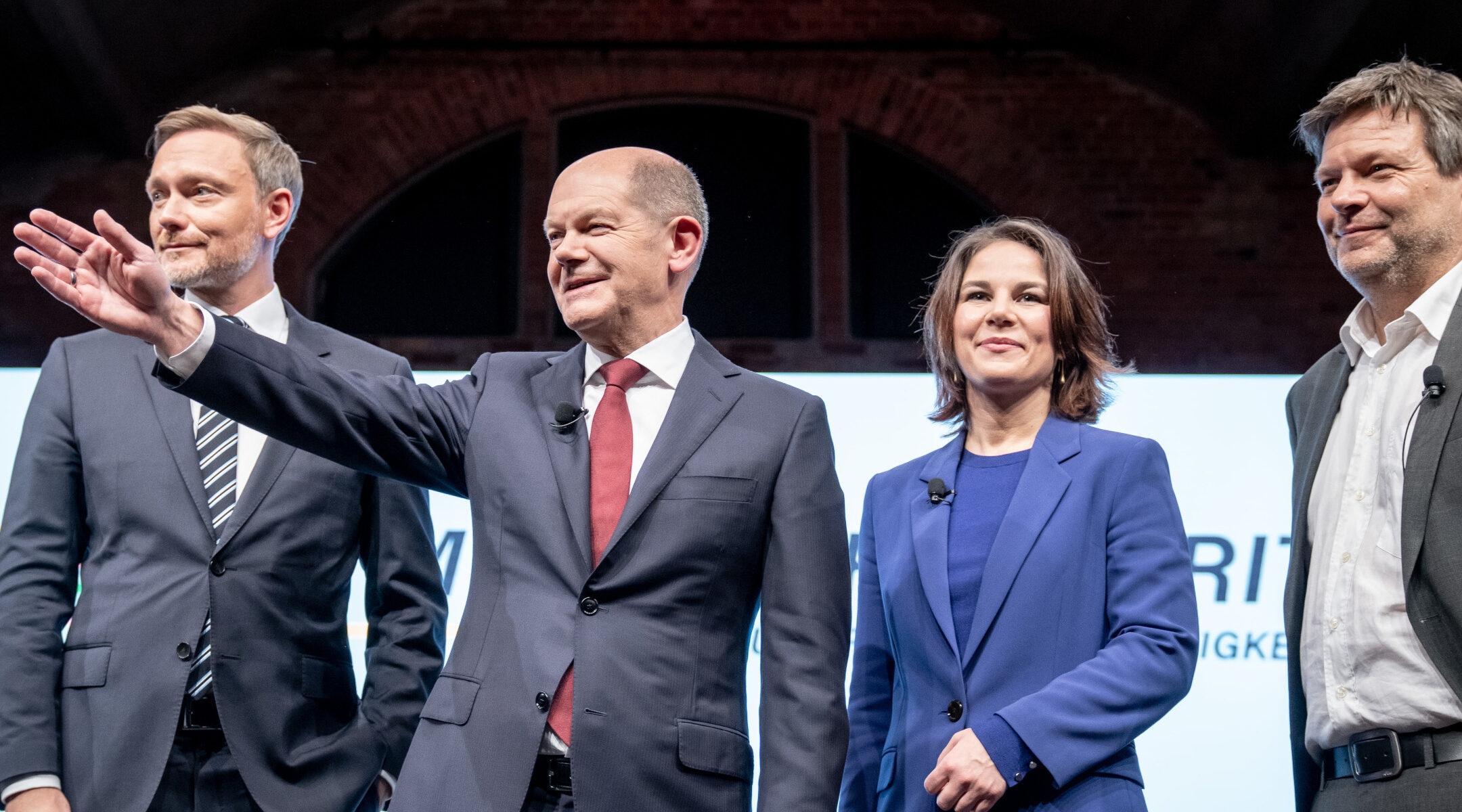 Olaf Scholz, waving his hand, and politicians present the joint coalition agreement of the new ruling parties of the German federal government at a press conference in Berlin on Nov. 24, 2021. (Kay Nietfeld/picture alliance via Getty Images)
Advertisement

The agreement, whose main focus is addressing climate change, was presented Wednesday by the coalition parties, which include the Social Democratic Party of Germany, the Free Democratic Party and the Greens, in Berlin. The coalition agreement determines the division of ministerial positions and major policy themes and marks a milestone toward establishing a government after the departure from politics of outgoing Chancellor Angela Merkel.

A center-left politician for the Christian Democrats who had served four terms since 2005, Merkel is to be replaced by Olaf Scholz of the center-left Social Democrats.

The Central Council of Jews in Germany released a statement welcoming the agreement.

“We are confident about the plans of the future federal government. A successful fight against right-wing extremism and antisemitism are of crucial importance for the future of Germany,” the statement read.

Charlotte Knobloch, a previous president of the organization and current leader of the Jewish Community of Munich, was more reserved in commenting about the agreement.

“I think it sounds good, it has some positive declarations, but I will form my opinion on the new government not based on these words, but on action. So I’m suspending any judgment and waiting for those actions,” Knobloch told the Jewish Telegraphic Agency.

The agreement will help Germany become a “pioneer on climate protection,” the main focus of the agreement, and its government “will invest massively to maintain Germany’s status as a world leader,” Scholz said, according to the Financial Times.

On Jewish issues, the new agreement states: “We will protect Jews and their institutions together with the federal states. It is a shameful and painful state of affairs in Germany that they must be permanently guarded.”

The government “will strengthen initiatives that promote Jewish life and promote its diversity, and combat all forms of antisemitism.”

The previous coalition agreement, signed in 2019, mentioned the fight against antisemitism but not the promotion of Jewish life.

The new agreement also states that “Israel’s security is a national interest” of Germany, and vows to block “antisemitic attempts to condemn Israel, also at the UN.” It states Germany will continue to support the two-state solution to the Israeli-Palestinian conflict and it welcomes normalization of ties between Israel and Arab countries.

The Greens and the future ruling party of Germany, the Social Democrats, or SPD, have criticized Israel frequently. Former SPD leader Sigmar Gabriel in 2012 said the situation in the West Bank city of Hebron was “apartheid,” sparking condemnations that eventually prompted his party to apologize for that remark.