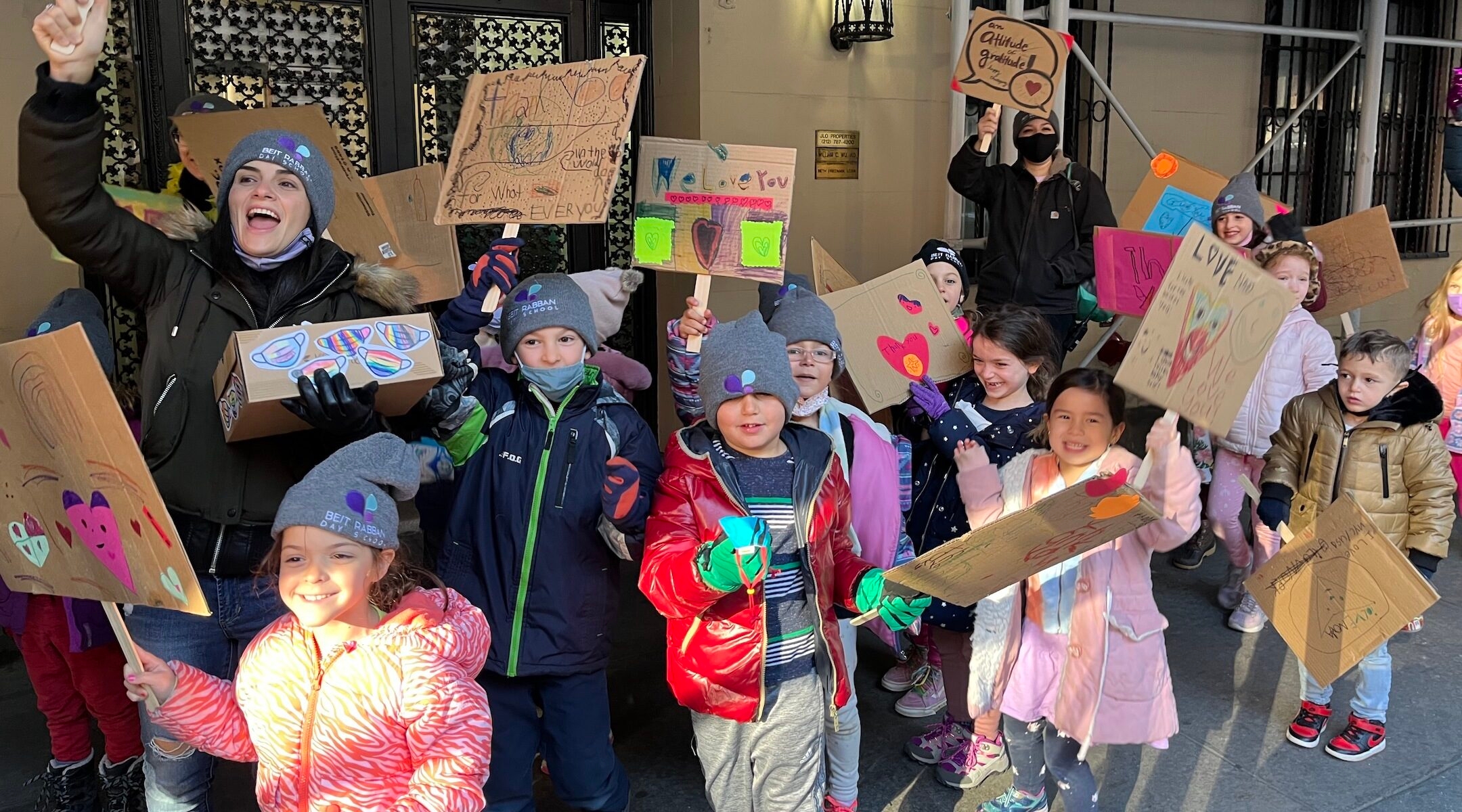 Students and parents from Beit Rabban Day School in Manhattan march to express their gratitude to neighborhood workers on the Upper West Side on the eve of Thanksgiving, Nov. 24, 2021. (Laura Kaler)
Advertisement

(New York Jewish Week via JTA) — More snack time? Longer recess? What could preschoolers possibly be protesting about, wondered a TikTok video that went viral over the Thanksgiving weekend.

In the video, taken from an apartment window on the Upper West Side, children can be seen marching around a corner holding handmade cardboard signs.

“Woke up this morning to preschoolers protesting,” the video narrates, in a voice that sounds suspiciously like Nick Kroll’s Gil Faizon character in his comedy act “Oh, Hello.” That is to say, it is the voice of an old, cranky Jewish man on the Upper West Side, which is a new TikTok text-to-speech effect that is apparently meant to sound like (bear with us) Marvel’s Rocket the Raccoon.

“I can’t figure out their cause,” the narrator continues. “They’re chanting Ingrid.” Indeed, the children — and the adults that accompany them — can be heard chanting “Ingrid! Ingrid! Ingrid!” while dancing at the end of the video.

“Whatever their cause is I support it,” captioned user @phoebebean, who posted the video, adding the hashtag #youngrevolutionaries.

Whatever their cause is I support it #youngrevolutionaries

As it turns out, the young revolutionaries in the video — which has more than 480,000 views and nearly 105,000 likes — are actually students at Beit Rabban Day School in Manhattan, participating in their annual “Erev Thanksgiving Day Parade” on the day before the holiday.

Stephanie Ives, the head of school, told the New York Jewish Week that the parade is an annual tradition that began four years ago. Students chant “Thank you” and “You are appreciated” to city workers and other people considered helpers along the route.

The parade accompanies a unit about gratitude in the Jewish tradition, or “hakarat hatov,” Ives said. Each class fills shoe boxes with handwritten thank-you notes and delivers them to places in the neighborhood chosen in a vote. 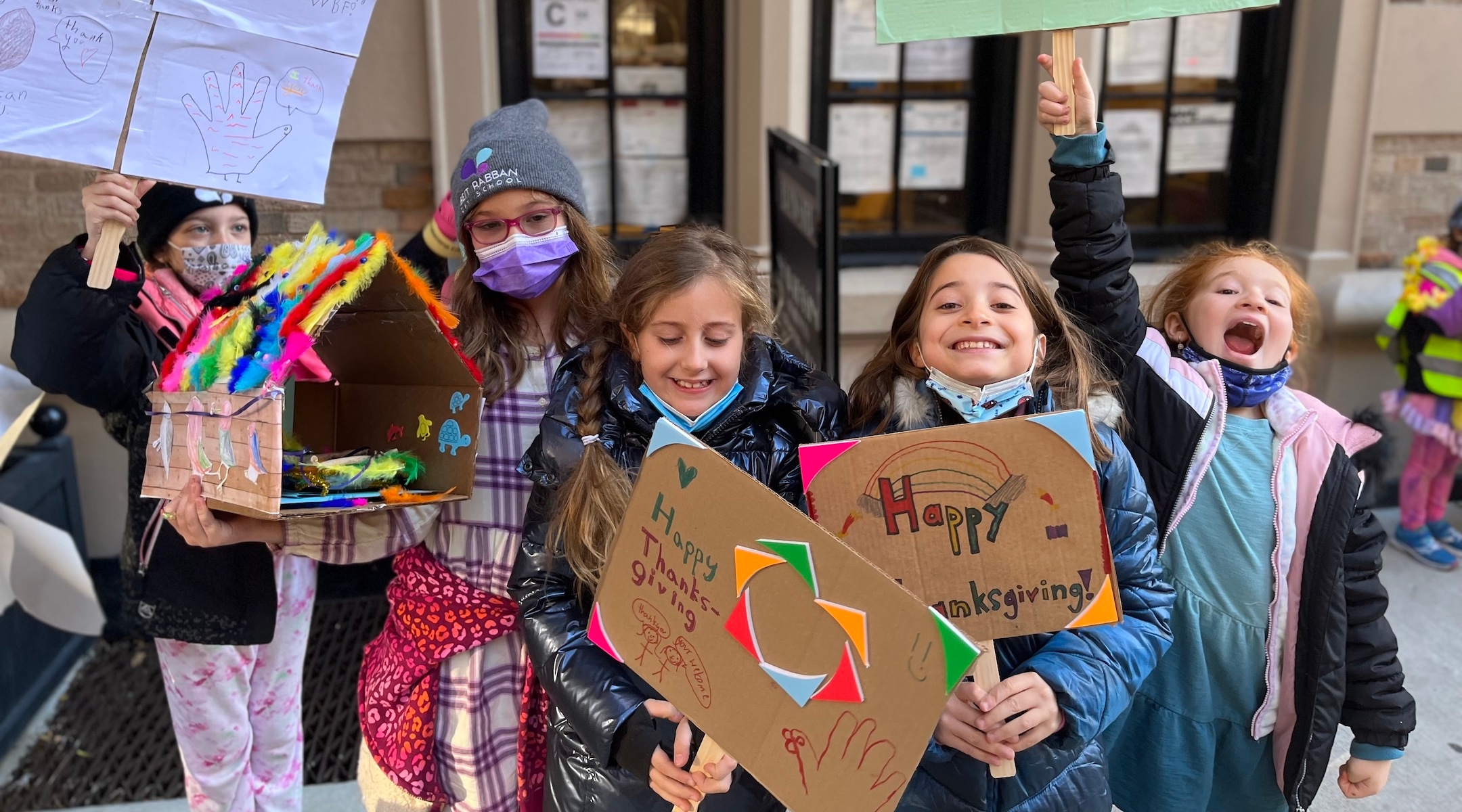 Students from Beit Rabban Day School in Manhattan were caught on a TikTok video that went viral, Nov. 24, 2021. (Laura Kaler)

“I think it’s actually quite inspiring,” Ives said. “We didn’t want to do a Thanksgiving feast — they’re so wasteful and we don’t really know what the kids get from them. We were brainstorming what can we do that is a real hands-on lesson in gratitude that will stick with these kids.”

One of the TikTok commenters agreed, saying they were  “witnessing a core memory forming.”

“It’s one of my favorite school days of the year — everyone is so joyous and the neighborhood lights up with smiles,” said Laura Kaler, the director of programs and communications at Beit Rabban.

Phoebe, who made the video and posted it on TikTok, is Jewish. “I had no idea what they were chanting about but I figured I’d record it anyway. It looked like they were saying thank you to people,” she said. “I had a feeling it would go viral because it was just too cute.”

The comments on the 14-second video were equally curious and supportive. Many suggested what the preschoolers were demanding. “No more unpaid nap hours,” wrote one user. “More fruit snacks!!” offered another. “They have my full 100% support,” read a comment that got 705 likes.

Other commenters dedicated themselves to deciphering the “Ingrid” chant. “Plot twist: Ingrid is their classmate on timeout,” a user guessed. “Ingrid stayed home that day and they were simply not going to have it,” was another one.

And who is Ingrid, and why did the students chant her name? It was the young students thanking their principal, Ingrid Goldfein, in the most adorable way.