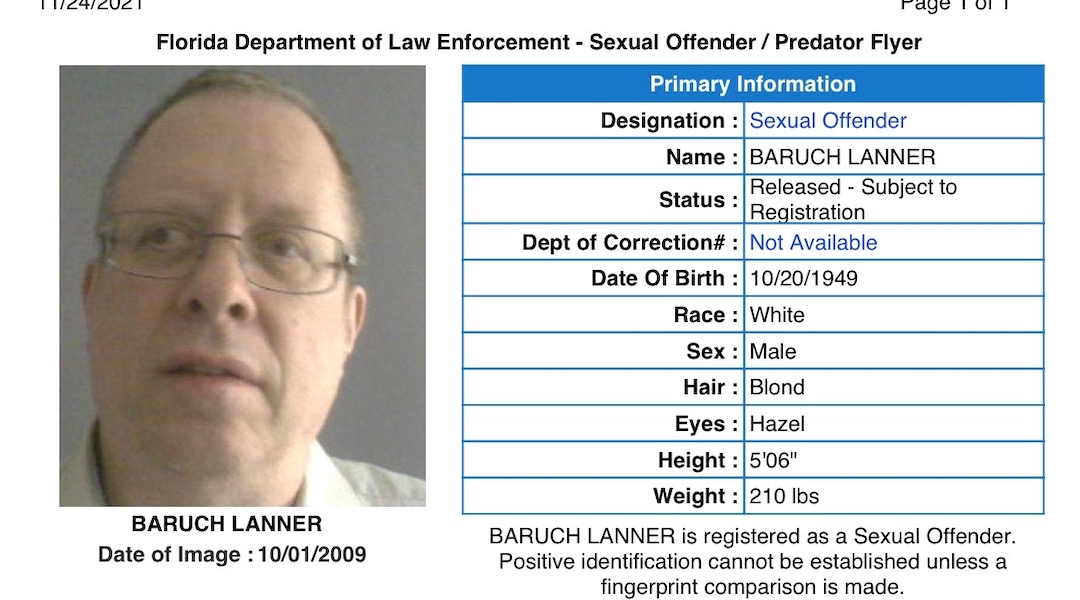 (New York Jewish Week via JTA) — Hours before the deadline for New Jersey’s “lookback” law, a fifth plaintiff and a fourth defendant were added to a civil lawsuit that was filed earlier this week against the Orthodox Union; its youth arm, the National Conference of Synagogue Youth; and Rabbi Baruch Lanner, a one-time top official with both groups.

The newest defendant is the Hillel Yeshiva High School in Ocean, New Jersey, where Lanner was principal in the mid-1990s, when the latest plaintiff, described here as Marcia (not her real name), was a student. She was physically and sexually abused by him over an extended period of time, according to the suit.

Meanwhile, three top executives of the OU and NCSY sent a letter to their board members around the country in response to the lawsuit, filed Monday in the Superior Court of New Jersey.

In the letter, which the New York Jewish Week obtained, the three rabbis say their leadership “shares deep regret for the suffering caused by past abuses” and is “firmly committed to operating in a manner that is consistent with the highest Torah and legal standards to ensure the wellbeing of our youth.”

Lanner served nearly three years in prison for sexually assaulting students at a high school in New Jersey, but until this week had not been the subject of a civil lawsuit against organizations that employed him. According to the women bringing the suit, Lanner’s employers knew about his abusive behavior.

New Jersey’s “lookback” law provided a two-year window during which civil claims of child abuse could be brought forward even if the statute of limitations for such claims had expired. The window closed at midnight Nov. 30.

The suit alleges that the prominent Orthodox institutions knowingly allowed the rabbi’s predatory behavior at NCSY and Hillel High School to continue, despite numerous, long-standing complaints that he physically and emotionally abused girls and boys in his charge.

The Jewish Week first reported Marcia’s account of the abuse and why she went to the authorities in 2000.

In that article, and as described in the lawsuit, she recalled that she was a 15-year-old freshman when Lanner first called her into his office. She said he closed the door and the blinds on the windows and spent extensive time with her. Over a period of time, in the privacy of his office, he would yell and spit at her and molest her sexually.

When Marcia later learned that Lanner was abusing other girls, she threatened to reveal his activities. He, in turn, as principal, had her expelled from the school, she said.

Several years later, when The Jewish Week’s investigative report on Lanner was published, Marcia learned of the story and told her parents of the abuse she had endured. She filed a criminal complaint against Lanner — as did another teenager with a similar experience — which led to the rabbi’s arrest, conviction and jail sentence.

Neither of the young women knew of the other’s ordeal until they met in advance of the trial.

In their letter sent this week, the heads of the OU and NSCY said “the resurfacing” of the Lanner scandal “reminds us of the ongoing pain suffered by his victims and of our tremendous responsibility to be vigilant and proactive in ensuring the physical, sexual and emotional safety of every participant in our programs. We may not permit the failures that allowed for the abuses committed by Lanner to be repeated.”

Their letter reiterated their organizations’ commitment to the “physical and mental safety of youth,” and noted that “strong policies and procedures … to prevent abuse” were put in place following the reports of the Lanner abuse two decades ago and have been “enhanced and expanded on multiple occasions over the years” and will continue to be reviewed going forward.

Several of the plaintiffs in the case, who suffered abuse from Lanner in their teens, told The Jewish Week they felt that the OU and NCSY failed to reach out to them at the time to offer an apology or assistance.

Bobbi Krady, business director of the Hillel Yeshiva, told The Jewish Week the school had “received no documentation” regarding the lawsuit and had no comment.

Basyle Tchividjian, one of three attorneys for the plaintiffs, said that Marcia only learned of the lawsuit after reading The Jewish Week’s article on Monday. She contacted him Tuesday morning and was added as a plaintiff that afternoon.

Several other reported victims of Lanner learned of the lawsuit when the article was posted, Tchividjian said, but were too late to file before the deadline.