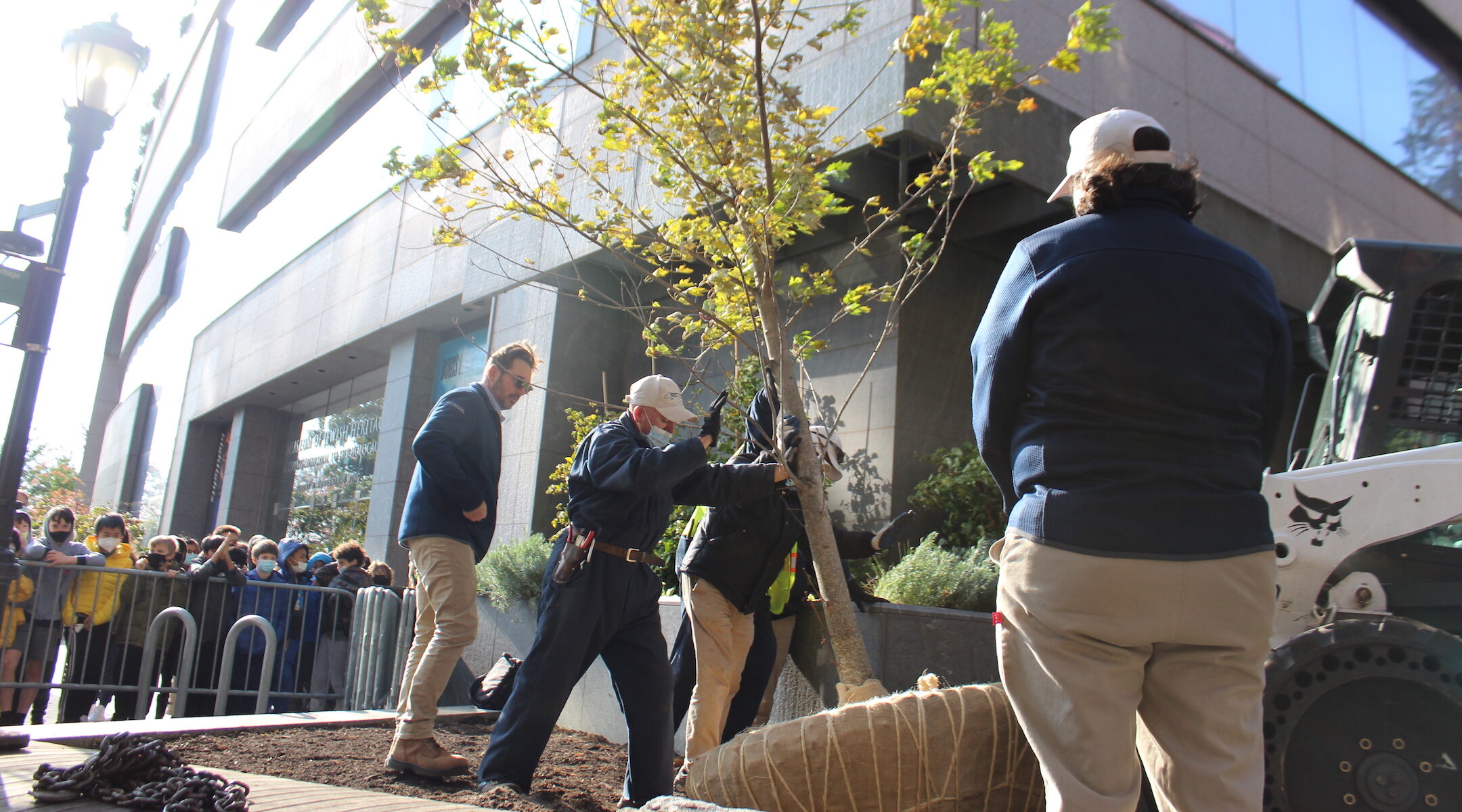 (New York Jewish Week via JTA) — In January of 1943, Irma Lauscher, a teacher at the Theresienstadt concentration camp in Czechoslovakia, smuggled a tree into the camp so that the Jewish children imprisoned by the Nazis could celebrate Tu B’Shevat in a secret ceremony. The children used their water rations to nurture the sapling.

Of the 15,000 children who were imprisoned in Theresienstadt during the Holocaust, fewer than 200 survived. But the tree was still standing when the camp was liberated in 1945, and a sign was placed at its base marking it as a symbol of resilience.

“As the branches of this tree, so the branches of our people!” said the sign under the tree, which survivors named “The Tree of Life.” Lauscher, who survived the Holocaust, had once requested to be buried alongside the original tree.

In the 1980s, branch saplings were cut from the tree and planted in Jerusalem, as well as in San Francisco, Chicago and Philadelphia to accompany a traveling exhibit of treasures nearly lost in the Holocaust.

Now, New York City — home to the largest community of Holocaust survivors and their descendants of any city outside Israel — will also nurture a descendant of the original tree. Dr. Roger Pomerantz, a Jewish philanthropist who owns a farm in Pennsylvania that holds seven trees grown from cuttings of the original tree, has donated one to the Museum of Jewish Heritage in Battery Park City.

“The Children’s Tree,” as it will be known, will be unveiled to the public today during a dedication ceremony held jointly by the Museum of Jewish Heritage and the Battery Park City Authority. Currently 15 feet tall, the silver maple tree will have a permanent home in Battery Park City, in front of the museum.

“We want everybody in Battery Park City to be able to walk by and see a piece of history,” Jack Kliger, the president and CEO of the Museum of Jewish Heritage, told the New York Jewish Week. “To not only remember but to understand what resilience means in the face of tremendous odds.”

Calling the project “a labor of love,” Kliger said transporting the tree involved hiring a horticulturist to uproot the tree from Pennsylvania and working with Battery Park City Authority to find the right space for the tree.

As at Theresienstadt, the tree will be cared for by children — in this case, students at PS/IS 276: The Battery Park City School, a public elementary and middle school located just across the street from the museum. In collaboration with the museum, the school will make the tree part of an ongoing curriculum in Holocaust education.

“They were planting a tree that would live in a world that they would not live in, as sort of a physical expression of belief in the future and a form of spiritual resistance,” said Michael Berenbaum, a Holocaust historian who was instrumental in the transplant of the tree to New York, of the imprisoned children who cared for the original Tree of Life.

“Now their legacy can continue,” he added.

“Resilience is represented by both humans as well as trees,” Kliger said, comparing their abilities to survive as well as endure such a long, roundabout journey to New York.