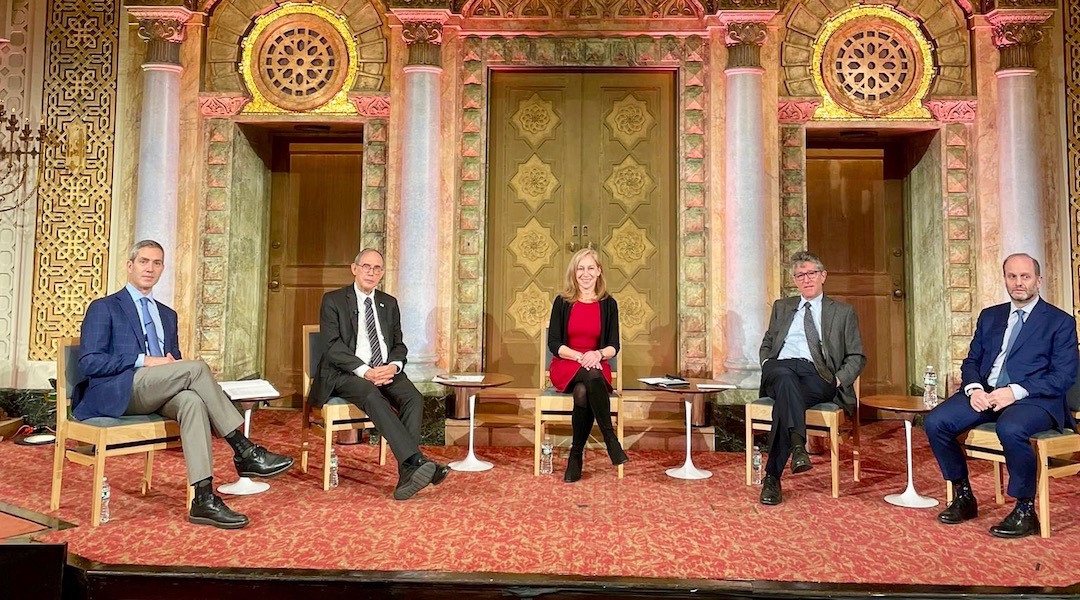 (New York Jewish Week via JTA) — Israel will set plans in motion to renovate the non-Orthodox prayer space at the Western Wall, an Israeli official said Tuesday in New York.

The current Israeli government is expected to implement an agreement, shelved under former Prime Minister Benjamin Netanyahu, that would expand an area of the holy site where men and women could pray as they please.

But speaking to journalists at the Israeli consulate in New York City, Diaspora Affairs Minister Nachman Shai said that before it formally implements the 2016 agreement, the government plans to do more modest physical upgrades to the site. They include expanding physical access to the Western Wall itself (most of the area is close to the wall but not adjacent to it) and repairing some physical damage to the prayer area.

The non-Orthodox section was temporarily closed in 2018 when it was struck by a 400-pound boulder that broke off from what is a 2,000-year-old retaining wall surrounding the Temple Mount complex.

The government “will continue the construction” that was initiated in 2016, Shai said. “There are a few stones there that they have to remove.”

The 2016 Western Wall agreement was raised as part of a broader update Shai gave on his work, which is focused on strengthening ties between global Jewry and Israel. Israel’s recently passed state budget doubled his ministry’s budget, including funding earmarked for non-Orthodox groups. Prayer arrangements at the Western Wall, and ensuring the rights of non-Orthodox groups, have historically been of interest to American Jewish leaders, especially non-Orthodox leaders frustrated with the Orthodox control of religious affairs in Israel

Shai is in the United States to speak at the annual conference of the Israeli-American Council, which begins Thursday. Shai said one of his top priorities is engaging Israelis living in America — regardless of whether they’re thinking of moving back.

“We have to open channels of communication between them and us,” he said. “They may decide what they would like to do in the future, whether to live in this country or to return to Israel. It’s their choice. I don’t interfere, but the very fact [is] that hundreds of thousands of them live in this country, and finally, there are organized.”

Shai also said that he feels Israelis need to take more of an interest in Diaspora Jews, after a history of disregarding the experiences of Jews outside of Israel.

“We don’t teach the Diaspora in school, we were ashamed of the Diaspora for many years,” he said. “We tried to cut the roots of the Jewish people: You live in the diaspora, you did not belong to us. We built a new Jew, we built a new state, we built a new language. It’s all true, but still, there’s no present without [the] past, and there’s no future without the present. So it’s time to learn the roots, and it’s time to learn [about] Jewish communities all around the globe.”

The non-Orthodox prayer space, a compromise that would allow, for example, women to pray with a Torah scroll without harassment from Orthodox authorities, has been a hot-button issue in Israeli politics for years. In 2016, Netanyahu brokered the compromise that would have expanded the non-Orthodox section, which is to the south of the main, Orthodox-controlled plaza, and created a shared entrance for both areas. In 2017, he suspended the compromise under pressure from his haredi Orthodox allies.

The current government does not include haredi Orthodox parties.