Did You Hear the One about the Jew at the Neo-Nazi Meeting? 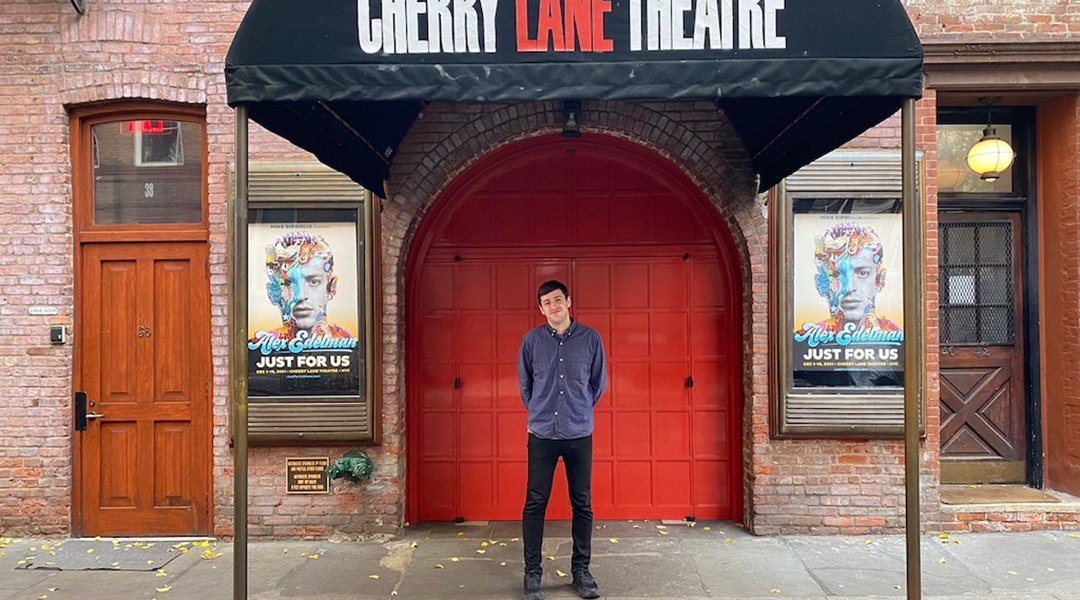 (JTA) — “Are Jews white people?” It’s a question that always bored me a little, whether asked in academic studies, magazine essays or Twitter threads. As an Ashkenazi male growing up in the United Sates, I always felt the answer was obvious: Yes. For Jews who present as white, their skin tone and easy entree into the professional class is a golden ticket that allows them to enjoy the privileges of the “host” culture as few Jews in history have ever done. The persistence of antisemitism doesn’t change that, and insisting otherwise is a form of special pleading.

I was shaken from this rigid stance after seeing, well, a comedy show, written by and starring the comedian and writer Alex Edelman. “Just for Us,” extended through Jan. 8 at New York’s Cherry Lane Theatre before hitting pause due to COVID, is a smart exploration of Jewishness and whiteness that goes down easy thanks to gorilla jokes, great puns and a young comedian’s willingness to expose his own needy personality.

Raised in an Orthodox family, Edelman made a name for himself in recent years by goading antisemites on Twitter, as he explained to my colleague Ben Sales. At the center of the show is what happened after he answered an open invitation to a meeting of white nationalists at an apartment in Queens. Around this set piece he weaves stories of his growing up attending Boston’s Maimonides School, his family’s hilarious and poignant confrontation with Christmas, and the strange but true story of how his brother represented Israel in the winter Olympics.

All the digressions worry a central point: Despite their apparent whiteness, Jews can’t fully shed their “otherness” in an America that still harbors deeply racist and prejudiced fringe elements. And despite smug assurances from the likes of me, Orthodox Jews especially experience that otherness in ways that deeply assimilated white Jews couldn’t begin to.

Edelman explains that he grew up in a racist part of Boston called “Boston,” and found himself early on wanting to be accepted as white — a grouping that included the city’s Irish, Italians and, at the top of the heap, WASPs. His yarmulke and the tongue-twisting Hebrew name he used at home and school were reminders of how he fell short, even if his father was on faculty at Harvard Medical School.

His night with what he calls “Nerf Nazis” is an experiment in empathy, and a test of whether — weirdly, he confesses — he can somehow connect with this group of aggrieved racists. As a friend tells him, there was no better proof that he enjoyed white privilege than the fact that he showed up at a white supremacist meeting and felt everything would be okay.

Those white supremacists, meanwhile, are adamant that there is no such thing as white privilege — if anything, their extremism is fueled by the idea that the white race is fast being supplanted by foreign elements, and that this “replacement” is being aided and abetted by Jews.

Edelman makes much of his “Jewiness” in the show, footnoting his insider material for the benefit of the non-Jews in the audience. There are plenty of Jewish comedians, and plenty of them play on familiar Jewish stereotypes. What’s vital to his story, however, is his Orthodoxy, which didn’t just shape his beliefs and moral code, but landed him in a distinct counterculture. The young Alex isn’t just an outsider among gentiles, he is an outlier among other, more assimilated Jews who have made peace with what they have given up to “pass” as part of the mainstream.

If all this sounds terribly academic, it isn’t. “Just for Us” is not a TED talk but a comedy show. Edelman is an adept practitioner whose trademarks include long, teasing pauses and switching from an inside voice to a shout when he moves towards an exasperated punchline. His insights into Jewish life — like the vast gulf between Christmas and Hanukkah — are smart and knowing. He has a throwaway line about Jared Kushner, who sits near him at their Upper East Side synagogue, that is priceless.

But the show shifts into a higher gear thanks to its main premise. His night with the neo-Nazis combines participant journalism and cringe comedy, and is deeply insightful about the ways Jews fit into the conspiratorial thinking of self-pitying bigots. You come away with a better understanding of both Jews and racists. It’s the rare night of comedy that made me rethink my own beliefs, and consider how “whiteness” is much more than skin deep.