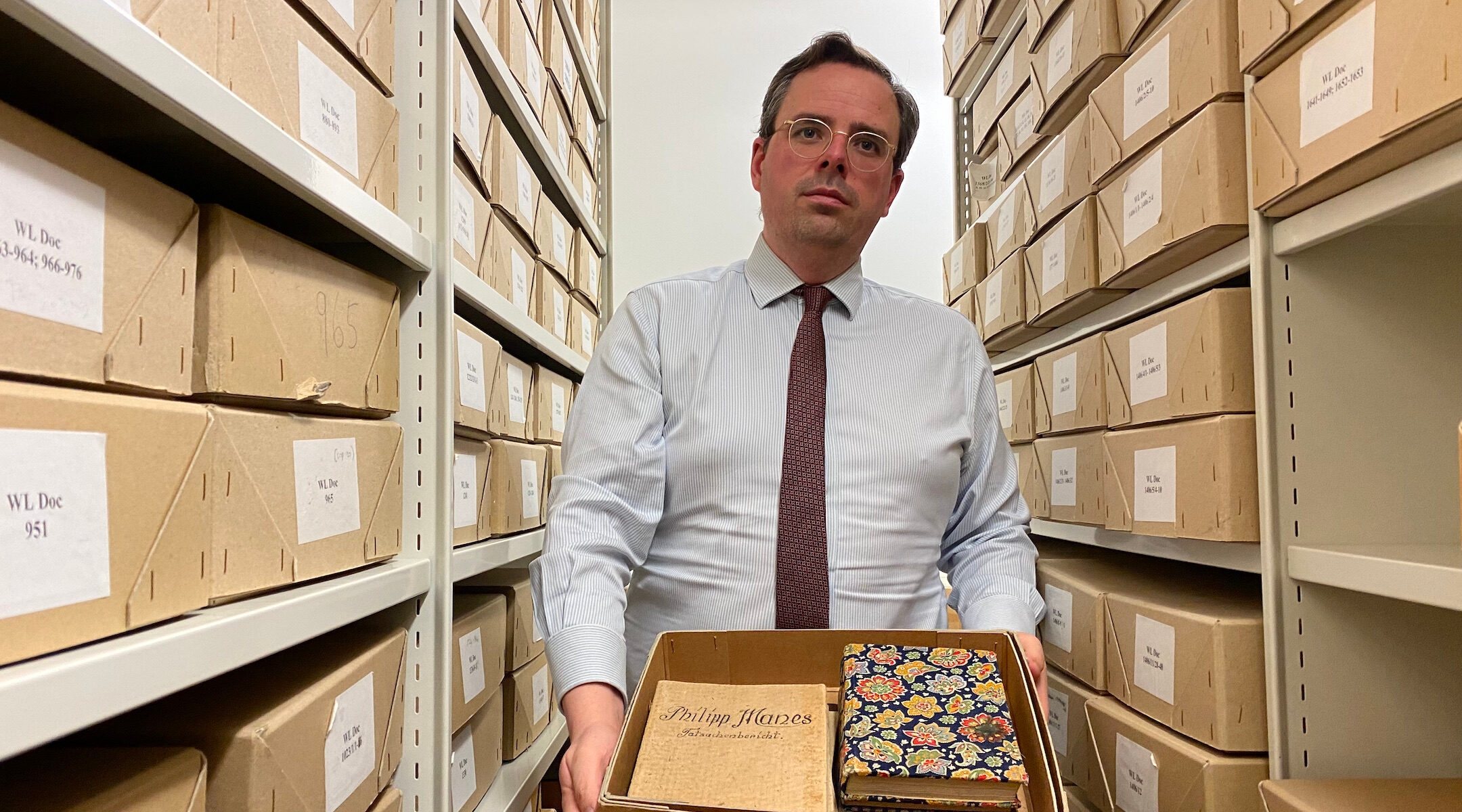 LONDON (JTA) — There are two sketches of Philipp Manes, a leading early-20th-century German-Jewish businessman, in the notebooks that he kept with him during his two-year imprisonment at the Theresienstadt transit camp.

Both are drawn shortly before Manes was deported to Auschwitz in October 1944, and could not be more different. One portrait shows Manes as an old man with tired eyes and sagging skin. The other models him as a heroic Goethe-like figure, with an accompanying dedication that describes him as “the cultural pioneer of Theresienstadt.”

That’s because during the difficult years that Manes spent at Theresienstadt, he became the fulcrum of an unlikely cultural flowering of dozens of Jewish intellectuals. Manes hosted over 500 lectures, plays, and musical performances, bringing together many of Europe’s best and brightest Jews for brief moments of normalcy in the ghetto.

His notebooks, which offer rare insight into lived Holocaust life, are just some of the over one million documents held in London’s Wiener Library, the world’s oldest Holocaust archive.

“These are completely unique documents,” said Toby Simpson, the library’s director, as he leafed through the pages of one of Manes’ bright floral fabric notebooks.

Simpson had meandered through the Wiener’s archive and wheeled apart two metal shelves in the basement of the archive’s narrow building. It sits tucked between two other brick buildings in central London’s busy Russell Square, almost hidden to most passersby.

The shelves part like the Red Sea to reveal stacks upon stacks of neatly filed and coded boxes that chart in meticulous detail the rise of antisemitism in Germany from the 1920s onward, and its tragic aftermath. 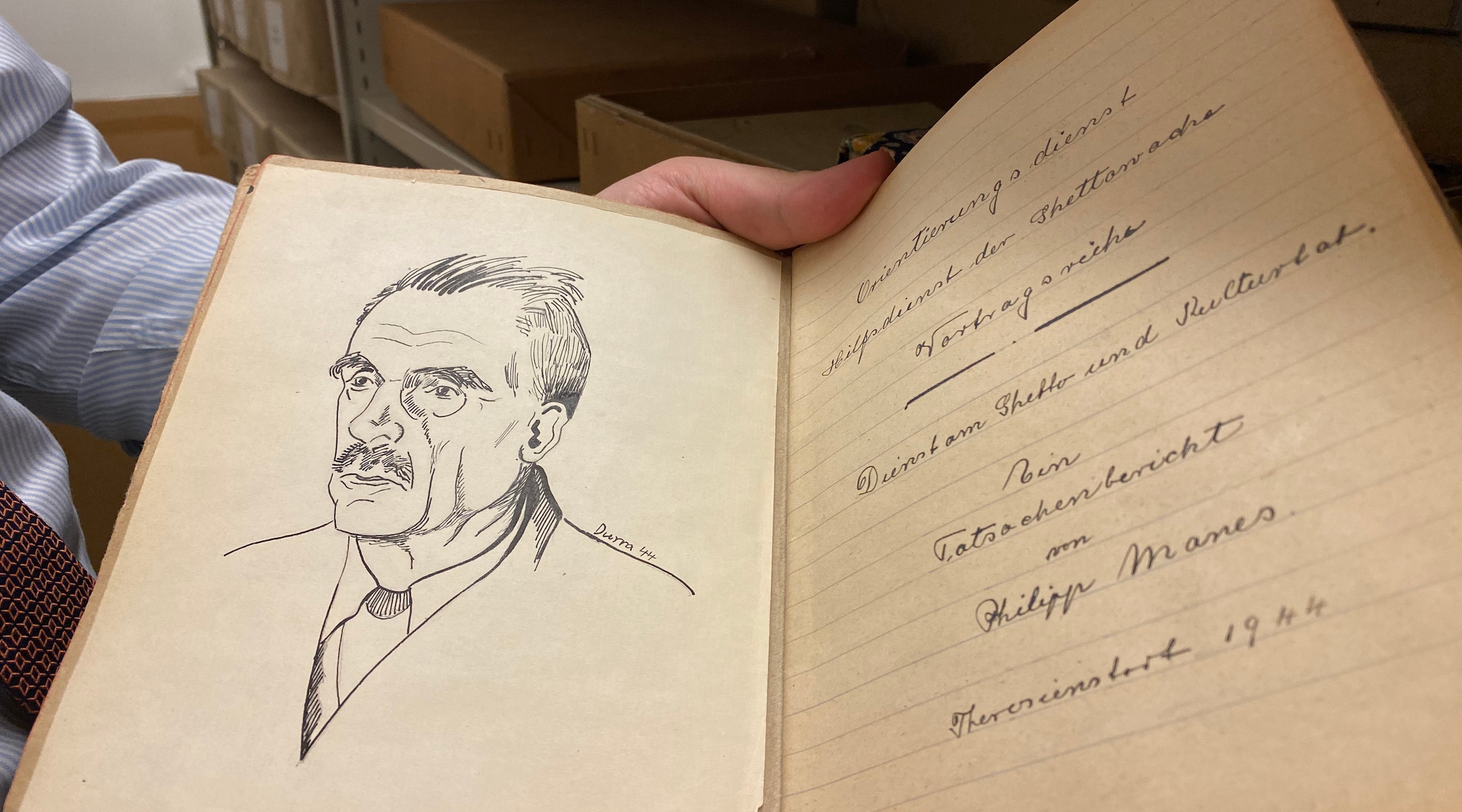 One of the sketches of Philip Manes. (Jacob Judah)

Founded as the Jewish Central Information Office in 1933, which itself grew out of an earlier bureau that Alfred Wiener had operated in 1920s Berlin, the institute was established to monitor German antisemitism. Much of the collection was gathered before and during the Holocaust.

The thousands of newspapers, pamphlets, photos, and other documents that were compiled speak to what the researchers and refugees who staffed the institute felt was important to keep, without the benefit of hindsight that characterizes many other Holocaust collections.

“It has an evolving character, because of this,” says Simpson. “It is unique to the library that it evolved during the Holocaust and before it.”

Wiener, a trained Arabist and decorated First World War veteran, had become concerned at the antisemitic conspiracies that were swirling around post-WWI Germany, and threw himself into efforts to monitor and combat Germany’s far-right underground.

His first pamphlet, “Prelude to Pogroms,” was published in 1919 and warned — prophetically — that far-right and militarist sects of German society were being entranced by the idea of orchestrated violence against Germany’s Jews.

He began collecting pamphlets, books, and leaflets in an effort to track German ultranationalists, and opened an office under the main representative body of German Jews. By the mid-1920s, he was publicly debating German nationalists — both in print and in public debates — and in 1925 authored a critique of Hitler’s “Mein Kampf.”

By the time Hitler came to power in 1933, it was not safe for Wiener to remain in Germany. He moved his operations to Amsterdam, from where his staff established a network that could provide information on Jewish life across the Third Reich.

“By the time that Hitler came to power, they were quite sophisticated in understanding what had to be kept,” Simpson said. “They were quite innovative, for example, in collecting newspaper clippings, far-right ephemera and pamphlets.”

“These are things that often weren’t kept by others and were lost in other collections,” Simpson added.

Typical of Weiner’s work is an unusual booklet produced in 1935 by a refugee Jewish couple that traveled by car through Germany to take photos of antisemitic road signs.

The photos, which were presented and distributed at an event in Amsterdam in 1935, paint a disturbing picture of Germany’s Nazification.

“Jews are not welcome here!” screams one sign. “Fraternization with Jews leads to exclusion from the village community,” reads another on the outskirts of a small village. Kristallnacht, however, changed everything.

Eyewitness accounts poured into Wiener’s Amsterdam office from Jews across Germany and Austria. Researchers, many of whom had fled with Wiener in 1933, began collecting testimonies — 305 of which remain in the museum’s collection — that were stored and fed into urgent reports which were sent to politicians and newspapers around the world.

“When you encounter many of the documents here,” Simpson adds, “There is often a sense of surprise, panic, or doubt, that comes through the documents themselves.”

In 1939, reading the tea leaves, Wiener moved the archive to London, where he had built close ties with the British Jewish community.

Throughout the war, Wiener and his colleagues forensically gathered information from Germany and Nazi-occupied Europe. They published a fortnightly digest of information picked up from trusted informants, escapees and newspapers across Europe, which began to piece together the systematic destruction of Europe’s Jewish communities.

In one edition of “Jewish News,” an early warning signal picked up from the Jewish Telegraphic Agency correspondent in London noted that Polish exiles in London had picked up reports of the “concentration camps of Oswiecim.”

Oswiecim, which was reported to have only “15,000 prisoners,” would later become better known under its German name — Auschwitz.

“I think sometimes people have a misconception that nobody knew anything until the end, and that it was only on the British liberation of [the] Belsen [concentration camp] that it was fully realized what had happened,” said Barbara Warnock, the library’s education manager. “We’ve got everything to show that certain things were coming through to people in Britain about the Holocaust as it unfolded.” 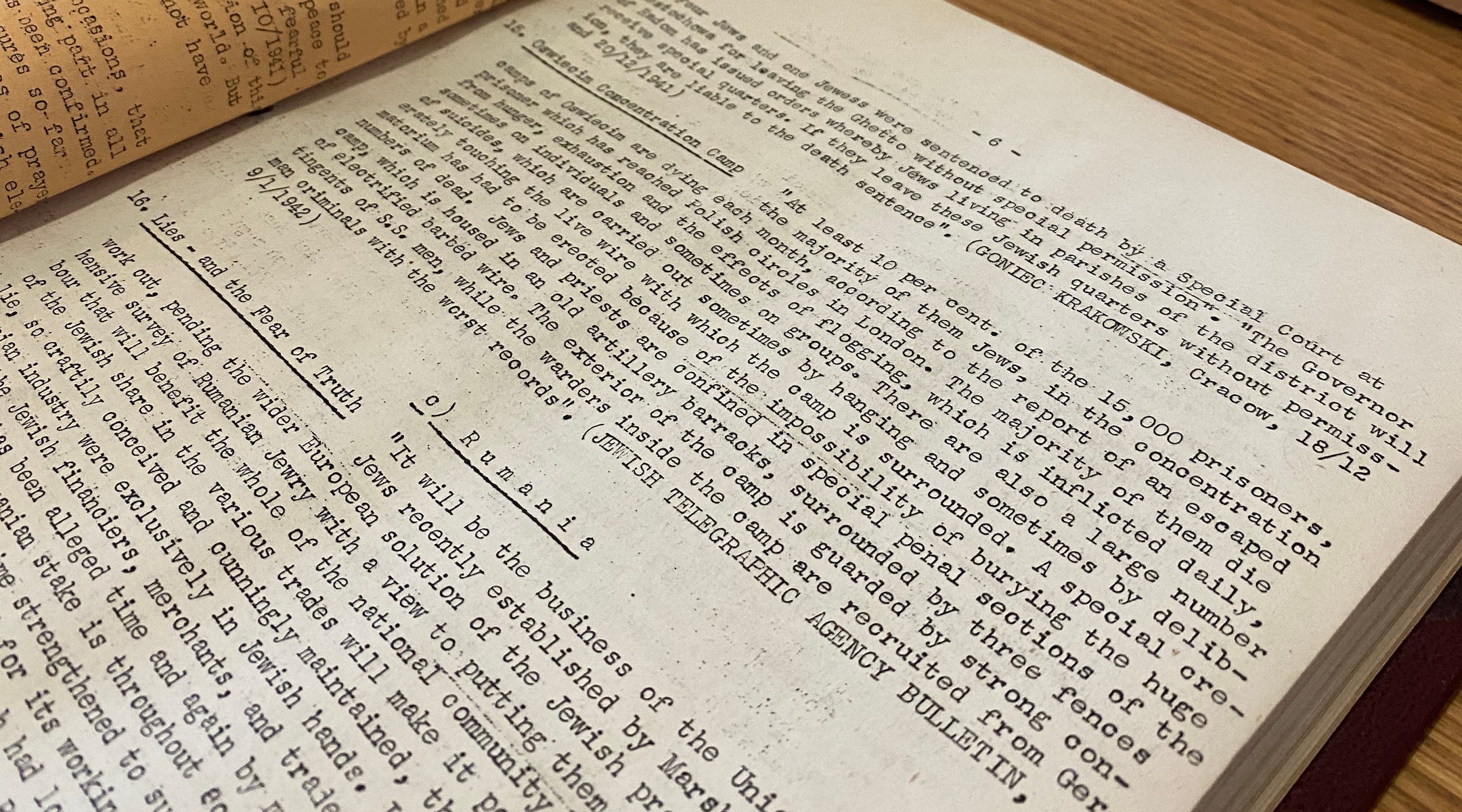 A Jewish Telegraphic Agency bulletin brief contains some of the first reporting on the “concentration camps of Oswiecim,” which would later become known as Auschwitz. (Jacob Judah)

The information that was gathered by Wiener and his associates before and during the Second World War formed part of the evidence that was submitted at postwar trials, including Nuremberg and Adolf Eichmann’s sitting in Jerusalem in 1961.

Over 1,000 testimonies were collected, ensuring that voices and memories that were generally not committed to paper elsewhere have been preserved.

“You get experiences from people who were older,” Warnock said. “They are also different from many of the immediate postwar accounts, which were often given in a judicial context at trials, or in a context that was influenced by local circumstances.”

Even as the Holocaust recedes in time, the library’s efforts to gather information have only stepped up.

“We are approached still every week with donations,” Warnock said.

Increasingly, however, the library has sought to become a center for both educating about the Holocaust and warning about antisemitism, genocide and fascism.

An affiliate website, The Holocaust Explained, received over two million unique views from 200 countries across the world in 2021, making it one of the most popular Holocaust education websites globally.

Exhibitions, lectures and conferences are also regularly hosted, illustrating the latest in historical research on the Holocaust done with the help of the Wiener’s treasure trove of documents.

A glance into the reading room, which is home to a slice of the 85,000 books the library possesses, gives an indication at the importance for historians of the Wiener’s material. Researchers puzzle over documents brought up from the basement below.

Outside, students from the neighboring School of African and Oriental Studies — one of central London’s four main universities — buzz up and down outside.

The Wiener Library’s staff, which have developed a reputation as friendly and supportive among researchers, offer guidance to younger academics through talks, advice and workshops, such as the weekly “PhD and a Cup of Tea.” 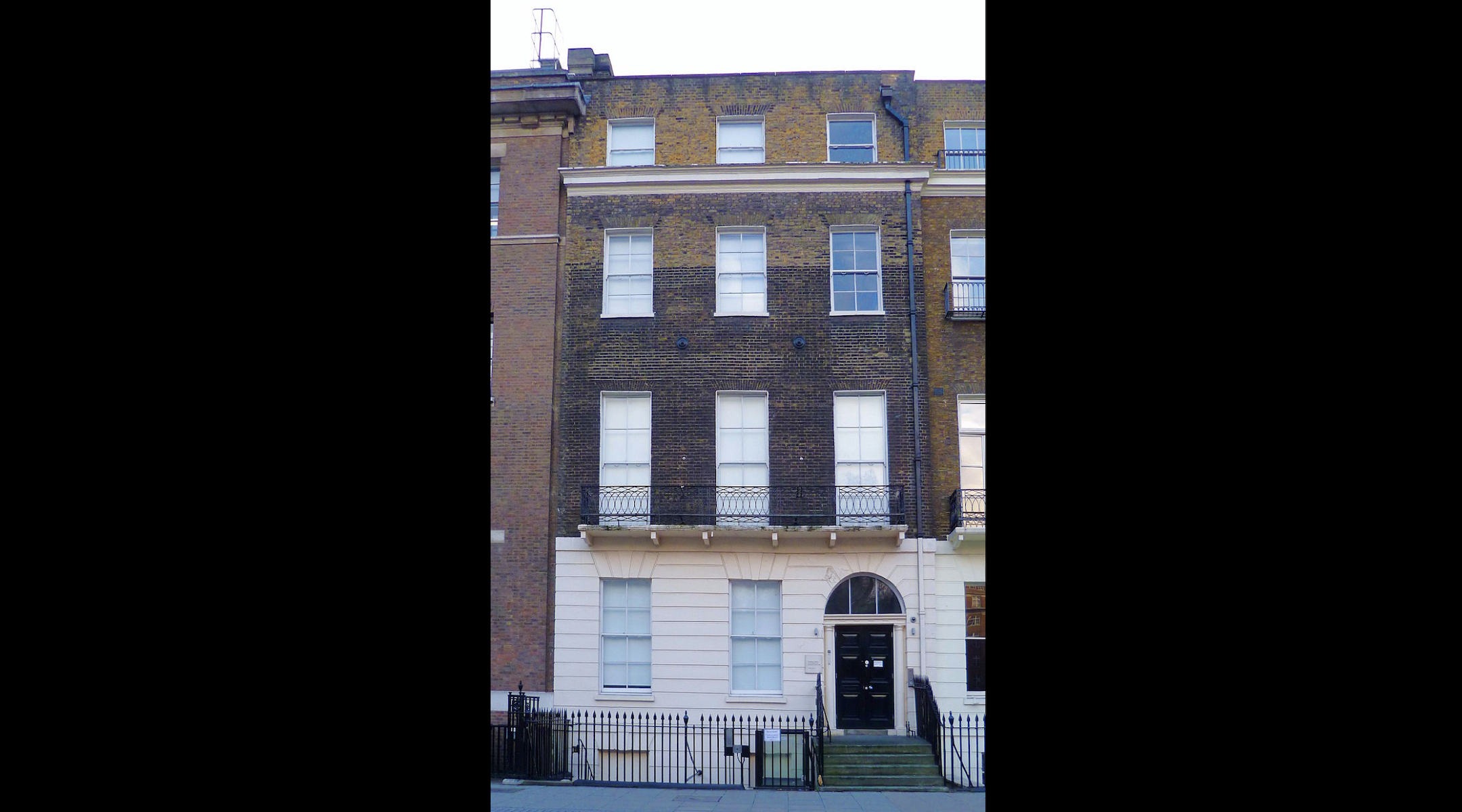 The library has also offered itself as a home to documents and evidence from other genocides. In recent years it has received documents on ISIS’ persecution of the Yazidi ethnic group in Iraq and Syria, on human rights abuses in Myanmar and on crimes against humanity in Darfur — all of which have been submitted as evidence at international tribunals.

The library also occasionally issues statements warning on contemporary issues that it considers close to home, and works closely with anti-fascist organizations in Britain, including Hope, Not Hate. It has sought to raise the alarm about the persecution of the Uyghurs in China, and on antisemitic and far-right activities in Britain.

“We like to think of ourselves as a toolkit for others,” Simpson said. “We see ourselves as part of an effort to confront Holocaust denial and challenge prejudice everywhere. We recognize what we’re good at — that is supplying others with the tools that they need to do just that.”

“Alfred Wiener and the founders of the institution saw themselves as part of a struggle,” he added. “We come from the same place and recognize that now there will be others better placed than us to be on the frontline — to be out there challenging fascists for example.”