An Iranian Jewish leader was executed in 1979. His granddaughter wants his story known. 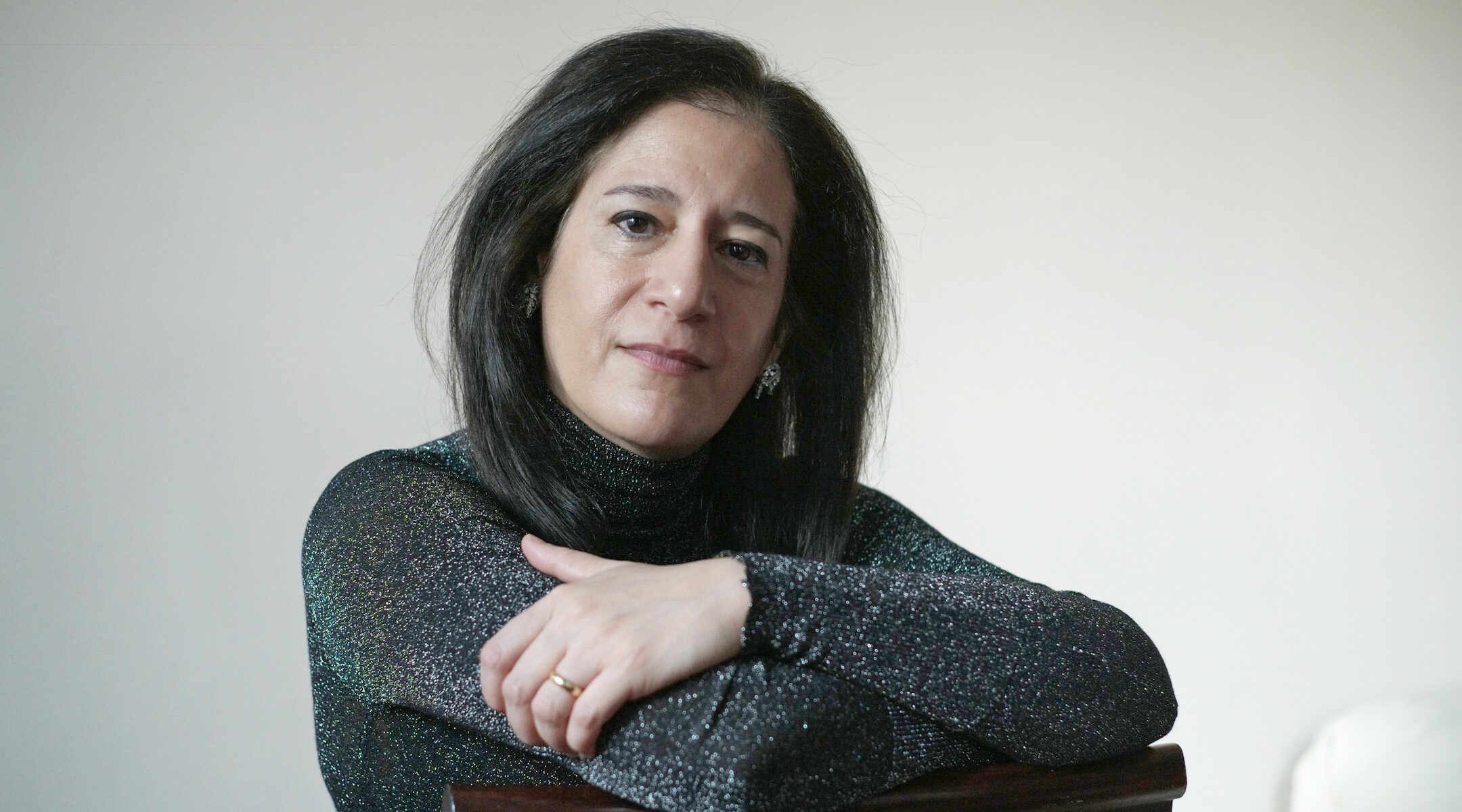 (JTA) — As a news photo editor currently with NBC News, Shahrzad Elghanayan has worked with many photojournalists whose instinct is to run toward danger. It is, she said, “a sign of courage, empathy, and feeling responsible for your fellow human beings.”

That instinct is part of what connects Elghanayan with her grandfather, Tehran businessman Habib Elghanian, who was the head of the Jewish Association of Iran until soon before he was executed during the country’s Islamic revolution in 1979. There were so many times when Habib, at the time Iran’s most prominent secular Jewish leader, could have saved himself – but chose instead to stay in Iran helping Jews.

“He stayed there to protect the Jewish community he had led since 1959 and what he had built from scratch,” Elghanayan said. “I can understand that.”

In her book “Titan of Tehran: From Jewish Ghetto to Corporate Colossus to Firing Squad — My Grandfather’s Life,” published by the Associated Press in November, Elghanayan not only researched her grandfather’s death, but also celebrated his life.

Get Jewish stories from around the world in your inbox.

As a business “titan” who, with his brothers, headed a conglomerate that made plastics, refrigerators, stoves and aluminum, among other goods, Habib was an instrumental figure in pre-revolutionary Iran’s modernization. (In 1962, the brothers built Iran’s tallest private sector high-rise at the time, the Plasco Building.) As a Jew, he benefited from a brief atmosphere of tolerance, albeit with limits, under the shah.

In fact, Elghanayan’s grandfather’s lifetime coincided with a “golden era” for Iran’s Jews, she told the Jewish Telegraphic Agency. But in the end, Habib suffered an ending that seems familiar to Jews in many nations at many times in history — scapegoated and executed for perceived secret loyalties to Israel.

Elghanayan was 7 years old on May 8, 1979, when her grandfather was killed on trumped-up charges of spying for Israel. She and her family had left Iran for the safety of the United States the previous September. Still in her possession is a commemorative coin depicting the shah on one side and a menorah on the other. It was meant to commemorate Jews’ acceptance in Iran, and Habib had contributed $40,000 for its issue.

That was how Habib felt, like two sides of the same coin: Iranian and Jewish.

“How he felt and how he was seen are two different things,” Elghanayan said. “He was Iranian and Jewish like I’m American and Jewish. No one can take that away from us.” 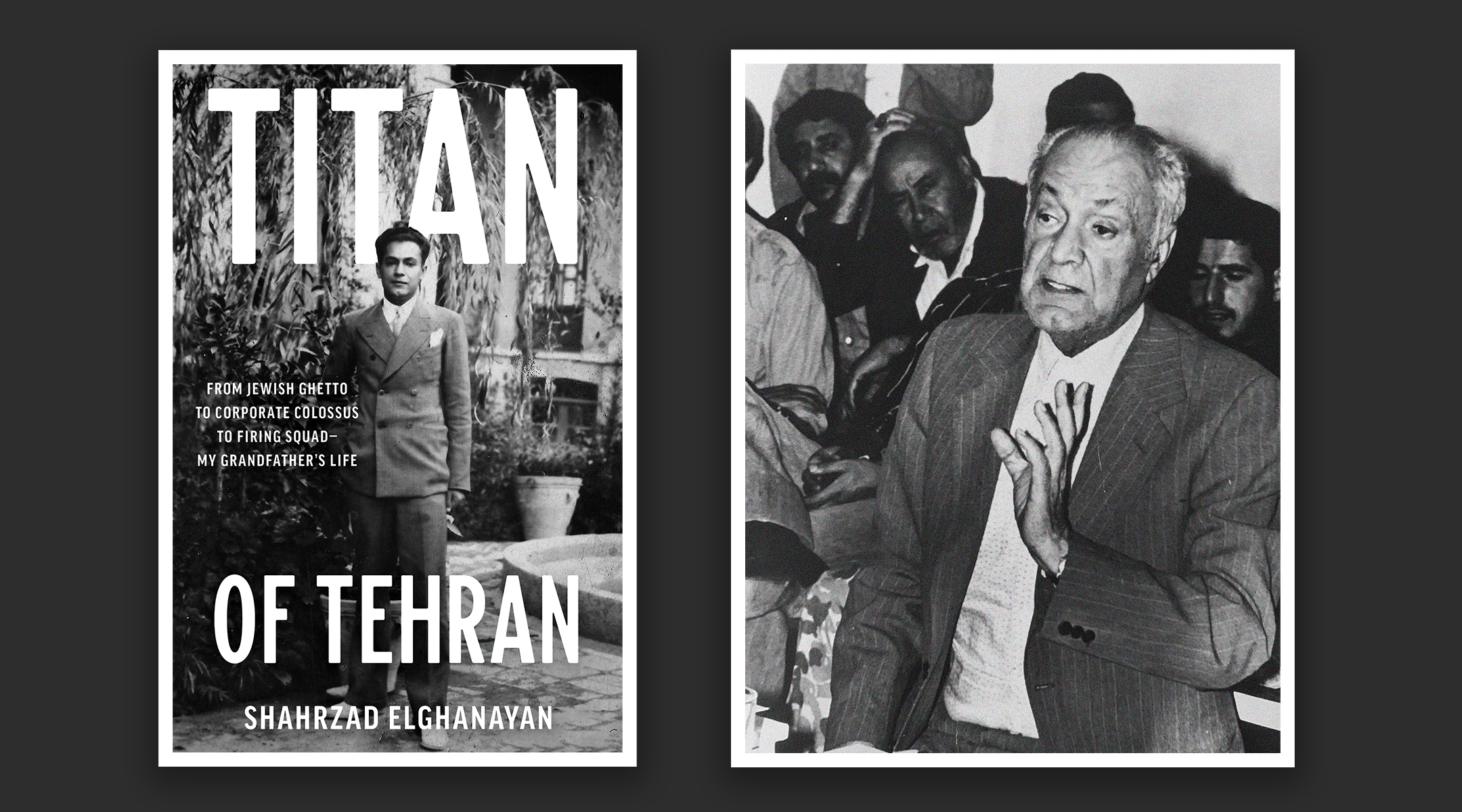 Left: The book cover of “Titan of Tehran.” Right: Habib Elghanian, a prominent leader of Iran’s Jewish community, seen during his trial in Iran that led to his 1979 execution. (Collage by Grace Yagel/JTA)

Yet Elghanayan discovered that as early as 1964, Habib was known to the future Ayatollah Ruhollah Khomeini, who had issued a veiled threat to the Jewish leader in a speech.

“He made clear in his speech against Iran’s modernization efforts that in the country he would rule, there would be no place for a successful Jewish businessman,” Elghanayan said. “Khomeini didn’t consider my grandfather Iranian. It’s that old antisemitic trope of dual allegiances, except that for Khomeini, it wasn’t even a dual allegiance. It was an allegiance only to Israel.”

In the end, that was the charge that led to Habib’s execution in front of a firing squad.

The scapegoating of Jews, and Habib in particular, was not the sole pastime of Islamic revolutionaries. The shah had arrested Habib as well. And while Elghanayan does not blame the shah for her grandfather’s eventual execution, she said he was responsible for creating an environment that made a revolution possible.

“One ineffective totalitarian regime was replaced by a different oppressive government,” she said. “The old one, supposedly friends of the Jews, had secret service files about my grandfather’s trips to Israel when it was perfectly legal for him to be there. The shah also scapegoated my grandfather and other businessmen for inflation because the shah didn’t know how to fix Iran’s overheated economy.”

Habib did have strong ties to Israel and helped many Iranian Jews move there, with the assistance of the Magbit, an Israeli organization that raises money to support immigration to the country. He and other Iranian Jewish leaders undertook a Magbit-organized trip to Israel in 1974, the details of which wound up in the secret dossier on Habib maintained by the shah’s secret police.

“He was helping Iranian Jews make aliyah long before the revolution, but my research didn’t indicate that that was because he thought Iran wasn’t safe for them,” Elghanayan said. “He thought Israel was a great development in the history of Jews. In fact, when he went to Israel, the Magbit was not satisfied with the number of Jews immigrating to Israel from Iran.”

As for Habib himself, Elghanayan said he had on “noise-canceling headphones” as the revolution was underway. But, she said, it wasn’t all about refusing to believe he was in danger. Habib wanted to be where he could help his people the most.

“He was the leader of the Jews, and hearing that the situation was dangerous for them in 1979, he wasn’t going to watch them get hurt from the outside,” she said.

But Habib did send his son, Elghanayan’s father, to America in the mid-1950s. Elghanayan writes that she was “mystified” as to why Habib would “uproot his own son and send him to America” when he wouldn’t go there himself, but she offered some guesses.

“By then, he was already very attached to Iran, where Jews had deep roots for millennia,” she said. “He and his brother Davoud were heavily involved in philanthropy to support Iran’s Jews. He had also established roots in the bazaar since 1936, when he had his own business before partnering with his brothers. He had also built a good lifestyle for himself.”

As for whether her grandfather’s story should be interpreted as a cautionary tale for Jews who rise to great success anywhere in the Diaspora, Elghanayan said that’s beyond the scope of her research.

“I wrote this book to inform people and didn’t want a piece of history to be lost,” she said. “In general, it’s important for watchdog groups and journalists to document antisemitic acts around the world and keep track. A free press helps expose and see reality as it is.”

But this is not just a “piece of history” to the author. It’s very personal.

“It’s traumatic to think that he was alone during his trial, couldn’t say goodbye to anyone before his execution and that my father had to find out about it on the radio in New York,” she said. “I cried a lot while I wrote this book, but I knew I was rebuilding something that was destroyed so that it would never be forgotten.”

In publishing a book about her grandfather’s treatment at the hands of Iran, Elghanayan hoped to bring his accomplishments back to life.

“As much as the book is about the events that led to his execution, it’s also a celebration of his life and something that bullets can’t destroy,” she said. “He was alone then, but now his story will live in readers’ homes and hearts.”