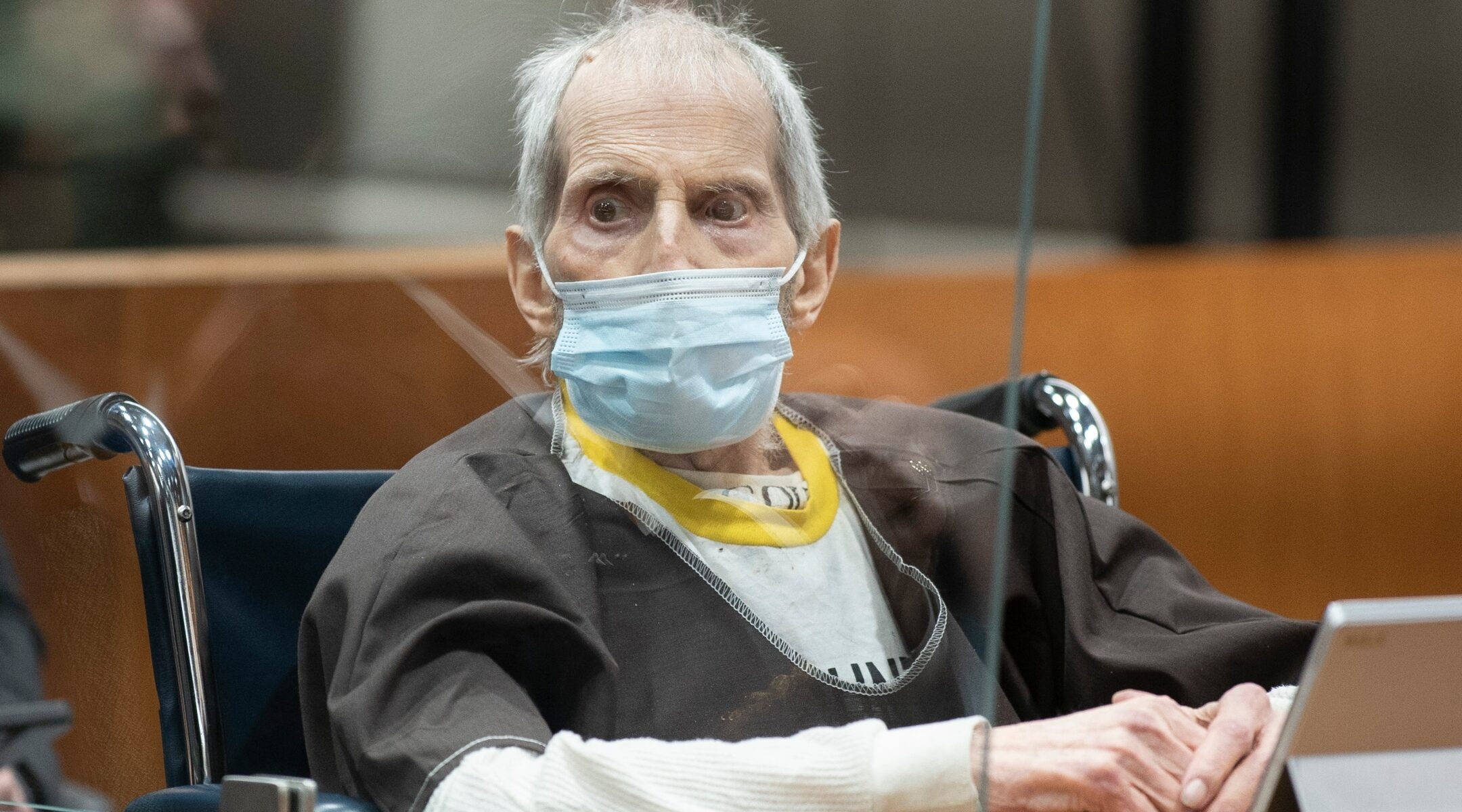 (JTA) — When Robert Durst met Susan Berman at UCLA in the late 1960s, they had at least three things in common: They were Jewish, their mothers were dead and their fathers were connected, Durst’s to New York’s high society and Berman’s to the Vegas mob.

On Dec. 23, 2000, in Los Angeles, Durst ended the friendship with Berman with a bullet through the back of his best friend’s head.

Durst died on Monday, 78, in a California hospital, as a prisoner serving a life sentence for murdering Berman. He was convicted in September, more than 20 years after the murder.

Durst’s death brought to an end the sordid life of the scion of a billionaire real estate clan so estranged from his family that his brother testified against him at the trial.

He was not only suspected of murdering his wife, Kathie McCormack Durst, in 1982, but he confessed to the shooting and beheading of a neighbor in Galveston, Texas, in 2001, when Durst was on the run as a suspect in the Berman killing and disguised as a mute woman. In that case, Durst argued that he had acted in self-defense and was acquitted.

Durst’s exploits — and seeming ability to evade the law — was fodder for Hollywood, once in fictional treatment starring Ryan Gosling, “All Good Things,” in 2010, and in 2015, in “The Jinx: The Life and Deaths of Robert Durst,” an HBO documentary.

His agreement to cooperate with the documentary makers led to his downfall.

His friendship with Berman had been extraordinarily close: Berman became Durst’s spokesman and was his fiercest defender against suspicions that he had murdered his wife. He gave her away at her wedding in 1984. Berman was obsessed with the career of her father, a mobster tied to Meyer Lansky and Bugsy Siegel.

They embarked on ventures together, although at times he turned her down, like when she pitched him a Broadway musical based on the Dreyfus affair, the story of the Jewish French officer who was falsely accused of treason at the turn of the 20th century.

After Berman was murdered, police received an anonymous note, saying “CADAVER,” with her address on it. Police found her in her house, face down, a pool of blood around her head patterned with her terriers’ paw prints.

The HBO filmmakers confronted Durst with testimony from a handwriting expert who said that Durst had written the note. Rattled and still hooked up to a microphone, he retreated to a bathroom, where he said, “What the hell did I do? Killed them all, of course.”

Authorities had not charged Durst for Berman’s murder for lack of evidence. His confession now a matter of televised record, Durst was arrested just before the screening of the final episode of “The Jinx” (he said he enjoyed the series).

Serving time for a separate charge of illegal possession of a gun, Durst finally went to trial after years of delays — some due to the pandemic — late last year. At his trial, a close friend of Durst’s testified that Durst had told him in 2014 that he had killed her because he feared she would turn him in for his wife’s murder.

Soon after he was sentenced to life in prison in October, he was diagnosed with COVID-19. He was in the hospital for tests when he went into cardiac arrest and did not recover.

He had been jailed before. Durst went on a cross-country run in October 2001 after killing his neighbor in Galveston. Police caught up with him in Pennsylvania on Nov. 30. He had just stolen a chicken salad sandwich from a Wegmans grocery store.

Weeks earlier, Vanity Fair reported not long after his arrest, police had searched an apartment he kept in New Orleans. They found a wig on a styrofoam head and a medallion. On it was inscribed the name, “Dave Berman,” Susan Berman’s mobbed-up dad.

She had left it to Durst in her will.