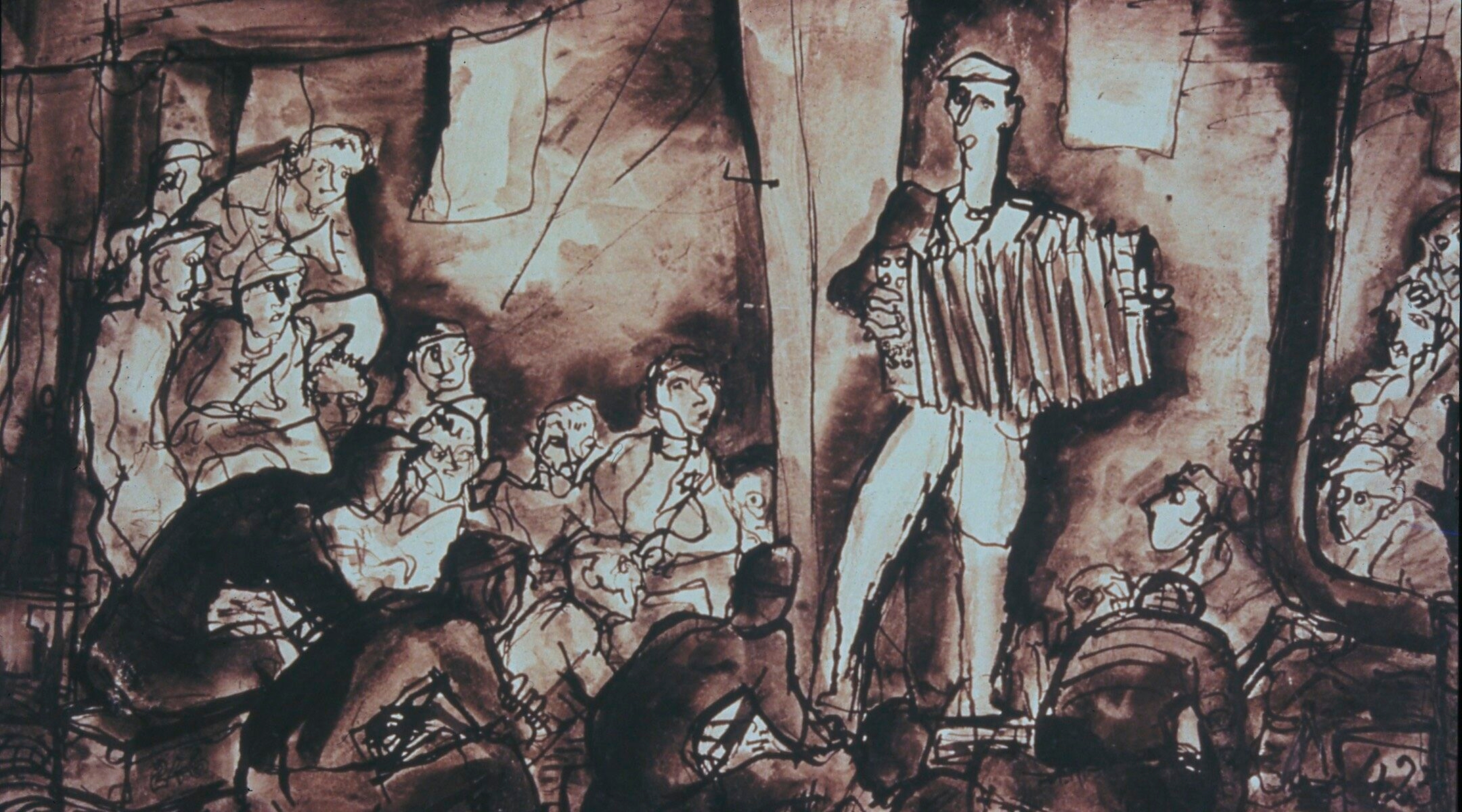 Detail from "Entertainment," a drawing of the Terezín concentration camp by Bedřich Fritta, from 1943. Collection of Thomas Fritta Haas. ("Our Will to Live" by Mark Ludwig, published by Steidl)
Advertisement

(JTA) — Over the past several decades, the Terezín concentration camp has come to be synonymous with the music of the Holocaust because of the number of performers who were imprisoned there.

Now, in the latest production associated with a foundation devoted to preserving the camp’s legacy, a new book reveals how one prominent musician thought about music at the camp at the time, offering fresh insights about the complicated nature of life in Terezín.

Austrian composer Viktor Ullmann came from a Jewish family and studied under the storied Jewish composer Arnold Schoenberg, who fled the Nazis in 1933. The Nazis deported him to Terezín, known as Theresienstadt under their rule, in 1942.

While incarcerated there, Ullmann wrote a series of essays on musical life, painting a portrait of a vibrant artistic scene in the depths of an oppressive ghetto and offering his views on the works composed at the camp. In 1944, after producing a camp opera satirizing Hitler, Ullman was murdered at Auschwitz, where tens of thousands of his fellow Terezín prisoners died.

Ullman’s perspective is preserved in “Our Will to Live,” a new compilation of his critiques edited by Mark Ludwig, a former violist with the Boston Symphony Orchestra and professor of Holocaust Music at Boston College. It was released by the high-end German art book publisher Steidl on Tuesday.

“Ullmann is like our Virgil, taking us back into Terezín by virtue of his critiques,” Ludwig told the Jewish Telegraphic Agency.

Life in Terezín was as brutal as any other concentration camp. Food was scarce, overcrowding was rampant, and disease spread rapidly. Out of the 141,000 prisoners in Terezín, 90,000 were sent to Treblinka and Auschwitz where they were murdered.

But Terezín was also a major part of the Nazis’ propaganda machine and they went to great lengths to make the camp appear luxurious. “Theresien-spa,” as the camp was informally called, appeared frequently in propaganda films and was the location of choice when international delegations came to inspect the camps. 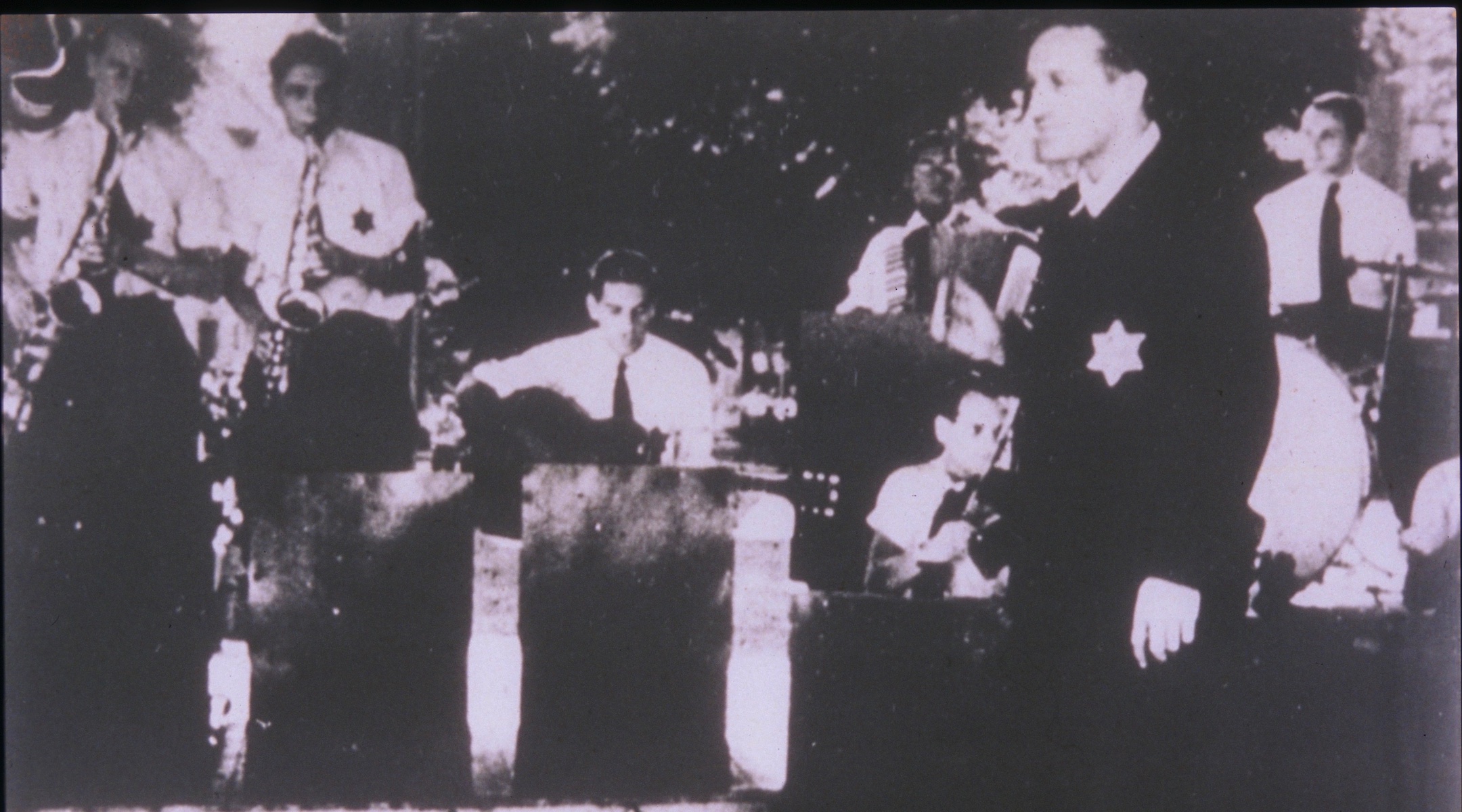 Detail from the Nazi propaganda film “Theresienstadt, A documentary Film from the Jewish Settlement Area,” shows The Ghetto Swingers performing with band leader Martin Roman. (“Our Will to Live” by Mark Ludwig, published by Steidl)

To aid that propaganda effort, the Nazis ensured that the Reich’s wealthiest and most famous Jews ended up in Terezín. At different points, its prisoners included Leo Baeck, the Berlin rabbi who would go on to lead the Reform movement; Dutch-Jewish artist Joseph Spier; and Alfred Flatow, the Jewish gymnast who represented Germany in the first Olympic Games.

Among the camp’s prisoners were dozens of musicians and composers from across Europe. Using instruments smuggled into the camp, they formed choirs, cabarets, and other musical groups, who then performed for their fellow prisoners — and, at opportune moments for their Nazi captors, for guests like the Red Cross.

To Ullmann, the austere conditions in Terezín were not barriers to production but an opportunity to focus on producing art. By imprisoning some of Europe’s finest artists and musicians together in the same camp, the Nazis had unknowingly created a conservatory of sorts, a “true school for masters” as Ullmann called it.

“I would only like to emphasize that my musical work was fostered and not inhibited by Theresienstadt,” he wrote.

“Our Will to Live” is the culmination of more than three decades of work by Ludwig’s Terezín Music Foundation, an organization dedicated to preserving the legacy of Terezín’s musicians. Since the 1990s, the Terezín Music Foundation has researched the works of these musicians and commissioned new performances of works by Ullmann and other Jewish prisoners at Terezín, including Pavel Haas and Hans Krása.

“For a number of these pieces we’re putting down the first recorded interpretation of the work,” Ludwig said. “That’s exciting, but it comes with its own sort of responsibilities.”

One of those responsibilities, Ludwig said, is ensuring that the audience understands the conditions of the work’s production. For “Our Will to Live,” Ludwig worked with largely Czech and Austrian Jewish survivors who either knew or attended performances by Ullmann in Terezín. Their insights are documented in extensive footnotes at the end of each critique.

Ludwig is not alone in his interest in the artists of Terezín. A host of other classical musicians including Japanese pianist Izumi Shimura and Italian pianist Francesco Lotoro have found themselves drawn to the music of the camp. In 2013, conductor John Axelrod revived one of Ullmann’s operas with the Kammersymphonie Berlin.

Where the Terezín Music Foundation stands apart is in its interdisciplinary approach, which is an attempt to evoke the atmosphere in the camps.

“At Terezín, the art and music were really intertwined,” says Jim Schantz, a painter who has worked with the foundation on several performances.

Commissioning visual artists to work with musicians on these performances brings out the original spirit of these works, Schantz added. One performance of a string quartet by composer Hans Krása featured Schantz in the background, painting in response to the music.

Similarly, for “Our Will to Live,” Ludwig paired Ullmann’s critiques with posters from the Heřman Collection, a collection of more than 500 items documenting cultural life in Terezín. A prisoner named Karel Heřman hid the documents in the walls of the camp’s barracks, recovering them after he was liberated from Auschwitz in 1945. The items in the collection range from sketches of Ullmann and his friends to posters for concerts in the camp and sheet music for the original compositions.

In recent years, the foundation has also commissioned more than 40 new works that build on the work of Terezín artists or are inspired by the same principles that guided these artists. It has also helped provide resources for musicians in war-torn communities in Syria and Bosnia.

By working on contemporary projects that preserve the spirit of perseverance and dedication to creating music under the most difficult conditions that animated musicians like Viktor Ullmann, Ludwig said he hopes to keep the memories of the Terezín artists alive.

“Perhaps that’s the ultimate homage to them,” he said. “Helping to uplift new voices of today and tomorrow.”