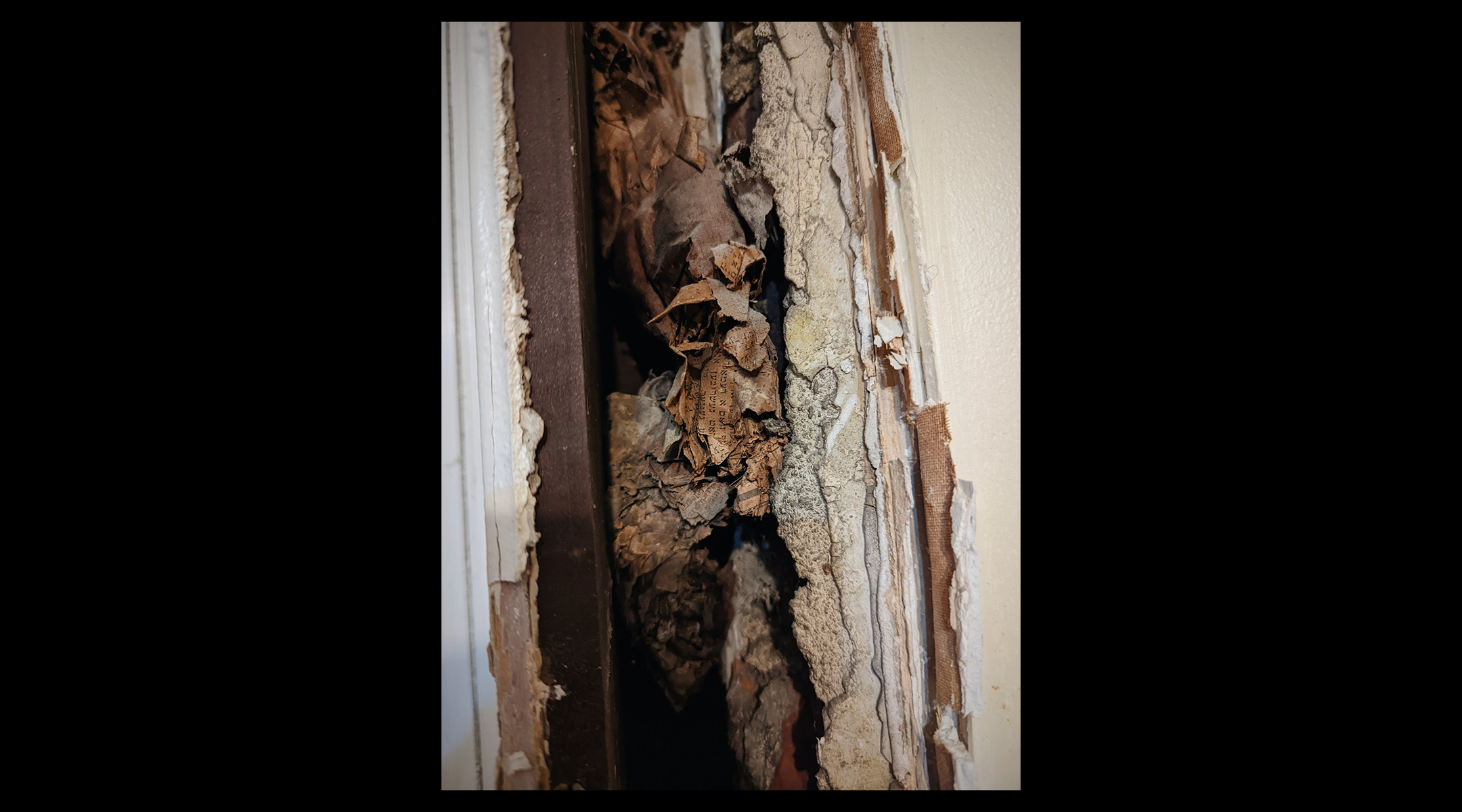 Rabbi Mordechai Lightstone, social media editor for Chabad.org and the founder of Techtribe, discovered during a recent renovation that his walls were insulated with Yiddish newspaper. (Courtesy)
Advertisement

(New York Jewish Week via JTA) — Mordechai Lightstone and his wife, Chana, are renovating their house in Brooklyn’s Crown Heights — removing walls in the living room, dining room and hallway — so they’ll have plenty of space for guests when they are able to start hosting visitors again.

Lightstone, 37 — who describes himself in his Twitter bio as the “Rabbi for the Extremely Online” — runs Techtribe, an affiliate of Chabad Young Professionals that serves as a gathering place for young Jews who work in tech and digital media. He and his family regularly host Shabbat meals and other events in their home.

After the contractors removed the framing around the windows earlier this month, Lightstone noticed some newspapers stuffed into the walls and in the cracks of the building. But Lightstone was busy — and the papers were so faded, yellowed and brittle — that he didn’t take a second look.

That was, until he was showed his son the latest renovations — and the 11-year-old noticed that the words were printed in Yiddish. It was a delightful surprise to Lightstone, who then used a spatula to pry the papers carefully out of the wall.

The newspapers were so aged that one of the pages disintegrated the moment he removed it from the wall, Lightstone said. It’s hard to make out most of the words, let alone any clues as to which Yiddish-language newspaper it was or what year it was published. But Lightstone was able to translate a few fragments, one of them saying, “all the Jews gather.” A photo of the fragments includes what appears to be the word “geshribn,” or “it is written.”

“The house itself was built in Crown Heights in around 1920 or so, so I’m guessing [the papers were] about a hundred years old,” Lightstone told The New York Jewish Week. In the 1920s, as many as 30 Yiddish newspapers and magazines were published in New York.

Lightstone, who has lived in the house since 2016, guessed that the newspapers were used for insulation, not an uncommon way to inexpensively insulate a house.

“I guess the previous owner took the Rebbe’s words very seriously…  בית מלא ספרים (a house full of books),” wrote one commenter on Twitter. He was referring to a popular teaching from the Lubavitcher Rebbe (Menachem Mendel Schneerson, the late leader of the Chabad movement), that it was a mitzvah to fill Jewish houses with Jewish books. Although Yiddish has faded as a Jewish lingua franca, it is still spoken by followers of Chabad and other haredi Orthodox movements.

This isn’t the first time Lightstone has lived in a house where construction revealed old newspapers and forgotten bits of history. In his childhood home in Los Angeles, his parents found newspapers stuffed underneath the floorboards from the early 20th century, advertising cars for $300 (about $9,500 today — still a bargain!). 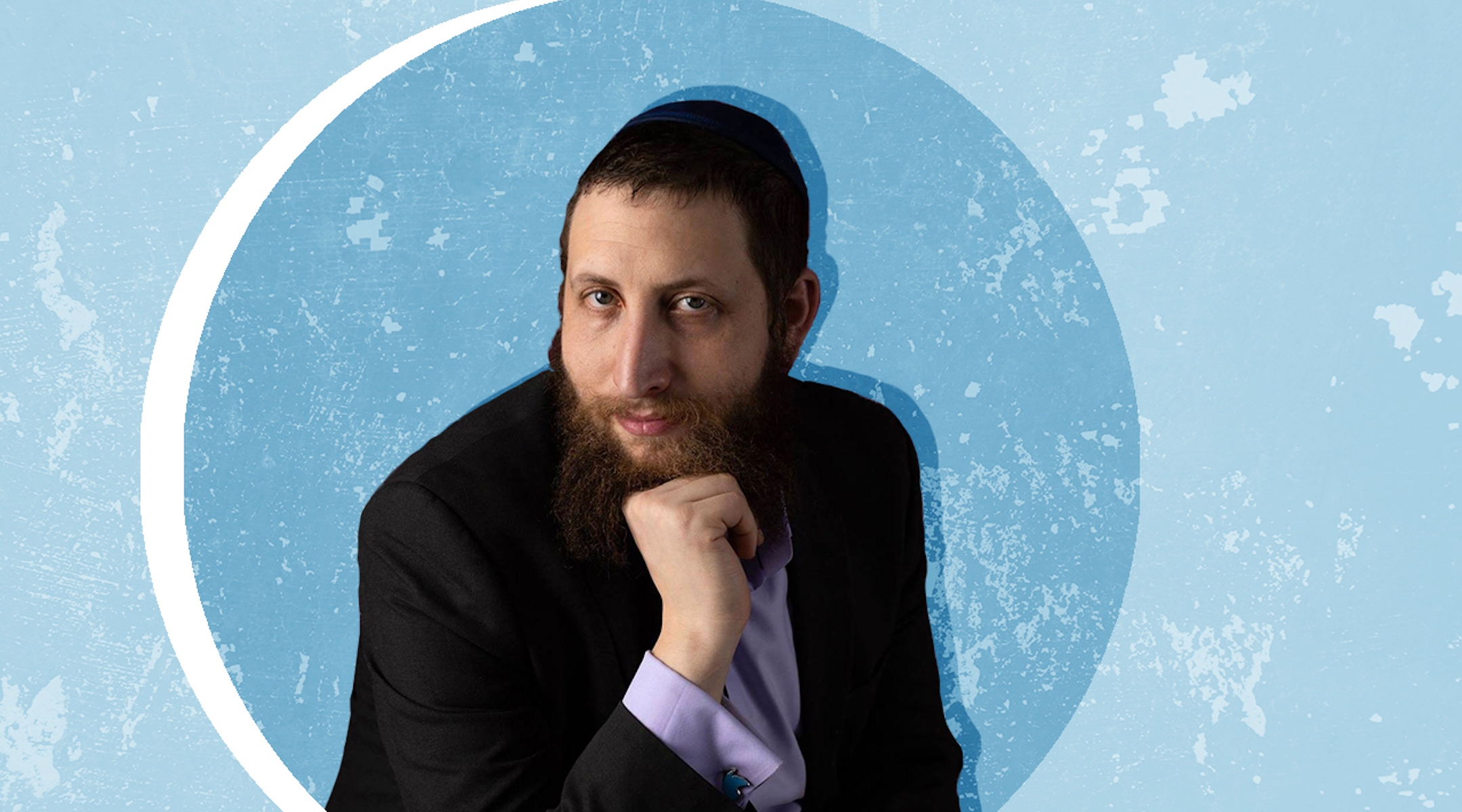 The father of six was named to the Jewish Week’s 36 under 36 list of young Jewish leaders in 2021. In addition to running Techtribe, Lightstone is also the social media editor of Chabad.org. He often speaks and writes about the potential for positivity and education the internet can provide, serving as a TED resident in 2018 where he gave a TED Talk titled, “Illuminating modern life with ancient wisdom.”

So perhaps it’s not surprising that Lightstone found metaphorical significance in his discovery of the Yiddish newspapers. “It shows the house has, if not continuous, at least a hundred years of Jewish history in it,” he said. “If you look down inside, you may find those Yiddish letters inside of every house and inside of every person.”