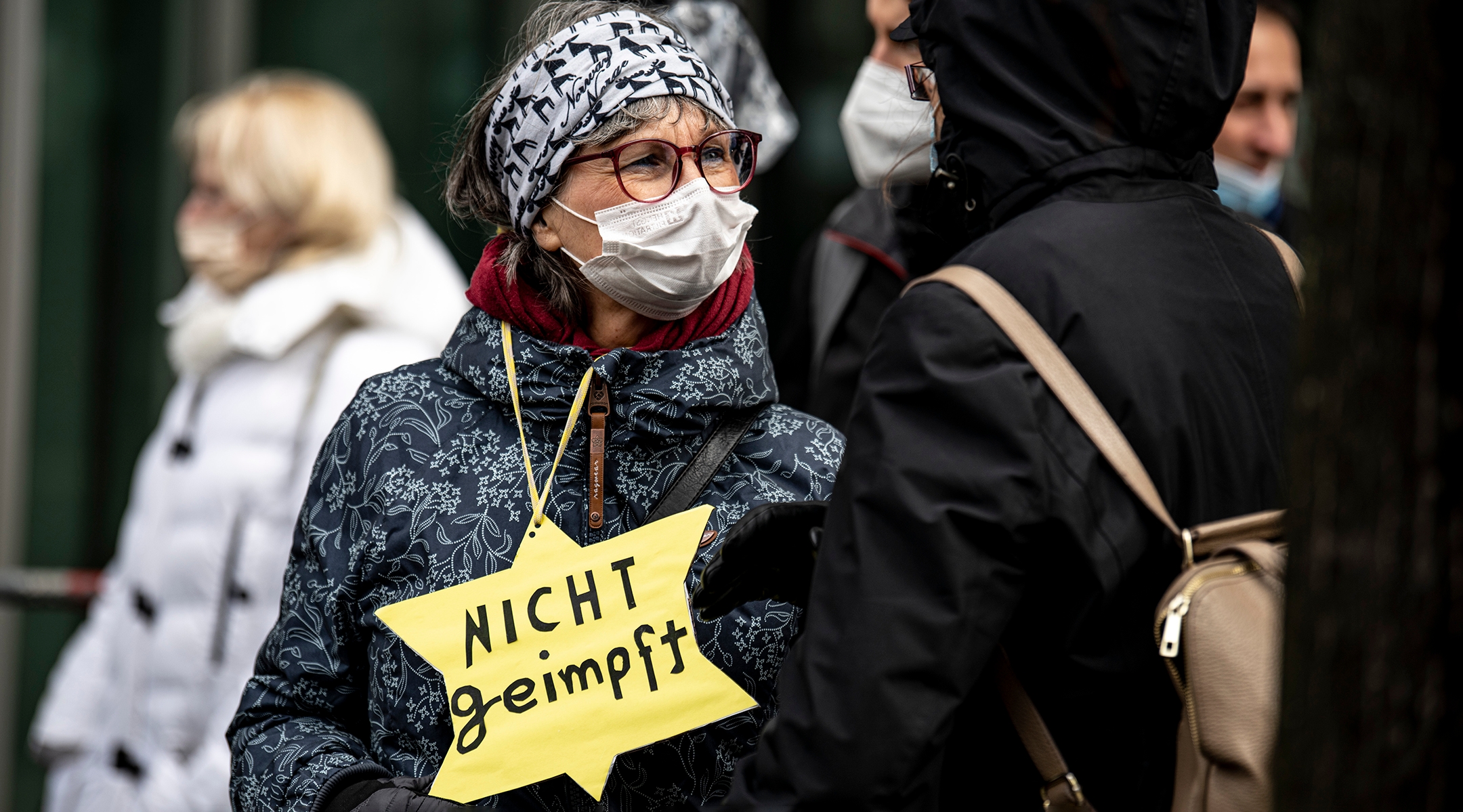 A participant in a demonstration against Coronavirus restrictions stands with a yellow star with the inscription "not vaccinated" in Berlin, March 13, 2021. (Fabian Sommer/picture alliance via Getty Images)
Advertisement

BERLIN (JTA) – Another German city has decided to ban the display of yellow stars at demonstrations against coronavirus lockdown measures.

Police in Dortmund, in the state of North Rhine-Westphalia, announced last Thursday that, effective immediately, the wearing of the yellow Star of David printed with the word “unvaccinated” is banned at protests against government measures meant to curb the COVID-19 pandemic.

Jews in Nazi Germany and most occupied lands were forced to wear identifying symbols, including yellow stars printed with the word “Jew.”

“Anyone who displays the Jewish star in this way is trivializing the planned murder of millions of Jews by National Socialist Germany and endangering public peace,” Dortmund Police Chief Gregor Lange said.

Those applying for demonstration permits will now have to comply with the ban against displaying symbols that trivialize the Holocaust, police told the Evangelical Press Service, and violators will face charges.

Several German states are considering similar regulations — something that Germany’s national commissioner on antisemitism, Felix Klein, has been calling for since the early days of the pandemic. Munich banned the practice in June 2020 and Wiesbaden followed suit in July 2020.

Bremen is considering such a move, according to the city’s Senator of Justice Claudia Schilling. Speaking last week with the German media consortium Redaktionsnetzwerk Deutschland, Schilling said the practice of associating the yellow star “with one’s own vaccination status is not only in bad taste, but in my eyes fulfills the criminal offense of incitement of the people.”

Germany does not yet require that citizens be vaccinated, but the Bundestag, or parliament, has been considering introducing such a measure.

According to Die Welt commentator Till-Reimer Stoldt, a “lunatic” fringe of protesters is suggesting — by displaying such symbols — that Germany has the secret goal of shooting or gassing millions of unvaccinated Germans, the way the Nazis murdered 6 millions Jews in the Holocaust.

“They proclaim that the unvaccinated are ‘the new Jews,’” and some individuals have even called Germany a “Corona dictatorship,” he wrote in an editorial praising the announcement by police chief Lange.

“For a few lunatics, this might sound like a Corona dictatorship, but for the overwhelming majority, it sounds like democracy standing up for itself,” Stoldt wrote.