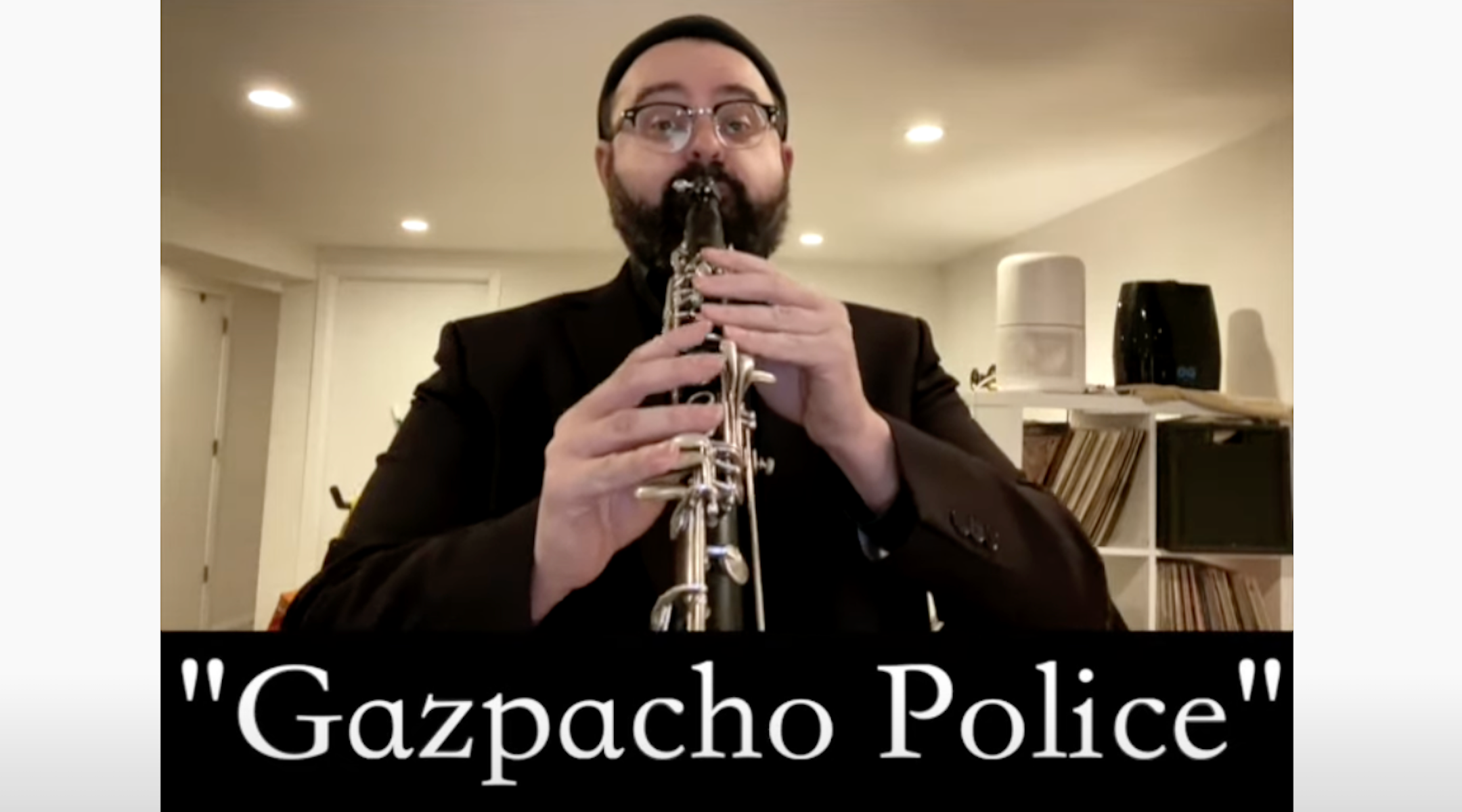 (New York Jewish Week via JTA) — Since Georgia Congresswoman Marjorie Taylor Greene’s “gazpacho police” gaffe went viral in an interview earlier this week, jokes, memes, snarky tweets and the like have circulated far and wide across the internet.

And just when we thought the joke had gone cold (get it?), we caught wind of a creative, and very Jewish, interpretation of the Republican’s blooper: a klezmer song, “Gazpacho Police,” from Brooklyn-based clarinetist and composer Michael Winograd.

“I’m drawn to punny titles and I felt like, whether the Representative knew it or not, she was encroaching on my territory,” Winograd, 39, told The New York Jewish Week. “What was I supposed to do? It would be a shonda (shame) to let that go to waste.”

Winograd posted his original composition, and accompanying video, on YouTube and social media on Thursday — a day after Twitter exploded with mockery after Taylor Greene was heard comparing the House investigation of the Jan. 6 insurrection to the “gazpacho” (she meant Gestapo). As it happens, in January, Winograd had set a goal for himself to release a mini-EP every Thursday — the self-imposed challenge being that he would compose, produce, record and release a song in a single day.

The whole process for the “Gazpacho Police” klezmer song and video — which includes animations of Taylor Greene — took about five hours, he said.

Winograd is no stranger to quick turnarounds. Back in 2020, during the first few weeks of quarantine, he produced an original composition every day. He said it helped him alleviate the stress and anxiety that so many of us were feeling.

Then, last fall, Winograd received a call from one of the producers of “And Just Like That,” HBO’s “Sex and the City” reboot. Unbeknownst to him, they had seen Winograd perform at a family member’s bat mitzvah, and wanted to know if he could produce an original composition to use for the “they mitzvah” scene in the season finale, which first aired on Feb. 3. The scene was shooting in less than a week — so the producers needed an original composition within a day.

Clearly, they had gone to the right person. Winograd’s song, “I’ll Take the Soup” (anyone else sensing a theme here?), can be heard in the opening scene of the “they mitzvah,” in which protagonist Carrie Bradshaw (Sarah Jessica Parker) invites her friends to Paris to scatter her late husband’s ashes.

“It was really nice that their music team and their production team hired somebody to compose something original,” Winograd said. “The people on the crew of ‘And Just Like That,’ the music supervisors and the producers who I worked with are all fantastic.”

A well-respected klezmer composer, Winograd has collaborated with many high-profile modern Jewish musicians, including Frank London and Socalled. He often travels throughout the country and the world performing and teaching klezmer music workshops. His band, The Honorable Mentshn, will soon be going on tour to promote Winograd’s forthcoming album of all-new klezmer music, “Early Bird Special.”

“When I put out serious records, I try to actually spend a lot of time on publicity,” he said. “It is very ironic that something like this doesn’t take much work, yet when I put out something that I’ve been working on for years, it takes lots of money and time to get similar results.”

Still, Winograd said he’s excited — if not at all surprised — by the online reactions to his video. On Facebook, one commenter wrote, “This is truly the best that could have come out of the whole thing.” Another commenter said he had purchased the URL gazpacho-police.net and suggested a collaboration.

“This was asking for it,” Winograd quipped, offering to give Rep. Taylor Greene a co-writer credit on the track.

“While it’s funny, obviously [‘Gazpacho Police’] is unfortunately about more than just the music,” Winograd said, hinting at the more sinister intentions behind her ridiculous statements, such as blaming “Jewish space lasers” for California’s wildfires in January 2021. “But still, when someone says something like that, what are you going to do? Not make it into klezmer song?”