Holocaust comparisons are no laughing matter 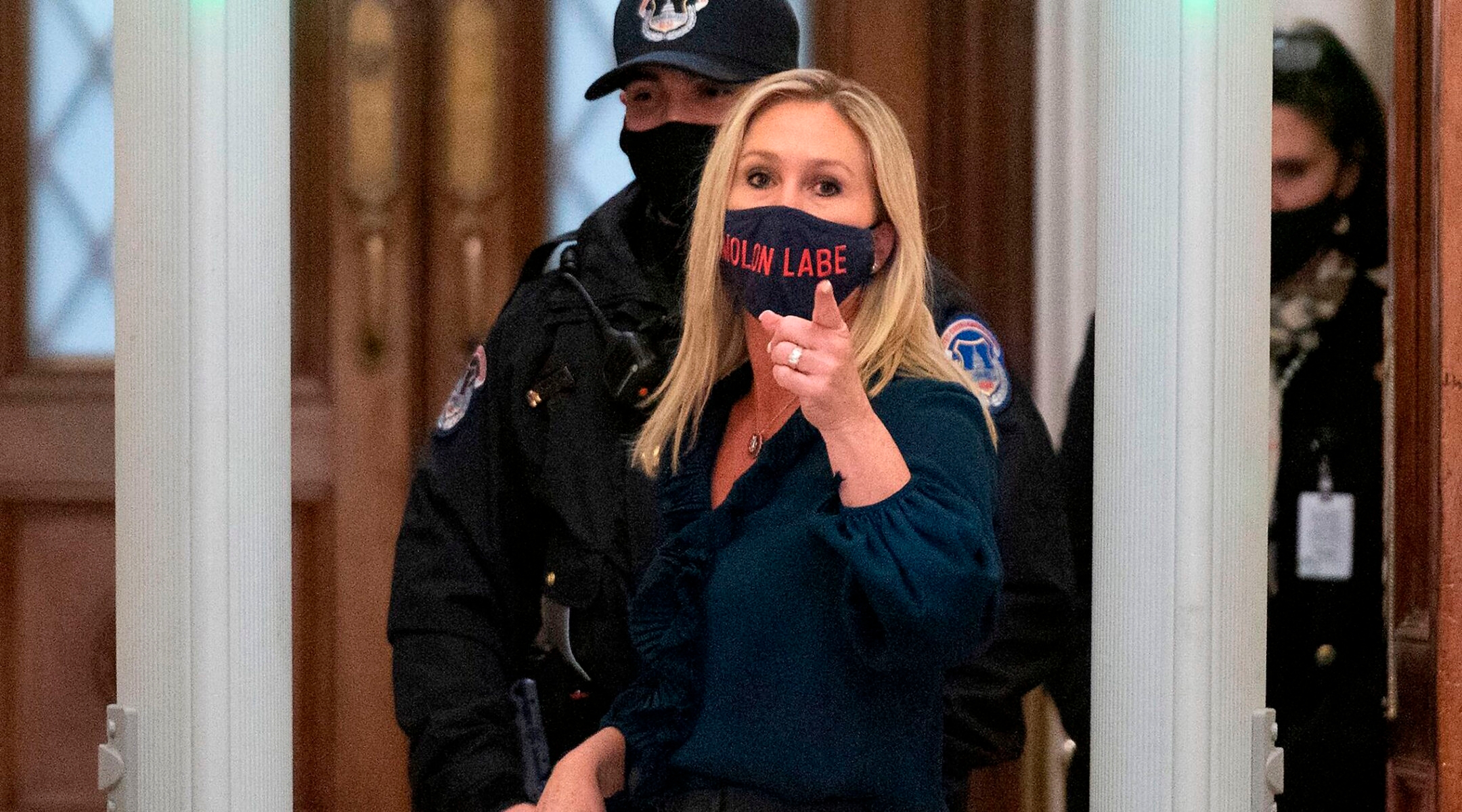 (JTA) — The ribbing of Marjorie Taylor Greene last week was straight out of the Borscht Belt.

When the Georgia Congresswoman railed against Nancy Pelosi’s “gazpacho police,” Twitter ladled on the ridicule. Jokes flew about “soup Nazis.” GOP Never Trumpers said their party had gone from “soup to nuts.” My colleague Ron Kampeas had my favorite tweet: “This is what happens when you’re uncucumbered by history.”

Before Taylor Greene’s gaffe (a spoonerism in spirit if not in fact) stopped spreading, she too had joined in on the fun, saying her critics would be “thrown in the goulash.”

Confusing “gazpacho” with “Gestapo” is silly, of course, but comparing the Congressional investigation into the Jan. 6 Capitol riots with the Nazis is no laughing matter. Taylor Greene has gone done this road before, joining the throngs likening COVID-19 restrictions to the Third Reich. Jewish groups begged her to stop, and she even went on a repentant tour of the U.S. Holocaust Museum.

Because Taylor Greene also appeared to buy into some weird theory about Jewish space lasers, a lot of people assume her Nazi comparisons are further evidence of her antisemitism. I’d argue, however, that Nazi comparisons are not antisemitic, but ignorant and dangerously provocative. Remember: If you are calling your opponent a Nazi, you are at least acknowledging that the Nazis are the bad guys. What responsible Jewish groups have been saying about Nazi comparisons is not that they are anti-Jewish, but that they trivialize a unique historic event, traumatize its survivors and poison public discourse.

That’s not a Jewish issue. That’s an everyone issue.

Of course, comments that are not antisemitic in intent can be antisemitic in effect. When Whoopi Goldberg made her uninformed comments about the Holocaust, groups like the Anti-Defamation League objected not because what she said was antisemitic, but because any unchallenged distortion of the historical record suits the purposes of Holocaust deniers — who invariably are antisemitic.

When swastikas were plastered on the walls of Washington, DC’s Union Station last month, no one seriously debated the motivations of the vandals. It doesn’t matter who flashes the swastika: a bored teen, a disaffected punk rocker, a Canadian truck driver, an anti-fascist. The swastika feels to Jews like an assault, the way a noose feels like a threat and a desecration to Blacks.

Inappropriate Holocaust comparisons are not the folly of any one party — the left has distorted the Holocaust to condemn immigration policy and to smear the Israeli government, to take two examples.

There is a difference, however, between comparing everything to the Nazis, and asking in good faith if certain politicians or movements have embraced tactics or rhetoric that genuinely appear totalitarian. The Nazis were not known for assembling bipartisan investigative committees and subpoenaing colleagues and eyewitnesses for public hearings into, say, the Beer Hall Putsch. The Nazis did not make Jews wear yellow stars in what any sane person would consider the interests of public health. But they did understand how a big lie, repeated often enough and embraced by politicians and pundits who should know better, can erode confidence in democracy.

Still, not every would-be strongman is another Hitler. We can talk about — and challenge — threats to democracy without playing the Nazi card. We might even be more effective in doing so.

Jews aren’t immune from making bad Holocaust analogies, or other inappropriate comparisons. In a suit filed last week by a number of Orthodox Jewish New Yorkers, challenging the city’s vaccination mandates, the plaintiffs asserted that “a government dictate that conditions freedom on vaccination is a form of slavery and subjugation” and “violates numerous commandments in the Torah that require one to remember and internalize the great Exodus from slavery in ancient Egypt.”

That is not only questionable Torah, but a deep misunderstanding of slavery.

There was a time when one could be reasonably confident that outrageous historical comparisons did more harm to the person who made them than the target they were aimed at. But polarization and escalating rhetoric have made once verboten political speech routine. The Republican National Committee declared the House select committee investigating the Jan. 6 insurrection a “persecution of ordinary citizens engaged in legitimate political discourse.” As Aidan Scully writes in the Harvard Political Review, “Once a country’s window of mainstream political discourse shifts far enough to the extreme, it passes a point of no return…”

Marjorie Taylor Greene might have learned the difference between “gazpacho” and “Gestapo,” but does anyone seriously think she is done calling Nancy Pelosi a Nazi?