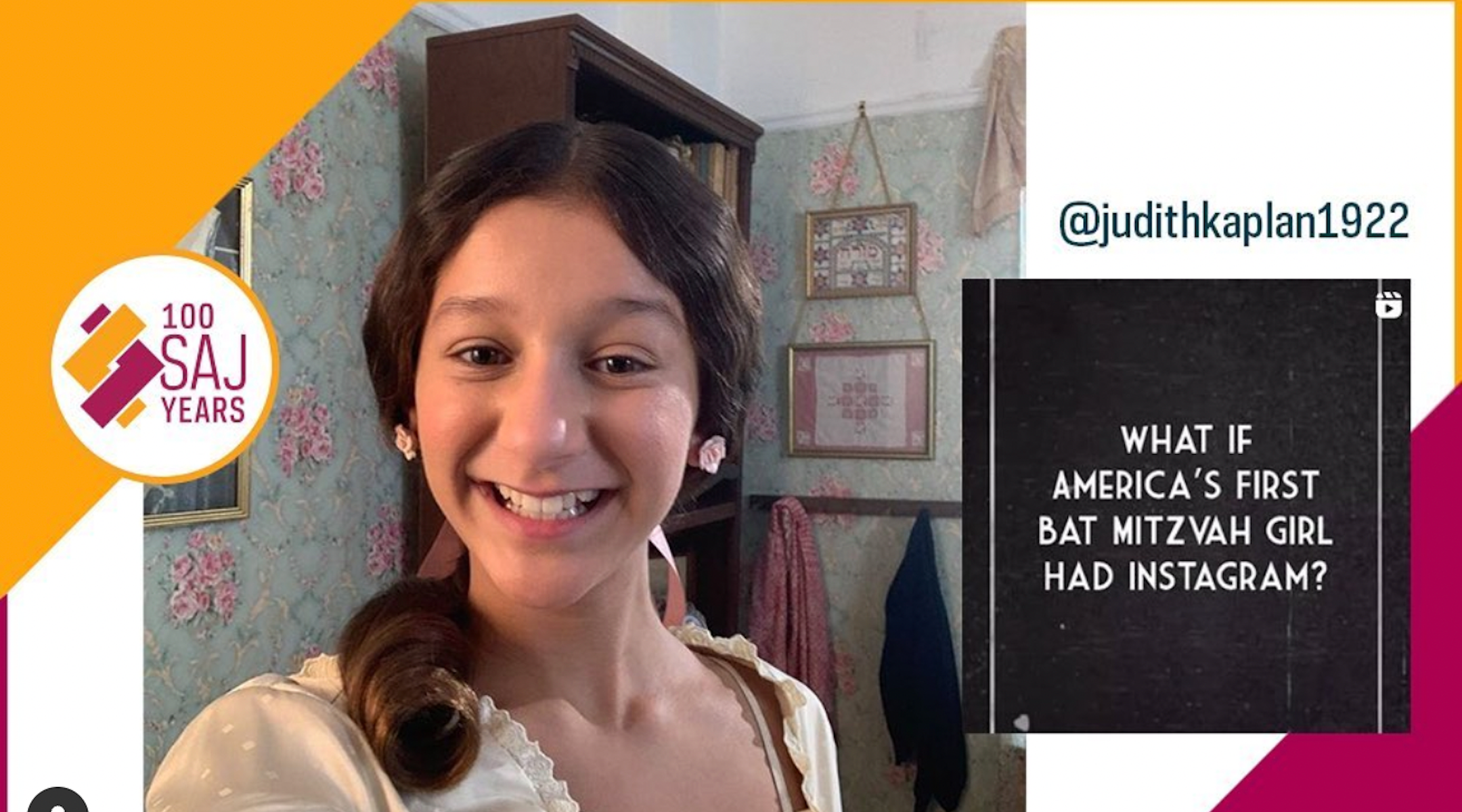 (New York Jewish Week via JTA) — If Instagram existed 100 years ago, what would 12-year-old Judith Kaplan, the first American girl to have a bat mitzvah, be posting? What issues would she care about? What feelings would she share with her friends and followers on social media about taking such a big step?

These are all questions that video producer Mik Moore and director Jeremy Newberger sought to answer when they created the Instagram account @judithkaplan1922. The multimedia miniseries retells Kaplan’s Jewish milestone through a medium with which most 12 year olds today are all too familiar.

“The idea was that you can use a platform like Instagram to tell the story of a young girl — who might have been using Instagram if it had existed at this historical moment,” Moore told The New York Jewish Week.

Judith Kaplan was the oldest daughter of Rabbi Mordecai Kaplan, a prominent teacher at the Jewish Theological Seminary and the founder of the Society for the Advancement of Judaism – the Manhattan synagogue now known as SAJ-Judaism That Stands for All. His ideas of Judaism as a “civilization” eventually led to the founding of Reconstructionist Judaism, the smallest of Judaism’s major denominations.

Allowing his daughter to celebrate her coming-of-age in public — an honor previously reserved for Jewish boys — was just one of the ways Kaplan and Reconstructionism were ahead of the curve: It took another 50 years for bat mitzvah ceremonies to become mainstream celebrations in Reform, Conservative and, eventually, many Orthodox synagogues.

The Instagram account, which will feature 11 one-to-three-minute episodes, will culminate on the 100th anniversary of Judith’s bat mitzvah on March 18, 2022. It is part of a year-long series of events at SAJ commemorating the Reconstructionist congregation’s 100th anniversary. The festivities include a celebratory event in March in collaboration with the Jewish Women’s Archive, where Dylan Tanzer, the actress who plays Kaplan in the series, will perform a monologue.

The Judith Kaplan Instagram account is in part inspired by the popular social media account @eva.stories, a social media series portraying a young girl, Eva Heyman, who narrates what happened to her and her family during the Holocaust. The goal is to expose middle schoolers to history in a format that they can relate to and to bring the story of a young girl back to the forefront in a new way.

The research for Kaplan’s story included discussions with 12-year-old girls from around the tristate area and Philadelphia. They helped Moore with the script and with understanding the social media presence of a social justice-oriented and politically active tween. The girls told him that many of their friends use Instagram to repost infographics on causes they are passionate about — this gave Moore the idea to have Kaplan “post” and “reshare” information and thoughts on current events that she may have encountered, like the suffragette movement, and statements from the NAACP and the American Birth Control League an early version of Planned Parenthood.

Moore, who runs a creative agency that produces videos and content for social impact campaigns, also consulted biographers of Mordecai Kaplan and experts on the history of bar and bat mitzvahs in the United States in researching the script and narrative arc for the series.

Tanzer, who is 12 in real life and attends Golda Och Academy in West Orange, New Jersey, was one of 400 girls who auditioned. Her energy for the role bursts out of the screen as she eagerly recounts to her followers the thoughtful discussions she has with her father and the nerves she feels ahead of her big day.

The series was shot over the course of a single day in January, Moore said, at his grandparents’ apartment in Chelsea. Moore, whose family has belonged to SAJ for decades and whose grandparents were friends with Kaplan, said it was special filming the series in an apartment where Judith had actually spent time. (When Kaplan was 12, her apartment would have been on the Upper West Side.)

The series is produced by Ironbound Films, and Moore also partnered with Moving Traditions, a Jewish non-profit that develops educational programming for teens. When every episode has premiered on the Instagram account, they will be combined into a short film that can be played at b’nai mitzvah classes around the country.

“That way, Judith’s story gets passed on to the next generation in a language and in a medium that is potentially more interesting to students and appropriate to their age group,” Moore said.

The account seeks to remind viewers how much work there is still to be done in terms of inclusion in Judaism. “I think our generation is going to change things for girls,” Kaplan says earnestly in one episode while discussing voting rights and her desire to complete a university degree. Kaplan went on to earn her PhD from Hebrew Union College-Jewish Institute of Religion and to teach music pedagogy and the history of Jewish music at the Jewish Theological Seminary Teachers Institute.

“There’s some really interesting parallels in the innovation of the bat mitzvahs a hundred years ago with ‘b-mitzvahs’ today,” Moore said, referring to a gender-neutral ceremony for trans and non-binary kids — of which SAJ has been one of the innovators.

“One of the themes is that this ceremony at SAJ a century ago sparked some radical changes in the role of women and girls in Jewish life and that started a tradition where those kinds of changes are still continuing to this day,” he added.