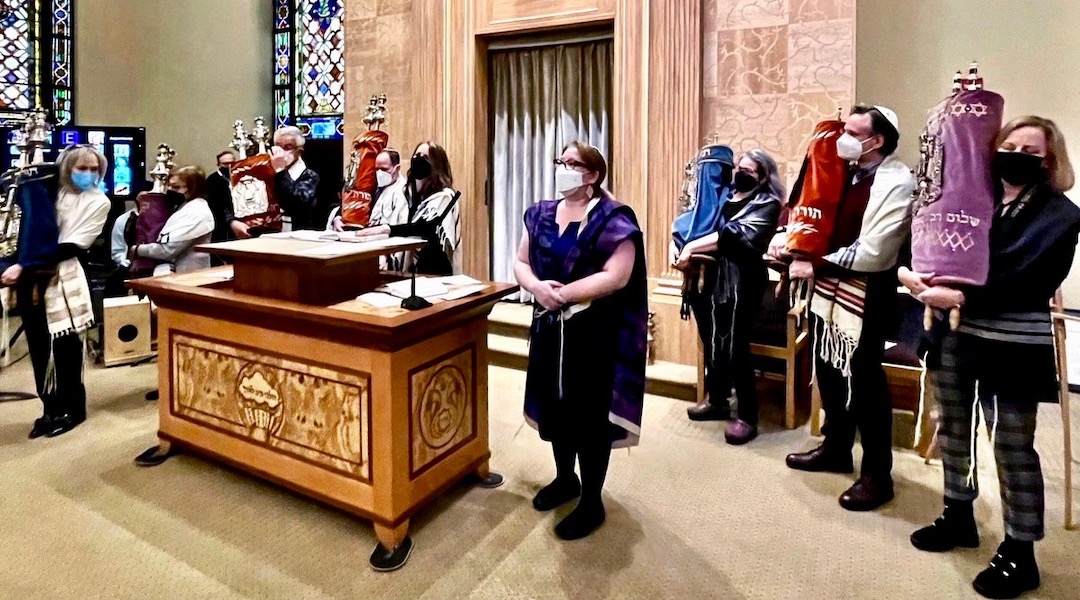 Masks have been a regular part of synagogue attendance in New York during the pandemic, as seen here at SAJ, a Reconstructionist synagogue on the Upper West Side on Jan. 29, 2022. Now that the state's mandate has expired, synagogues are free to make their own policies. (Courtesy Comptroller Brad Lander)
Advertisement

(New York Jewish Week via JTA) — One hundred years ago this March, a girl was called to the Torah at a Manhattan synagogue.

Her short walk from pew to lectern was a giant leap for American Judaism: When she got there, Judith Kaplan became the first Jewish girl in America to become a bat mitzvah.

The synagogue where it happened, SAJ, Judaism that Stands for All, a Reconstructionist synagogue on Manhattan’s Upper West Side, still stands, and last week began celebrating not only its own 100th anniversary but a century of innovation by the youngest of Judaism’s four major denominations.

Judith was the oldest of four daughters of Rabbi Mordecai Kaplan, a legendary teacher at the Conservative movement’s Jewish Theological Seminary and the founder of what was then called the “Society for the Advancement of Judaism.”

Deeply traditional in his own practices, Kaplan viewed Judaism as an evolving civilization rather than just a religion. According to his approach — eventually called Reconstructionist Judaism — traditional Jewish law was a resource, but not binding on individual Jews. As a result, its practitioners could interpret Judaism in the light of contemporary life and thought without abandoning its traditional values. Judith became a bat mitzvah — a coming-of-age ceremony previously reserved for boys — on March 18, 1922, just two months after the synagogue’s founding

“There are many innovations and contributions that Reconstructionist Judaism has made that helped shape Jewish life in the 20th century,” said Rabbi Deborah Waxman, president and CEO of Reconstructing Judaism, the central organization of the Reconstructionist Movement.

She said Kaplan used SAJ as “the laboratory environment that could test his ideas to see how they worked before they were circulated to the wider world.”

This past Shabbat, SAJ celebrated its 100th birthday with a lecture about 1920s New York.

It’s the first of a year-long series of events that also marks the centennial of Reconstructionist Judaism and the profound impact it has had on the Reform and Conservative movements.

“We were the first seminary to admit openly gay and lesbian students in 1984,” Waxman said. “We established a commission on homosexuality, we embraced same-sex relationships in 1994, and our decision in 2015 to graduate rabbinical students who are partnered with non-Jews was groundbreaking — something no one else is doing yet” at the seminaries associated with other denominations.

In addition, Reconstructionist Judaism was the first to adopt patrilineal descent, which considers a child born of either a Jewish father or mother to be Jewish if the child is raised as a Jew. The Reform movement later adopted this policy, while the Conservative and Orthodox movements consider a child to be born Jewish only if the mother is Jewish.

As the congregation marks its 100th birthday, it is celebrating “not just the past but where we are going in the next century,” stressed Donna Katzin Altschuler, a co-chair of the centennial committee.

SAJ’s congregation today is 270 families, its largest number in the last 10 or 15 years, according to its spiritual leader, Rabbi Lauren Grabelle.

Reconstructionist Judaism did not become a movement until the founding of the Reconstructionist Rabbinical College in Philadelphia in 1968. Until then, SAJ “was the center of the world for us,” said Miriam Eisenstein, 83, the daughter of Judith Kaplan and her husband, Rabbi Ira Eisenstein, who helped implement Kaplan’s ideas and was the founding president of the rabbinical college. 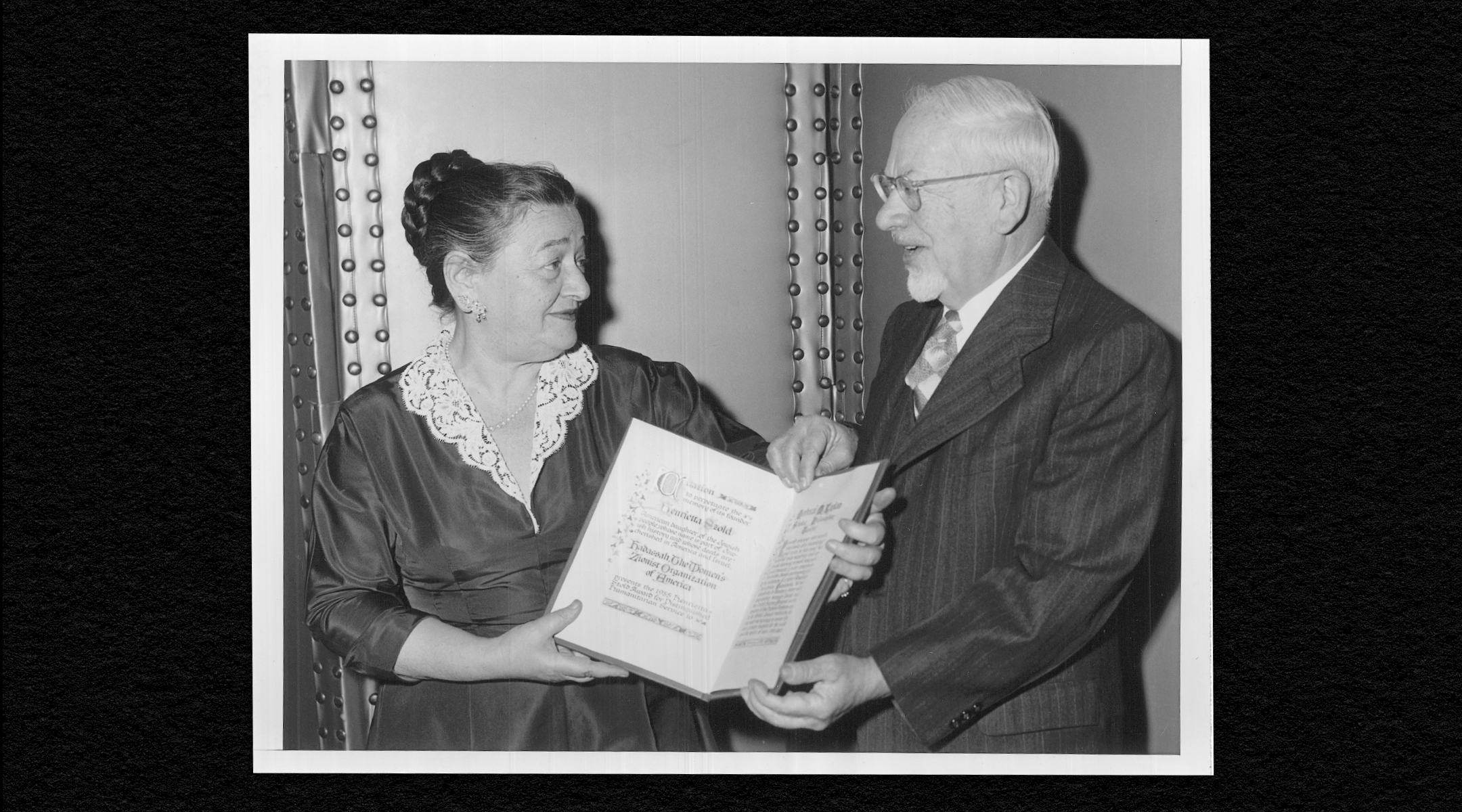 Rabbi Mordecai Kaplan, the founder of the Reconstructionist movement, receiving the Henrietta Szold Award in 1955. (Courtesy)

“Our Haggadah and the siddurim — everything that came out of the Reconstructionist movement — came from SAJ,” she said, referring to its Passover liturgy and prayer books.

The movement’s Haggadah was published in 1941 as an “explicitly political Haggadah that expanded the concept of what constituted liberation,” noted Deborah Dash Moore, a professor of Judaic Studies at the University of Michigan who delivered last Shabbat’s lecture about 1920s New York. “It opened up possibilities for rewriting the Haggadah.”

Today the Reconstructionist movement has 97 congregations and about 50,000 members worldwide, the smallest of the major movements.

Kaplan, however, did not initially intend to create a separate Jewish movement. Instead, he believed instead that his philosophy would become the norm within the Conservative movement, according to David Kaufman, founding director of the Center for New York Jewish History.

“He was enormously influential on multiple generations of Conservative rabbis and teachers,” said Kaufman. “What he hoped he would do is shape American Judaism. And what happened is that Reconstructionist philosophy was absorbed by most American Jews without them knowing. He said Judaism is part of a civilization and that its folkways — such as the practice of Shabbat and keeping kosher —  are followed not because Jews are being obedient to a commanding God on high, but rather because Jewishness in the modern world has to be about something more than the halachic system [Jewish law] of Judaism.”

“He took the supernatural out of Judaism and planted [Judaism] in this world,” he added.

Kaplan also envisioned the synagogue as being more than a just place for prayer — it could also serve as a community center. At SAJ today, said Hermann, “we have a knitting group and we’re starting a running group. We have classes that run during services for those who might prefer the modality of learning over prayer. We have an art gallery in the social hall and concerts that feature connections with Jewish composers or themes, and a happy hour Shabbat with live music.”

This past Shabbat, in addition to the lecture, Herrmann and Cantor Lisa Shapanka Arbisser were joined during the service by the synagogue’s Hiddur Band. There were also greetings from Waxman and several public officials, including Rep. Jerry Nadler, Manhattan Borough President Mark Levine, Ne York City Councilmember Gale Brewer, the Rev. Nigel Pearce of Grace Church and other interfaith leaders. 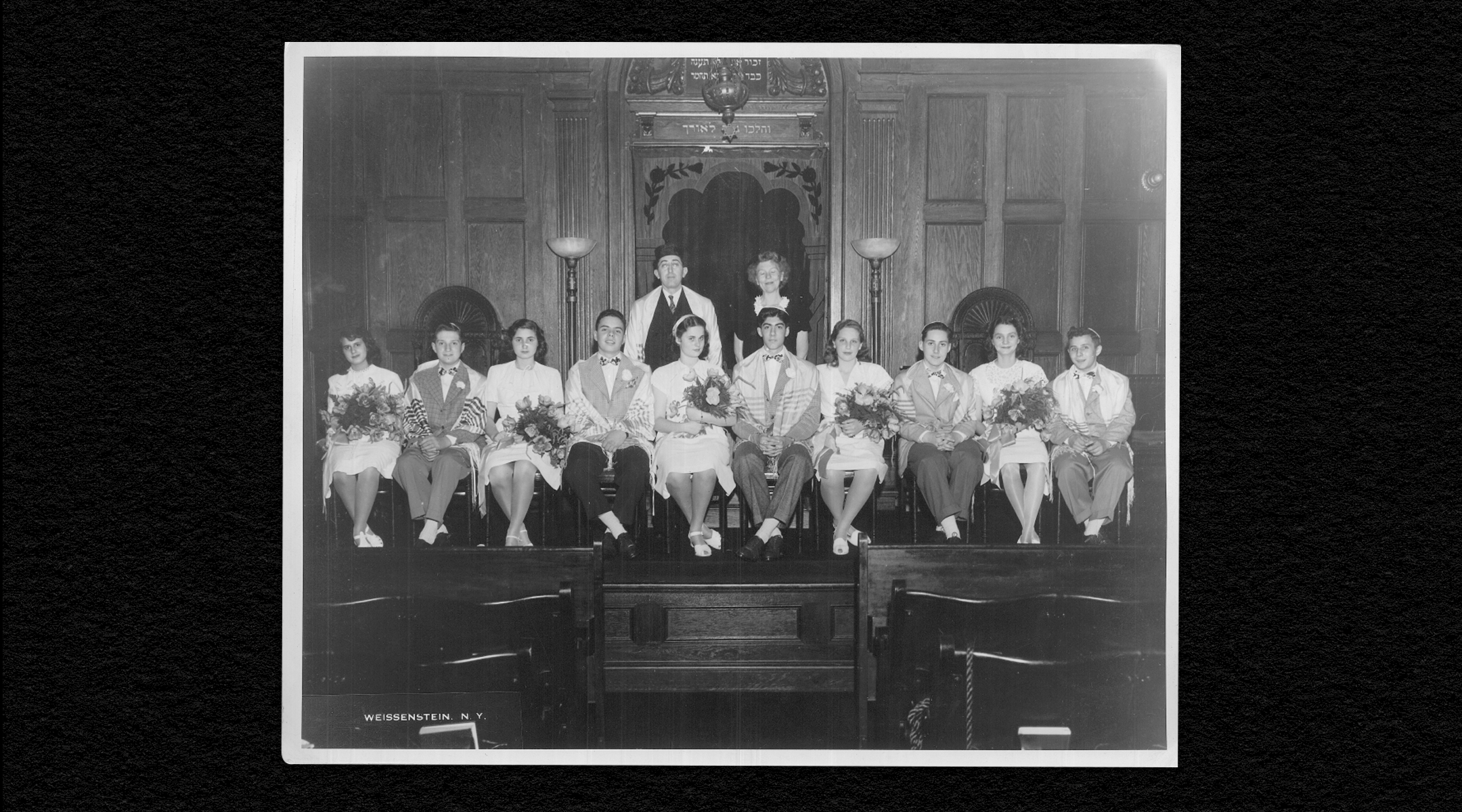 SAJ’s Hebrew school graduating class of 1945, with Judith Kaplan Eisenstein — the daughter of SAJ’s founder, Rabbi Mordecai Kaplan, who also had the first bat mitzvah in the U.S. — and her husband, Rabbi Ira Eistenstein, standing at rear. (Courtesy)

SAJ plans to commemorate Judith Kaplan’s groundbreaking bat mitzvah in March, with festivities that will be held in conjunction with the Jewish Women’s Archive, according to Hermann. She added that, due to COVID restrictions, attendance at all events in the synagogue in the near future will be limited to 75 people, even though the sanctuary seats 250.

“We expect hundreds to watch online,” she said, “including the children and grandchildren of some of the founders.”

Anniversary events this year will include a talk and panel discussion Feb. 19, “Social Justice at SAJ: Past, Present and Future,” and a program on March 19,”Rise Up/Bat Mitzvah at 100: A National Shabbat.”

Rabbi Sandy Eisenberg Sasso, the first woman ordained by the movement in 1974, consulted with Judith before writing a children’s book about the bat mitzvah, “Judy Led the Way.”

She said Judith had been asked to sit in the front row with men on either side of her before she was called. “She said, ‘I had to talk loud and say every syllable. I had mixed feelings. I was certainly happy to be important, but on the other hand I was uncomfortable.’”