To help Ukraine, these Jewish bakers are making hamantaschen 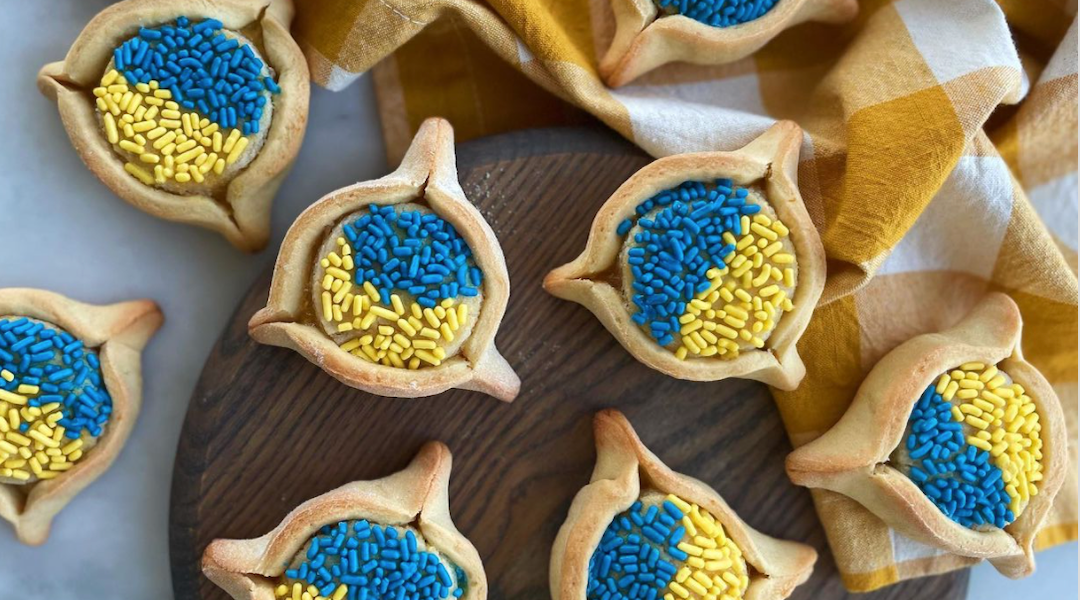 Jamie Wei sells hamantaschen with the colors of the Ukrainian flag. (chopsticksmeetfork/Instagram)
Advertisement

With Purim just a few weeks away, a Berlin baker has turned to her kitchen to whip up hamantaschen to support Ukrainian refugees fleeing the ongoing Russian invasion.

Laurel Kratochvila, the Jewish-American owner of Fine Bagels, a New York-style bagel shop on Berlin’s East Side, got the idea when she was stuck at home quarantining with COVID and spent an entire day watching the news.

“My husband was raised in Czechoslovakia in the post-’68 Russian occupation and we were both heartbroken –– him even more so,” Kratochvila said.

That led to a discussion between the two about how they could contribute to the Ukrainian cause. Purim was around the corner, when they would normally be making poppy seed and chocolate hamantaschen anyway, so they decided to launch “Hamantashen For Ukraine” and to donate their proceeds to Polish Humanitarian Action, an organization that is distributing food, hot drinks, diapers, hygiene products and blankets, as well as providing information and transportation for newly arrived refugees from Ukraine.

So far, over 30 home bakers and bakeries from Warsaw to Portland have signed up. A full list of participants can be found under “where to find hamantashen!” on their site. 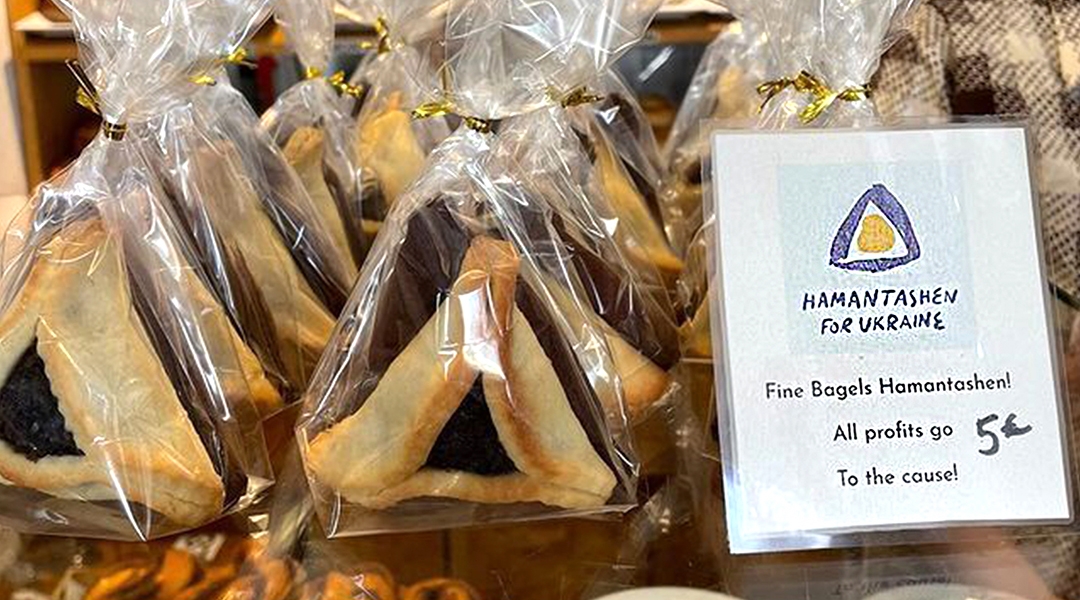 Hamantashen for Ukraine for sale. (Courtesy of Fine Bagels)

(In the spirit of full disclosure, I am assisting Kratochvila by reaching out to bakers in the United States to join the cause — as well as making my own graham cracker cherry cheesecake hamantaschen, inspired by a dessert my grandmother used to make.)

Kratochvila reached out on Thursday, the day the invasion began, sharing the idea. Feeling similarly helpless and eager to do something (not to mention feeling flushed with fond memories of briefly visiting the country on a heritage trip just six months earlier), I immediately jumped at the opportunity to help out.

The response from Jewish bakers across the United States was immediate and decisive. From Los Angeles and Portland to Chicago, Philadelphia, and New York City, Jews were eager to lend their hamantaschen to the cause.

Tamar Fasja Unikel, a co-owner of Masa Madre in Chicago said “coming together with a world of bakers seems ideal to show the world is watching. Purim is a holiday about survival and fight and I hope that people around the world can learn the message.” Masa Madre will be selling packs of six hamantaschen featuring their unique flavors this year — Peanut Mazapán, Cajeta Oblea and Guava Ate — and they will be donating a third of all their profits.

Megan Tucker, the owner of the L.A.-based vegan Jewish deli Mort & Betty’s, felt compelled as well to get involved. “Both my grandparents’ families survived and fled Soviet pogroms in Lithuania. This part of my family history makes me want to do what I do best to support Ukrainian refugees.”

At Mamaleh’s Delicatessen in Cambridge, Massachusetts, Rachel Sundet is donating 10 percent of all their hamantaschen sales to the fundraiser. “We’ve participated in similar kinds of fundraisers (like some of the Bakers Against Racism initiatives),” said Sundet. “And it always feels better to have something to do in times when we feel helpless to what’s going on in the world.” 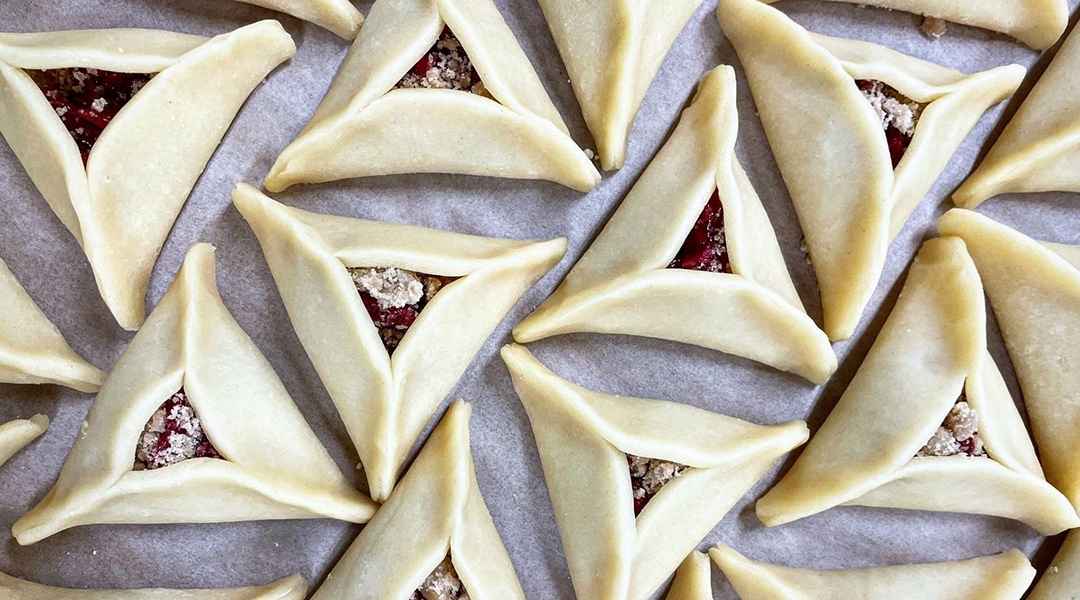 Supporters can choose from three flavors — chocolate-toffee, raspberry-halvah, and date-walnut-white chocolate — to purchase individually or in boxes of 12 from March 14 through March 20.

As word of the fundraiser got out, Chef Jeremy Umansky jumped on board, promising to start offering plum and peach hamantaschen for the cause next week at his Larder Delicatessen and Bakery in Cleveland.

“My family fled Ukraine to escape Russian persecution and death several generations ago,” said Umansky. “To see the same thing happen again in my lifetime is devastating. Coming together with my Ukrainian sisters and brothers and supporting them against the atrocities that they are currently experiencing is the least that I can do. May the Ukrainian people emerge from this stronger than ever!” 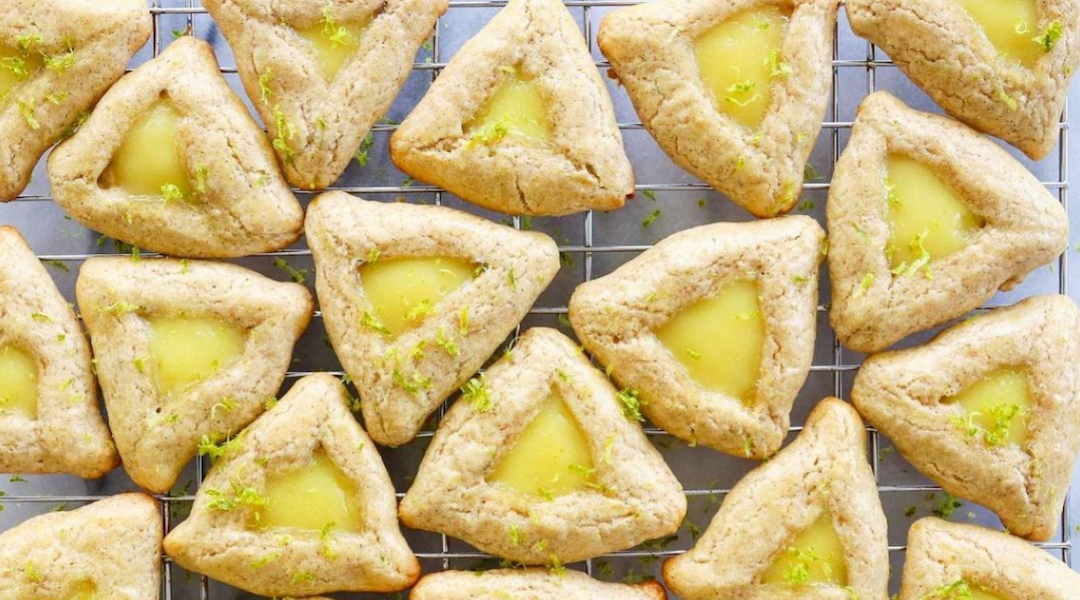 Amy Kritzer has raised over $2,000 as part of Hamantashen for Ukraine. (whatjewwannaeat/Instagram)

Additional culinary-based initiatives are underway as well. Fan-Fan Doughnuts in Brooklyn posted that they will “Bake For Ukraine,” selling ponchiki, a type of Ukrainian doughnut, from March 14 through March 20 with proceeds going towards a Ukrainian organization assisting children impacted by the ongoing war.

There’s also “Cook For Ukraine” with New York-based DACHA 46 joining forces with Alissa Timoshkina, a Russian food creative in London, and Chef Olia Hercules, who has been especially outspoken throughout the invasion. The Ukrainian cookbook author has family in the country, including her parents and a brother who recently joined the territorial defense in Kyiv.

Kratochvila said she’s overwhelmed by the enthusiastic response from bakers across Europe and the United States who are jumping in, donating their time and energy for this fundraiser.

“I know it’s not going to stop Putin,” she said. “But hopefully, it will help some people who are in a very desperate situation.”

Bakeries, cafés, and home bakers who wish to join the effort can contact Hamantashen For Ukraine.