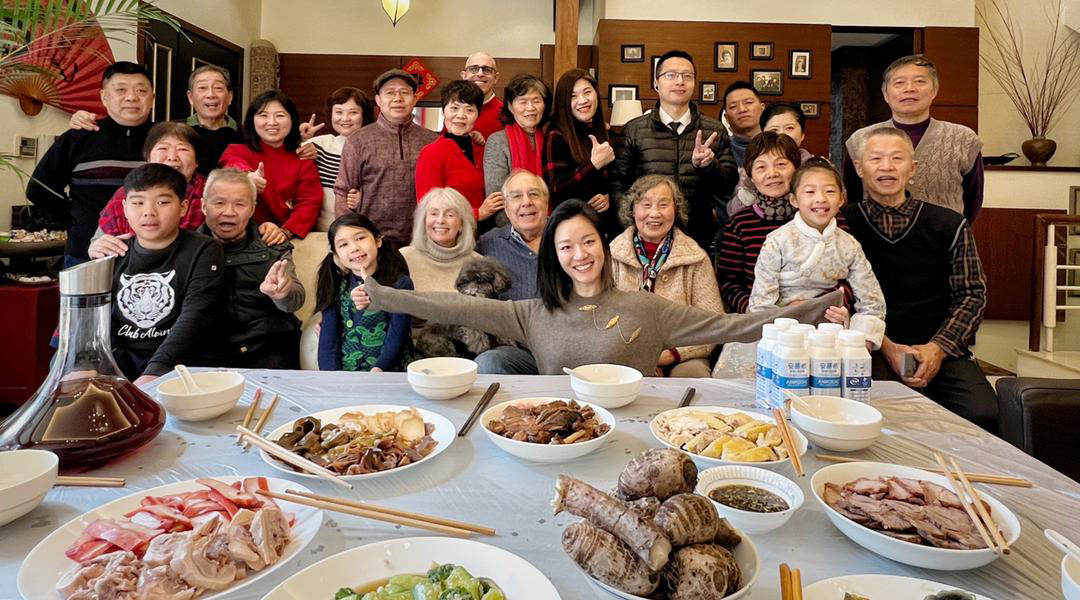 Scott Pollack is shown with his family on the Lunar New Year. He moved his parents, center, who are from California, to Shanghai in 2020 so the family could be closer to one another during the pandemic. (Courtesy of Scott Pollack)
Advertisement

TAIPEI, Taiwan (JTA) — Rabbi Martha Bergadine had been in a sort of limbo since January, when she decided to leave Hong Kong for the first time in two years to visit her son at college in the United States.

At first, the timing seemed right: Hong Kong — with a “dynamic COVID-19 policy” that had helped keep the spread of the virus under control — boasted one of the world’s lowest infection and death rates: For most of December, the seven-day new case average was less than 10 per day.

Enter the Omicron variant. In December, as COVID-19 cases ramped up in the United States and around the world, Hong Kong banned flights from multiple countries, including the U.S., for 14 days in an abundance of caution. But in early February, cases were appearing by the hundreds. In March, tens of thousands of cases have been reported per day and Hong Kong’s death rate has become one of the world’s highest.

Bergadine, who is a rabbi but serves primarily as the educational director of Hong Kong’s United Jewish Community (UJC), had planned to return to Hong Kong on Jan. 17 with a two-week hotel quarantine. But because of the ban on U.S. flights, she decided to try what Hong Kongers call a “washout” — spending two weeks in a third country to “wash out” any virus risk before flying back to Hong Kong.

So Bergadine landed in Finland. Then direct flights from Finland were banned by Hong Kong. A lucky flight from Helsinki to Amsterdam to Hong Kong eventually reunited her with her husband and daughter. She got out of quarantine on March 4, more than a month later than she originally planned. 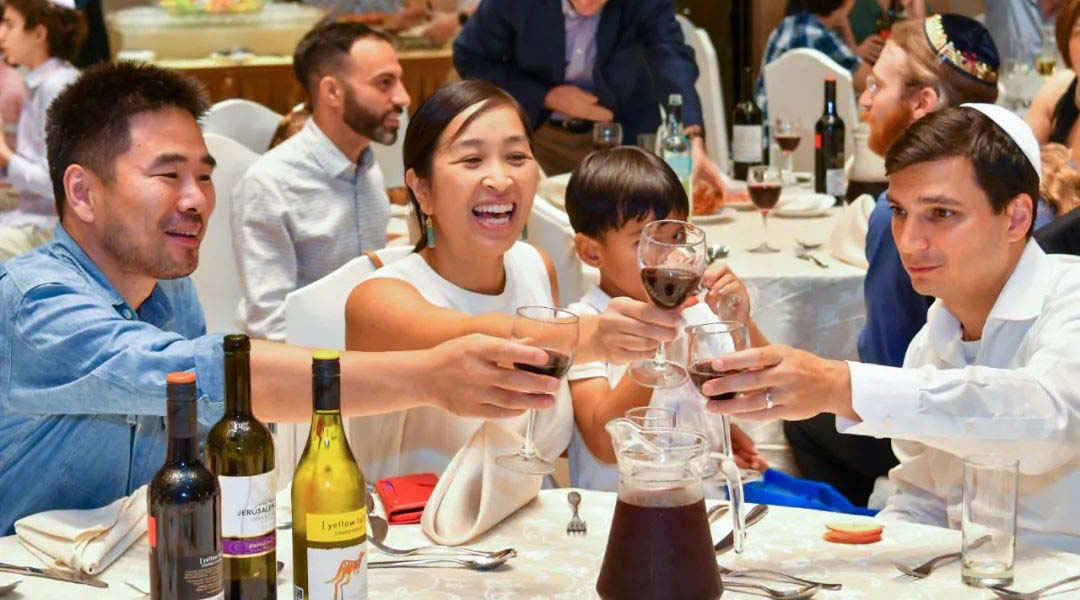 A view of a Rosh Hashanah dinner in Shanghai, 2021. (Courtesy of Hannah Maia Frishberg)

“I’m just relieved to have gotten back. The route that I took, that flight has now been banned for two weeks,” she said. “So I kind of feel like I got lucky and snuck in.”

As the two-year pandemic appears to be ebbing in North America, Jewish communities there that were hard-hit by COVID are now easing back into something that looks like normalcy. In Hong Kong and China, however, the virus is spreading with a vengeance that has made March 2022 look like March 2020.

Bergadine’s UJC, one of several Jewish communities in Hong Kong, has fluctuated between in-person, online and hybrid events for the past two years. The city is now enduring its fifth — and worst — wave. The expectation of a two- to three-week quarantine in a hotel — which could set anyone back thousands — and pandemic policies that seemed to shift almost daily have discouraged community members, most of whom came to live in Hong Kong from other countries, from leaving their city for the past two years.

“I think anyone who pretends this is easy has the bravest face ever,” said Robin Roschke, president of the UJC. “One of the hardest things for congregants is to watch what’s going on in their home countries and not be able to see their families and friends. We have made an effort to ensure that we have been a sounding board for many of our congregants.”

The story has been similar for communities in mainland China and Taiwan. Both countries have relied on “zero COVID” policies to maintain low case and death counts, though not always as successfully as their governments have hoped. Relatively low vaccination rates among older people, among other reasons, have allowed the virus to jump high borders and cause major policy changes and lockdowns.

In response, some Jews have left these countries permanently. Some became stuck overseas when lockdowns were initially announced, separating families.

The former education coordinator of Kehilat Shanghai — one of Shanghai’s organized Jewish communities — was among those finding themselves stuck abroad. She had to host Hebrew school classes remotely from the United States, and didn’t end up coming back. Although in-person events and programming were possible in China by March of 2020, most activities other than holidays and Shabbat dinners had stopped.

But “it hasn’t been a major exodus,” said Scott Pollack, a longtime member of Kehilat Shanghai, who decided to move his 80-year-old parents to the city with him from their home in California shortly after the pandemic began. “Our last major gatherings were Rosh Hashanah and Yom Kippur. Numbers were fairly strong, but not record numbers.”

For Shanghai’s progressive Jews — mainly expats from around the world who have come to Shanghai for work — the pandemic has raised a challenge: Before 2020, the community relied on traveling rabbis to lead those large holiday events. Leaders were in the middle of negotiations to bring in a part-time Shanghai-based rabbi to lead the community when the pandemic hit in 2020.

Now those plans are on hold as some speculate China and Hong Kong could remain mostly closed to the world until 2024, though China’s former chief epidemiologist has said that “in the near future, at an appropriate time, there will be a Chinese-style roadmap for living with the virus.”

The absence of professional clergy to lead the progressive community in Shanghai has encouraged more community involvement in services.

“It ended up being beautiful,” Pollack said, “the fact that members of the community stepped up and learned how to read part of the service that they never had to learn before.”

“It’s definitely interesting looking back at 2020 from 2022 to see how we moved on quite quickly, but also how now, we’re one of the last countries not able to have fully normal services and events,” said Hannah Maia Frishberg, Kehilat Shanghai’s current education coordinator. “We still have mask requirements, we still have this assumption that everyone is mostly vaccinated, that everyone has a green QR code.”

Last week, China saw the biggest uptick in domestically transmitted cases (those not detected by incoming travelers) since 2020 and is implementing some of its strictest measures since the pandemic began, restricting an entire province for the first time in two years. In Shanghai, all in-person events and gatherings — including this week’s Purim events — were postponed.

This year, leaders have gotten savvier with technology, said Josh Lavin, communications chair and secretary of the UJC board. And that played out in the group’s remote online offering, which included “more video effects and editing it to make it a video-first production,” he said.

The UJC has adapted its format enough times to be prepared for any shift in policy and plans to continue with a hybrid option, even during non-COVID times. It’s just become part of life in Hong Kong.

“Jewish people have gotten through tough times. We really have. And comparatively, this is tough but not even close,” Roschke said. “I’m very confident that the community will grow again. It’s not an easy time, but it’s not something we can’t handle. And as Jews, we know this.”