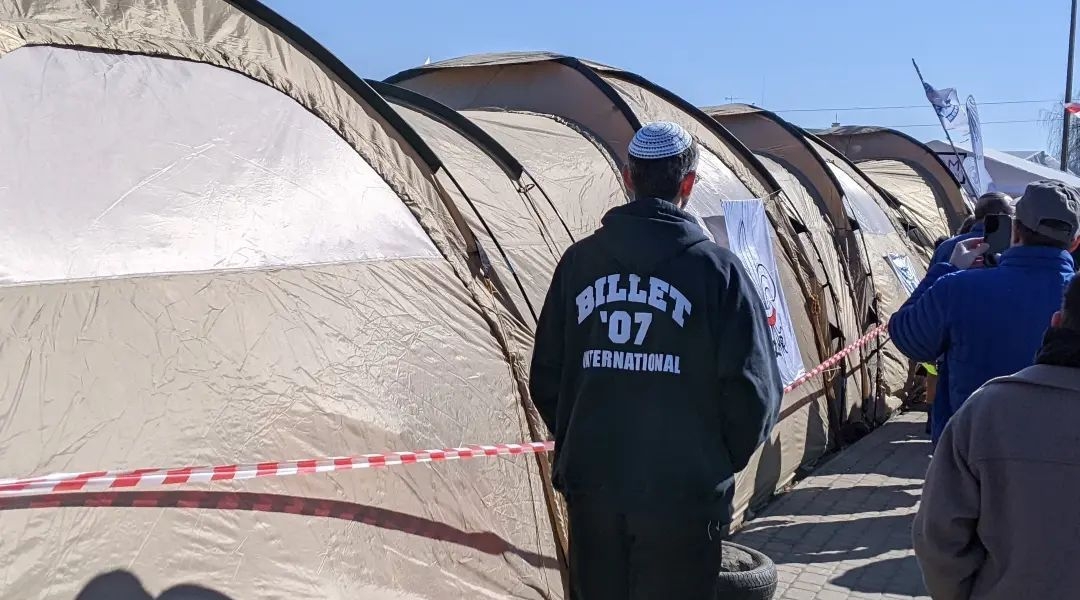 A tent city on the Polish side of the Medyka border crossing with Ukraine provides shelter and supplies for the refugees fleeing the war, March 14, 2022. (Courtesy Menachem Creditor)
Advertisement

“It was very overwhelming to see the magnitude of human suffering,” Rabbi Rachel Timoner, the senior rabbi at Park Slope’s Congregation Beth Elohim, told the New York Jewish Week. “People are in shock. What we saw were women and children who had left everything they had, who had left their homes, their communities and their loved ones, and in many cases, their husbands, fathers and sons. They had no idea where they were going to sleep, had been traveling for days and days, and were cold, hungry, and thirsty.”

During the three-day mission, the clergy distributed supplies, determined how best to help organizations working to aid refugees, and heard personal stories from those who have fled Ukraine in recent weeks.

During the mission — which was organized by UJA-Federation New York —  the rabbis visited shelters, clinics, soup kitchens and Jewish organizations on the ground. The institutions have been operating around the clock to help Ukrainian refugees who have fled to Poland since the Russian invasion began on Feb. 24.

On Monday, UJA-Federation announced a new round in emergency funding, bringing its grants to help Ukrainians to $8.1 million since the start of the war. (UJA-Federation is a funder of 70 Faces Media, the New York Jewish Week’s parent company.)

According to the United Nations High Commissioner for Human Rights, the number of Ukrainian refugees in Poland has already surpassed two million.

“Multiply [what we saw] by hundreds of thousands and millions of people,” said Timoner. “It’s very overwhelming to see that and so, to be there amongst colleagues, who were also trying to bear witness and committed to coming back to sharing what we saw to garner support for aid, that felt very meaningful.” 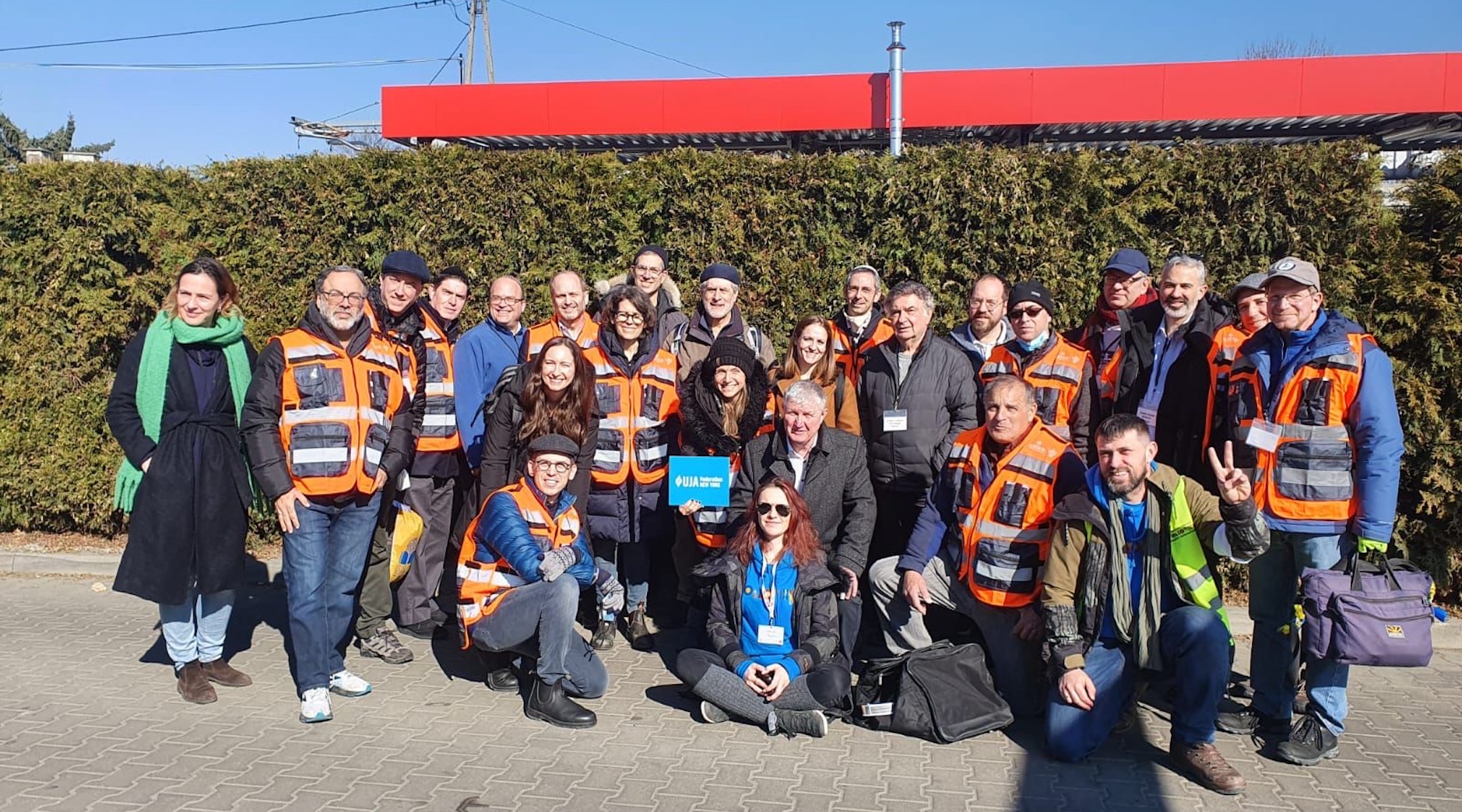 Rabbis from New York were in Poland from March 12 to March 15 to restock humanitarian supplies and visit with Jewish organizations serving Ukrainian refugees on the ground. (Courtesy Rachel Ain)

All of the rabbis reached by the New York Jewish Week noted the magnitude of suffering. And while some in the wider Jewish community have questioned the efficacy of such short-term missions, the rabbis who went to Poland spoke about the necessity of bearing witness to the tragedy and of amplifying the need for humanitarian aid for refugees.

Rabbis were asked by UJA on Tuesday, March 7 if they would be able to go on the trip the following Saturday evening. They had only a few hours to decide.

“I knew that there would be power in showing up,” said Rabbi Rachel Ain of Sutton Place Synagogue. “I also knew that, in this case, not only would I be showing up, but I would be able to understand and amplify the message and the situation on the ground that we might not be seeing in the news, because it’s hard to get personal stories.”

Some of the rabbis shared such personal stories on their social media throughout the trip. Timoner posted on Instagram about Katya, who said goodbye to her husband and left Ukraine with her sons, ages 4 and 9, as the fighting intensified. After three days waiting in the cold, the trio arrived in Poland, though they hope to continue to Israel where Katya’s mother lives.

“The idea that we could bring any kind of material aid to refugees or to people suffering in Ukraine was an obvious yes, even though I knew our impact would be very small,” said Timoner. “Just the idea of being able to have any impact at all and being able to offer any little bit of help was compelling.”

In the days leading up to the trip, Timoner put a call out to her congregation to donate items like diapers, feminine hygiene products, and women’s and children’s underwear. Within just three days, Timoner had collected six large bags of supplies to restock the refugee centers they visited. “For us to bring actual supplies and not money was what they needed,” she said. “They couldn’t get them otherwise.”

The group visited with organizations in the field that have been working with the UJA- Federation, the Joint Distribution Committee and the Jewish Agency for Israel to provide aid to refugees. They group also met with Jewish community leaders in Poland, including Rabbi Michael Schudrich, the Chief Rabbi of Poland; Jonathan Ornstein, the executive director of the JCC Krakow, and Tzvi Sperber, the director of JRoots, which organizes trips for young Jews to visit places of Jewish heritage, including many in Eastern Europe.

Though the cohort witnessed firsthand the suffering experienced by refugees at the border, many of the rabbis returned stateside with messages of hope.

“Despite it all, that’s a message of Judaism: We always hold out,” said Ain. We always remember the sadness; we break the glass at a wedding, we boo at Haman’s name, we leave unpainted corners of new houses recognizing that not everything is fixed in the world.”

“But we do under the context that tomorrow can be better than today,” she added. “And in the meantime, we need to be partners, with God and with each other, in making a better world.”

Rabbi Chaim Steinmetz of Congregation Kehilath Jeshurun on the Upper East Side also remarked on how meaningful it felt to witness so much Jewish aid during a European refugee crisis. “One of the most powerful moments was greeting a group of 40 Ukrainians who were about to get on a bus to the airport, and on their way to Israel,” he said. “It was a reminder that unlike 80 years ago, Jewish refugees always have a home. It was inspiring to see how the global Jewish family is there for them.”

On her social media, Timoner took photos of Israel’s “Rescuers Without Borders” tent, which she described as being the first tent refugees see when they enter Poland at the Medyka border. “When asked whether they serve only Jews, they said, ‘Selection is what they did 80 years ago here. We do not do selection. We serve all people,’” she wrote.

“When there is great evil in the world, sometimes it brings out great goodness,” Timoner told the New York Jewish Week. “We didn’t just witness evil and the effects of evil, we witnessed the beauty of what human beings are capable of in their generosity and in their caring, and that was inspiring.”

On Tuesday at 5:00 PM ET, UJA-Federation of New York will host a panel discussion featuring rabbis who took part in the mission. In addition to Ain, Robinson and Steinmetz,  they will include Rabbis Elliot Cosgrove of Park Avenue Synagogue, Menachem Creditor of UJA-Federation, Steven Exler of The Hebrew Institute of Riverdale — The Bayit and  Joel Mosbacher of Temple Shaaray Tefila.