All the Jewish Ukraine news you need to know 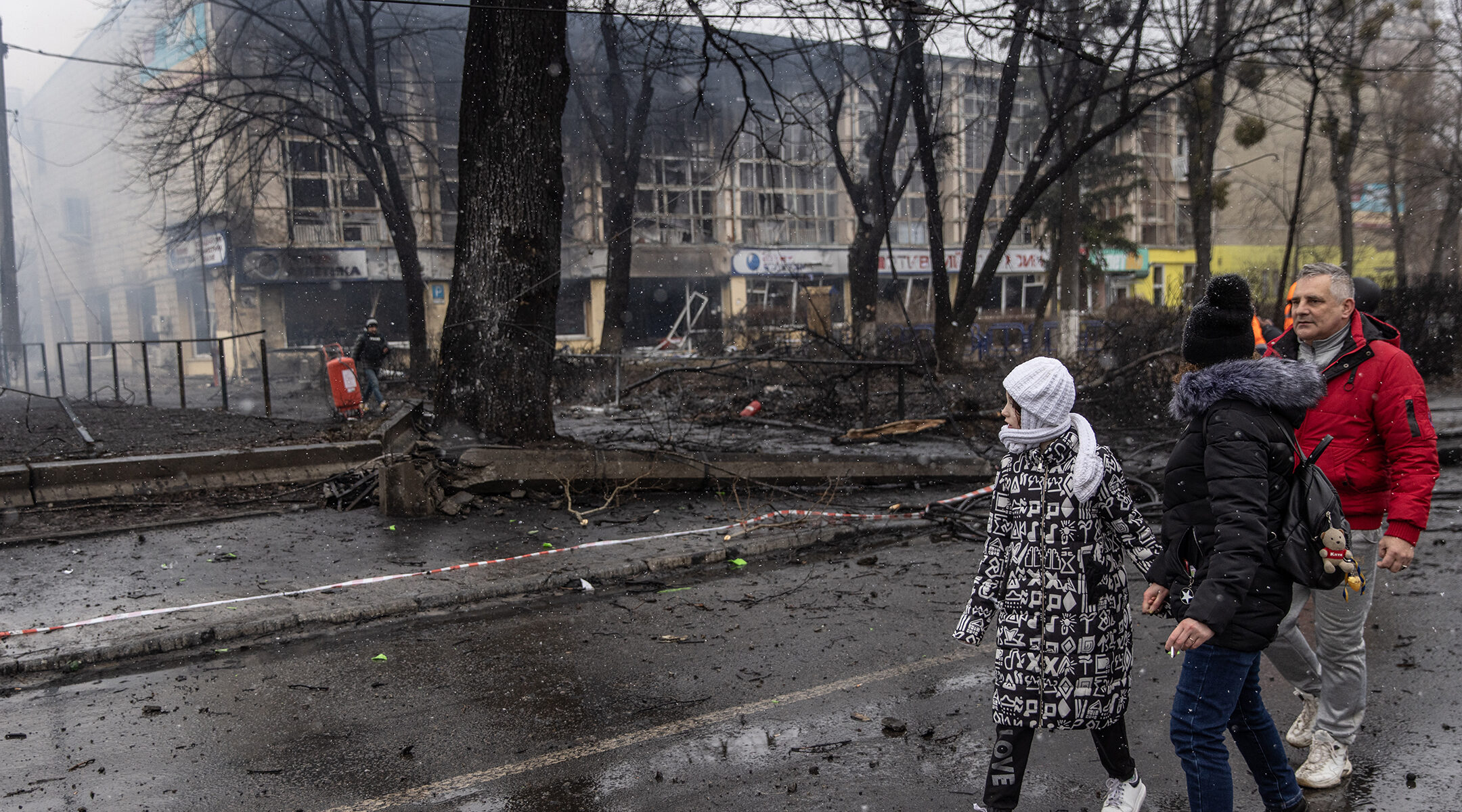 People walk past a damaged building across the street from a TV tower in Kyiv, Ukraine, March 2, 2022. (Chris McGrath/Getty Images)
Advertisement

(JTA) — The situation in Ukraine and Eastern Europe is changing by the minute, making it difficult to keep up. What we do know: the future of Jewish life in the region will likely look much different than it does now.

We’ve compiled all of our coverage on the ongoing crisis here, divided into categories, and we will update it regularly, in reverse chronological order.

Have questions that you would like to see answered in our reporting? Email us at tips@jta.org.

Refugees with Jacuzzis: The surreal life of 200 Jews at a 4-star resort in wartime Ukraine

These Messianic missionaries were at the Ukraine border, and now they’re coming to New York

From tefillin to troop training: Meet the Orthodox former IDF soldier on the front lines in Ukraine

In a Romanian resort town, Jewish children from Odessa celebrate Purim as refugees

Babyn Yar was his backyard. Now this 95-year-old Holocaust survivor has escaped Ukraine after a harrowing ordeal.

At Manhattan’s only Russian dual-language school, Jewish parents stand in solidarity with Ukraine

At the Moldova border, Jews from Odessa wonder when they’ll be able to return home

Jewish Ukrainians gear up for fierce Russia fight, alongside the ‘neo-Nazis’ they say Putin is lying about

In Moldova, Ukrainian Jewish refugees anxiously wait out the war in synagogues and Jewish centers

Long bus rides, temporary shelters and lots of phone calls: Inside the Jewish response to the mounting refugee crisis in Poland

In Brooklyn’s ‘Little Odessa,’ Jews from Ukraine and Russia find the war ‘terrifying’

Ukrainian Jews, scarred by a bloody history, find themselves refugees once again

In Ukraine, young Jews are torn between fighting for their country — and leaving for another

Despite danger and disruption, Ukrainian Jews prepare to celebrate Passover in public seders

War in Ukraine could put a crunch on ‘shmura’ matzah supplies

As many flee Ukraine, some rabbis have headed there — to celebrate Purim

Serafim Sabaranskiy, a Ukrainian Jew who enlisted to defend his country, dies in a Russian airstrike

Yeshiva U students land in Vienna to help Ukrainian refugees

Hundreds of Ukrainian refugees have landed in Israel. Thousands more could follow.

Prayers for peace: How the Jewish world is responding to Russia’s invasion of Ukraine

In appeal to Israel, Zelensky invokes the ‘final solution’: ‘You cannot mediate between good and evil’

Zelensky to German parliament: Russia’s war has made the phrase ‘never again’ meaningless

For many Jews watching Ukraine’s war, Volodymyr Zelensky is a ‘modern Maccabee’

Volodymyr Zelensky was a Jewish comedian. Now the world’s eyes are on him.

Russian Jewish oligarchs step down from board of Genesis Group, the Jewish philanthropy they helped found

Israel is setting up a $6.4M field hospital in western Ukraine

After hitting a cap, Israel will allow in Ukrainian refugees ineligible for citizenship if they have local relatives

Zelensky to speak to Knesset members

Ukraine asks Israel to mediate in war with Russia

‘There’s a Holocaust going on,’ Chuck Schumer says in urging assistance for Ukraine

This year, I am a refugee spending a joyful Passover in Berlin. Next year in Kharkiv.

The themes of Passover, and the bonds of history, tie our struggles to those of Ukrainian Jews

For a Polish Jew like me, the war on Ukraine is about our shared futures

Ukraine, Russia and the unbearable lightness of ‘never again’

Jews and non-Jews share a bloody history in Ukraine. But there are reasons for hope.

The Jewish post-rescue era ended with the war in Ukraine

My history with my native Ukraine is complicated and often painful. But I pray for the safety of my friends and family.

Ukraine’s Jewish history is filled with trauma. But while the past is prologue, it’s not destiny.

What Putin’s talking about when he talks about ‘denazification’

The years I spent in Ukraine taught me a very Jewish concept: hope

My Jewish family fled Kyiv in 1989. My heart breaks for the city today.

More info on the Jews of Ukraine

Here’s how to help the Jews of Ukraine

Explainer: Who are Ukraine’s Jews, and how is Russia’s invasion affecting them?