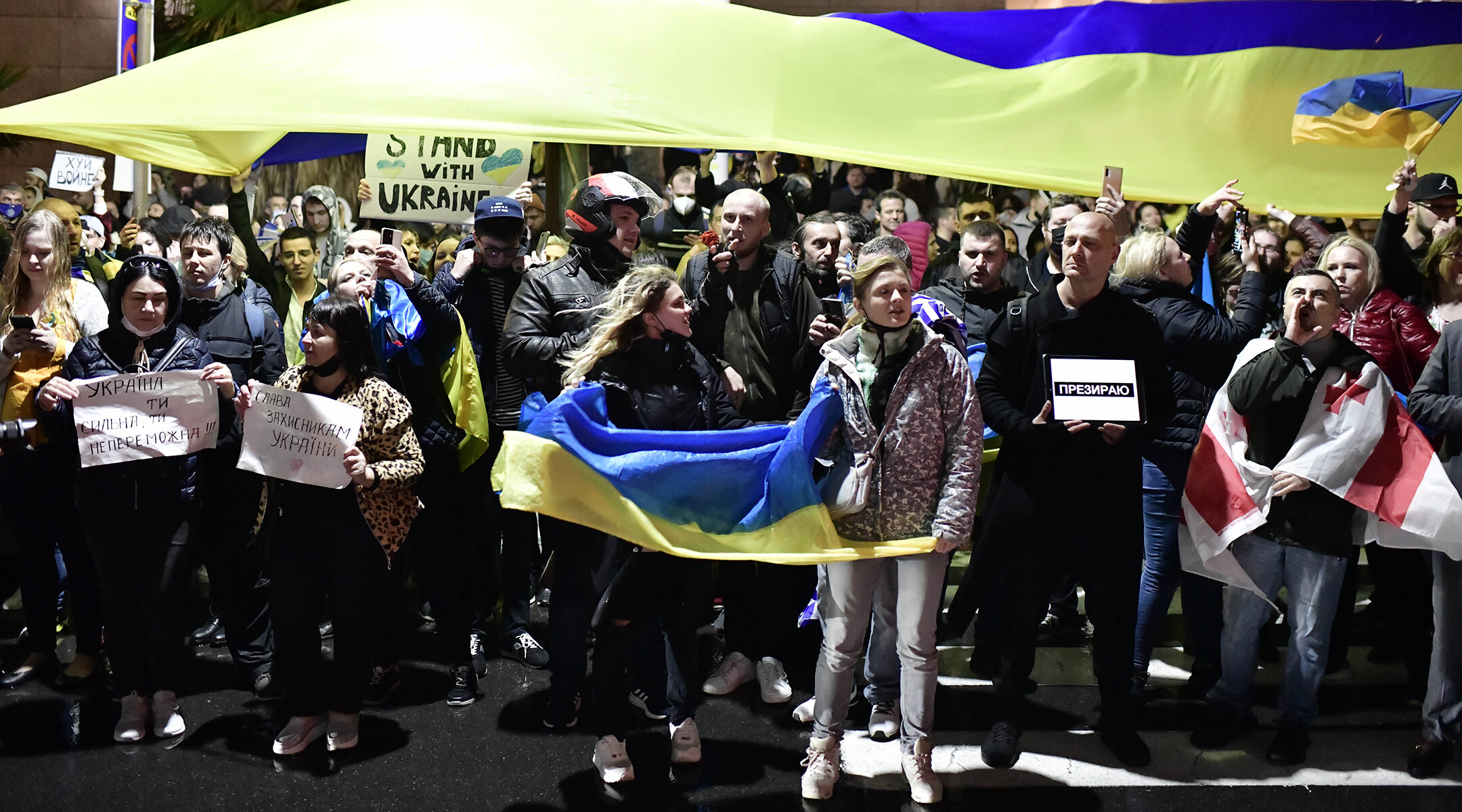 Demonstrators carry placards and flags during a protest outside the Russian Embassy in Tel Aviv, Feb. 24, 2022. (Tomer Neuberg/Flash90)
Advertisement

HAIFA, Israel (JTA) — The Russian invasion into Ukraine happened about 1,600 miles north of this port city in Israel, but many of its Russian speakers are experiencing the conflict as though it’s unfolding next door.

“I put on the radio and heard the news this morning. I’ve been following in shock and distress all day,” Alex Plotkin, a 46-year-old factory manager who was born in Belarus and whose wife was born in Ukraine, told the Jewish Telegraphic Agency on Thursday even as he was listening through a Bluetooth earpiece to radio updates.

Amid the weeks-long escalation that led up to the invasion, Ukrainian flags have gone up in multiple residential homes in Haifa, where immigrants from the former Soviet Union account for at least 23% of the city’s population of approximately 280,000 residents, according to government statistics.

But that act of solidarity with Ukraine is only one visible response in a range of reactions that are as diverse as the minority where they are occurring, ranging from disinterest to passionate advocacy for either party.

Despite their differences, many Israeli Russian-speakers from both sides of the Russian-Ukrainian border — as well as from other former members of the Soviet Union — seem to share a concern and distaste for loss of life in either country.

Plotkin, whose native country of Belarus is an ally of Russia and a Russian base of operations for the invasion into neighboring Ukraine, is worried for his wife’s relatives in the Ukrainian capital of Kyiv, he said. But, he added: “I understand the Russians not wanting Ukraine to become a NATO member on Russia’s doorstep. There are no bad and good guys in this story.”

Oleksander Gominyuk, a pensioner in his 70s who moved to Israel from Kyiv 22 years ago, makes no attempt at impartiality. He would “kill the bastard if I could,” he said of Russian President Vladimir Putin.

“But first I’d carve a swastika into his forehead,” he added, pantomiming that action. (During World War II, partisans are believed to have sometimes done this to captured or dead German soldiers. Quentin Tarantino included the act in his 2009 film “Inglourious Basterds.”)

His voice cracking with emotion, Gominyuk added in broken Hebrew that he has a daughter in Kyiv who “is afraid for her life. I don’t need to follow the news. My daughter tells me everything and we talk all the time.”

Letting out an expletive, Gominyuk took off glasses with lenses as thick as beer-mug bottoms and wiped his eyes before returning to loading into the trunk of his 20-year-old Peugeot groceries from a Rosman deli. It’s one of 18 franchises in the Haifa area alone of a non-kosher chain for Russian speakers that was established in 1996.

His fury is shared by many in Israel, where more than 1 million immigrants from the former Soviet Union have settled since its collapse in 1990, mostly from Russia, Ukraine and Belarus. On Thursday night, hundreds of protesters gathered outside the Russian embassy in Tel Aviv, carrying Ukrainian flags and chanting political slogans and curses against Putin.

While no Russian flags were visible on display in Haifa, there are Israeli Jews who are supporting the Russian side just as passionately.

Perhaps one of Israel’s most recognizable Putin advocates is Semyon Grafman, a 46-year-old comedian and YouTube star from Bat Yam near Tel Aviv who was born in Dnipro, an eastern city of Ukraine, and immigrated to Israel in 1990. 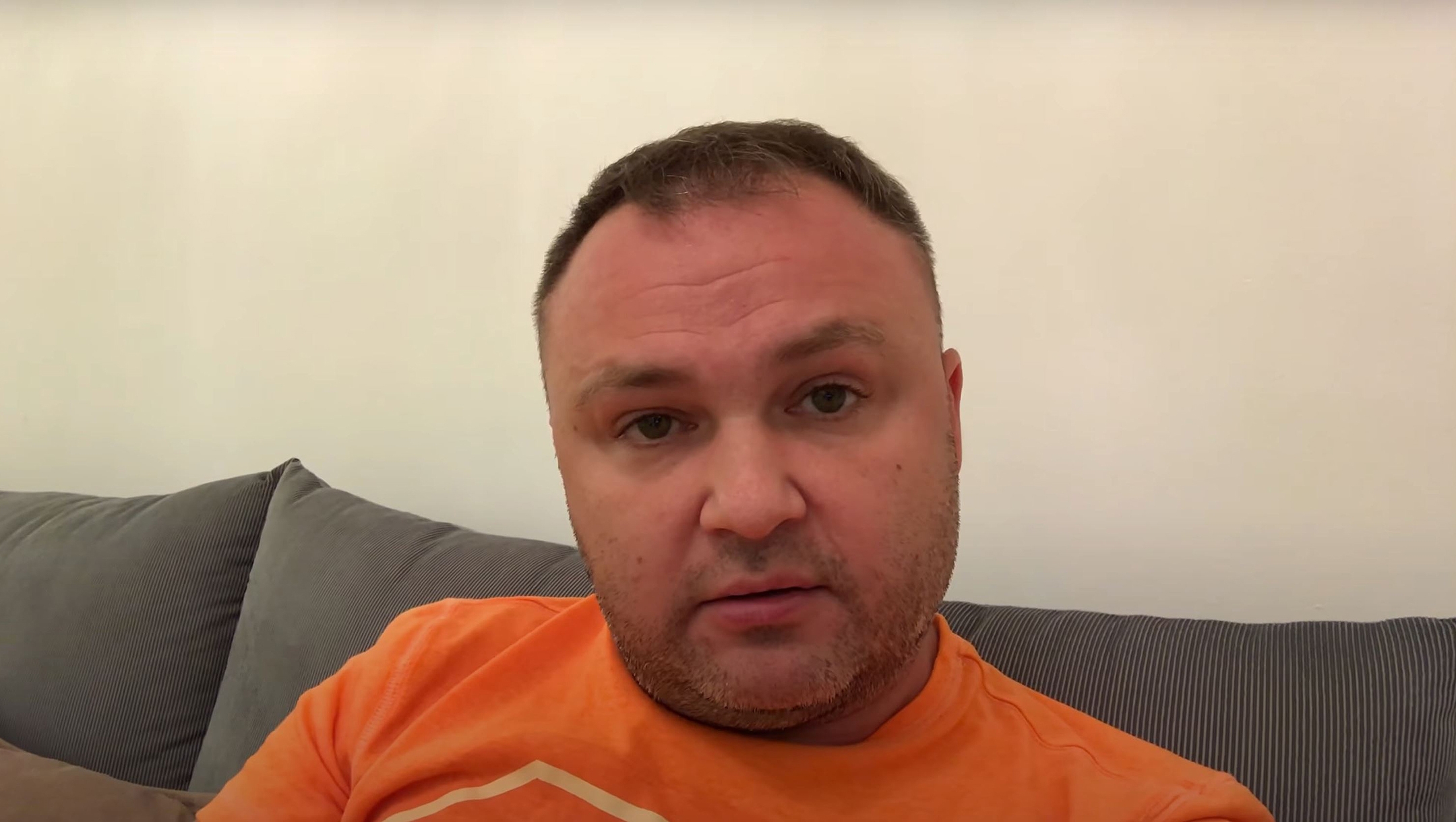 “Israel strikes in Syria in defiance of international law every time a foreign country introduces weapons there, and I hope this continues. It’s our existential right. In Ukraine, Putin is doing the same,” he said on Channel 13.

Vera Veinberg, a tourism operator from Eilat who was born in Crimea, the part of Ukraine that Russia annexed in 2014, appeared to express glee at the Russian invasion, which she described as payback for bombings by Ukraine in territories that have been held by pro-Russian separatists since 2014.

“Ukraine could’ve ended this anytime the past eight years but chose to accuse the Russians of aggression. Well, Russia is finally waging war eight years too late, but what a show,” she wrote on Facebook.

“I blame the United States,” said Ella Bolgak, a 33-year-old mother of two from Kiryat Chaim, a northern neighborhood of Haifa, and dental nurse who was born in Mykolaiv near Odessa in southern Ukraine. “If it hadn’t pushed Russia away from NATO, if it hadn’t extended membership to Ukraine, all of this could have been avoided.”

Bolgak left Ukraine when she eight years old for Germany and lived there until she made aliyah — Hebrew for immigrating to Israel under its Law of Return for Jews and their relatives — when she was 21.

Even so, Ukraine is close to Bolgak’s heart, she said.

“I have a grandmother, who’s 92, living in Mykolaiv. And I worry for her. And she worries for a cousin of mine who lives in Mykolaiv because she fears he will get drafted into the army. So what’s happening there affects me personally,” she said. “I’m horrified by the violence of Russia. But I’ve lived outside and seen enough to understand both angles. There are no bad guys and good guys here.”

One of the emotions Bolgak is feeling is relief about living in Israel, she said.

“I see in Russia there’s no single voice of opposition. In Ukraine there’s nationalism pushing them to make bad decisions. I’m happy my children are growing up here, away from that craziness,” she said while pushing her daughter on a swing at Haifa’s Achi Eilat park, named for an Israeli ship that Egyptian warships torpedoed in 1967.

Centuries of antisemitic persecution of Jews by ethnic Ukrainians and Russians, as well as the more recent collaboration of many Ukrainians with the Nazis and the brutal repression of Jews in the Soviet Union, have tempered the solidarity that many Jews, and especially the ones living in Israel, are able to feel with either party, several immigrants to Israel told JTA.

Like Bolgak, Plotkin, the factory manager, also spoke of feeling simultaneously connected to the conflict because of his roots and relatives suffering in Ukraine, and feeling detached because his identity is more firmly tied to Israel than to that part of the world.

“This is my home, not back there. I’m not Belarusian, my wife isn’t Ukrainian. We are Israeli,” said Plotkin, who wears a large star of David pendant. But he is “deeply sorrowed by the great human tragedy happening there. Brethren taking up arms. Sister nations, joined by language, culture, worldview and family ties. I mean, it’s truly tragic even if you don’t come from that part of the world.”